I spotted today’s estate pipe on eBay a few weeks ago. I’ve worked on several John’s pipes over the last year or two and have been impressed with their overall quality, so I threw in a bid, which turned out to be sufficient to add the pipe to my refurb box.

Looking at the auction pics, this pipe seemed rather “Bing-ish” to me – the thin pencil shank and Dublin bowl reminded me strongly of the Merchant Service pipes favoured by Bing Crosby. In person, the shank is a bit too short for Bing, but as genuine Merchant Service pipes are rather scarce on the estate market, this John’s Extra is close enough for me.

This series of pics shows the pipe as it looked when it first arrived on the worktable. As you can see, the stem was thoroughly oxidized, to the point of almost obscuring the circled “E” logo on its left flank. There was also some tooth chatter and small marks on and around the button.

The stummel itself was in pretty good shape, with only a light cake in the chamber and a layer of dust and grime on the exterior of the briar. Where the stummel fell short of the mark was its multiple small putty fills that had turned almost white against the darker briar. These really stood out and would need to be addressed during the refurbishment. 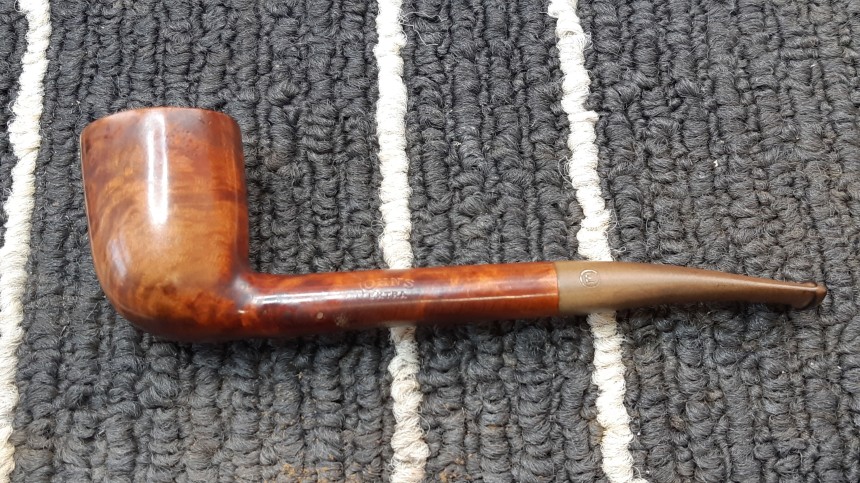 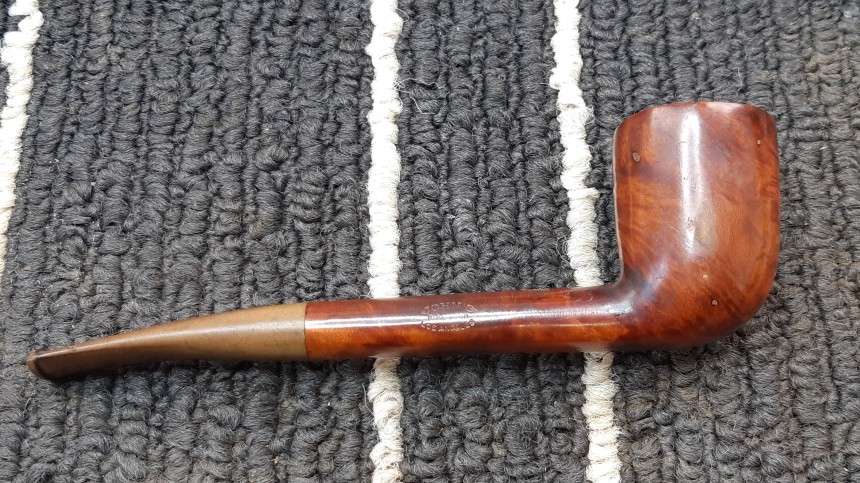 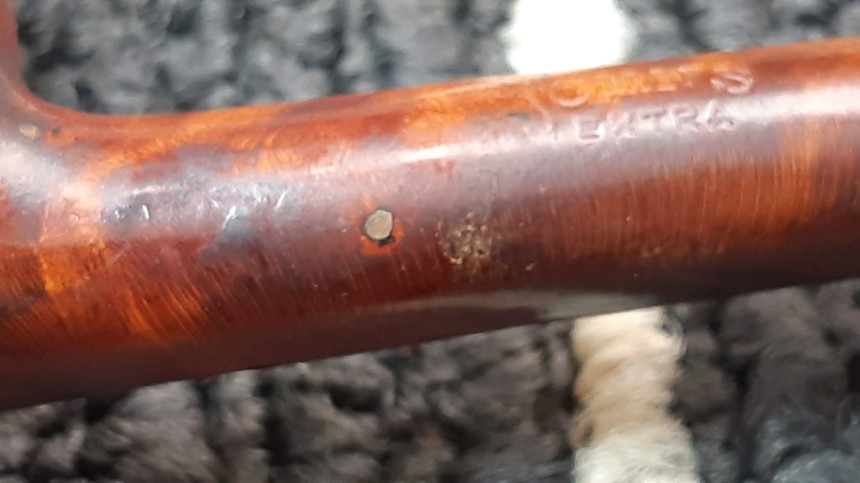 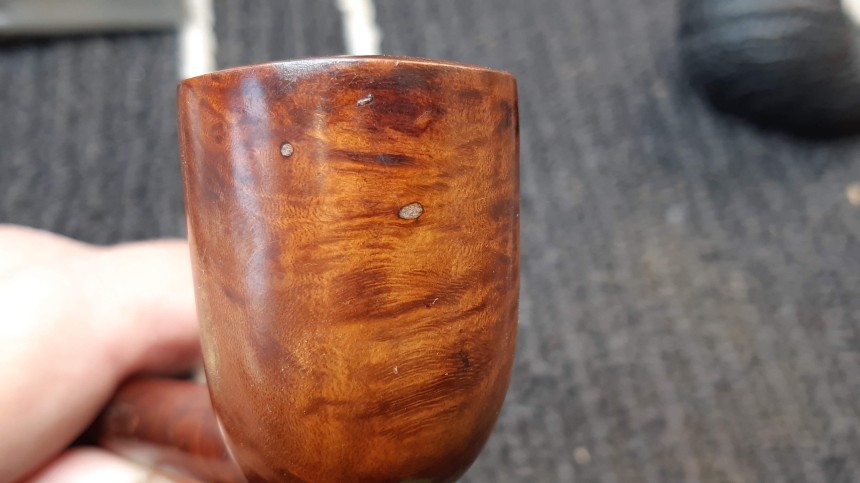 All of the stamps on the pipe are nice and clear. The left shank is marked “JOHN’S” over “EXTRA”, while the right flank is stamped “JOHN’S” over “PIPE SHOP” over “LOS ANGELES” and a shape number. “433”. On the underside of the shank near the stem junction is a small circular “MADE IN ENGLAND” stamp. The stem carries the aforementioned “E” in a circle on its left flank. 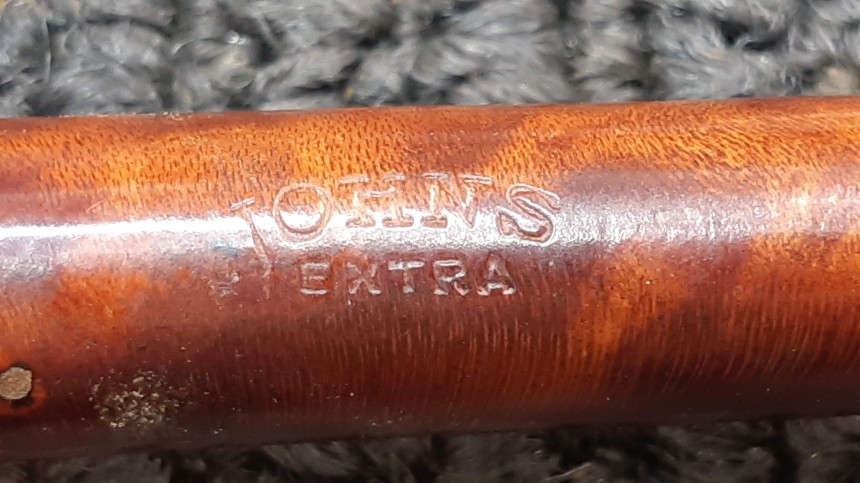 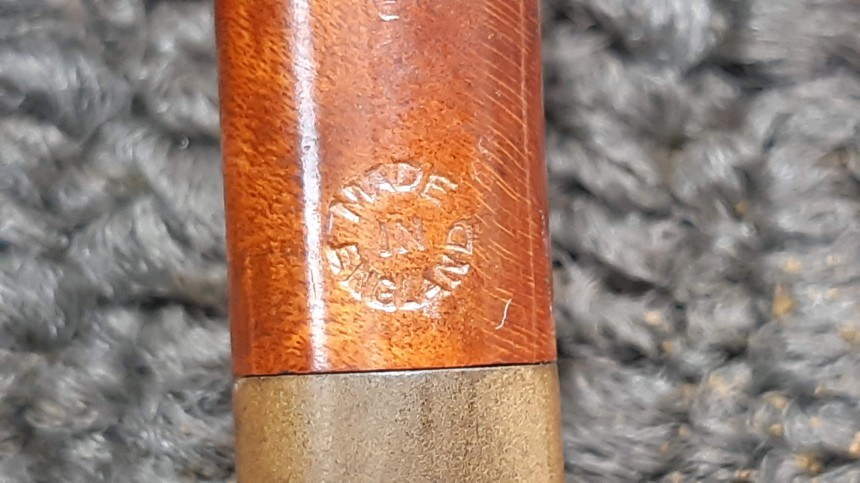 For those unfamiliar with John’s Pipe Shop, it was a fixture of Old Downtown Los Angeles from 1908 until its closure in 1980. John’s didn’t make any pipes themselves; instead, they contracted with existing pipe houses for their products, which then got stamped with the John’s logo.

Somewhat ironically, this John’s pipe is the same shape number, 433, as one I restored back in March of this year, which Comoy’s describes as a “Dublin, 1/8th bent”. That John’s Silver Mount 433 carries the same circular “Made in England” COM stamp, which Comoy’s first used in about 1910 but more commonly in the 1930s. This John’s Extra, then, dates from the same period, and while the briar used here isn’t as striking as that used on the Silver Mount, the stamps are in much better condition.

Moving on to the restoration work, I started by dropping the oxidized stem into a bath of Oxyclean and warm water to raise the oxidation to the surface. While the stem soaked, I reamed the tobacco chamber to remove the old cake. The chamber’s conical shape made it much more practical to use sandpaper wrapped around a marker for this task instead of my U-shaped Castleford reamer set. The chamber was in excellent condition under the old carbon layer.

A few pipe cleaners dipped in alcohol cleaned out the shank and airway. It was rather clean in there, evidence of a fastidious previous owner.

The pipe cleaners removed the old tars from the shank but didn’t quite erase the aroma of tobaccos past, so I packed shank and bowl with cotton wool and filled the pipe with alcohol and let it sit overnight. The pipe cleaner you see sticking out of the shank runs the whole length of the rather long airway and helps move alcohol from the bowl to the mortise at the shank end. 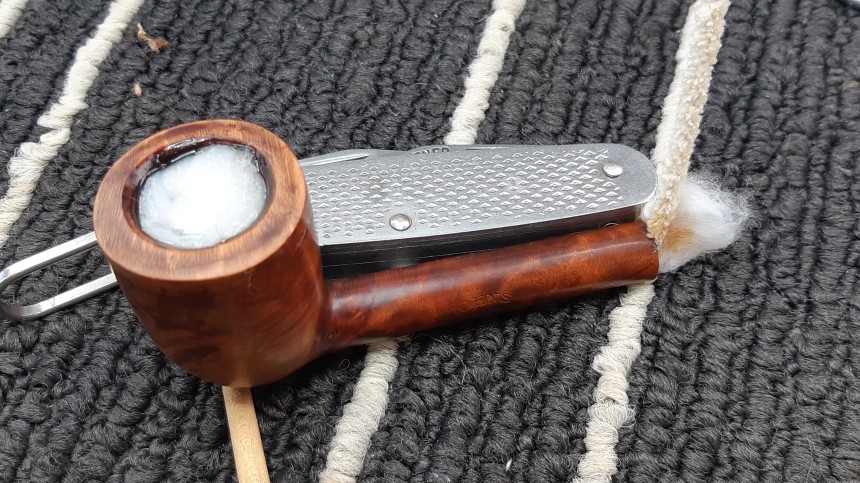 I snapped this pic directly after filling the pipe with alcohol. Already you can see some discolouration in the cotton wool. 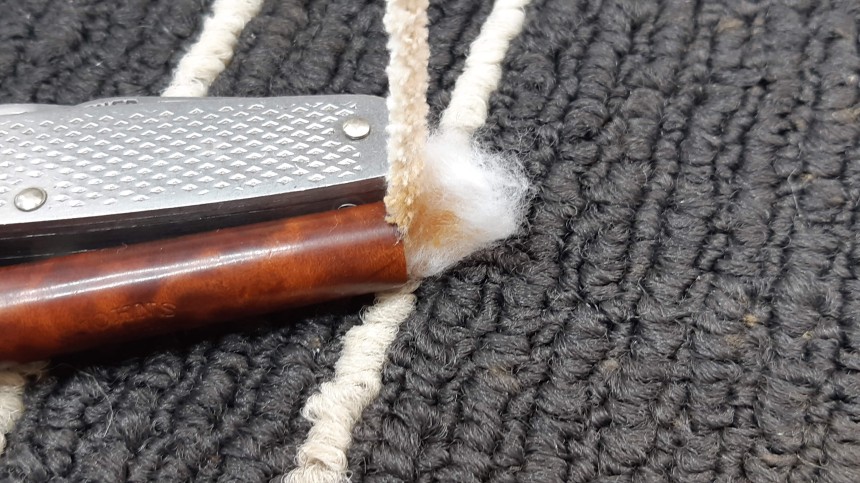 The next day, the alcohol had done its job dissolving the tough, deeply-ingrained tars and moving the contaminants into the cotton wool and pipe cleaner, which had turned quite dark. 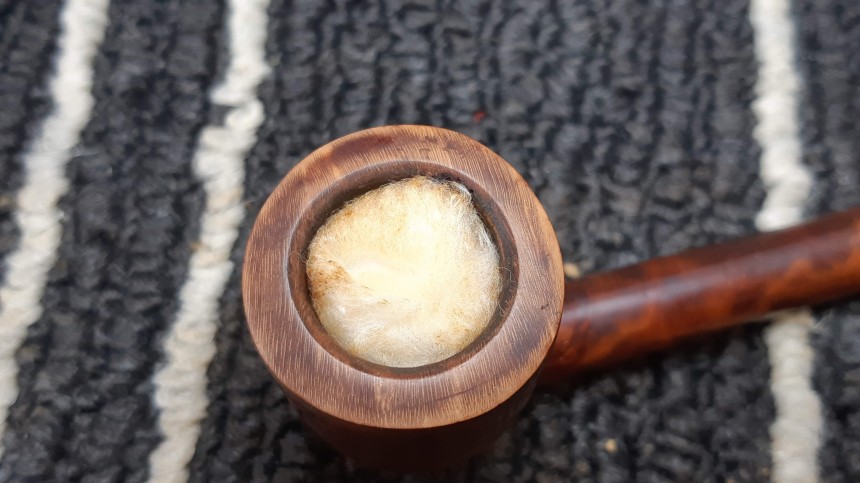 I removed the cotton wool and pipe cleaner from the stummel and tidied up the internals with a fresh pipe cleaner before setting the stummel aside to rest and dry completely. While it sat, I turned my attention to the stem.

I pulled the stem form the Oxyclean bath and scrubbed it down with 0000 steel wool and Magic Eraser to remove the now soft layer of oxidation. I avoided scrubbing the logo directly as I didn’t want to damage the marking.

The stem is quite small, and was therefore a bit tricky to hold onto while scrubbing. This pic shows that there was still a fair bit of work to do to remove the stubborn oxidation at this point, but I’d complete the stem rehab after mounting it back onto the stummel. This not only gave me a bigger handle to hold onto but also ensured that I did not round over the leading edge of the stem face. 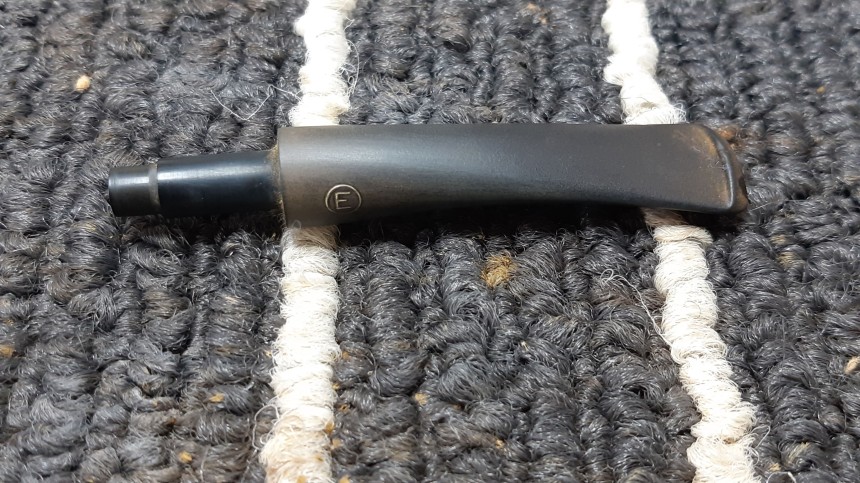 I worked on the stem with various grades of sandpaper, from 220 through 2000 grits, to remove the last of the oxidation and smooth out the tooth dents and other marks.

The stem was now looking good, but those white fills in the briar were really distracting and pulled down the entire appearance of the pipe. After cleaning the exterior with alcohol on a cotton pad, I used a simple technique to address the fills. First I went around the stummel with my darkest stain pen, colouring all the fills dark brown. Them to make sure the fills stayed dark, and to fill any depressions created by shrinkage of the putty over time, I covered each fill with a drop of clear CA glue. 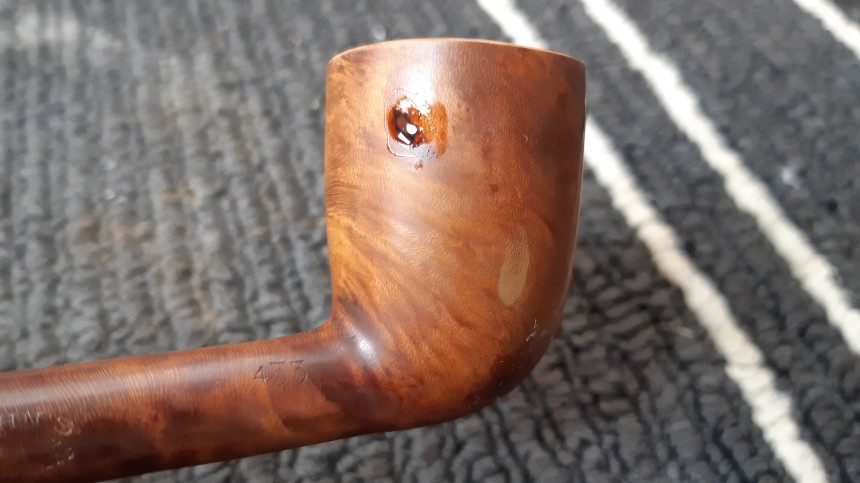 After the glue had cured, I smoothed out the patches then went over the entire pipe with wet sandpapers in 400 – 2000 grits to erase sanding scratches and even out the finish in preparation for fresh stain. 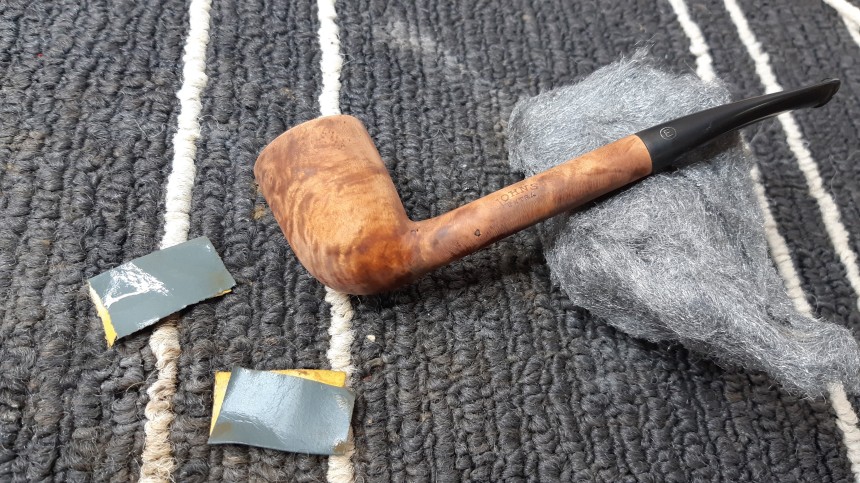 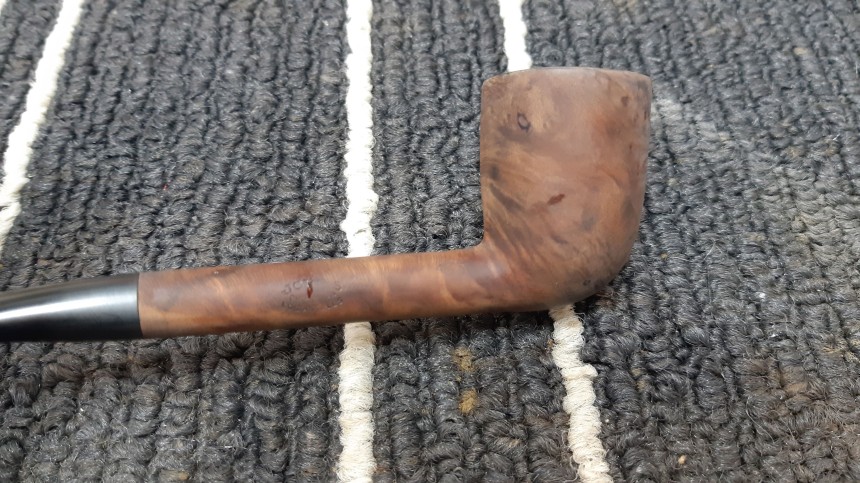 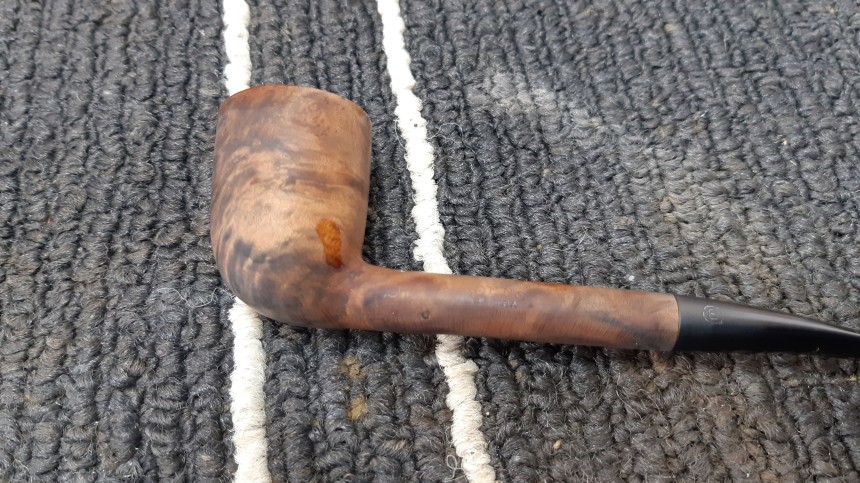 I stained the briar first with Fiebing’s Dark Brown leather dye. This helped restore the original look of the pipe but a few fills still stood out too much for my eye, so I hit the briar with a darker blend of Dark Brown and Black leather dyes to push the fills further into the background. 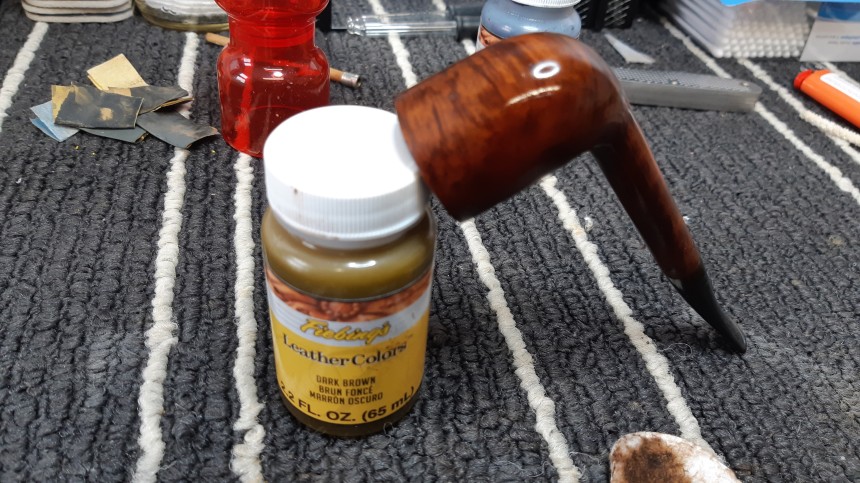 I let the dye dry completely then hand buffed the briar with a towel to remove any excess form the surface. Pleased with the new look, I wiped the stummel with a bit of mineral oil to help set the new stain and inject some moisture into the old briar.

This old John’s Extra was looking good at this point. Just before final polishing, I took a few minutes to refresh the stem logo. I dabbed in some white paint, let it dry, then carefully scraped off the excess.

Then it was off the the buffer for a run of Red Tripoli and White Diamond compounds followed by several light coats of Carnauba wax.

I am quite pleased with the results of this refurbishment. While one or two of the larger fills still show, they are now shades of brown instead of glaringly white. The refinished briar glows with vitality and the original Vulcanite stem is once again a deep glossy black against which the stem logo really pops. Just as importantly, the pipe is now clean inside and out and is ready to jump back into action with a new piper. Not bad for a pipe that is likely pushing 90 years old!

This lovely old pipe has already gone to a new owner. Whether he fills the bowl with C&D’s Crooner (purportedly one of Bing’s preferred blends) or with another favourite tobacco, I am certain that this Comoy’s made Johns Extra will serve him well.

Thanks for joining me for another estate pipe restoration. I hope you enjoyed following along. Until next time, Happy Piping! 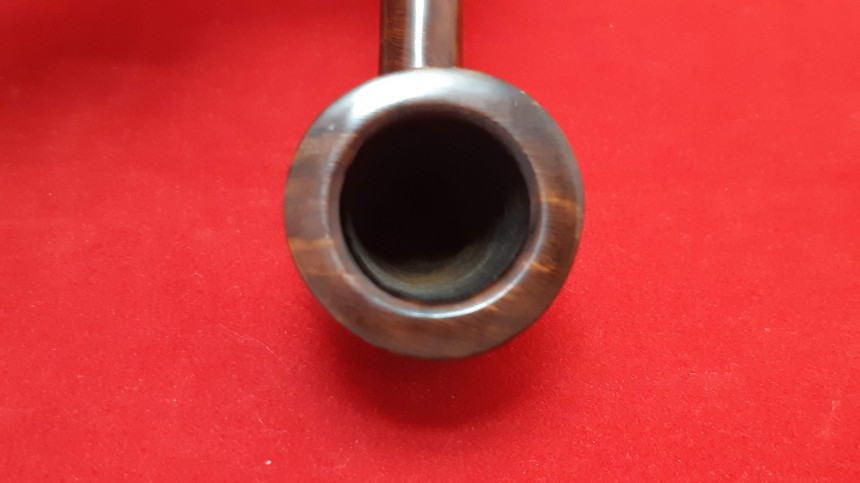 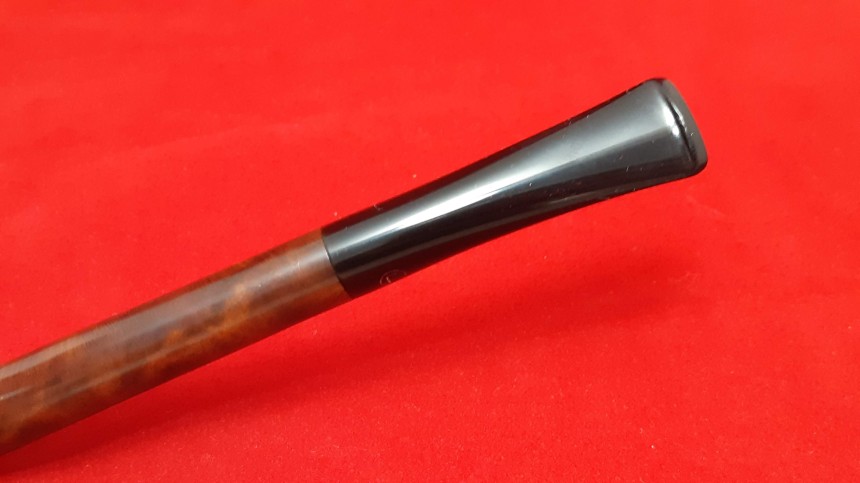 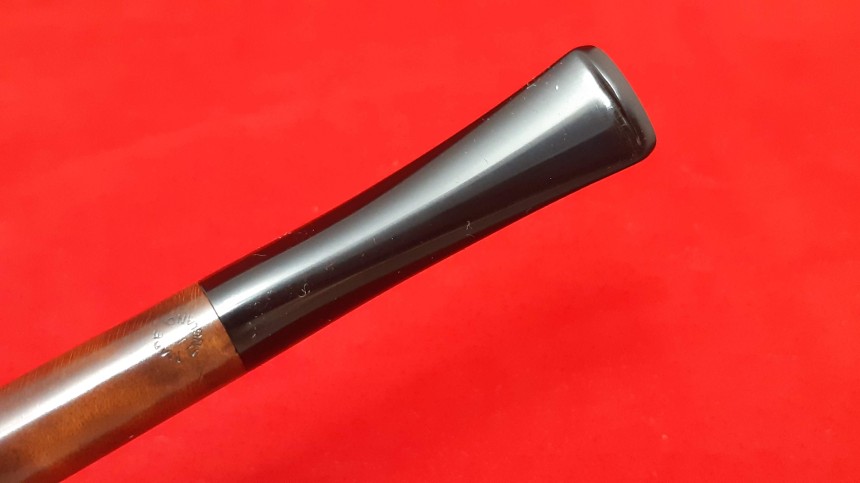 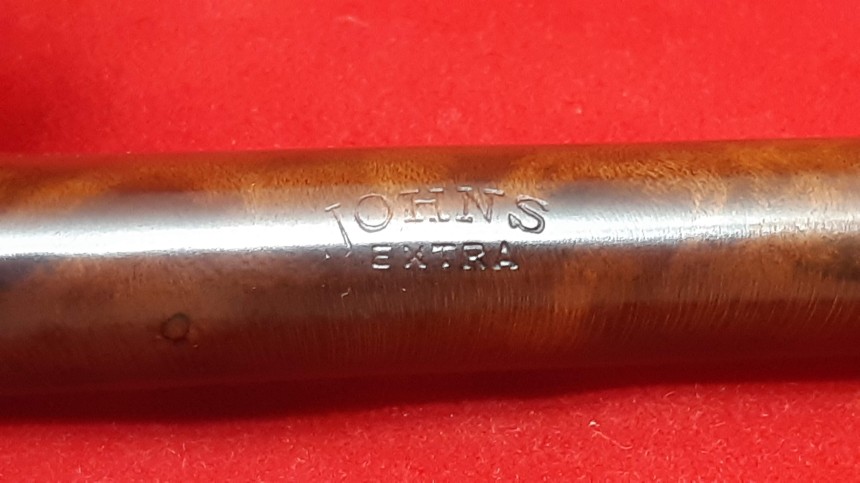 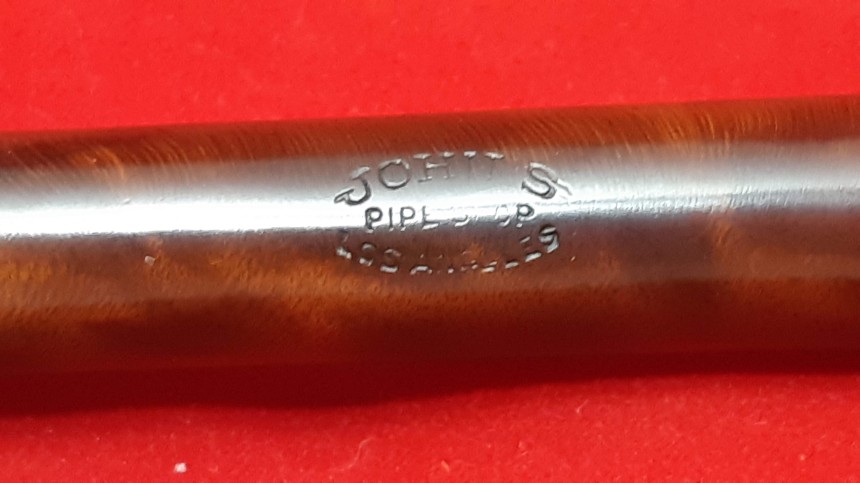 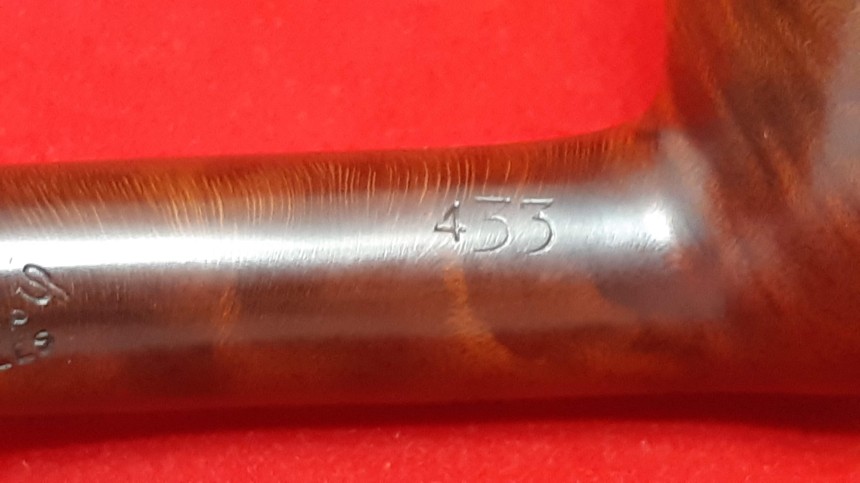 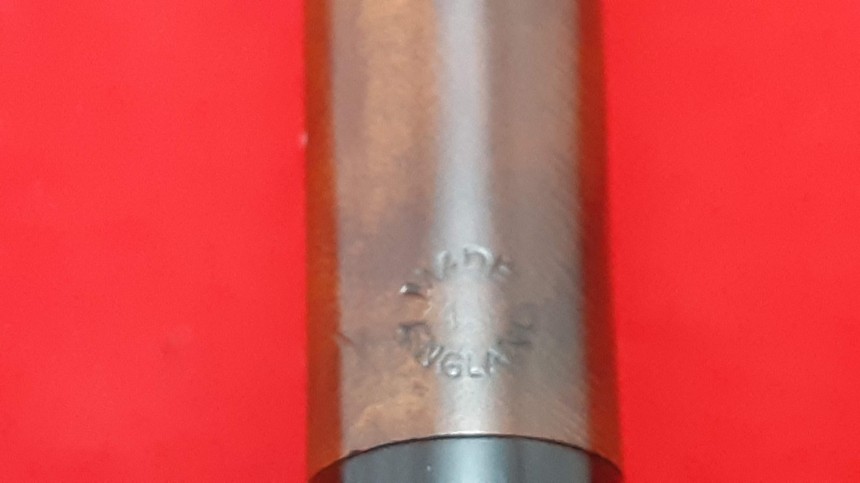 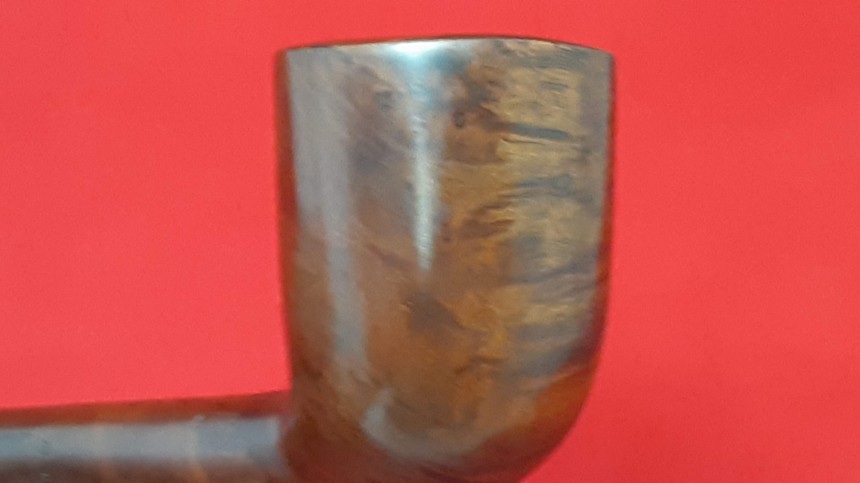