I found this Harcourt (made by Preben Holm for Dunhill in the late 1970s and early 1980s) on a recent wander through a local antique mall and couldn’t pass it up. This pipe has beautiful lines – a long, slender bowl shaped like a Tulip flower, plateaux rim and shank end and lovely vertical flame grain.

The briar was in very good shape. The stem, however, presented some issues – the vulcanite was heavily oxidized, and there was a deep tooth dent on the underside of the bit. The stem was also loose in the shank mortise, threatening to let the stummel drop away. 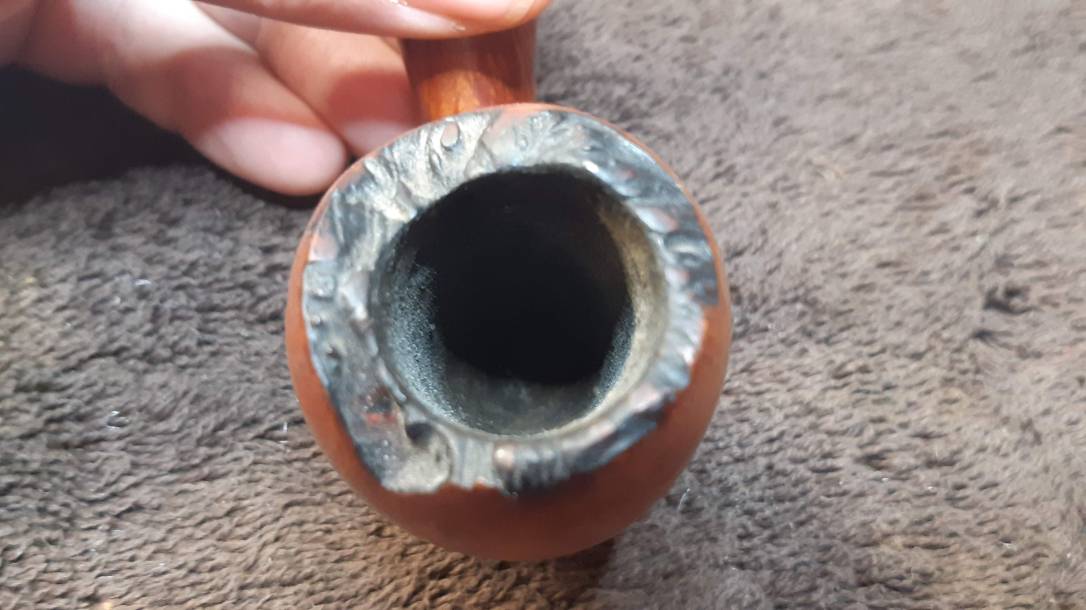 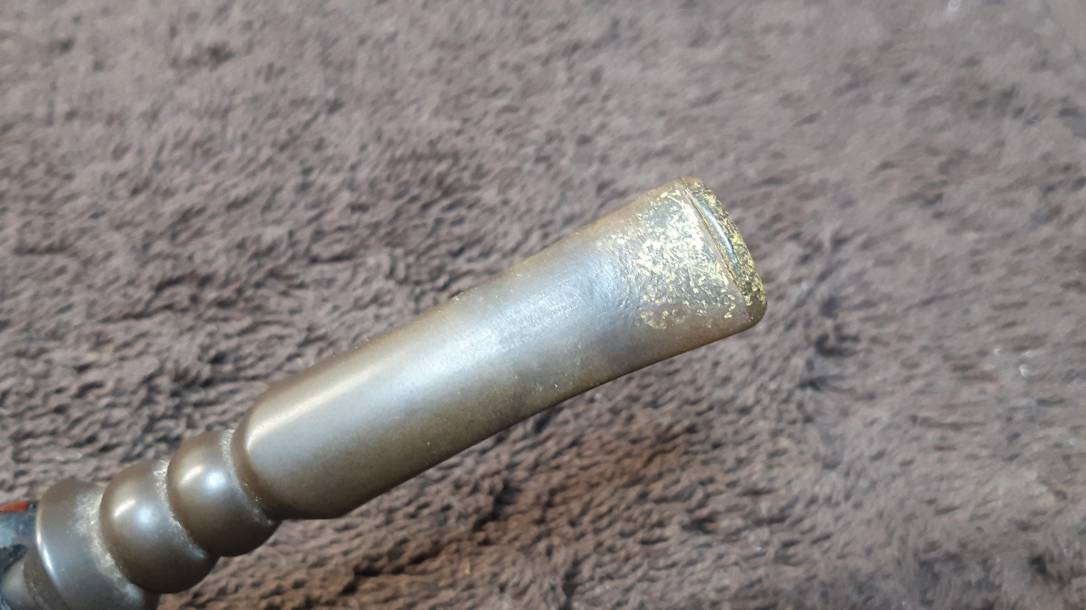 The underside of the shank is stamped “B” over “HARCOURT” over “HAND CARVED” over “IN DENMARK”. Preben Holm marked these pipes with a letter grade, A, B, C or D in ascending order. The pipe on my table, therefore, is a mid-grade Harcourt, though still without fill or flaw. I think it got a lower grade due to a slight unevenness in the vertical graining.

I started work on the pipe by gently reaming the old cake from the bowl. The chamber is deep and relatively narrow, so my Castleford reamer bit were of little use here. Instead, I used a scrap of sandpaper wrapped around a Sharpie. The chamber was in excellent condition underneath.

A few pipe cleaners and cotton swabs dipped in alcohol cleaned the shank and airway. I cleaned the exterior of the stummel with alcohol on a cotton pad to strip away the dirt and old wax. 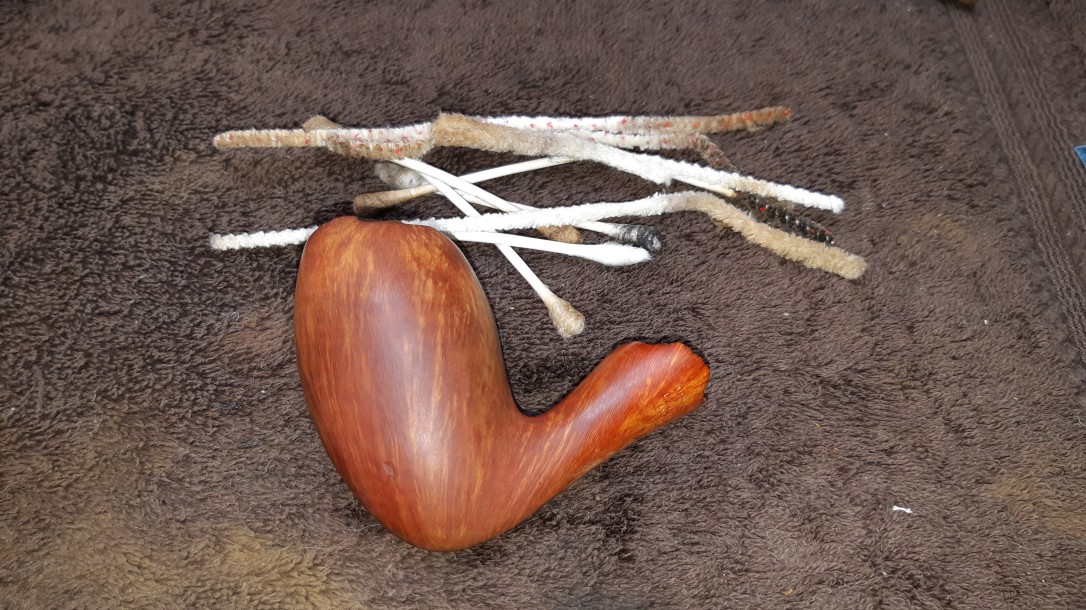 During the cleaning I found a dent in the briar that would need steaming. You might be able to see it in the last pic above – about a third of the way up the left flank of the bowl. This series of pics show a closeup of the damaged area before and after applying steam using a damp cotton pad and an electric soldering iron. 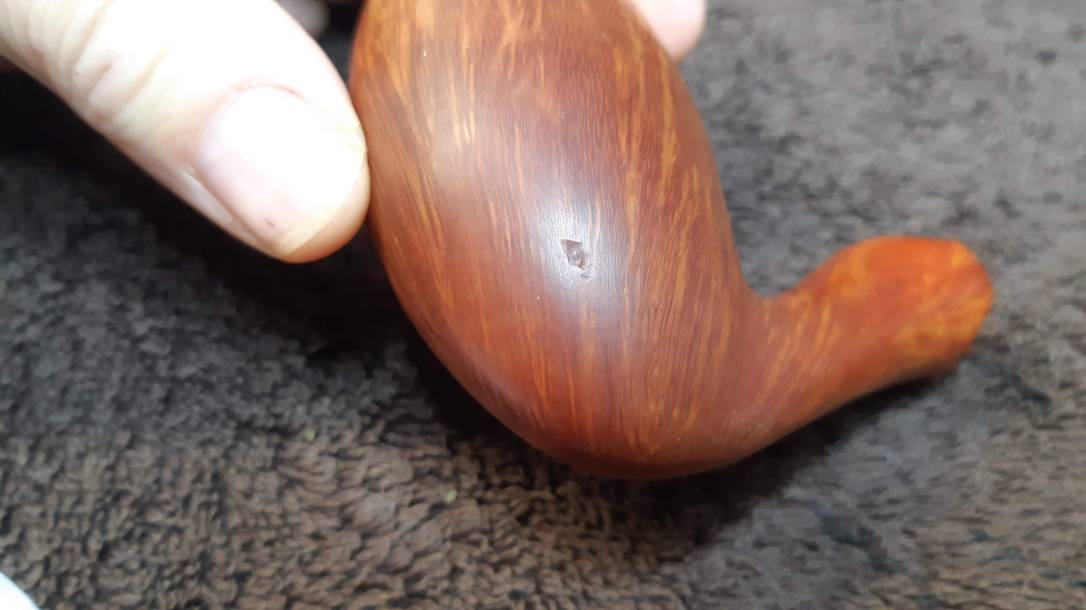 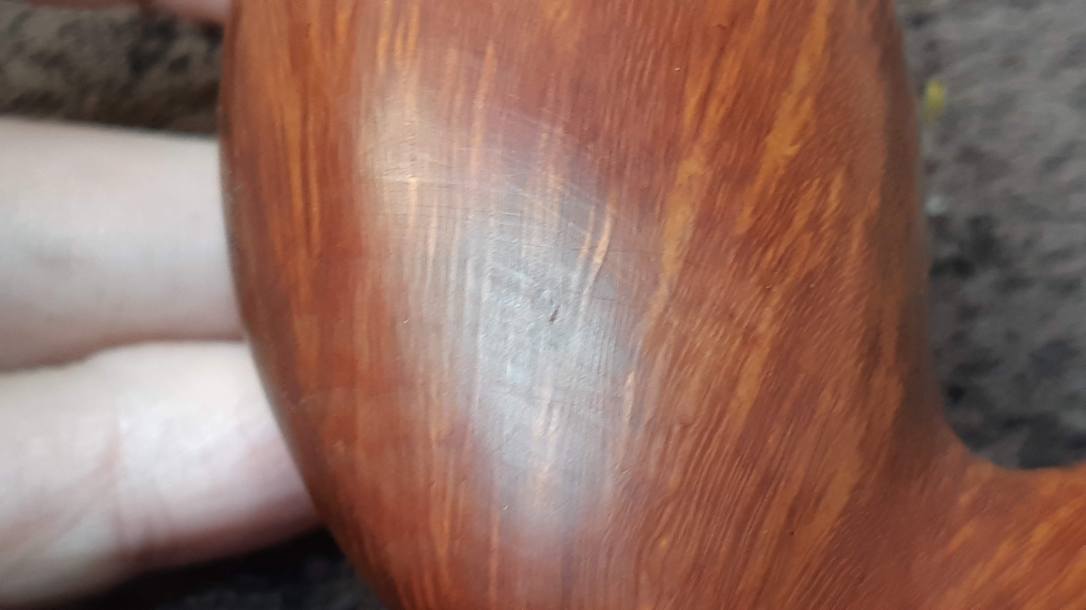 After raising the dent, I smoothed and polished the entire stummel with 800 and 2000-grit wet sandpapers. 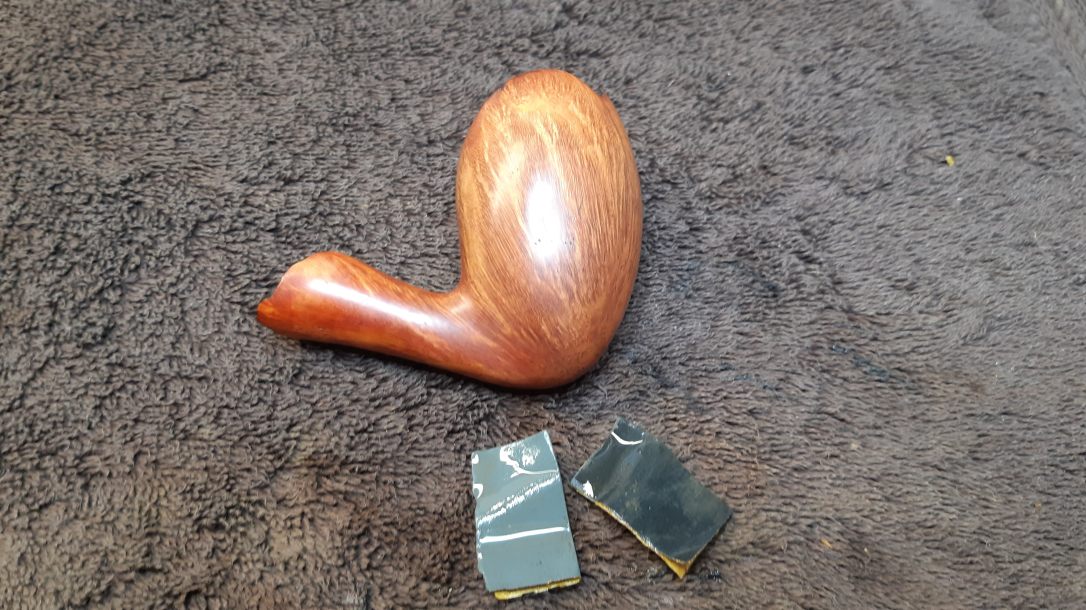 A coat of Fiebing’s Saddle Tan leather dye refreshed the faded finish and really made the grain pop. A wipe with mineral oil re-hydrated the tired briar and gave the finish depth. 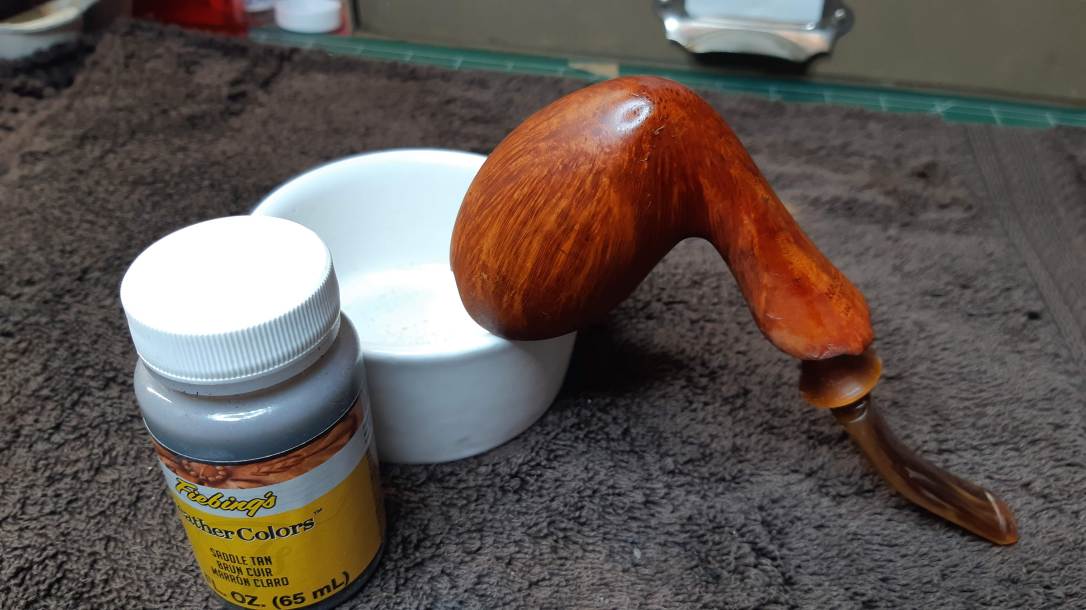 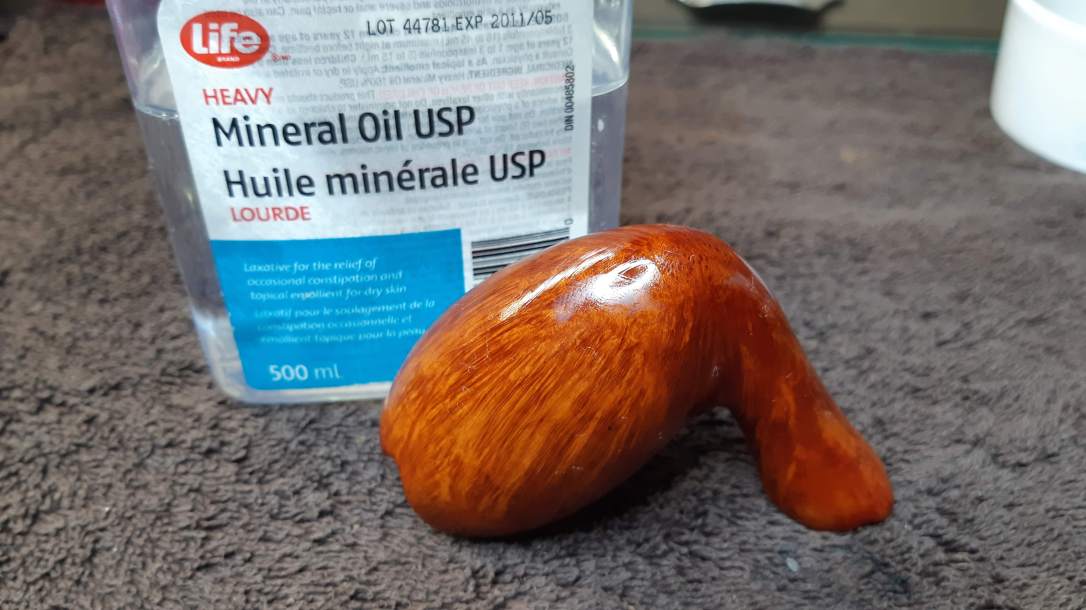 Setting the stummel aside to rest, I moved on to the stem, first soaking it in Oxyclean and warm water to raise the oxidation. When I pulled the stem from the soak, I scrubbed away the oxidation, grease and old wax with 0000 steel wool and Magic Eraser. A few pipe cleaners dipped in alcohol removed the last traces of tars and dirt from the airway. 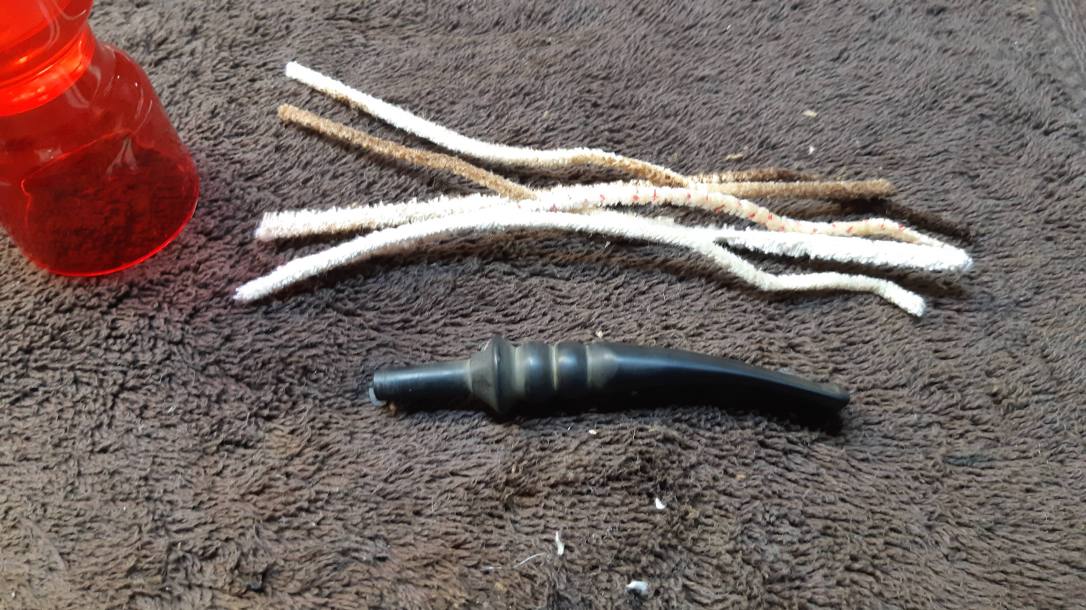 These pics show the tricky oxidation stuck in the turnings of the stem, and the extent of the tooth damage to the underside of the bit.

I patched the tooth hole with CA glue mixed with charcoal powder after jamming a tape-covered cardboard wedge tightly into the slot at the end of the bit. The wedge keeps the airway open while the patch sets, and, conveniently, CA glue does not stick to tape. 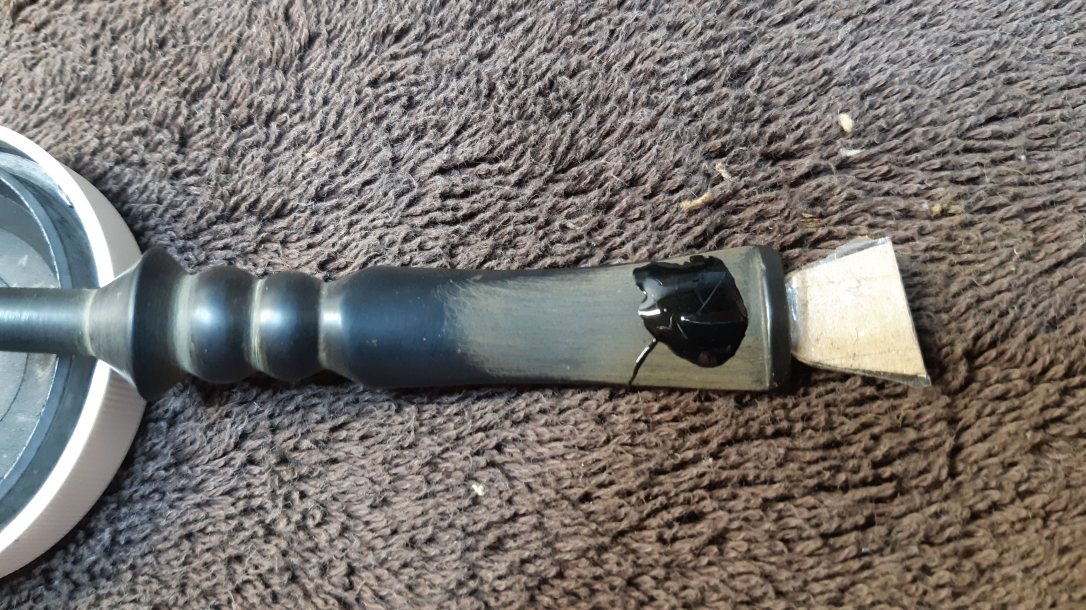 After filing and sanding the patch smooth, I test-fit the stem in the shank mortise. It was very loose now that the old tars that had been holding it in place were gone. This happens frequently when cleaning up estate pipes. The stem tenon can get compressed if it is removed and reinserted while the pipe is warm, and the briar can dry out over time while the pipe sits unused. Both contribute to a loose fit.

I attempted to plump up the stem using heat, waving a lighter flame under the tenon to encourage the vulcanite to regain its original dimensions. This helped a bit, as did enlarging the airway in the tenon using more heat and the smooth end of a drill bit, but the stem was still too loose to grip the walls of the mortise.

In the end, I concluded that the stem is likely a poorly fit replacement. There was just no other reason for the tenon to be so much smaller than the mortise. As I didn’t have a better replacement stem on hand, I resorted to layering black CA glue around the tenon to fatten it up. The results aren’t perfect  – there are a few swirls of grey in the otherwise black tenon – but the stem does now fit snugly into the shank. This pic shows the tenon after the glue had set but before sanding it to fit the mortise. 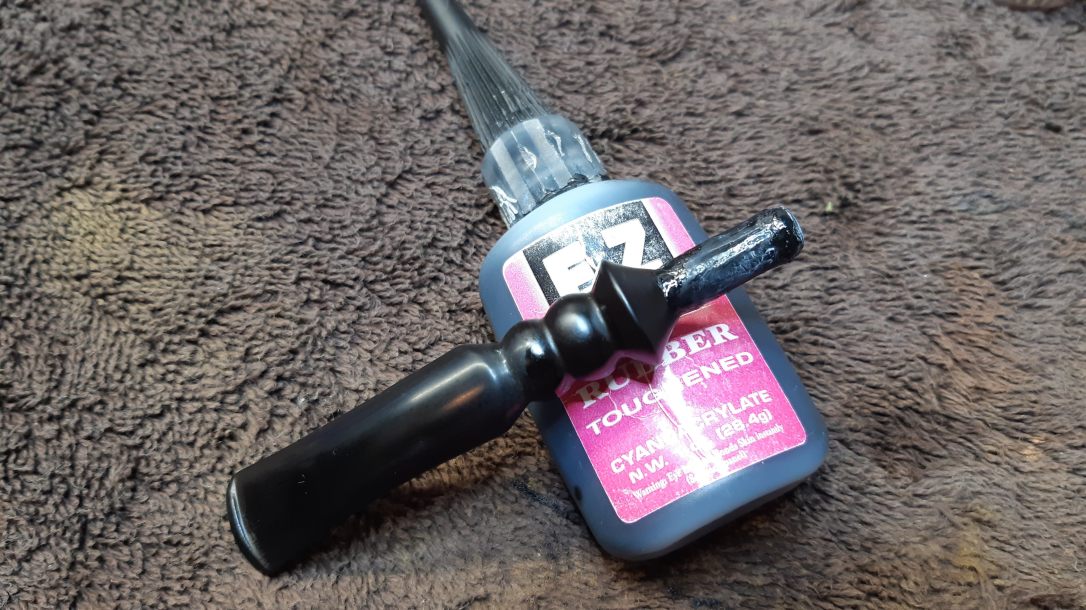 The last step of this refurbishment was to take the completed pipe to the buffer for a run of White Diamond compound and several coats of Carnauba wax to shine and protect the new finish.

The revived pipe is a real looker, with its stunning flame grain, plateaux rim and shank face, and deep black stem. For all its size (6″ long overall and a 2-3/4″ tall bowl), this Harcourt B is surprisingly light, weighing in at only 46 grams, which makes it very comfortable to clench for the duration of its long smoke time.

If you’d like to add this beautiful Harcourt pipe to your own rack, it is available on the Pipes Inventory page now.

Thanks for following along with this estate refurbishment. I enjoyed working on this lovely Preben Holm creation.

Here is the finished pipe. Until next time, Happy Piping. 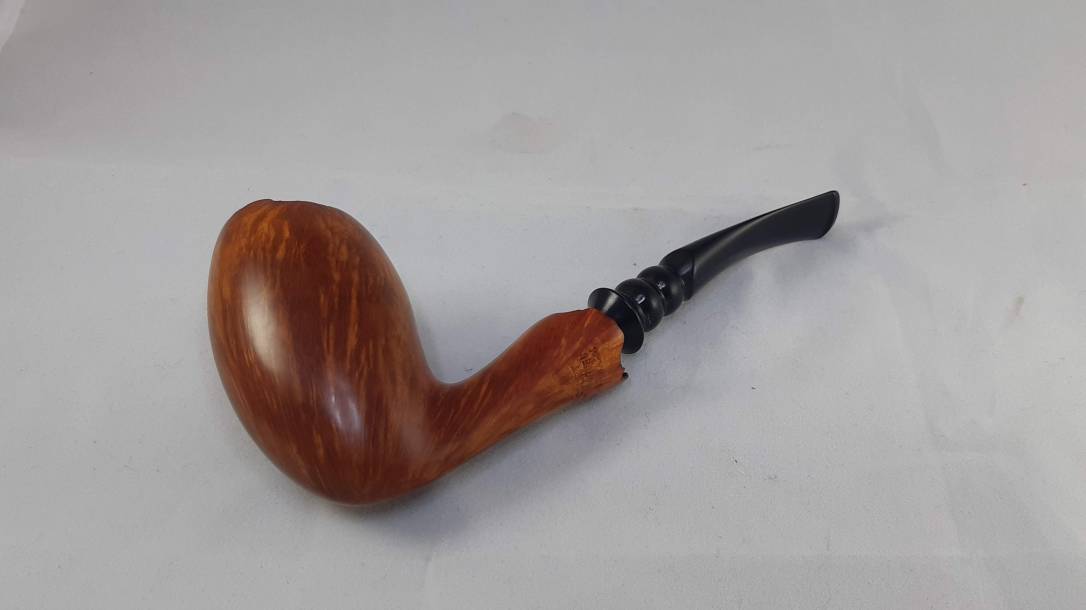 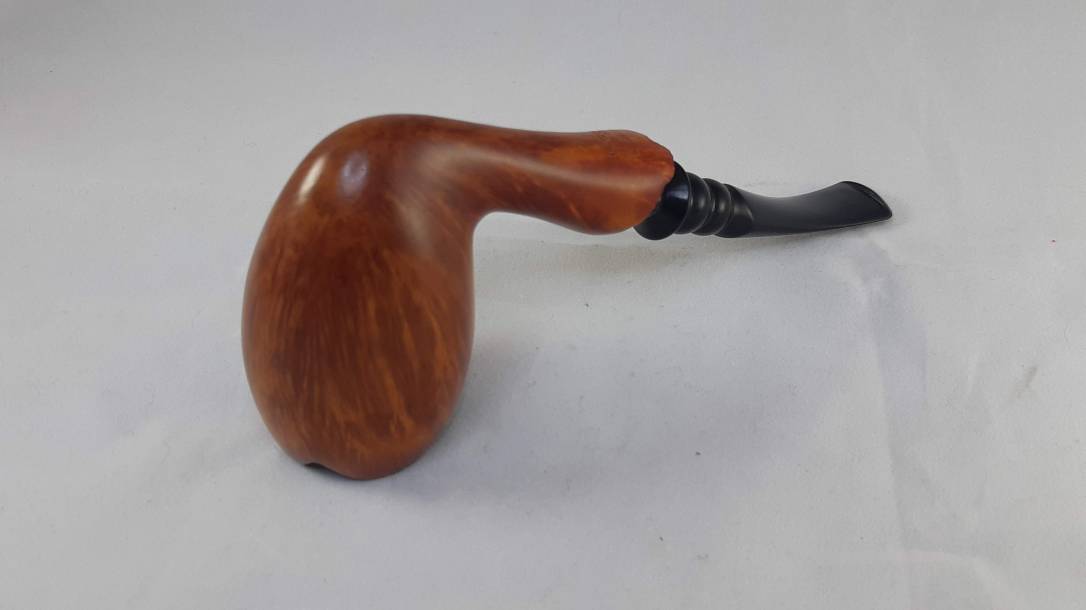 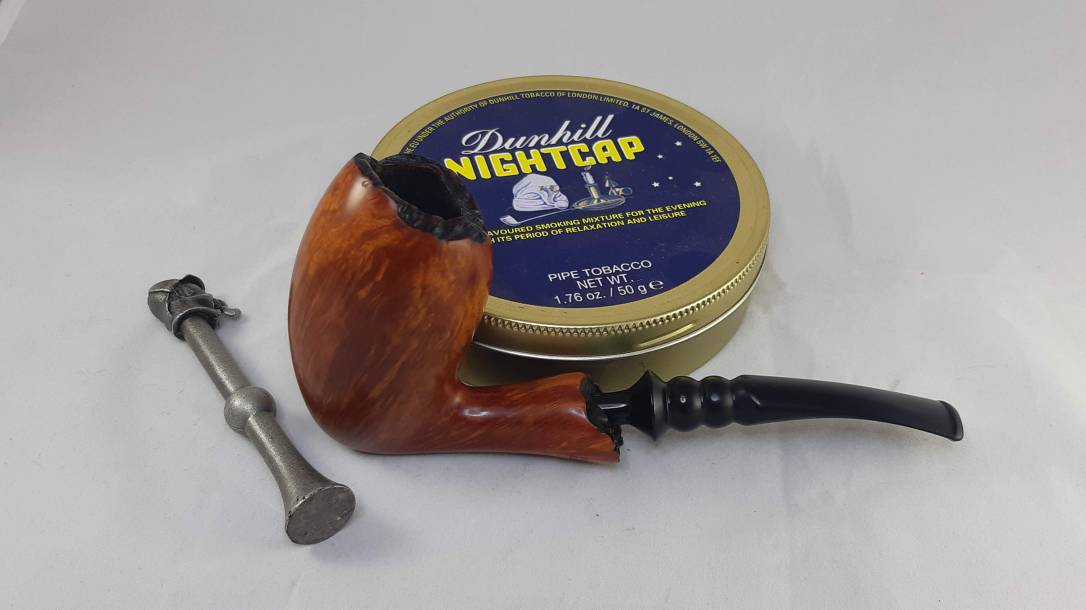