I replenished my refurb box with about a dozen new-to-me estate pipes recently. Among the new arrivals was this Brigham 6-Dot Bent Pear. In many respects, the pipe arrived on the worktable in excellent condition – the stem was like new, without any chatter or tooth dents or even oxidation; the majority of the stummel was in similar tick and looked like it would polish up nicely with just a bit of effort – until my critical inspecting eye reached the rim. 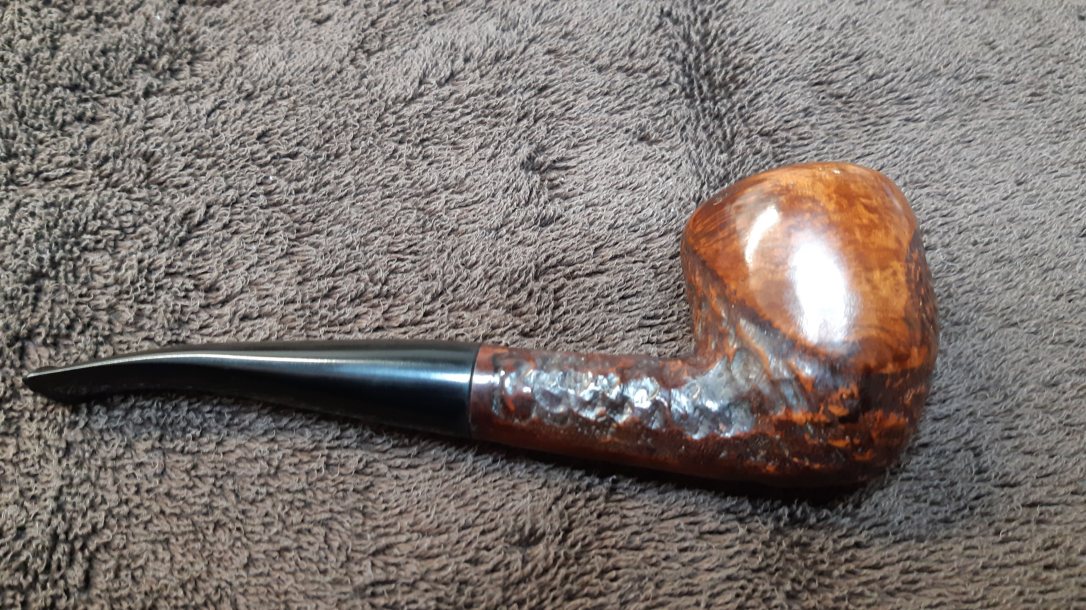 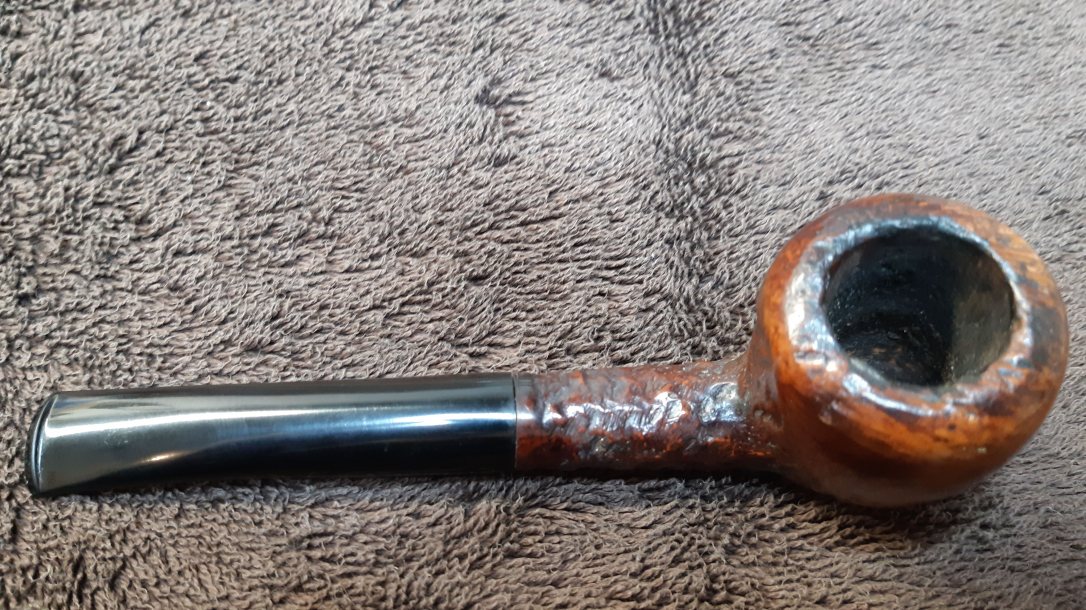 Did you wince as badly as I did when you caught sight of the rim? Here are some close-up pics of the damage inflicted on this otherwise lovely pipe. 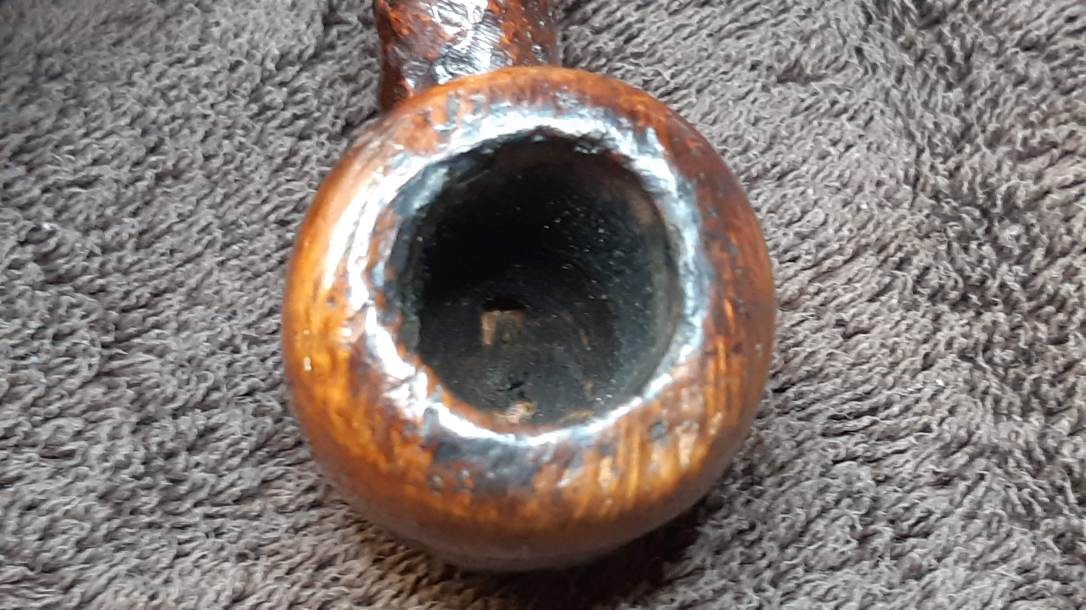 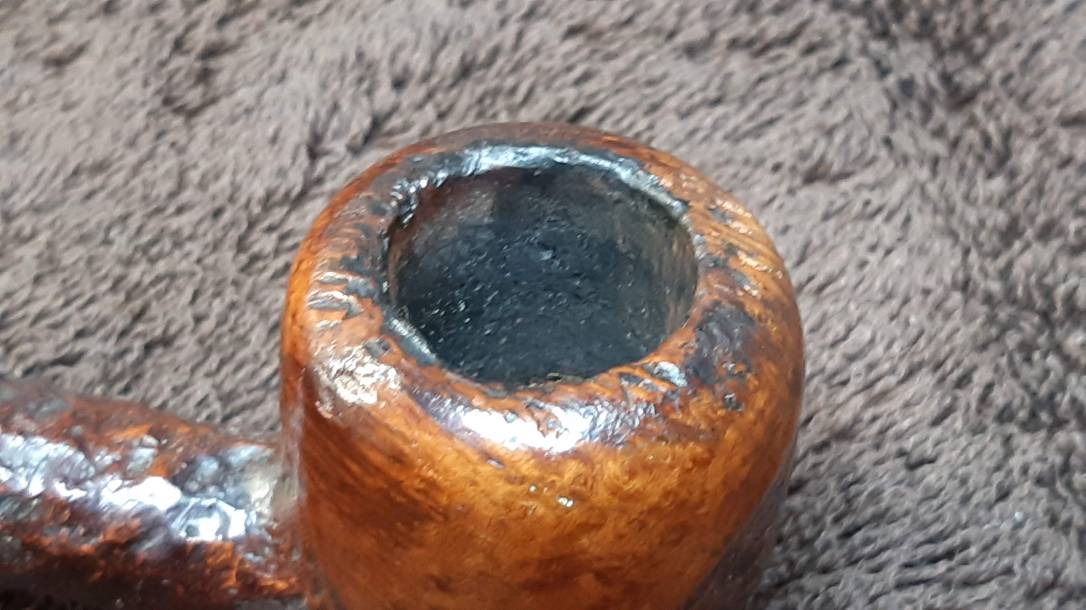 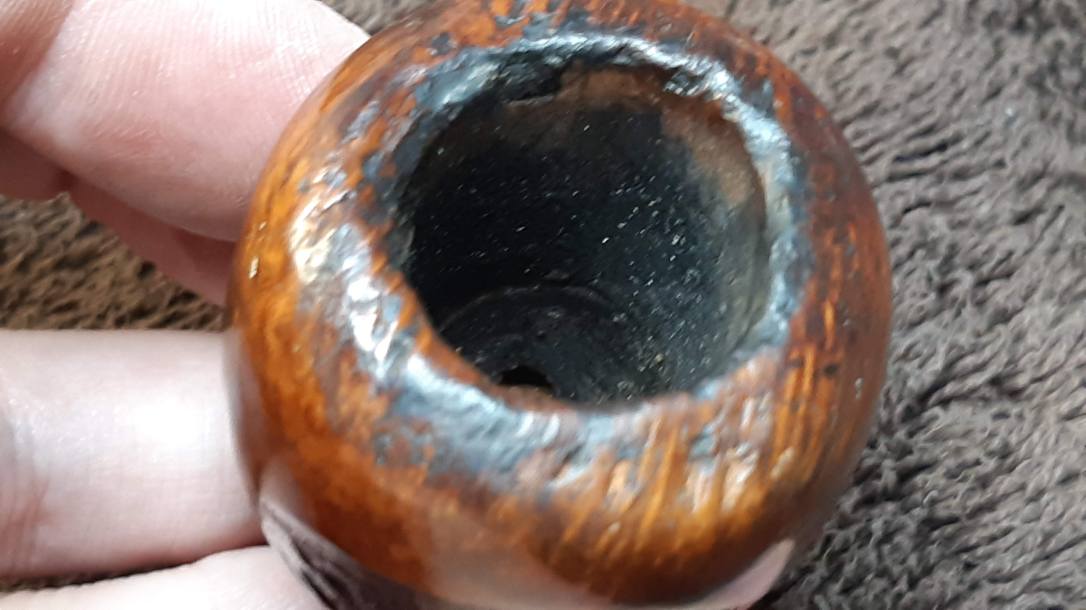 Ouch! That hurts my heart. Seriously, why do people do this? If you’re prone to knocking your dottle out against any handy hard surface, why buy a high-end pipe? You could outfit yourself with enough cobs to last years for the same price as this 6-Dot….

OK, enough of my ranting. Let’s get on with things, shall we? The pipe is stamped “659” then “Brigham” over “Canada” on the smooth underside of the shank. There are six brass pins (or Dots as Brigham called them) in a starburst pattern on the left flank of the vulcanite stem. 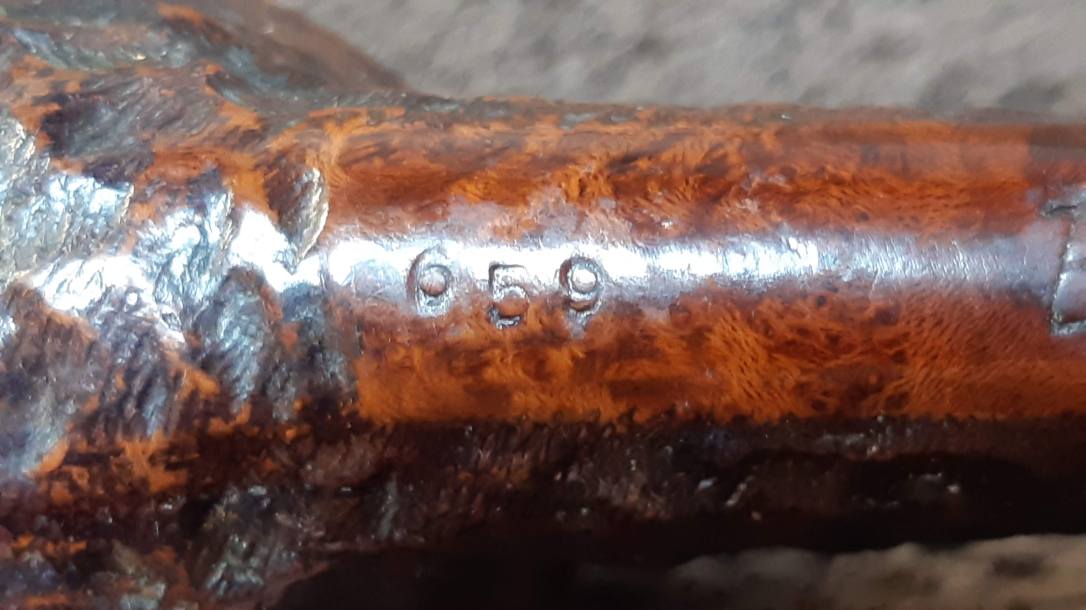 This pipe was made after Brigham re-worked its grading system in 1980, scrapping the Executive and VIP pinning patterns in favour of a simpler seven-level scheme in which each level had a corresponding number of Dots. For more insight into Brigham pinning patterns, I encourage you to read through this article I wrote several years ago.

I had another Shape 59 in my collection, this time a 4-Dot version. These pics show the two pipes side by side. The rim on the 4-Dot pipe is the original factory rim and illustrates what the rim on the 6-Dot pipe SHOULD look like. 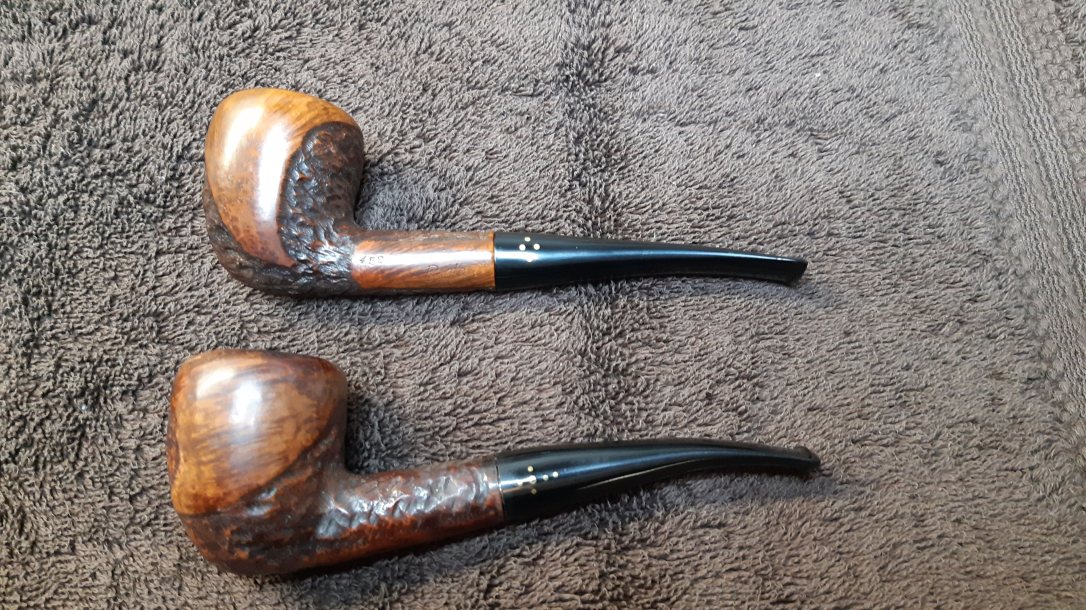 The factory rim is a nicely curved line culminating in a flat area into which the chamber is drilled. Hoping to recapture this contour, I used some 220-grit sandpaper to carefully remove the damaged briar. However, it soon became obvious that there simply wasn’t enough wood left to recreate the factory rim. This pic shows the stummel after the initial rough sanding. 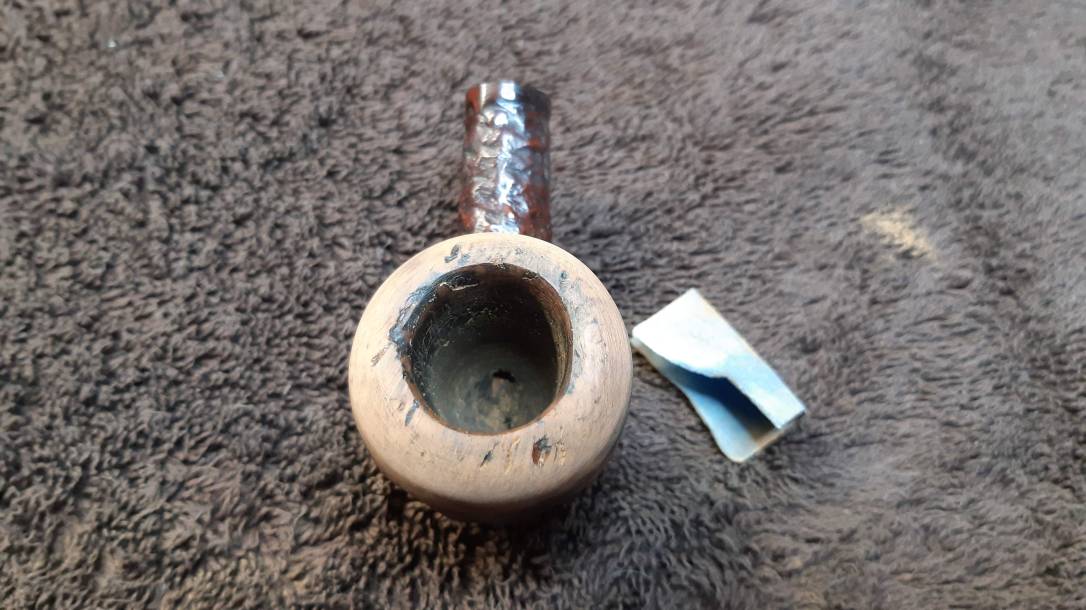 I don’t like to use CA glue and briar dust patches anywhere near the inner rim of the chamber – the heat from smoking the pipe could be enough to vaporize the cured glue, which the piper could then potentially inhale. Ick. Instead, I elected here to sand out the damaged briar and create a crowned rim – one that curved at both inner and outer edges.

Reaming the chamber helped to tidy things up. I used the same 80-grit sandpaper wrapped around a marker to rough in the new rim shape. This pic shows the progress after sanding to 220-grit. I would need to do more work to smooth out the transition from inner rim to chamber wall.

Before I got too far off course, I took a few minutes to clean the internals of both stem and stummel. The mortise and airways were surprisingly clean!

I continued working on the rim until I had eliminated all but a few small dents less than 1 mm in size. Rather than remove more briar, I chose to fill these tiny imperfections with CA glue and briar dust. When the patch cured, I sanded the new rim smooth. The second pic below shows the rim after sanding with 220 and 320 grit papers and 0000 steel wool. It’s starting to look good! 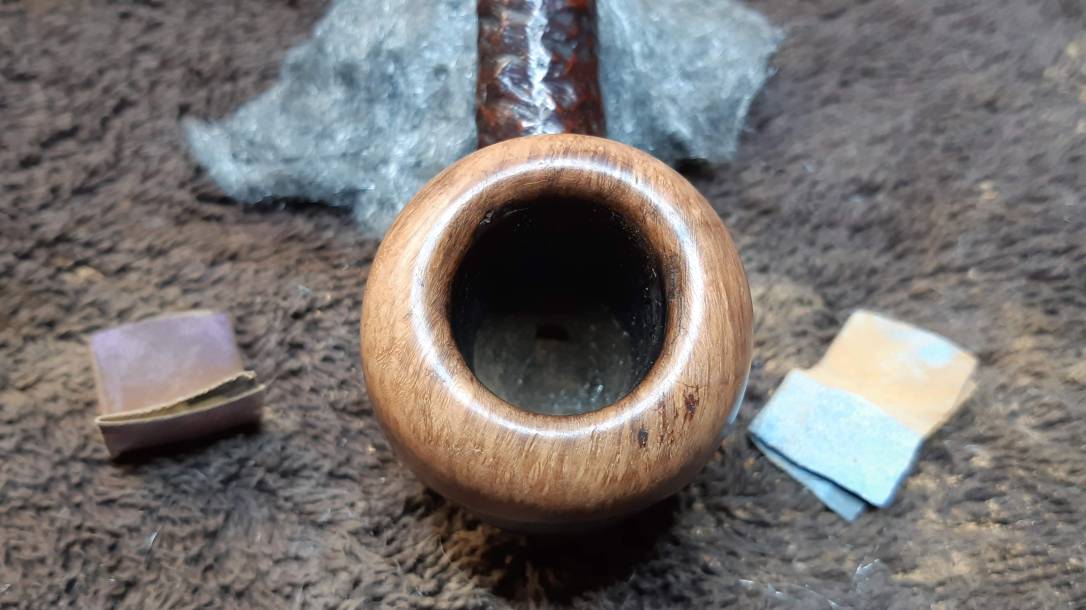 Happy with the new rim, I wet-sanded the briar one last time with 800 and 2000-grit papers and then scrubbed the stummel clean with Murphy’s Oil Soap. This removed a surprising amount of dirt, grease and wax from the briar and prepped it for a new finish.

Keeping with the original colour scheme, I hit the briar with a coat of Fiebing’s Dark Brown leather dye and let it dry. Happy with the results, I locked in the new finish and revitalized the briar with a wipe of mineral oil.

I let the mineral oil sit on the briar for a minute or two and then hand-buffed the excess away with a scrap of old terry towel. After a pause for some supper, I took the pipe to the buffer and gave stem and stummel a run with White Diamond compound on the wheel followed by several coats of Carnauba wax to add shine and protect the new finish.

I’m really pleased with the way this Brigham 659 turned out. Though not a factory profile, the new rim shape is, I think, an acceptable compromise that restored the damaged briar while avoiding large, ugly fills which would have been very out of place on this high-end pipe. It also happens to look great!

As most of you know, I have a growing collection of vintage Brigham pipes. My ultimate goal is to have an example of every shape. I’m about five years into the endeavour and already running low on rack space, so I’ve instituted a “no-repeats” policy under which I will keep only one pipe in each shape (with a few caveats I won’t go into here).

When I find a pipe in a shape I already have, I keep the one with a higher grade. This elevates the overall quality of my collection over time, keeps the collection to a manageable size and frees up some cash now and again (that I can reinvest in more pipes, of course!). Adding this 1980’s vintage Brigham 6-Dot Bent Pear to the rack will displace its 4-Dot brother. That pipe is now available for purchase on the Pipe Inventory page.

I hope you’ve enjoyed following along on this rim rescue restoration. Until next time, Happy Piping! Here’s the finished pipe. 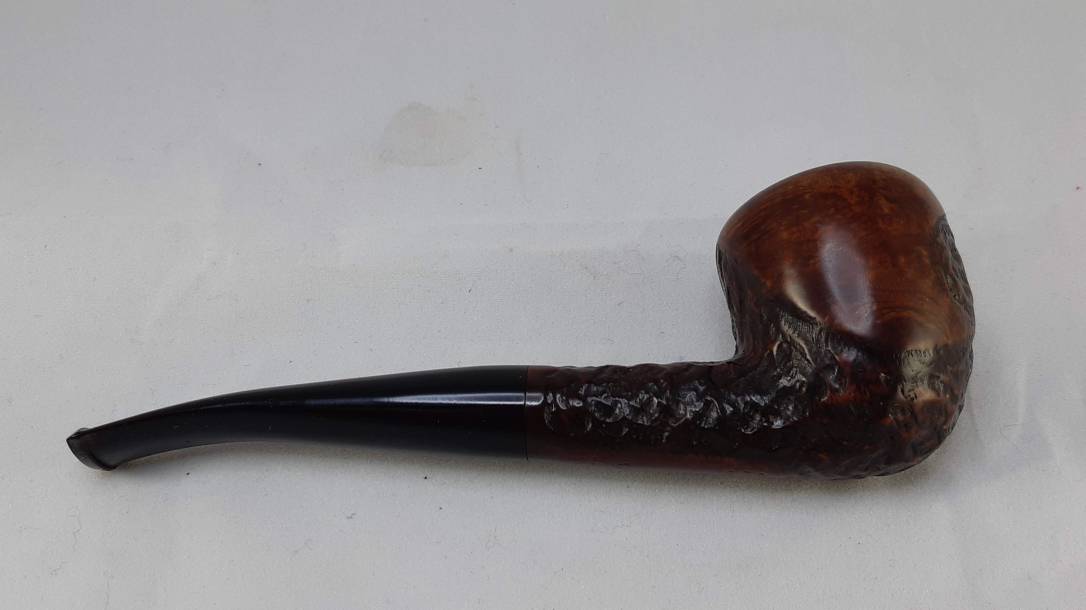 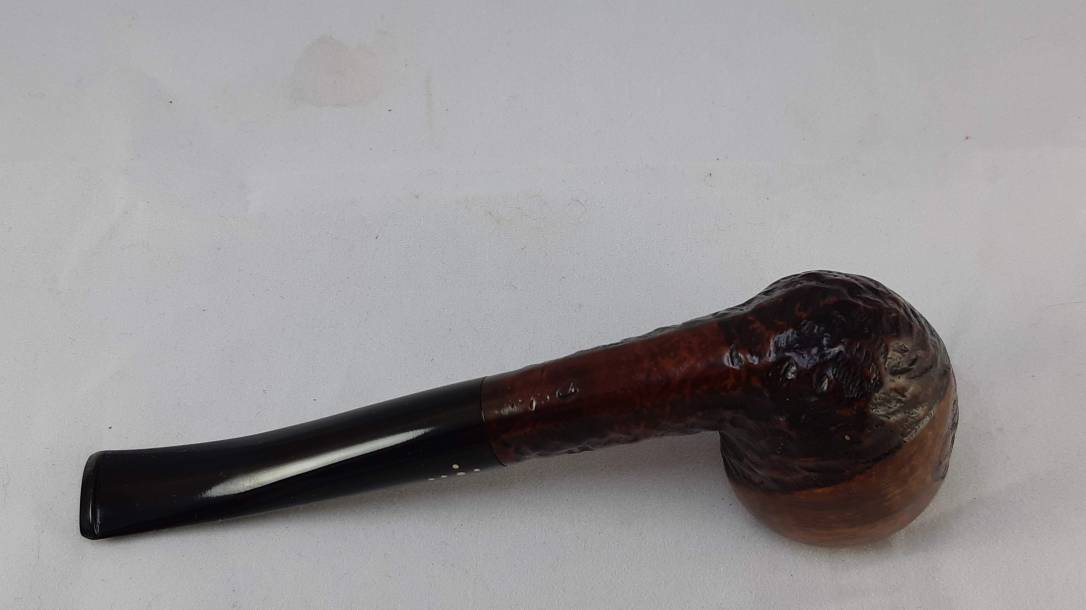 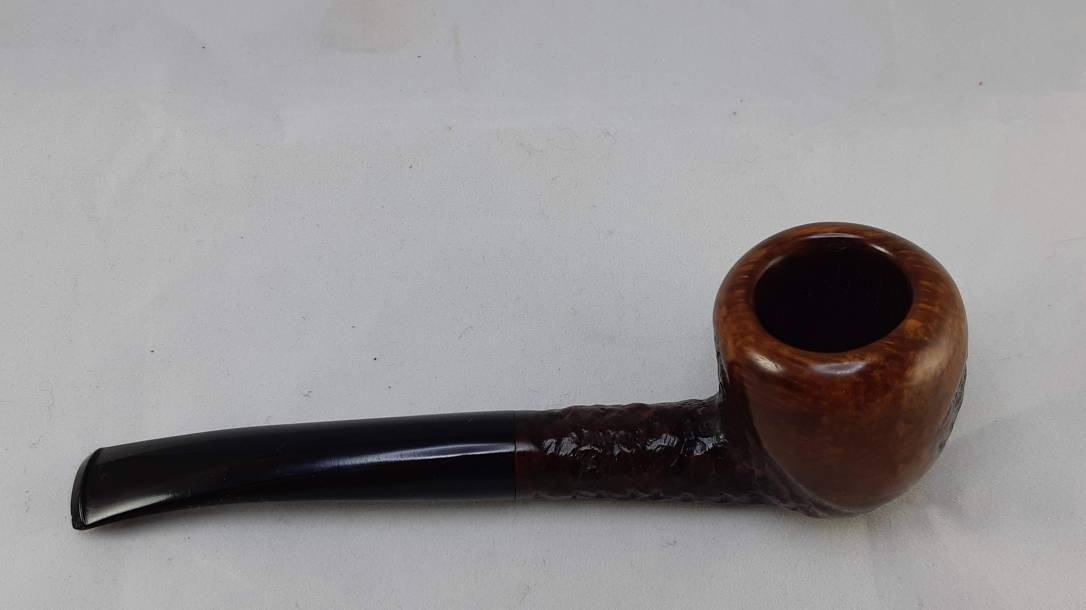 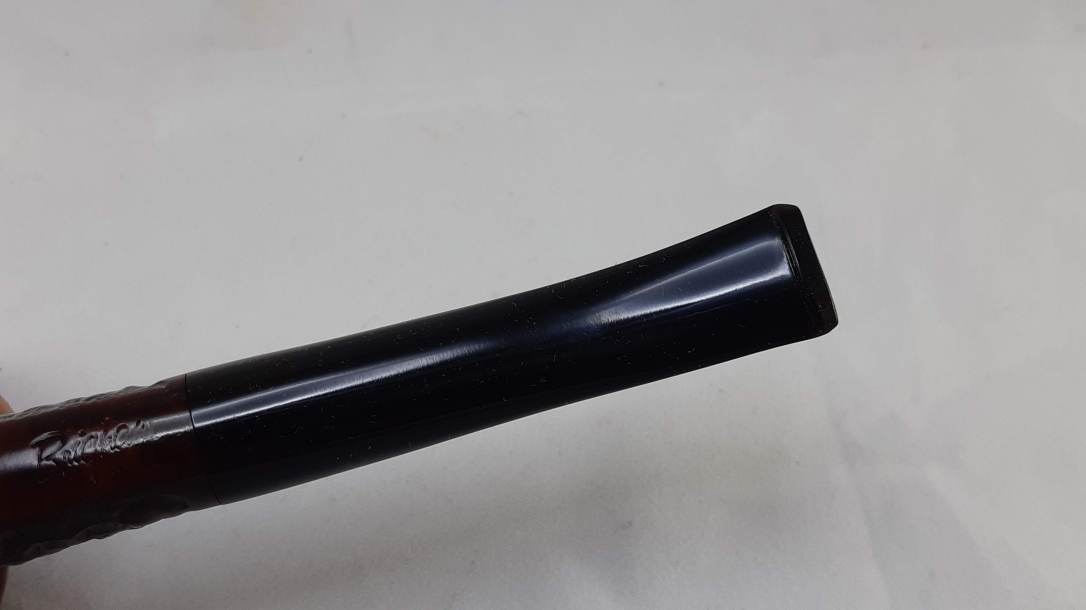 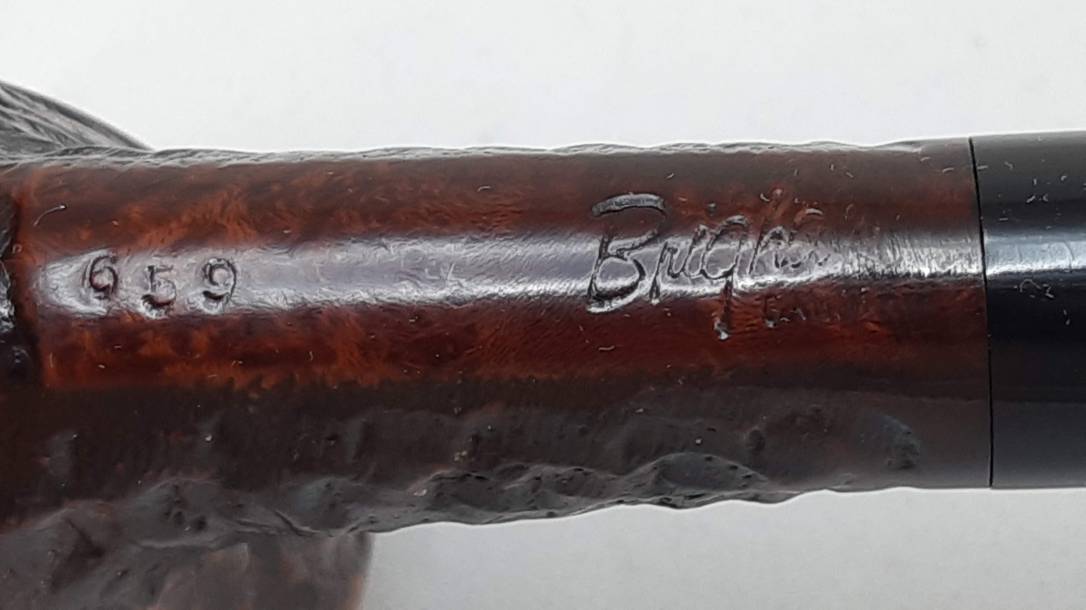 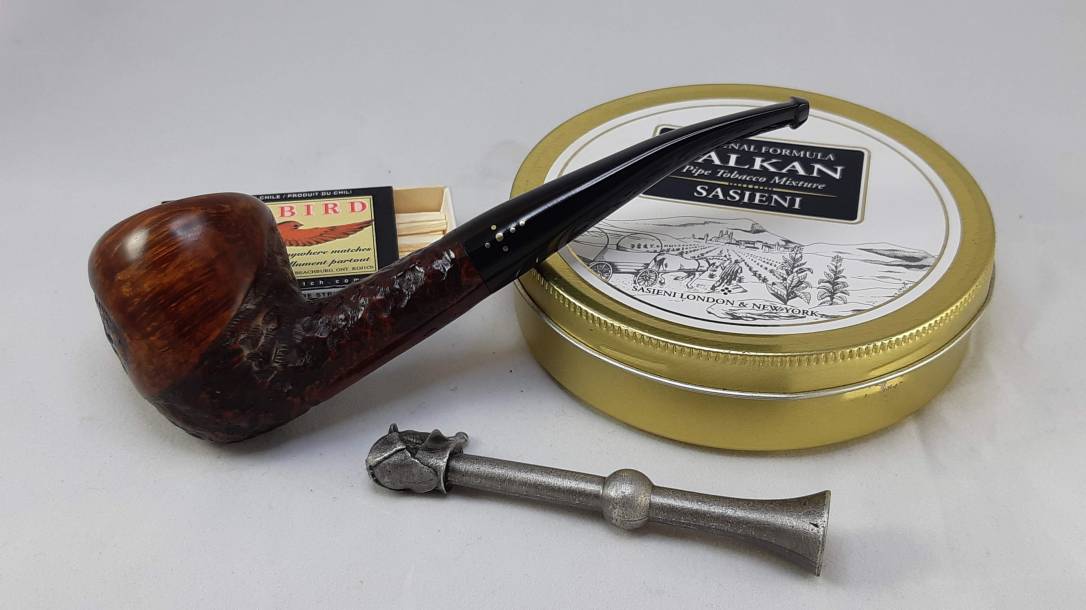