I found this Danish Sovereign pipe, a Stanwell seconds brand, during one of my periodic wanders through the local antique shops. As you can see from this series of pictures, the pipe was rather tired looking, with a crust of lava on the crowned rim, a dirty and faded finish, and a fair bit of oxidation on both stem and vulcanite shank extension. 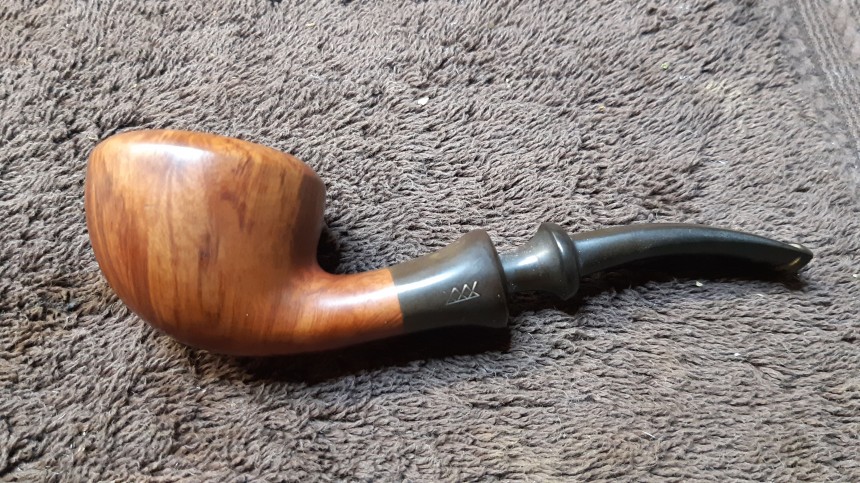 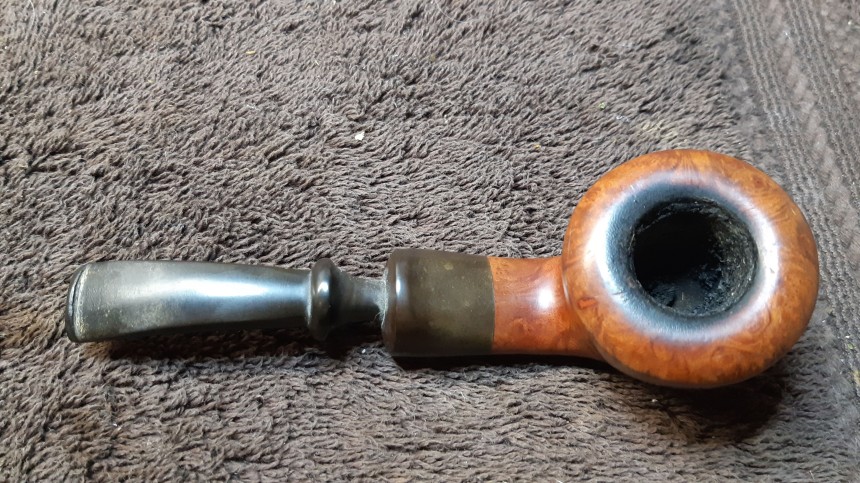 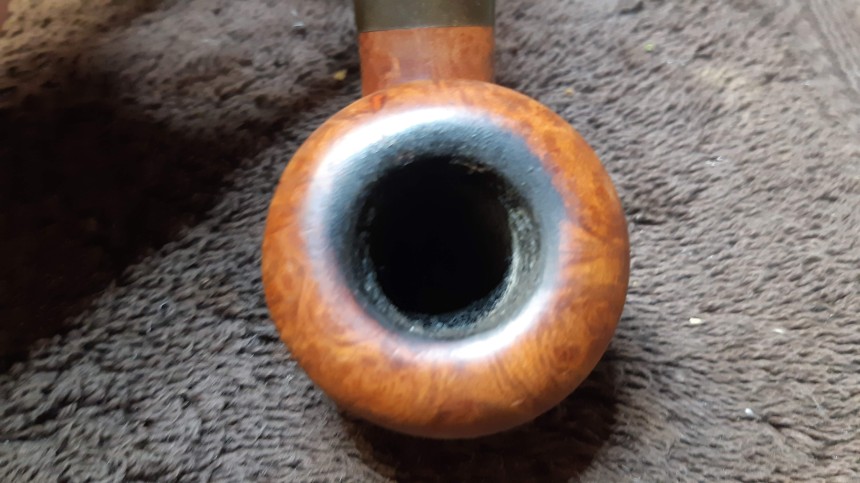 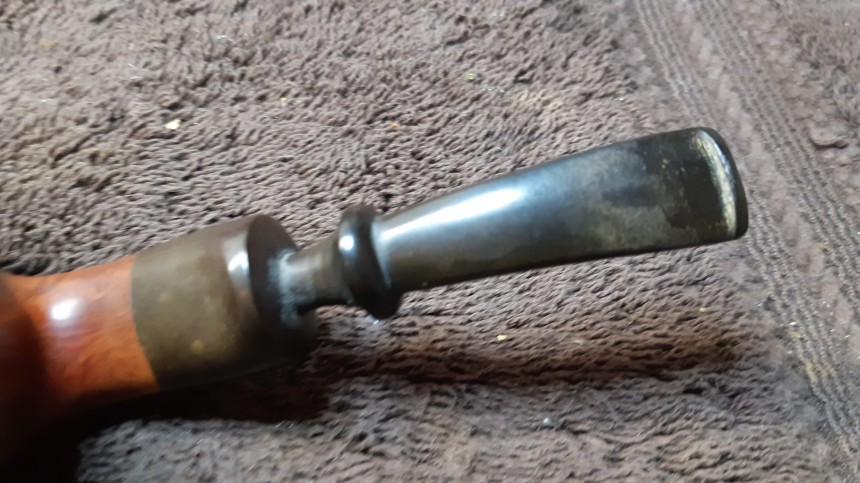 The Stanwell Shape Chart describes Shape 86 as a  “Freehand, slightly bent, full mouthpiece by Sixten Ivarsson”. In reality, this translates to a fairly compact scoop-shaped pipe measuring 5-1/2″ long with a 1-5/8″ wide x 1-1/2″ high bowl, a 3/4″ bore and a flat oval shank. The “M” in the shape number of this pipe indicates a Military mount, thus the vulcanite shank extension and fancy saddle stem.

Curious to see what lay under the crust of tars on the rim, I started the cleanup there. Most of the lava came away after a bit of work with alcohol on a cotton pad, revealing a pristine rim underneath. 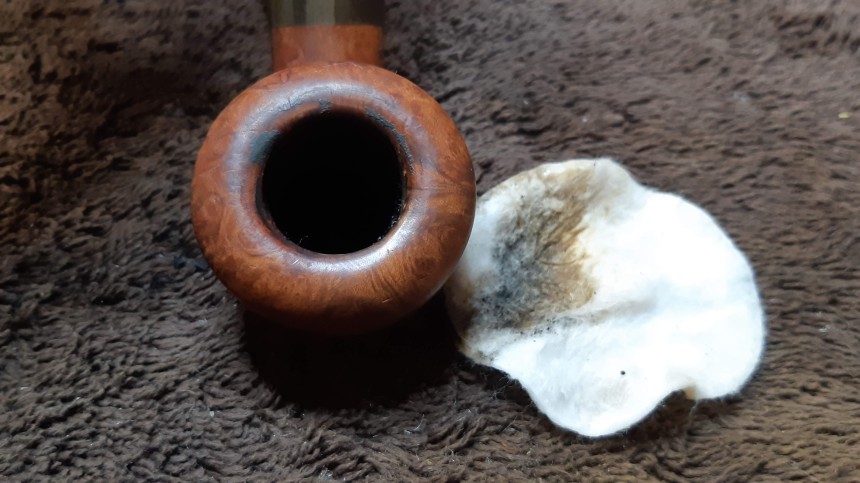 My first attempt to remove the stem from the shank was unsuccessful. It appeared that this pipe was put away dirty – the tars in the shank had a good grip on the stem tenon! I dribbled a bit of isopropyl alcohol into the joint and let it sit for a minute before trying to twist the stem out. This time it came out fairly easily.

I ran a few pipe cleaners dipped in alcohol through the stem to ensure the airway was open, and then dropped it into a bath of Oxyclean and warm water to raise and soften the oxidation. 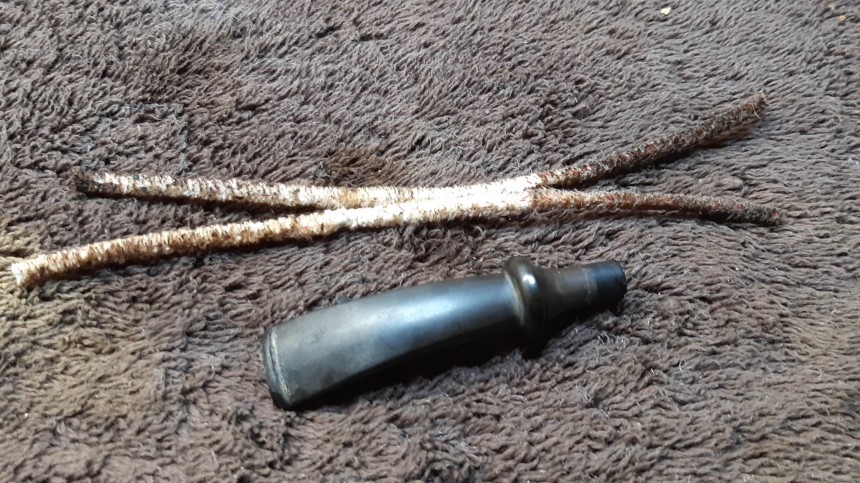 While the stem soaked, I reamed the tobacco chamber to remove the old cake and get a look at the chamber walls. The briar was in excellent condition.

You can see in the above pic the single fill in the stummel, located on the edge of the rear rim near the 11 o’clock position. This is the only fill or flaw I could find on this pipe and it’s probably the reason this stummel was sold as a Danish Sovereign rather than a Stanwell. If nothing else, Stanwell had some stringent quality control rules when this pipe was made – many other manufacturers would have hidden the flaw under a dark stain or rustication and sold it as a first quality pipe.

I finished cleaning the stummel’s internals with pipe cleaners, cotton swabs and more alcohol, and then gave it an alcohol treatment to clear out any remaining tars. I packed cotton balls into the mortise and chamber, filled the pipe with alcohol and let it sit overnight.

The treatment did its work overnight, dissolving the deep-seated tars inside the pipe and capturing them in the cotton.

I removed the soiled cotton balls from the stummel and tidied up the remaining loose tars and debris with a few pipe cleaners. With the internals clean, I turned to the exterior of the briar, scrubbing the stummel with Murphy’s Oil Soap and a toothbrush to remove the layers of dirt, grease and old wax from the finish.

Turning now to the stem, I rescued the vulcanite from the Oxy bath and scrubbed it clean with 0000 steel wool and Magic Eraser. A few pipe cleaners run through the airway confirmed that the internals were clean too.

With the worst of the oxidation removed, I found that the stem had a slightly rough orange peel texture. This made me wonder if the stem was a poorly-sanded replacement. A closer look under magnification proved my theory correct – the molding line was still visible running down the side of the stem where the two halves were fused together during manufacturing. 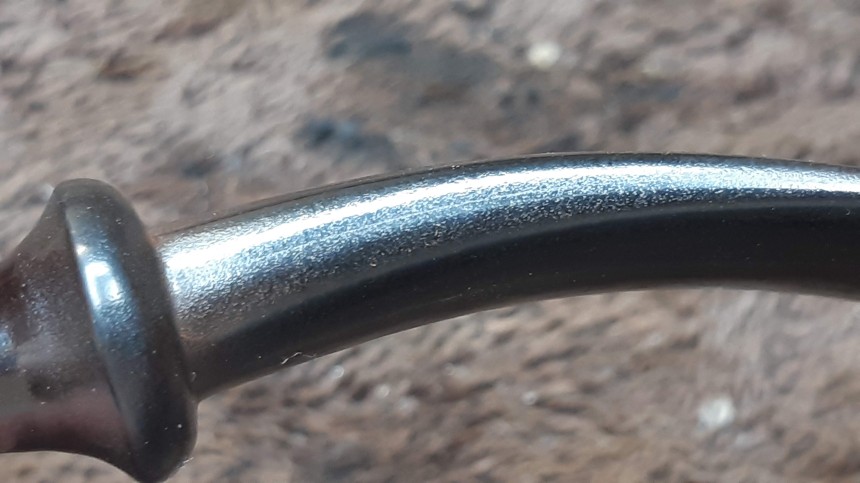 I have no idea whether the replacement stem was fitted by a professional or by the pipe’s owner, but in either case, five more minutes of work would have smoothed out the rough cast stem. I worked with a succession of abrasives from 220-grit to 2000-grit to smooth out the texture and bring the stem up to par. 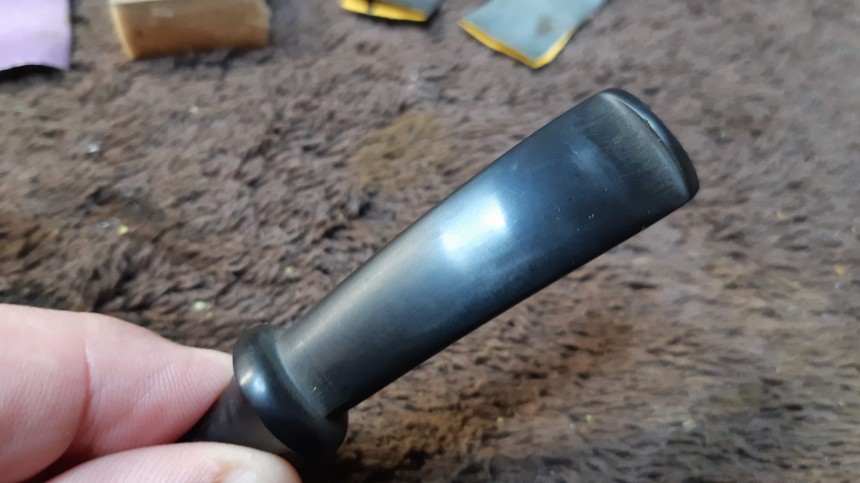 A test buff on the Tripoli wheel revealed a few tooth marks next to the button on both upper and lower sides of the bit. I drop-filled the areas with black CA glue and smoothed the repairs out after the glue had fully cured. 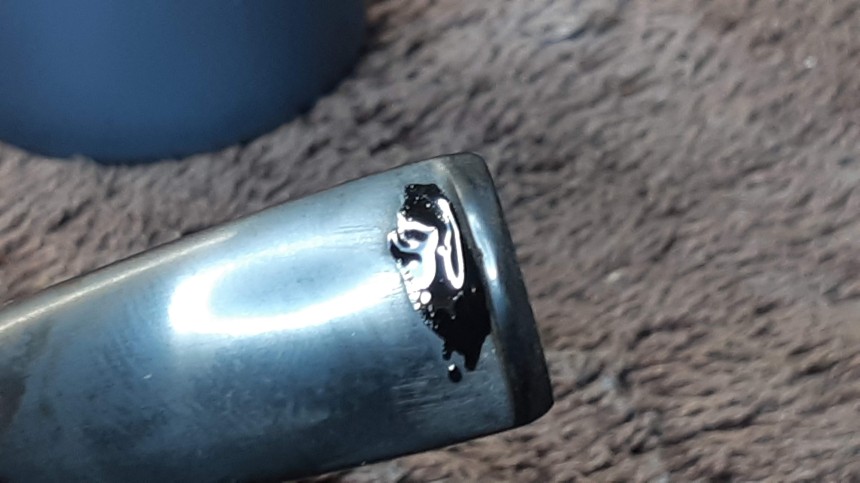 All that was left to do now was to take the finished pipe to the buffer. I gave the stem a proper polishing with Tripoli and White Diamond compounds, while the stummel received only the White Diamond. Happy with the results, I gave both stummel and stem several light coats of Carnauba wax to shine and protect the revitalized pipe.

I have to say I’m quite pleased with the way this Danish Sovereign cleaned up. The stem, though a replacement, is of a good quality and fits snugly in the mortise, and the briar boasts a nice mix of mainly vertical grain with a little Birdseye thrown in for good measure. The wide, crowned rim is eye-catching and gives the overall shape a sense of organic fluidity, something Sixten Ivarsson was especially good at.

This Danish Sovereign 86M is ready to find a new piper. It is available for purchase on the Pipe Inventory page if you’d like to add it to your own rack or rotation.

Thanks for following along on this refurbishment. Until next time, Happy Piping! 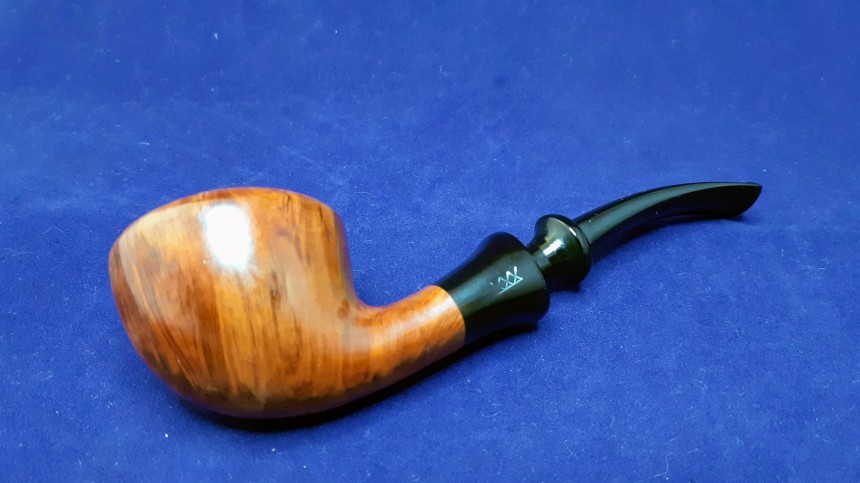 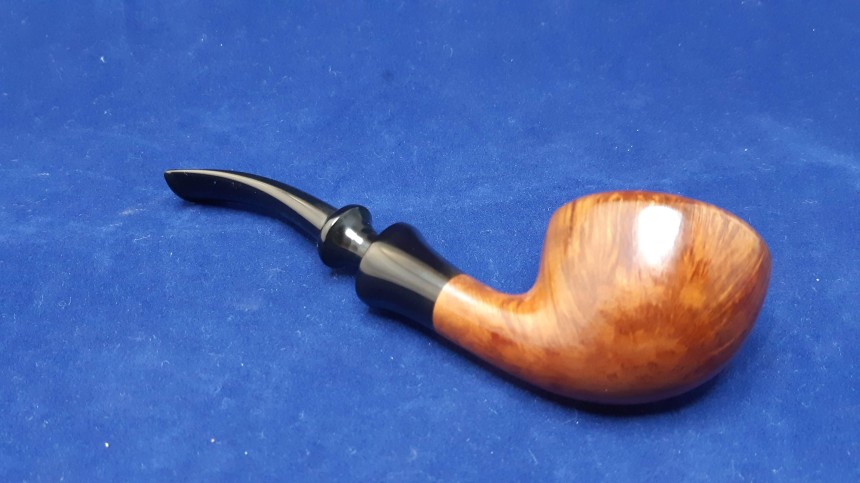 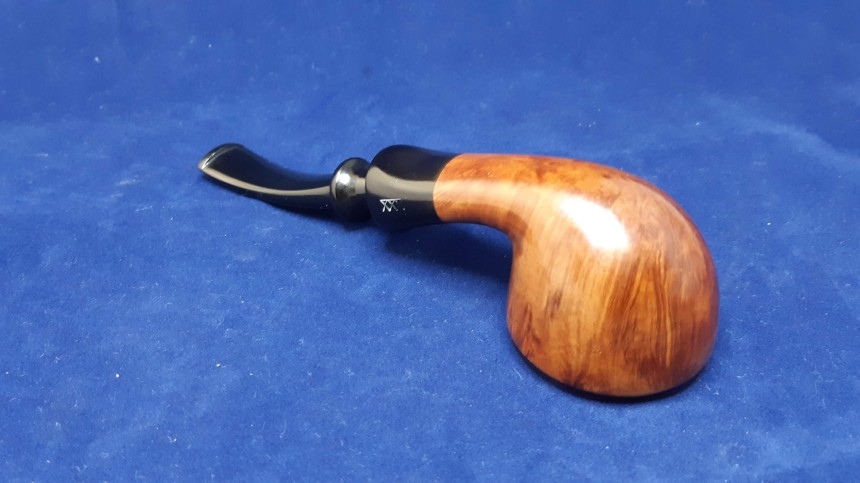