As many of you know, Brigham pipes are famous for their filter system composed of an aluminum tenon/filter holder and a tubular Rock Maple filter, or “distillator” as the company calls it now.

I’ve made up replacement stems for many Brigham estate pipes, but this was my first time doing so for a Brigham Freehand. In theory, the system installs into a freehand style stem the same way it does in a regular taper or saddle stem. In practice, however, I found the experience to be rather more technical.

The pipe in question came to me in a box of estate pipes sent for restoration. The pipe had clearly been re-stemmed at least once in its life already, but the stem currently fitted was very loose in the mortise and the owner and I agreed that it was severely lacking stylistically. The stem simply did not suit the pipe. Here is the stummel without the offending stem. 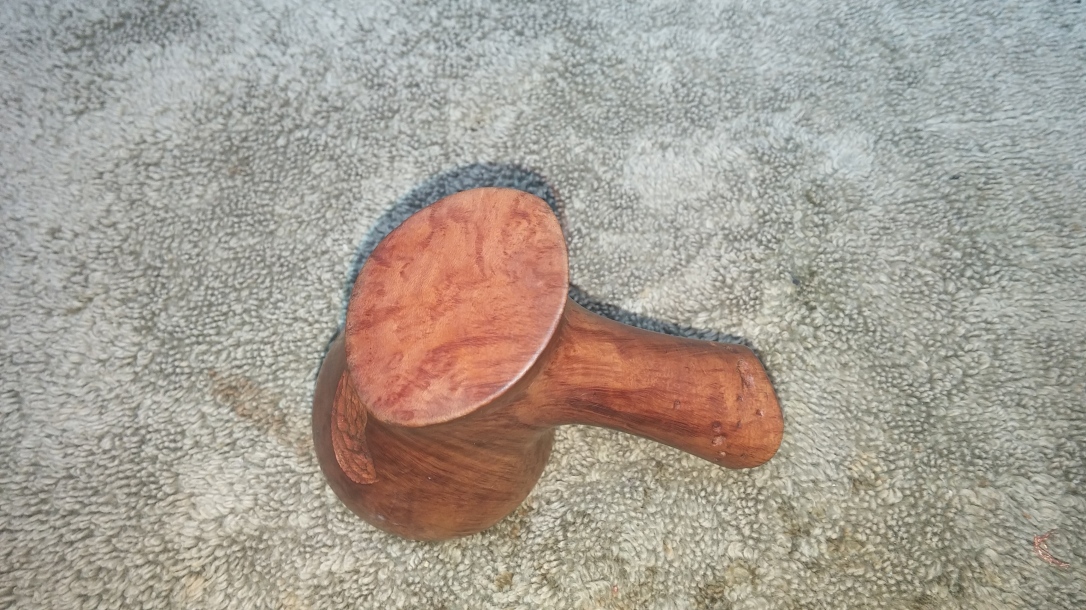 The pipe is stamped “Brigham” over “Canada” on the left side of the shank. This places its production period somewhere in the 1980s. 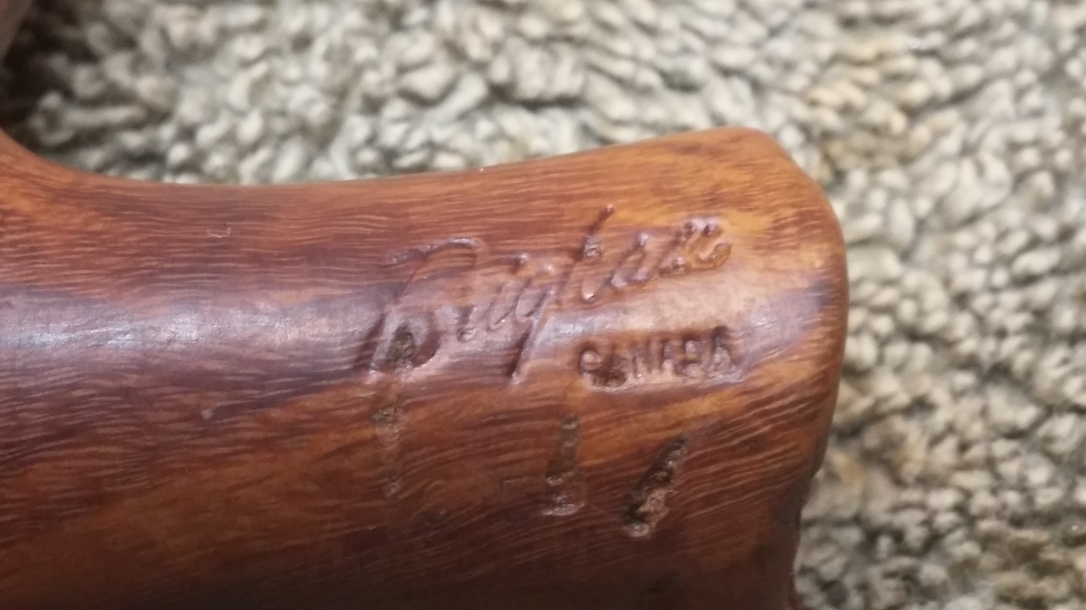 The stummel itself was in decent condition, without cracks or major structural issues. There was, however, a proliferation of evenly sized dents on the shank and rear of the bowl. The dents reminded me of the marks left by a fork in a potato prepped for baking. There was also a patch of road rash on the front rim of the bowl, and much of the rim was darkened from use. 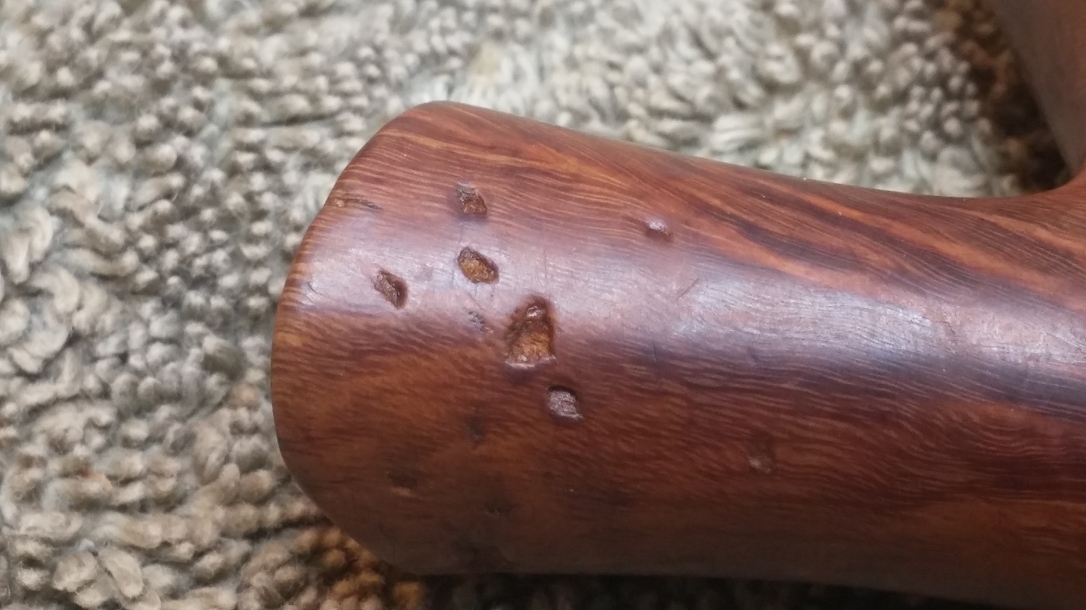 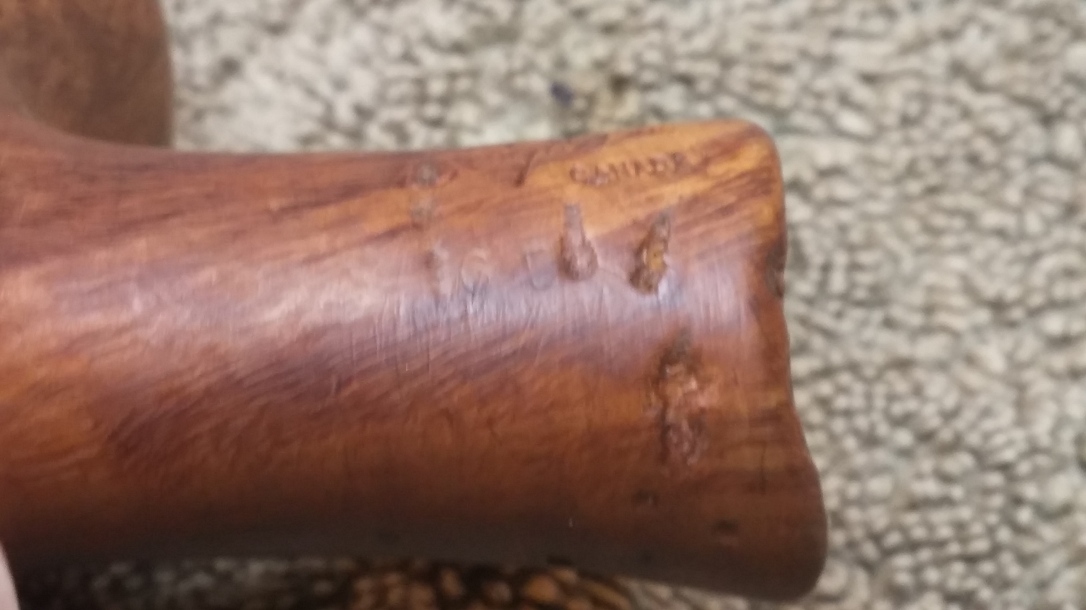 The stem that came with the pipe was basically a throw-away for this job, but it did have one valuable part – the original aluminum tenon. Before I tossed the stem into my spare parts bin, I salvaged the tenon by heating the metal over a lighter flame until it came loose from the vulcanite stem. This shot shows the removed tenon and the clunky-looking stem the pipe came with. 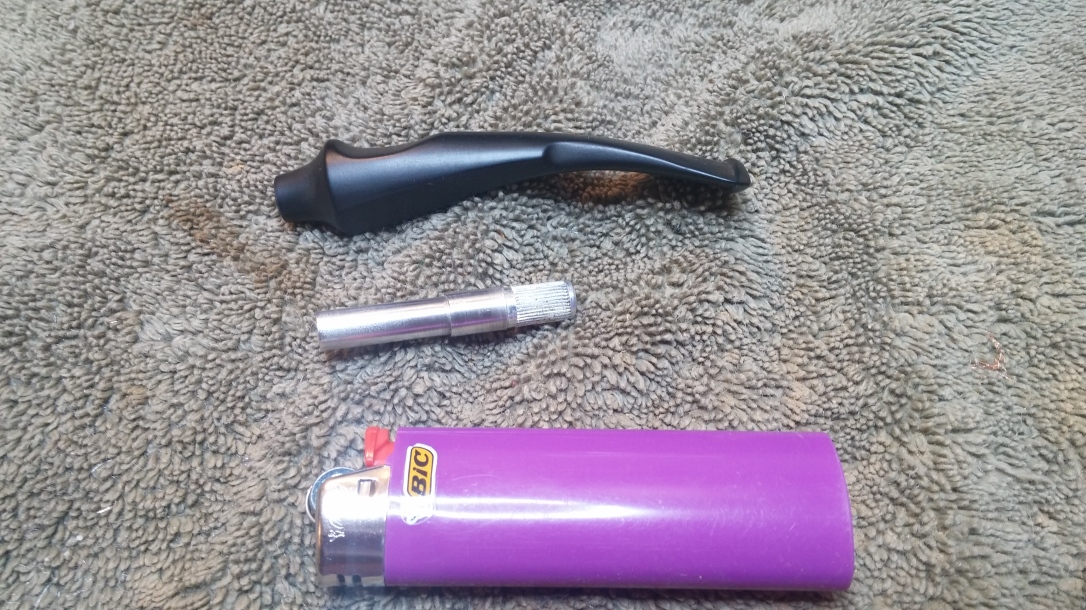 Interestingly, when I test fit the tenon, it fit snugly in the pipe shank. Something about the way it was installed into the old stem had obviously led to the loose fit. 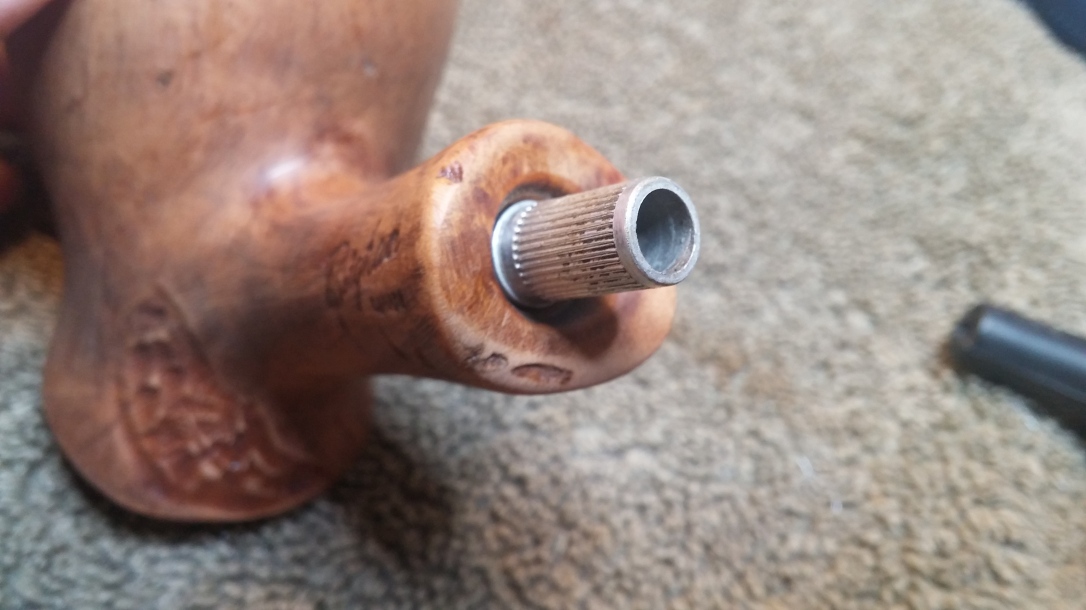 I selected a new freehand style replacement stem for this Brigham, settling on a fancy stem that more closely resembled the turned stems originally used on these pipes.

To fit everything together, I had some tricky drilling to do. First, the filter requires a 3/16″ shaft drilled into the stem. To get the shaft depth right I used the aluminum tenon as a guide. Subtracting the exposed length of the tenon from the length of the filter leaves the required depth of the shaft.

I marked the length on the drill bit with masking tape and lined everything up in my drill press before carefully drilling out the stem’s airway. I didn’t have a lot of wiggle room on this stem, so I checked my progress regularly to make sure I didn’t over-drill.

The second step was to drill out a 1/4″ mortise in the end of the stem to accept the aluminum tenon. On a taper or saddle style bit, this operation is straightforward. On a freehand bit it’s a more delicate operation due to the small stem diameter at the tenon end. I worked slowly, drilling the stem in several short runs. I hoped to avoid damaging the stem, but part way through the process I heard the telltale snap of cracking vulcanite. Ouch! Thankfully the crack was short, allowing me to cut off the damaged tip and reface the end before re-drilling both the mortise and the filter shaft to make up for the lost stem length. Here is the stem, tenon and filter after drilling.

The 1/4″ mortise I drilled was slightly smaller than the knurled end of the aluminum tenon. I did this on purpose to achieve a tight, lasting fit when I heat-set the tenon. To do this, I warmed the business end of the vulcanite stem over the heat gun until it was soft enough for me to push the tenon into place. When the stem cooled, it shrunk back to size, gripping the tenon tightly as it did.

After confirming that the stem fit nicely in the shank, I settled in for a long and somewhat tedious time filing and sanding and sanding and polishing the new stem to remove the extraneous ridges left over from the stem molding process. This always takes longer than I feel it should, but there’s no getting around it.

I worked my way from needle files to 230 and 320 grit sandpaper followed by 800 and 2000 grit wet/dry sandpaper. I finished the stem work by buffing with both red and white polishing compounds before applying several coats of Carnauba wax.

With the replacement stem sorted, I turned my attention to the stummel. The pipe’s internals were cleaned prior to the owner sending the pipe my way, so I didn’t have to worry about that. I wiped the exterior down with alcohol on a cotton pad, and then gently sanded out the road rash and other minor imperfections in the briar. The rim cleaned up nicely with a bit of 800-grit sandpaper too.

Sanding had reduced some of the “fork dents” in the briar but I’d still have to deal with them somehow. I drop-filled a few isolated dents with CA glue while I considered my options for repairing the small constellation of marks on the shank.

After consulting with the pipe’s owner, I chose to rusticate the affected area. The stummel already had a few small rusticated areas where factory craftsmen had treated several flaws in the briar, so another patch would not stand out. To replicate the shallow factory rustication style, I mounted a round-headed diamond carving burr in my rotary tool and carved a free-form area around the shank, encompassing the dents. This pic shows the pipe at this point. The newly rusticated area shows as pale wood against the older, darker briar.

To blend the new work with the old I applied a very thin wash coat of Fiebing’s Saddle Tan leather dye to the entire stummel, with a bit of extra attention paid to the new rustication. After the dye dried I wiped the briar with a little mineral oil on a cotton pad to refresh the wood and give the finish depth.

I added a small bend to the end of the stem just before taking the pipe to the buffer. Both stem and stummel received a run of White Diamnond compound followed by several coats of Carnauba wax.

I’m quite pleased with the end result of this restoration. The new stem fits well and is much more in keeping with the original look of the pipe. The stummel is also much improved; the briar is refreshed and ready to provide years of service to its owner.

Installing the Brigham system in this pipe was a fun and challenging project. I hope you enjoyed following along! 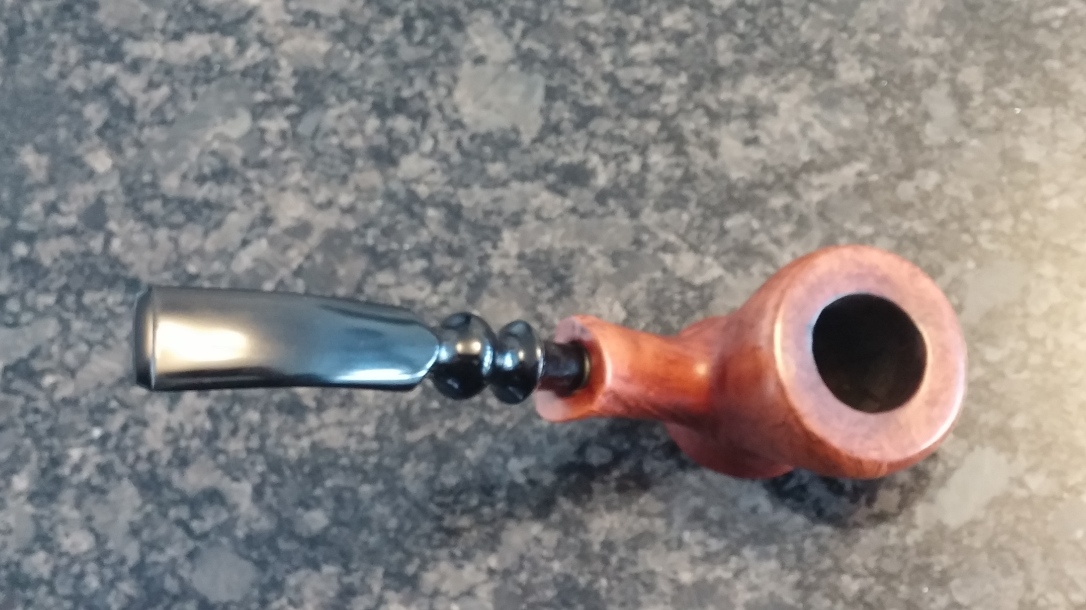 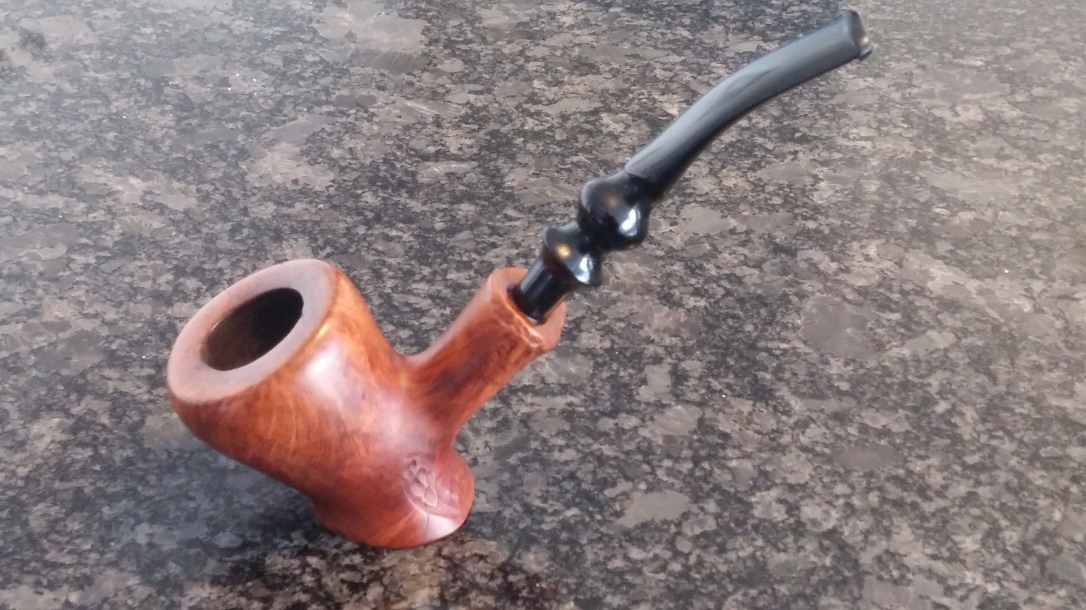 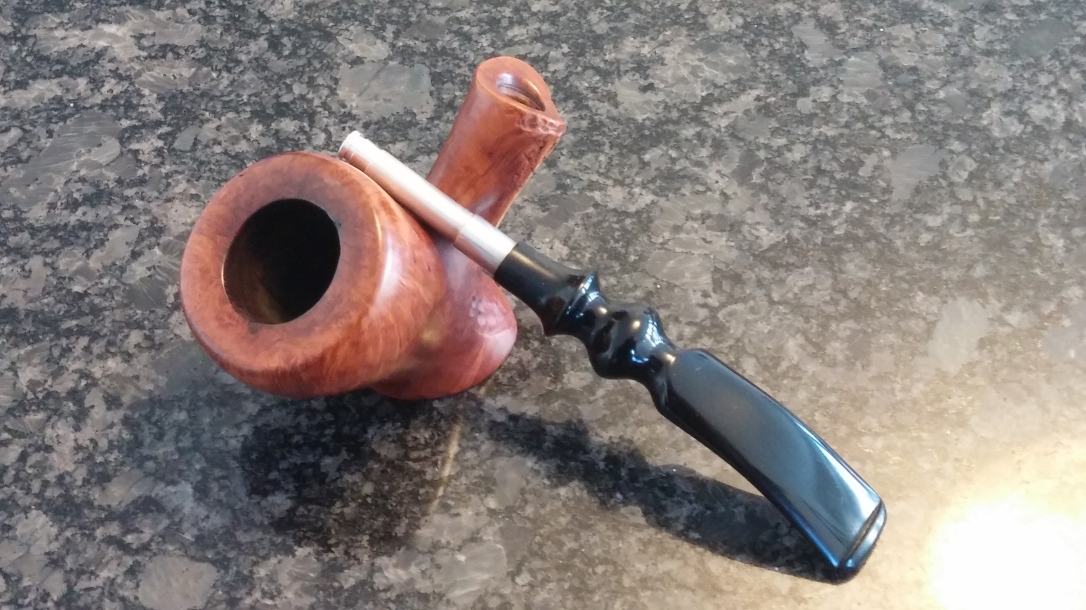