This Brigham 503 Billiard is the second pipe I worked on from the lot of seven 1980’s vintage Brigham pipes I purchased before Christmas. Unlike the Brigham 562 Student pipe I wrote about previously, which featured a mix of smooth and rusticated finishes, this Billiard is fully smooth with a contrast stain that makes full use of the briar’s eye-catching mix of cross and birdseye graining. The stain gives the pipe an almost tiger-striped look I find very appealing.

When the pipe arrived on my worktable it had clearly seen some use – enough to build up a crust of lava on the rear and right rim areas, and some very light tooth marks on the stem. The oxidation on the stem dulled the five brass pins (or Dots, as they’re known by Brigham fans) inset in the left flank near the stem face, and showed a faint striped pattern where the sun had coloured the vulcanite unevenly around the pipe rack. Otherwise, this Brigham Billiard had been well cared for; apart from a light coat of dirt, the pipe was in excellent shape. 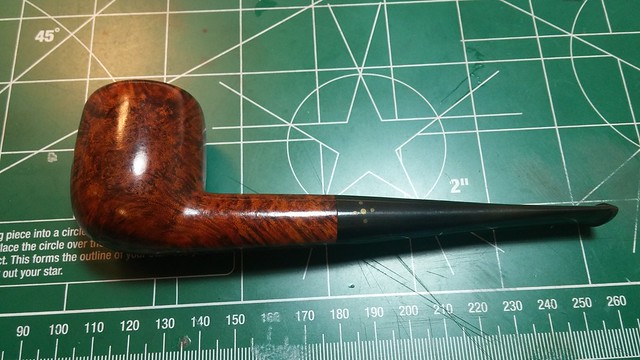 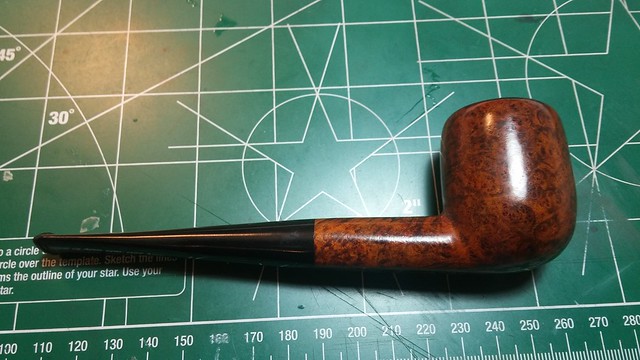 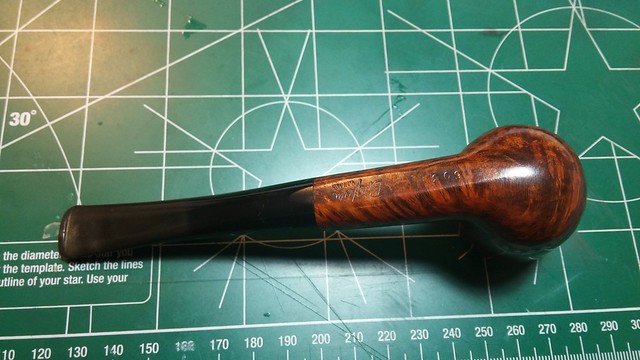 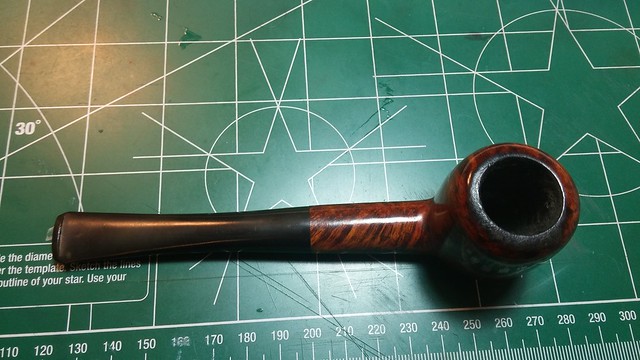 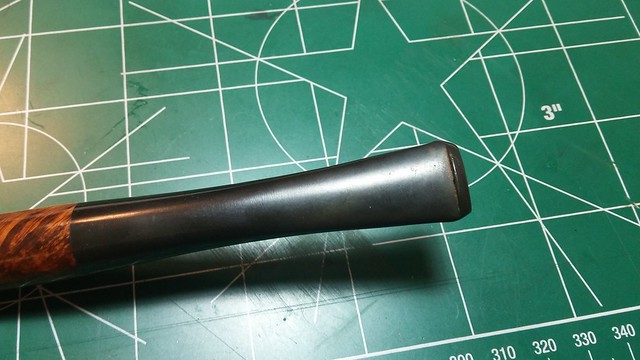 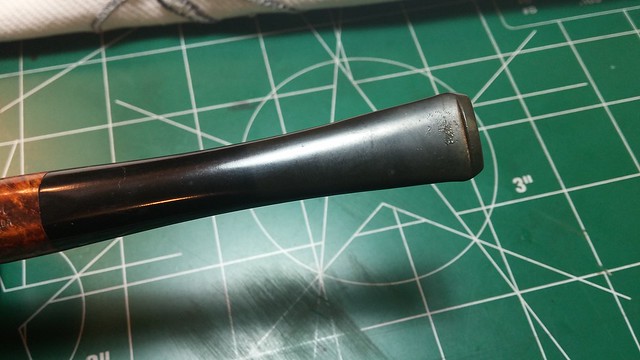 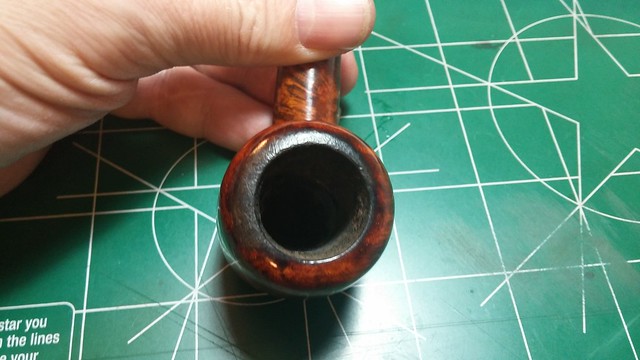 The pipe is stamped on its flat underside with its three-digit shape number, “503”, indicating an 03 (Billiard) shape in a 5-Dot grade. At this point in Brigham’s history, its production pipes were divided into seven grades, from 1 Dot to 7 Dot pipes. 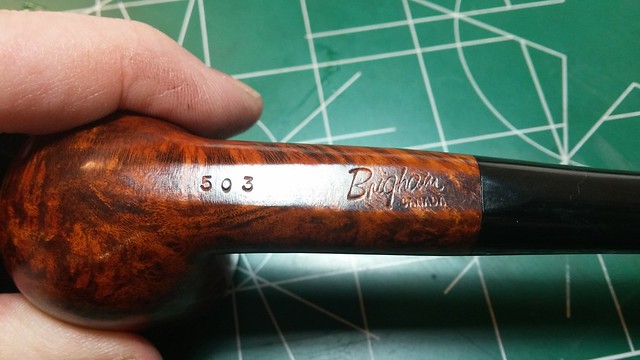 I decided to start cleaning up this 503 by clearing the crust of lava from the rounded rim. I used the edge of a pen knife to carefully scrape away the worst of the crust, being careful to avoid scratching the briar underneath. 0000 steel wool removed the remaining traces of lava, after which I polished the rim with micromesh pads to 3600 grit. 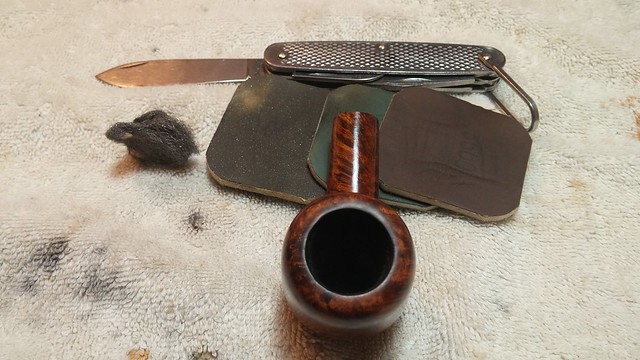 I reamed the tobacco chamber, removing a light cake with my Castleford reamer followed by sandpaper wrapped around a Sharpie marker. The walls of the chamber were in excellent shape, without cracks or defects. The airway drilling on this 5-Dot is spot-on. 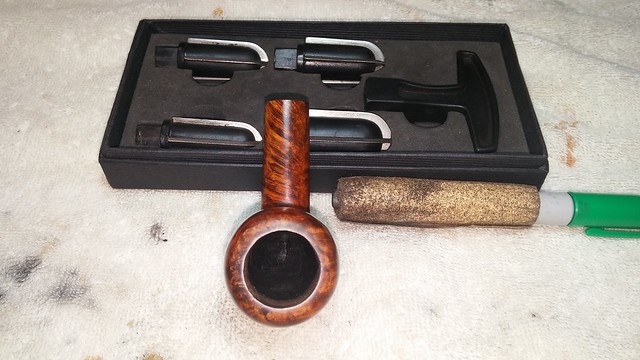 A close inspection of the rim showed a slight out-of-roundness there that I wanted to smooth out. I worked the inner rim edge with a scrap of 220-grit sandpaper to remove the “corners” (likely created by careless cleaning of the bowl with a knife blade). The pics below show the rim before and after the work. 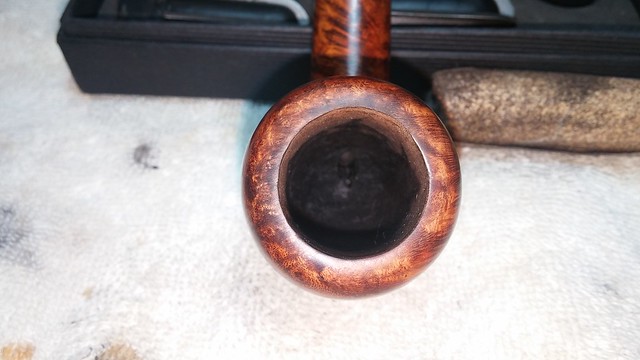 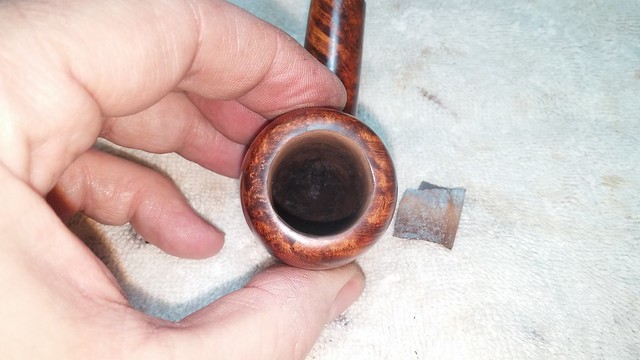 This pipe, unlike most estate pipes that come across my desk, had actually been cleaned after its last smoke. I ran experimental pipe cleaners dipped in alcohol through both the stummel and stem. Both came out clean except for a bit of dust. 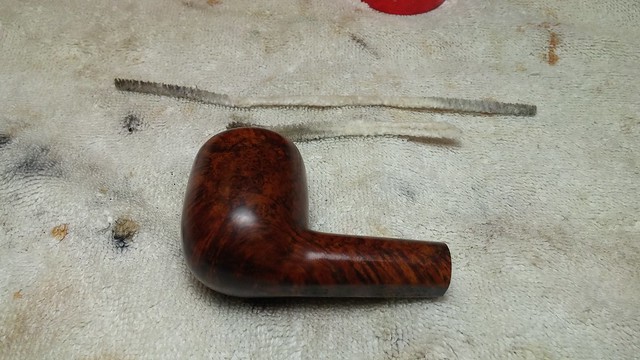 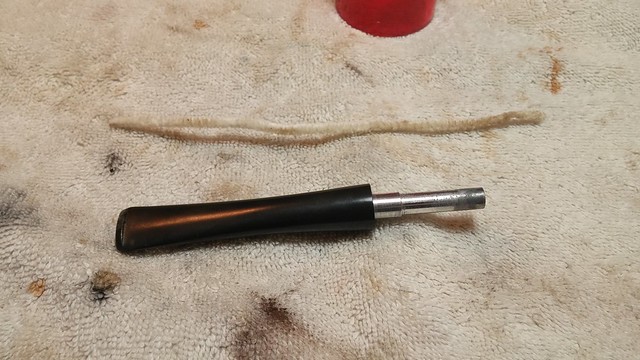 I scrubbed away the light oxidation from the stem with some Meguiar’s Scratch-X Plastic Polish on a cotton pad. A bit of oxidation at the face end of the stem shows in the pic below. It came away when I took the pipe to the buffer. 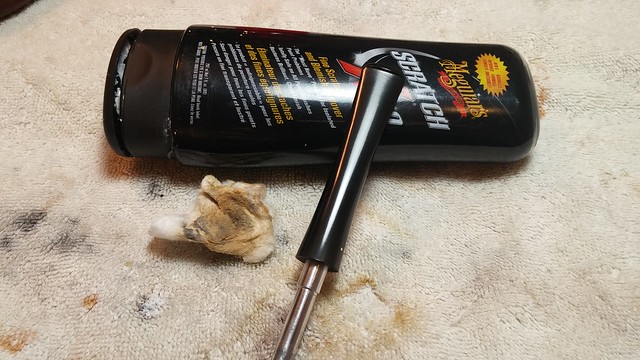 I seem to be on a bowl-coating run at the moment. Though the chamber walls of this pipe were in great shape, I decided to add a carbon coating anyway. I like the crisp, finished look, and the finely ground charcoal provides a slightly “grippy” surface that promotes the creation of a new layer of cake as the pipe is smoked.

To apply the coating, I plugged the draft hole with a pipe cleaner and then wiped a thin layer of maple syrup around the chamber. I dumped about a teaspoon of activated charcoal powder into the bowl, covered the opening with a piece of card, and gave the stummel a good shake to distribute the charcoal around the chamber evenly. I snapped this pic after dumping out the excess charcoal. 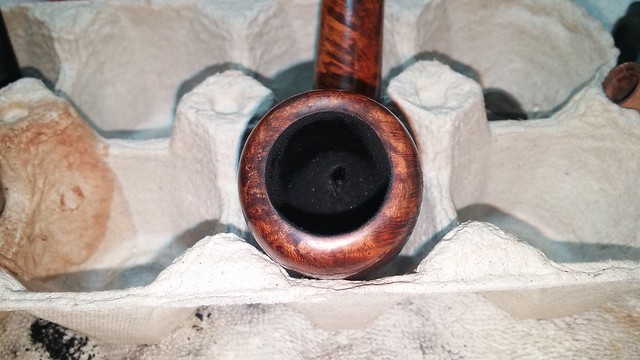 I let the bowl coating dry overnight before taking the pipe to the buffer for a run of white diamond compound and several coats of Carnauba wax.

The smooth finish on this pipe took to the wax like a duck to water. The refreshed briar shines like glass, showing off the lovely reds and browns of the contrast finish to perfection. The vulcanite stem is once again a deep, shiny black against which the 5-Dot pinning pattern sparkles like a constellation of stars.

This Brigham 503 Billiard, renewed and refreshed, has found a new home in my personal collection. I’m looking forward to packing a bowl and firing it up soon.

Thanks for following along with this restoration. If the 03 Billiard shape has caught your fancy, watch for a second example from this lot of pipes coming soon. 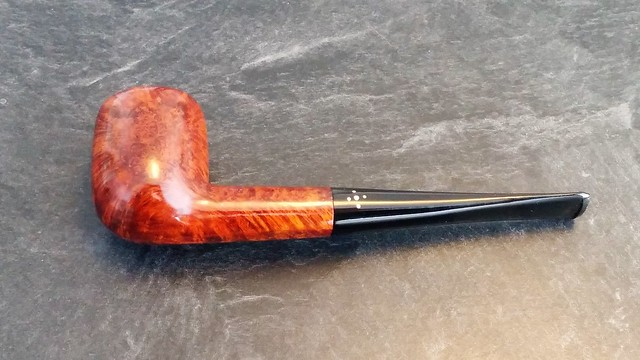 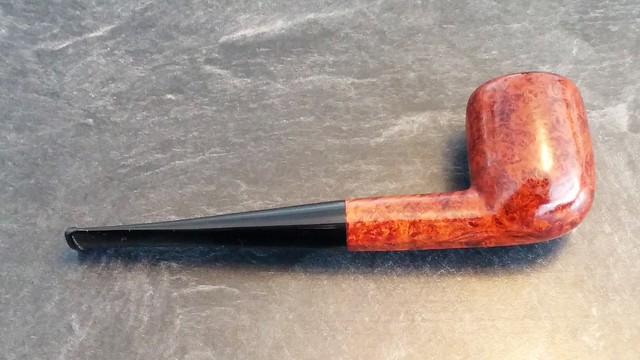 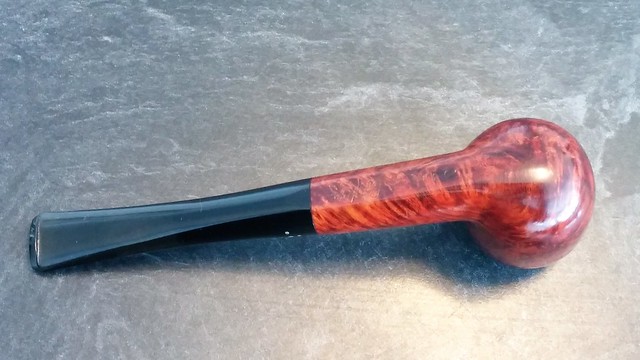 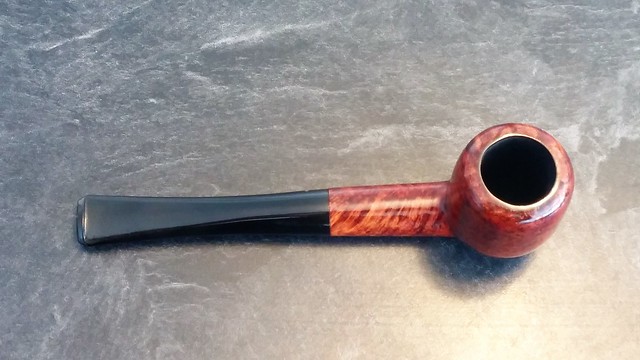 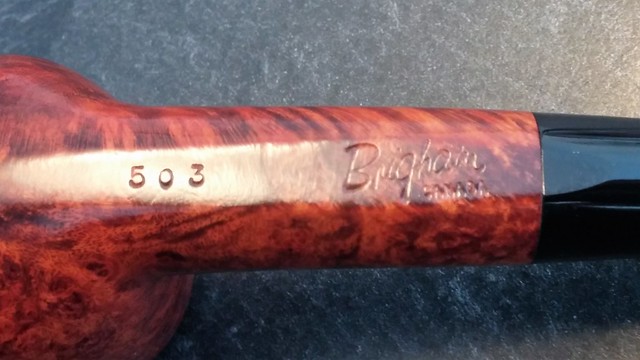 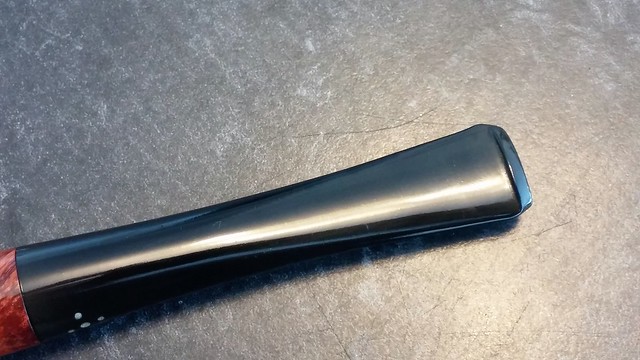 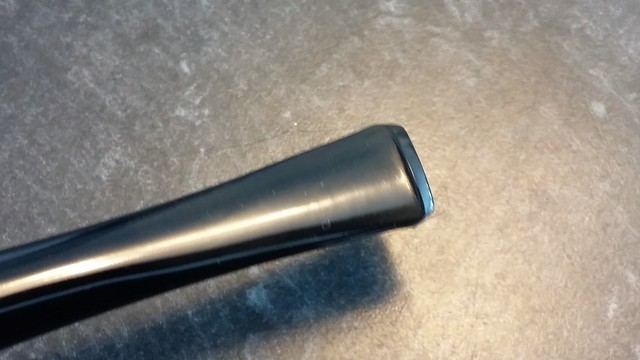 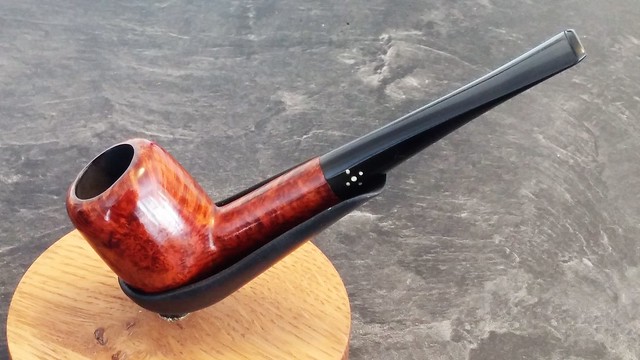 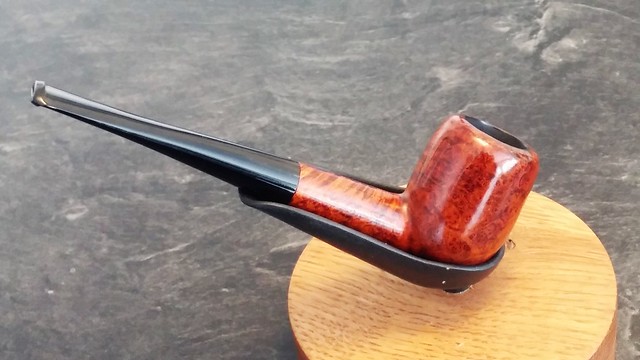 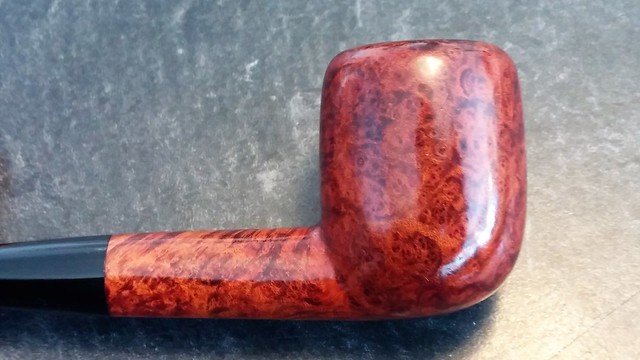 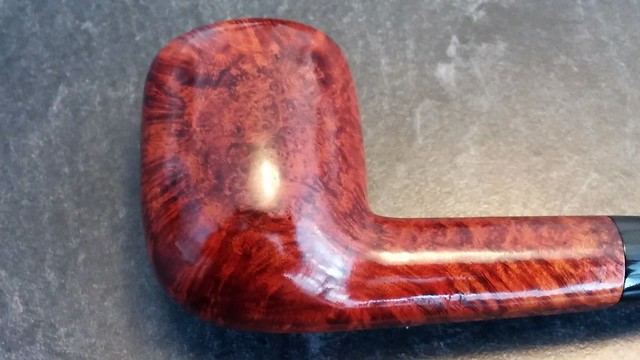 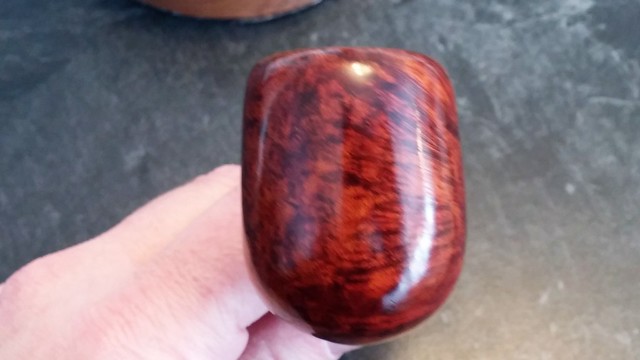 3 thoughts on “A Bevy of Brighams – Part II: Refreshing a Brigham 503 Billiard”