This smaller pipe came to me in pretty rough cosmetic condition. Marked “Willard” over “Imported Briar”. Pipedia tells us this:

“The Willard pipes were made by Sparta Industries in Sparta, N.C from 1963 to 1975 (about 60,000 pipes per week). Some were distributed by the Post and Base Exchanges that serviced the military during the Vietnam War. Others were produced for R. J. Reynolds Tobacco.”

The pipe was covered in blobs of sticky gunk and general grime, the lacquer finish was chipped and peeling, and the rim was covered in a hard, flaky layer of “lava flow” – tars and other crud produced through heavy use. The stem had considerable tooth chatter in the “bite” area, both above and below, though otherwise it seemed in good shape, with little to no oxidation. The stinger was intact and, somewhat remarkably, the stem was not overturned, lining up perfectly with the shank. The lack of oxidation should have been a warning sign for me….. 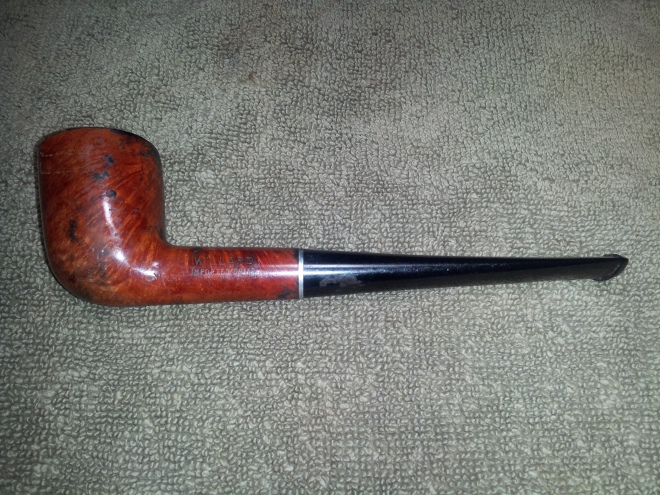 Starting the clean-up, I used a pen knife to scrape out the small amount of cake in the bowl, and then dropped the stummel into an isopropyl alcohol bath. I would normally have tossed the stem into an Oxyclean bath, but for some reason on this refurb, I decided to run an alcohol-dipped pipe cleaner through the stem first to see if the airway was clear.

This was where things got… weird.

As I slipped the prepped pipe cleaner into the end of the bit, a run of isopropyl squeezed out and ran down the stem onto my fingers. Seconds later, I realized that something felt wrong. As I pulled my fingers away to examine the stem more closely, I realized the alcohol was MELTING the stem material. I had actually imprinted fingerprints in the stem where the alcohol had softened the surface! I quickly wiped away the remaining alcohol on the stem and set it aside to dry and harden up again, hoping I could fix whatever damage I had done later.

I realized very quickly that I needed some expert advice on this one, so I fired off a (hopefully not too panicked) email to Steve Laug of rebornpipes.com, as I know he’s posted write-ups of several Willard refurbs on his blog.

While I waited to hear from Steve, I turned my attention to the stummel. Pulling it out of the isopropyl bath, I rubbed the briar in an old towel to remove whatever grime the alcohol bath had softened. Then I scrubbed the stummel with Murphy’s Oil Soap and an old toothbrush to get the rest of the dirt off. Some 0000 steel wool and a Magic Eraser took care of the rim tars and loose lacquer.

The rest of the lacquer and most of the old red stain came off with acetone (aka nail polish remover) and cotton pads.

Then I reattached the (now blessedly rehardened) stem and sanded the entire pipe with 600 – 2000 grit wet paper to remove the small dents and scratches of the last 40 or so years. I sanded the stem very carefully, as the sandpaper made very quick work on the tooth chatter (and my fingerprints, thankfully). 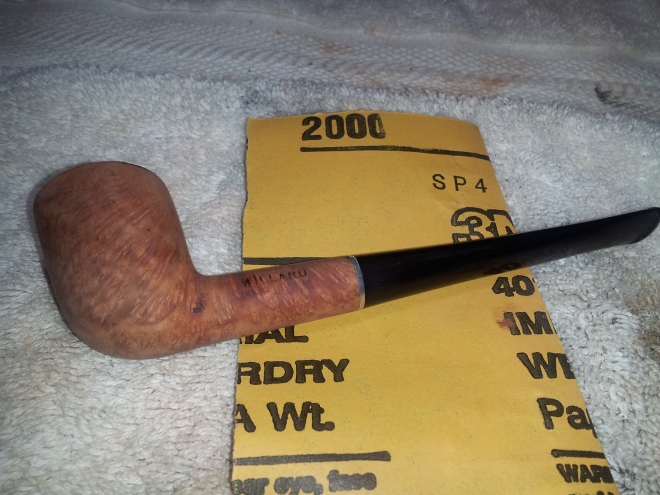 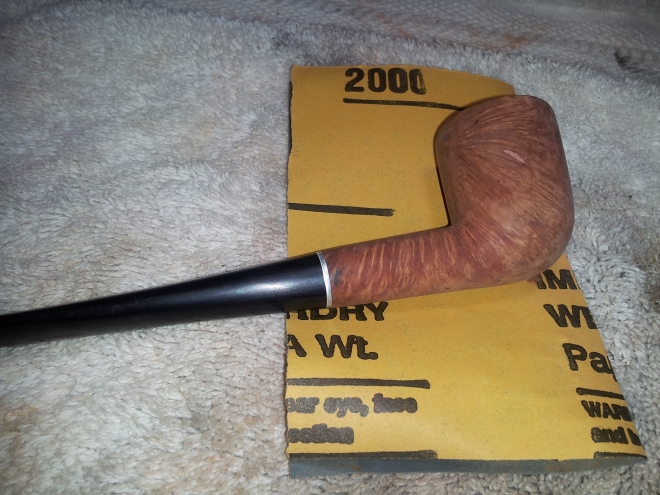 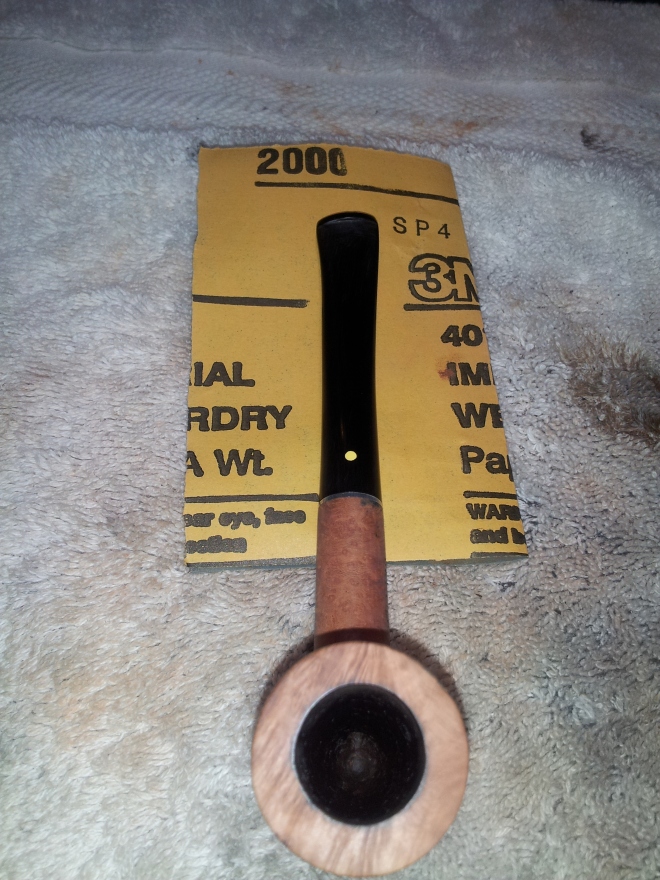 A ping in my email inbox signalled Steve’s reply. He told me that some of the early Willard pipes used stems made from a nylon/rubber compound. It came out softer than Vulcanite, but it did indeed react with alcohol. I can only guess that its use was discontinued when smokers had a hard time finding something safe to clean the stems with??

At any rate, Steve suggested using a solution of warm water and powdered cleanser (a la Comet) to clean and sanitize the stem’s airway. We also brainstormed other possibilities, which led me to a little experiment the next morning. My apologies for the lack of photos, but my attention was focused on the task at hand.

I was a bit concerned about the possibility of leaving leftover cleanser in the stem – not something I’m keen to have in my mouth, after all. So I set up a test of a few other possible cleaners to use on these wacky nylon stems. Aiming for something natural, non-harmful, cheap and readily available, I tested both lemon juice and common household white vinegar. To my joy and relief, both had no detrimental effect on the nylon stem. In fact, the vinegar in particular beaded up on the stem’s surface much like rain water on a freshly waxed car. And both test solutions are acidic enough to break down built-up tobacco tars and other residues in the pipe.

So I here humbly submit for your own testing and evaluation, my suggested approach to cleaning a nylon pipe stem. Many thanks to Steve Laug for his generous and most timely advice, without which I would probably still be staring dismally at a dirty, semi-melted pipe stem.

For heavy cleaning and sanitizing, as in the case of a new-to-you estate pipe or the long-overdue cleaning of an old favourite, Steve’s warm water and cleansing powder treatment seems in order. For lighter, regular cleaning duty, common white vinegar will do the trick. Lemon juice will also work, but I think the vinegar presents less risk of organic solids (ie lemon pulp) or sugars being left behind in the pipe. In either case a good rinse with clean water afterwards seems reasonable to remove any unwanted flavours.

Getting back to the refurb, I stained the stummel with Fiebing’s leather dye in Saddle Tan, and then, when the stain had dried, wiped it down with mineral oil to liven up the grain. 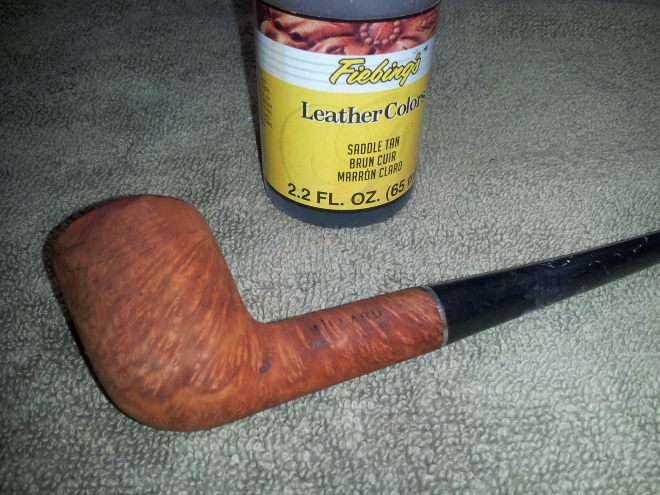 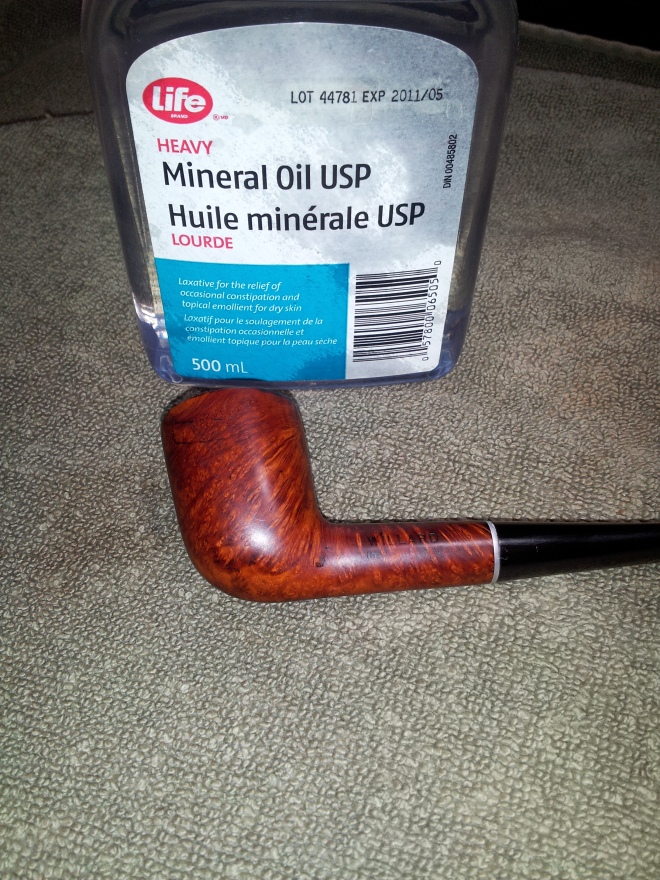 Moving my attention back to the stem, I used a series of MicroMesh sanding pads to smooth and polish the nylon, working from 3200 to 12000 grit. This very quickly removed the last traces of the “alcohol incident” and brought the shine up terrifically. 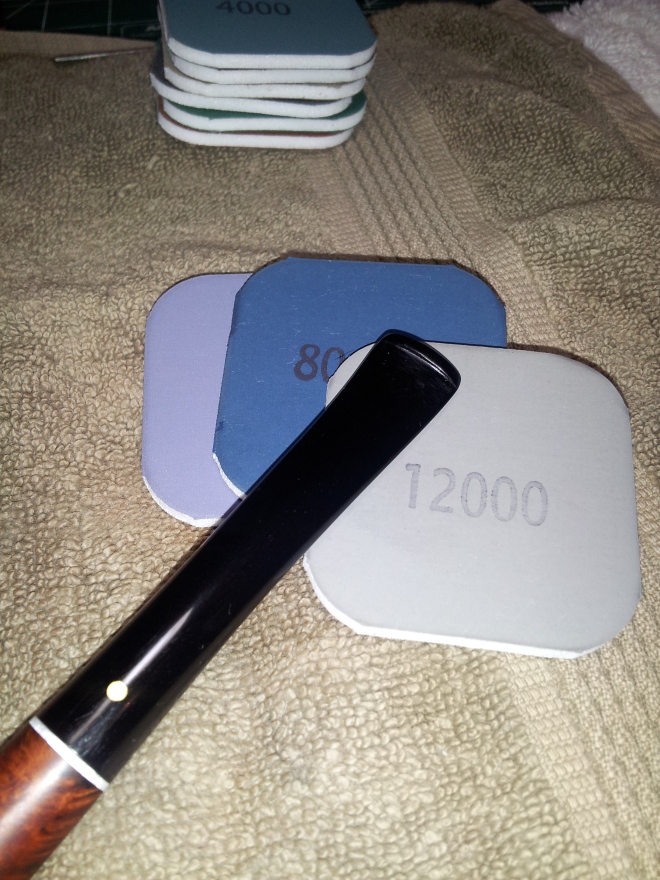 The pipe then went to the buffer for a 3-course meal of Red Tripoli, White Diamond several helpings of Carnauba wax. The finished pipe is pictured below. I’m very happy with the outcome, especially considering the setback with the stem. This pipe is ready for a fresh start with a new piper, who will no doubt enjoy it for years to come. 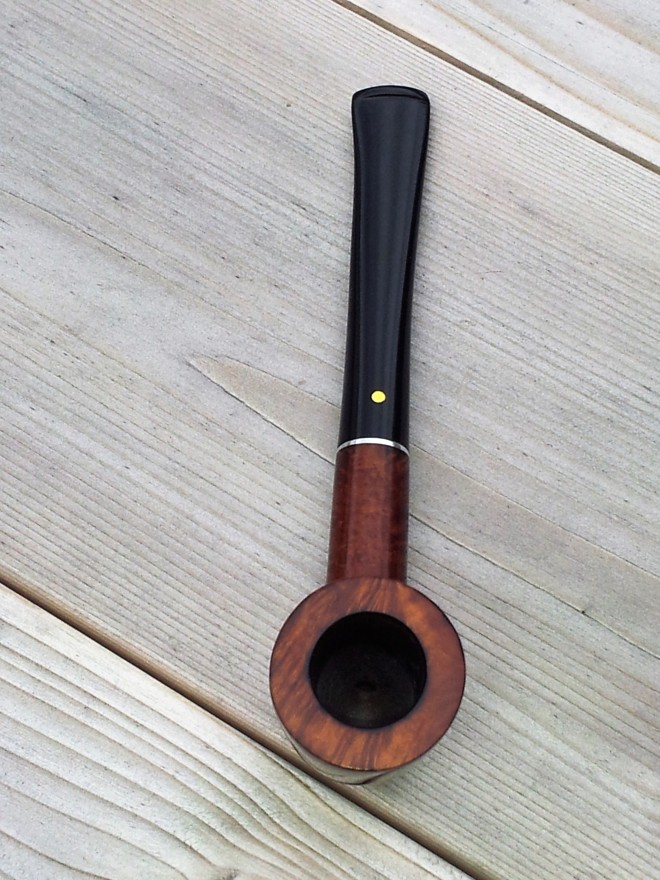