I’m excited to post this blog entry today as it marks the addition of a new shape to my collection of vintage Brigham pipes. Besides satisfying my “gotta get ’em all” fixation, this pipe also hits all the collector’s marks for age, condition and grade.

This time I’m working on a Patent Era (1938-1955) Brigham 4-Dot briar in a smooth finish and in Shape 78, which Brigham dubbed the “Townsman”. As I’ve described it in the Official Unofficial Brigham Shape Chart, the Townsman is a 1/8-bent stacked Billiard with a taper stem. It also comes from the same little “family” of tall-bowled pipes as the Shape 79 “Statesman” and the Shape 80 “Fireside”.

When I first brought the pipe to my worktable, it was in good estate condition overall, though a dent on the front rim of the bowl detracted from its sleek lines. The rest of the stummel was free from dents, dings or scratches, testament to a caring piper. 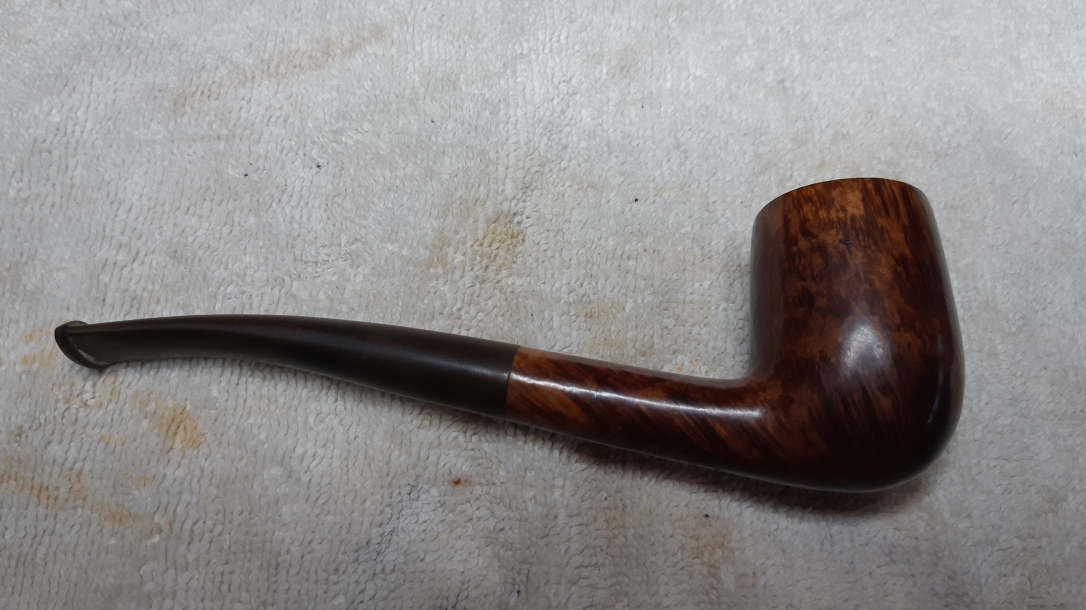 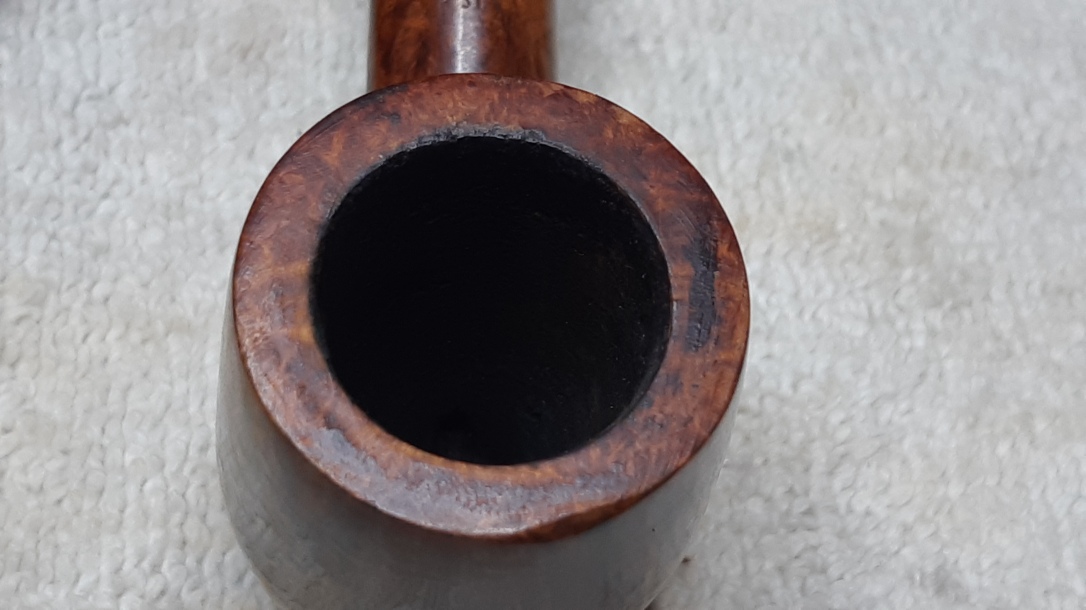 The stem on this nearly 80-year-old pipe was fairly heavily but evenly oxidized, though without any tooth dents or chatter. This pipe’s previous owner was obviously not a clencher.

The pipe is stamped with the old straight underlined “Brigham” script logo over “CAN. PAT. 372982” on top of the shank, while the underside of the shank carries the shape number, “478′, indicating a 4-Dot “Brigham Director”grade pipe in Shape 78. The stem carries the corresponding four brass pins or Dots. 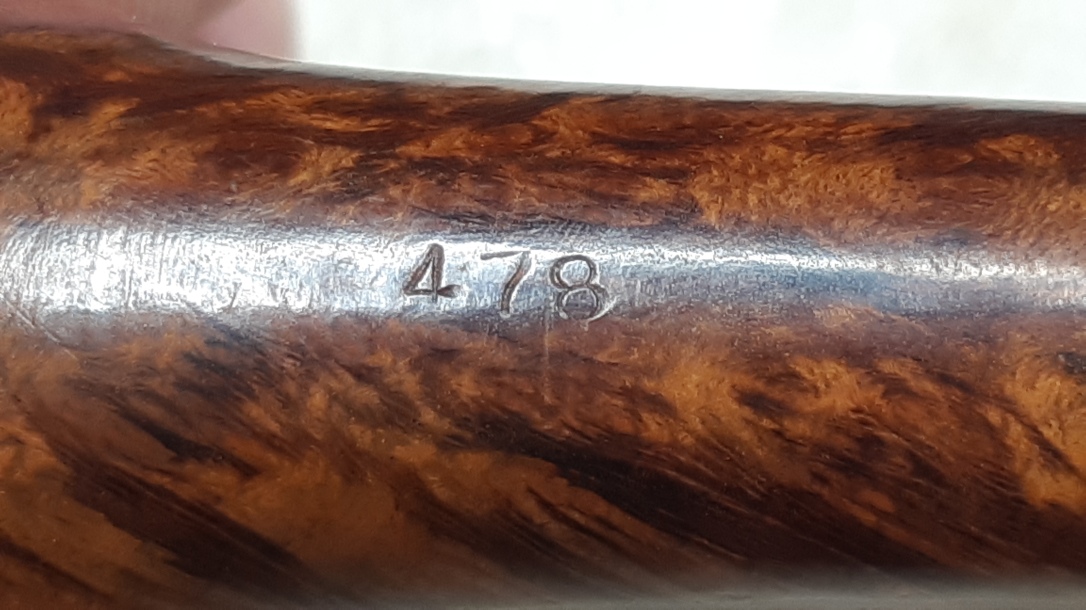 I started off the refurbishment of this old pipe by dropping the stem into a bath of Oxyclean and warm water to soften the oxidation to make it easier to remove. While the stem soaked, I worked on cleaning the stummel.

The mortise and airway proved to be pretty thickly gunked up with old tars and debris which over time had hardened along the inner walls of the airway and filter pocket. I used a drill bit slightly smaller than the airway, turned by hand, to scrape out the worst of the crud before moving on to pipe cleaners and cotton swabs dipped in alcohol. The pile of cleaners in this pic would have been much larger had I not elected to use the drill bit first.

There wasn’t much more than a light film of cake in the chamber, so I tidied things up in there with a bit of sandpaper wrapped around a Sharpie marker. I also topped the bowl very lightly on 800-grit wet sandpaper to smooth out a few small surface marks. 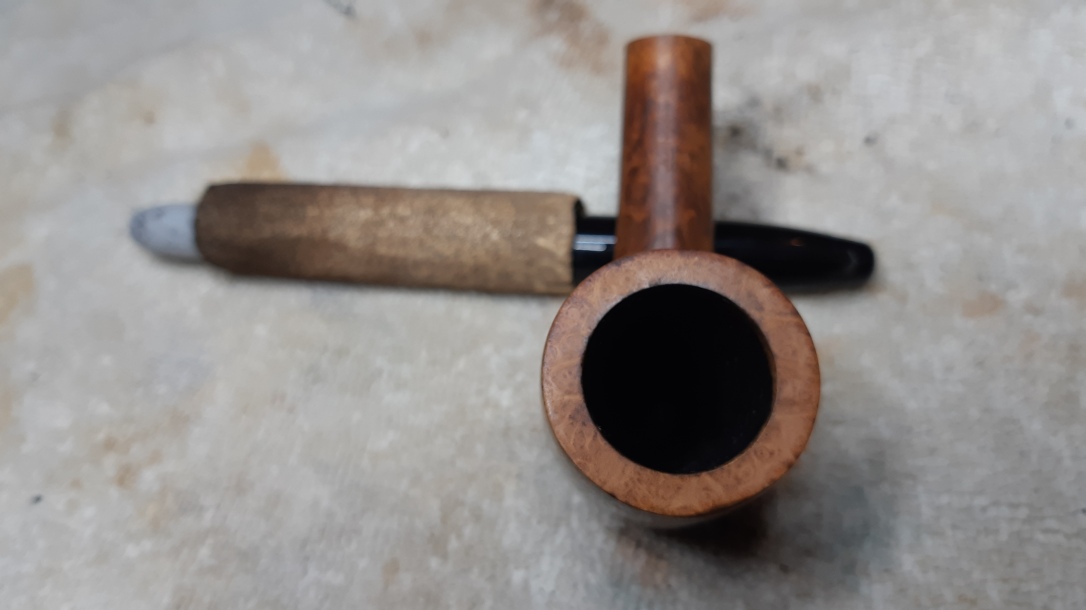 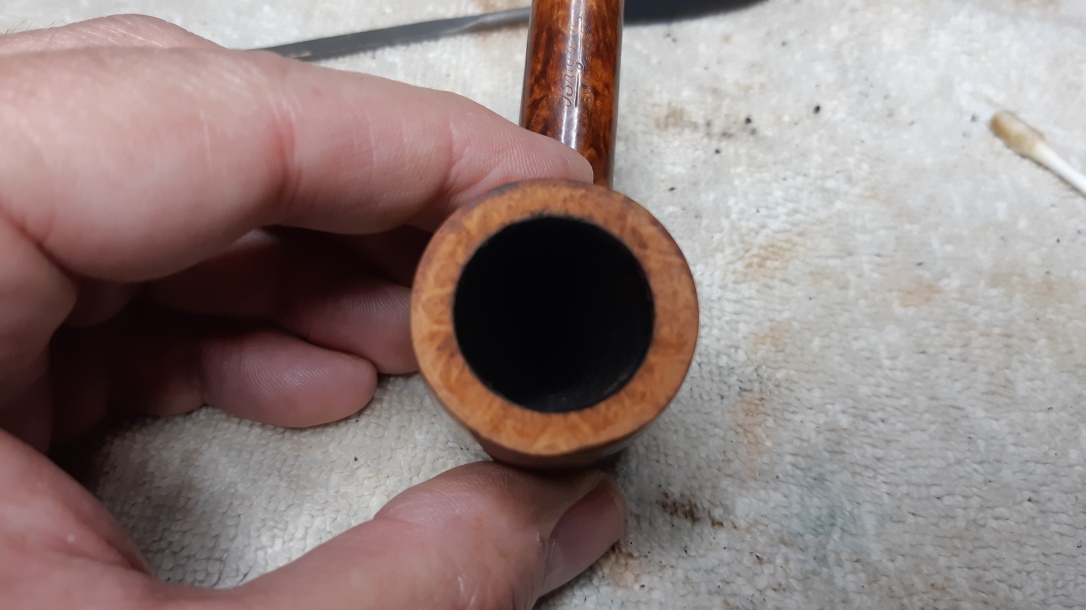 I used a bit more sandpaper to smooth out the larger dent at the front of the bowl and restore a round appearance to the outer rim. A full course of micromesh sanding pads removed the sanding marks and brought the shine up on the restored rim.

Satisfied with the state of the stummel’s internals, I moved to deal with the exterior of the briar. A quick scrub with alcohol on a cotton pad dissolved the grease, grime and dirt from the surface of the briar and revealed some lovely vertical grain.

With the briar nice and clean, I set the stummel aside and pulled the stem from its Oxyclean soak. The oxidizewd layer of vulcanized rubber was now soft and came away from the stem easily with 0000 steel wool and Magic Eraser.  A few pipe cleaners dipped in alcohol cleared the old tars from the stem’s airway. 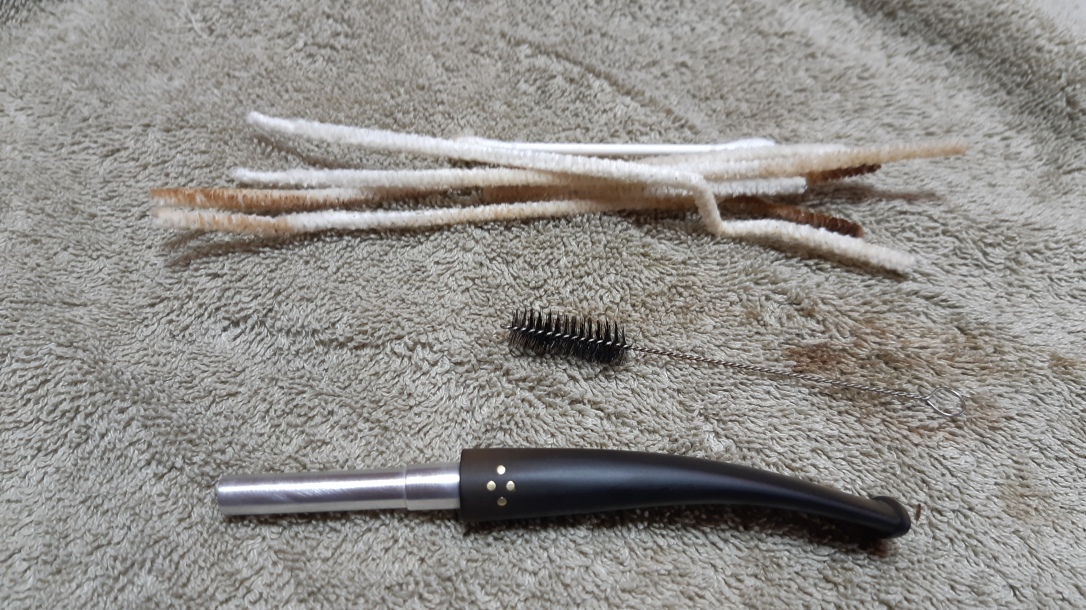 I refreshed the stummel’s finish with a wash made from Fiebing’s Black and Dark Brown leather dyes. The dark wash helps to accentuate the black contrast dye in the grain without appreciably darkening the rest of the briar.

Then it was time to take the pipe to the buffing wheel. I first gave the stem a run of Tripoli compound at higher speed to remove the last stubborn traces of oxidation before polishing the rubber to a shine with White Diamond compound.

The stummel was also treated to a buff on the White Diamond wheel, where I was careful not to damage the stampings. Both stem and stummel then received several coats of Carnauba wax to shine and protect the refurbished pipe.

I’m quite pleased with the way this old Brigham came back to life on my worktable. The briar glows, the black Vulcanite stem shines, and the elegant lines of the pipe make the Townsman shape very appealing to my eye. The narrow, almost pencil, shank balances out the tall, slender bowl nicely, and the pipe sits surprisingly comfortably in the teeth. I’m looking forward to packing a bowl of something tasty into this vintage briar soon.

Thanks for joining me for another estate pipe restoration. Until next time, Happy Piping! 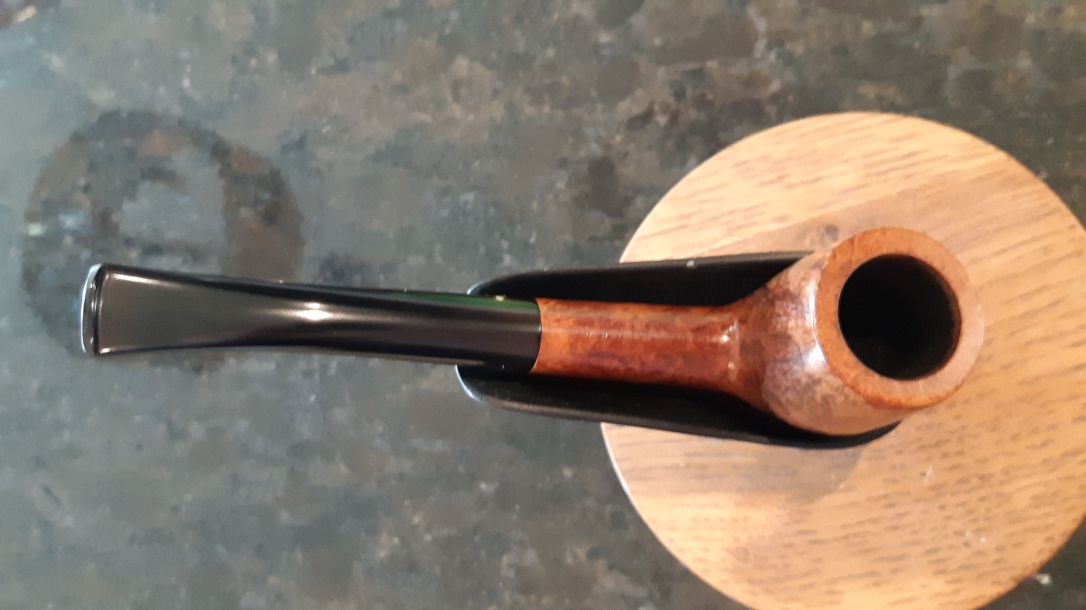 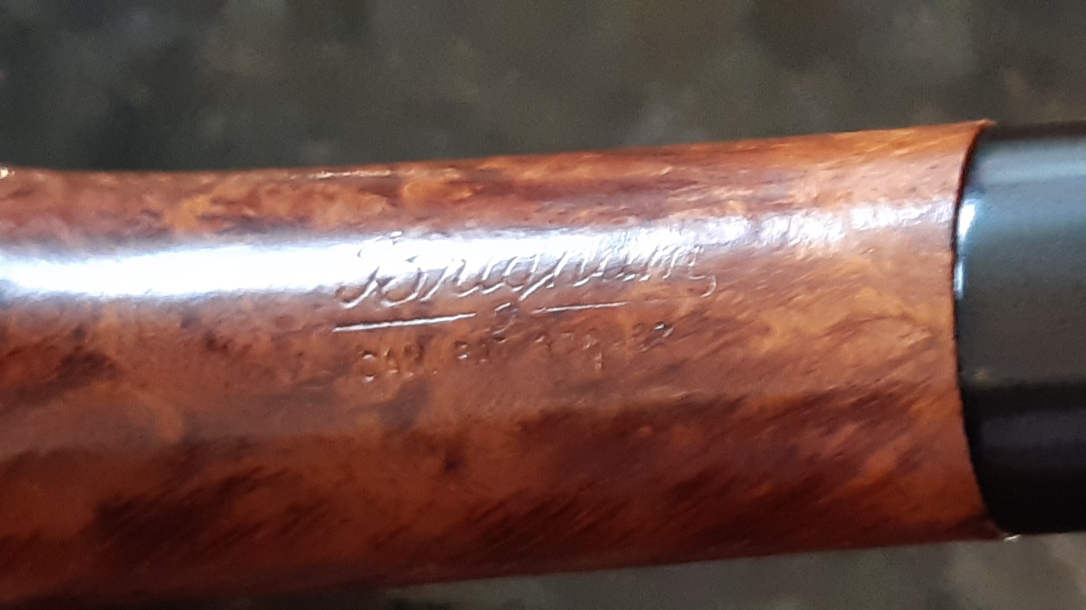 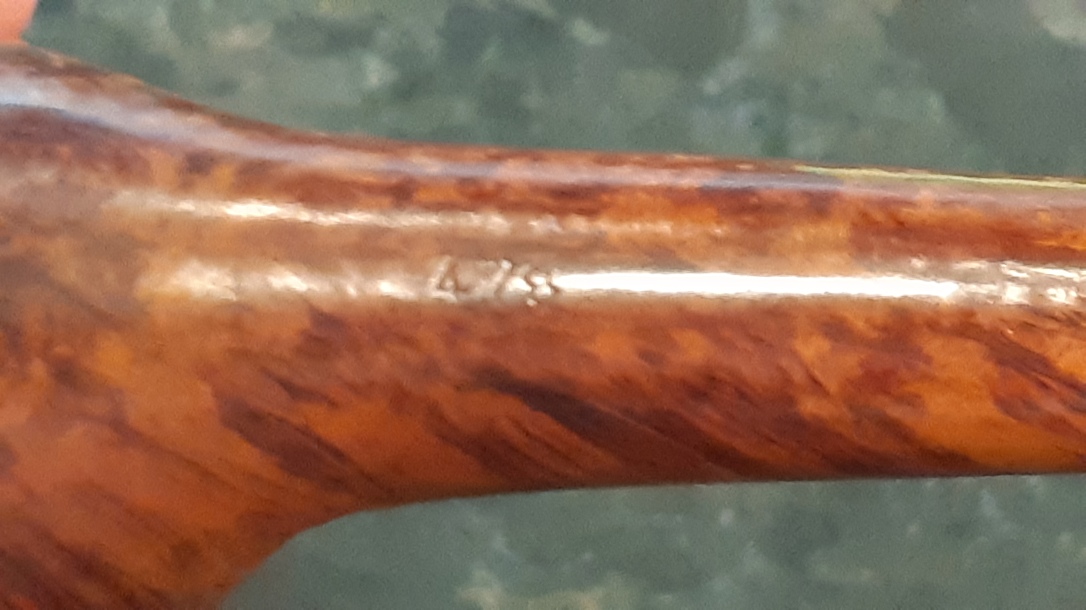