This Blatter pipe was in pretty good shape when I brought it to the worktable. Fans of large pipes will like this chunky rustic Dublin – it’s a real fistful of briar! Though of average proportion lengthwise, the extra height and width of the bowl rule this pipe out as a clencher unless you’ve got bionic jaws. 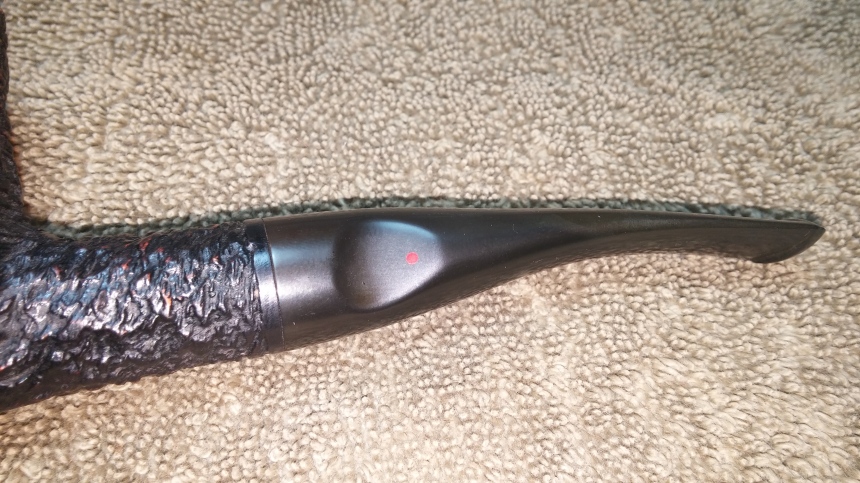 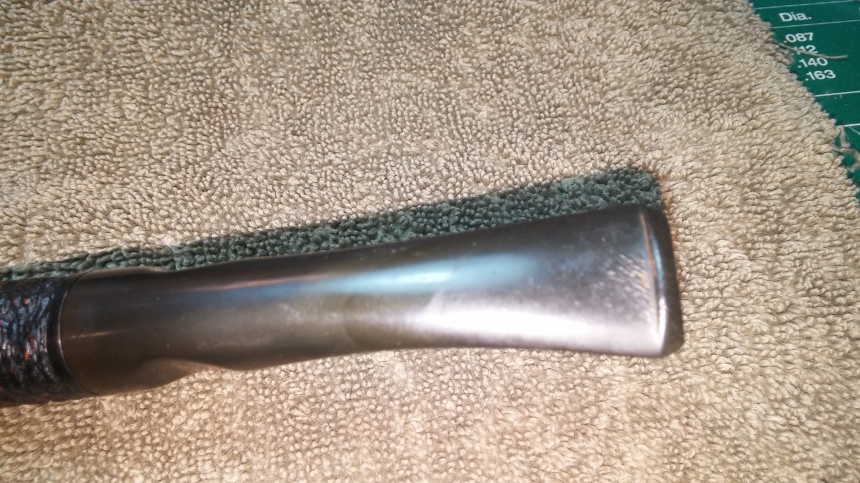 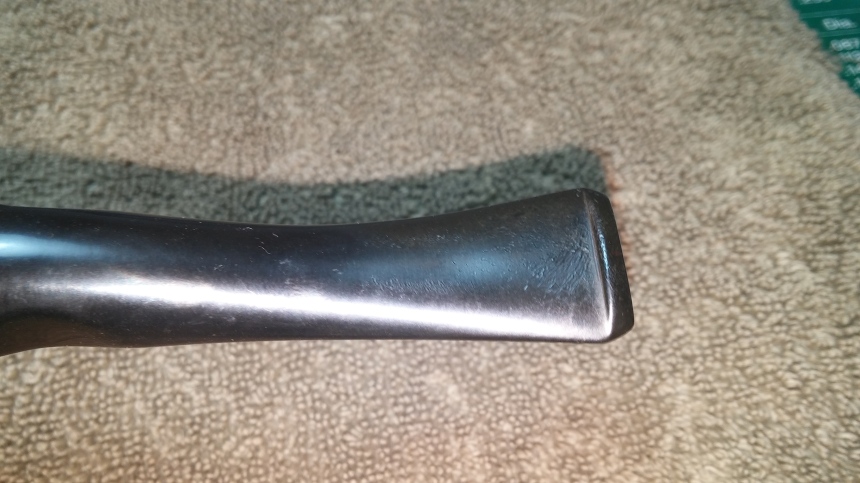 as you can see from the pics above, the pipe appeared to need very little except a general cleanup. The briar was a bit dirty and oily form handling, with dust and grime wedged into the nooks and crannies of the rustication. The wide, flat rim had some lava buildup and the finish was worn st several spots around the edges. The stem was lightly oxidized, and had some tooth chatter at the button. This would be easy to remedy; more concerning to me was that the stem was very difficult to remove from the shank. I managed to twist it off without incident, but there would be some work required to smooth out the joint there.

The flat bottom of the bowl is stamped “Blatter” over “Montreal” over “Select” over “206-83”. The number stamp indicates that this particular pipe was the 206th to come out of the Blatter workshop in 1983. 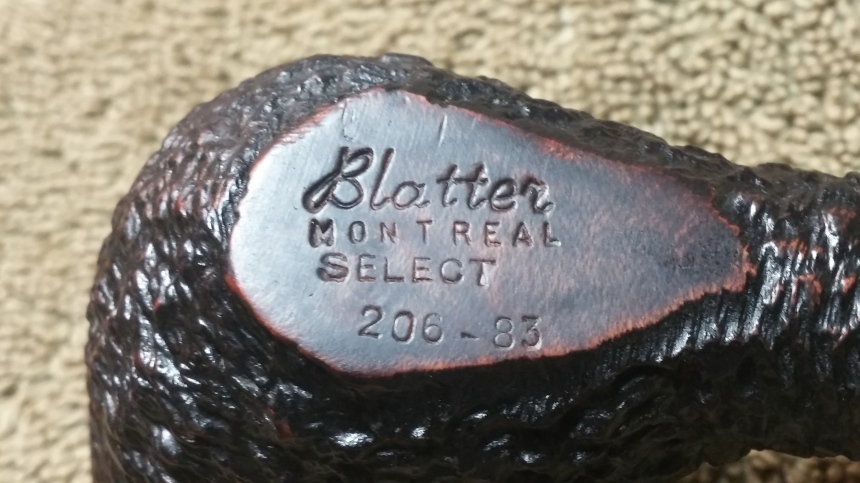 I began the cleanup by reaming the light cake from the tobacco chamber with a scrap of sandpaper wrapped around a Sharpie marker. I also used the flat edge of my penknife blade to carefully scrape the worst of the lava crust from the rim, working carefully to avoid nicking the briar. There is some lovely grain on the rim!

The inner rim was a bit gouged from careless reaming. I 320-grit used sandpaper and a fine grade sanding sponge to smooth out the damage and return the rim to round.

I cleaned the stummel’s internals with pipe cleaners and cotton swabs dipped in alcohol. There was a fair bit of tarry gunk hiding in the shank, so I used a couple of drill bits, turned by hand, to auger out the airway. The stem fit much better after all that crud was removed!

When I was happy with the state of the internals, I scrubbed the outside of the briar with Murphy”s Oil Soap and an old toothbrush to clean away the dirt, oils and wax stuck in the rusticated finish. 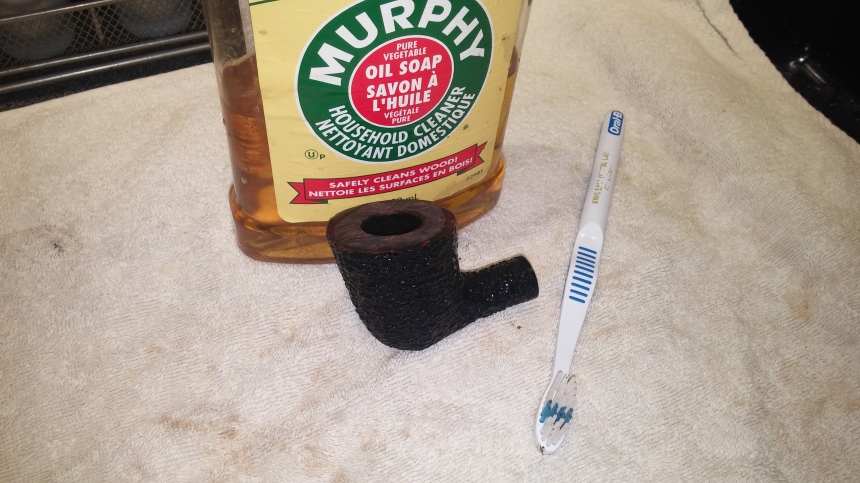 Moving to the stem, I soaked the vulcanite for a few hours in a solution of Oxyclean and warm water to raise the oxidation and soften any tars hiding in the airway. After the bath, a scrub with 0000 steel wool and Magic Eraser removed the softened oxidation and restored the stem’s deep black colour. A few pipe cleaners removed the last traces of dirt from the internals.

I used a fine-grade sanding sponge to smooth out the remaining tooth chatter on the stem. A going over with 800 and 2000-grit wet sandpapers removed the sanding marks and prepared the stem for buffing.

Before taking the pipe to the wheel, I touched up the finish with a quick wipe of Fiebing’s Black leather dye. This evened out the worn areas at rim and shank, and gave the briar a “fresh from the factory” look. 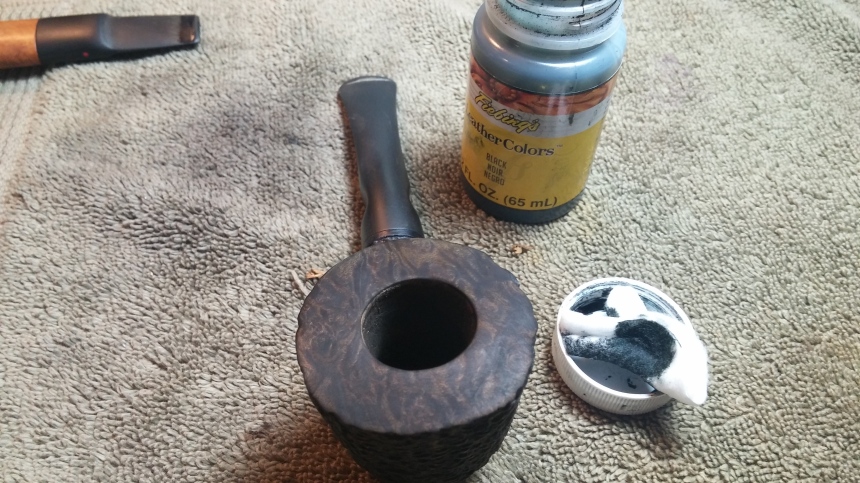 I finished off this quick refurbishment by buffing and polishing stummel and stem on the wheel with a round of White Diamond buffing compound followed by several light coats of Carnauba wax. I worked carefully with the stummel to avoid ramming compound or wax into the rustication. The stem was buffed more heavily to erase any stray sanding marks left over from the work done and to bring up a deep black glossy shine.

I only have a couple Blatter pipes in my collection, but have to admit they are growing on me. Unlike many pipe makers, Blatter doesn’t subscribe to pre-defined pipe shapes, making each pipe a unique piece. This large Dublin Sitter has been returned to its owner’s rack and rotation, where I am sure it is appreciated for both its smoking characteristics and its artistic merit.

Thanks for joining me for another pipe restoration. Until next time, Happy Piping! 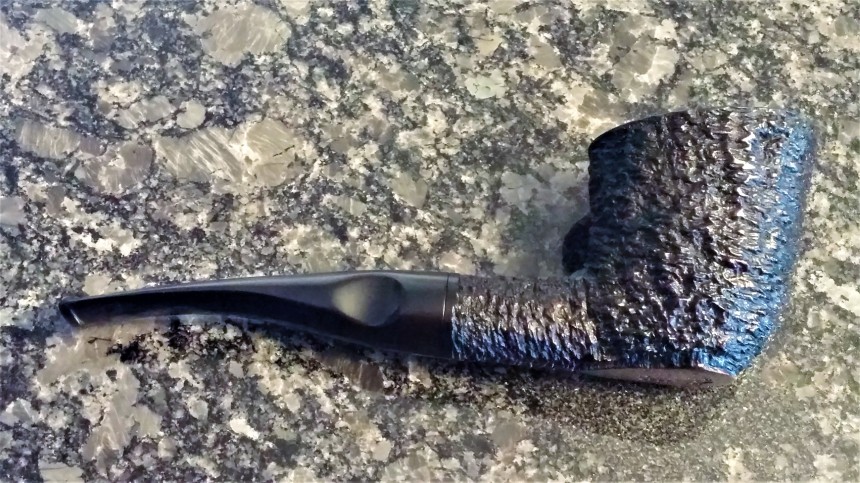 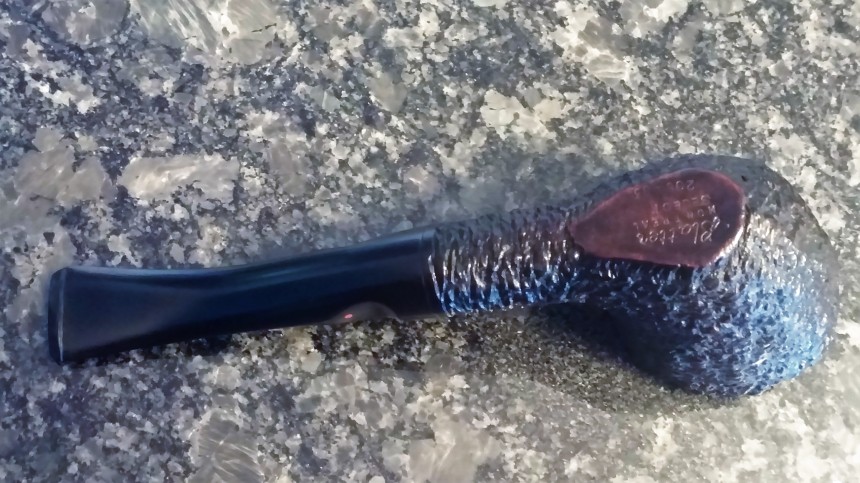 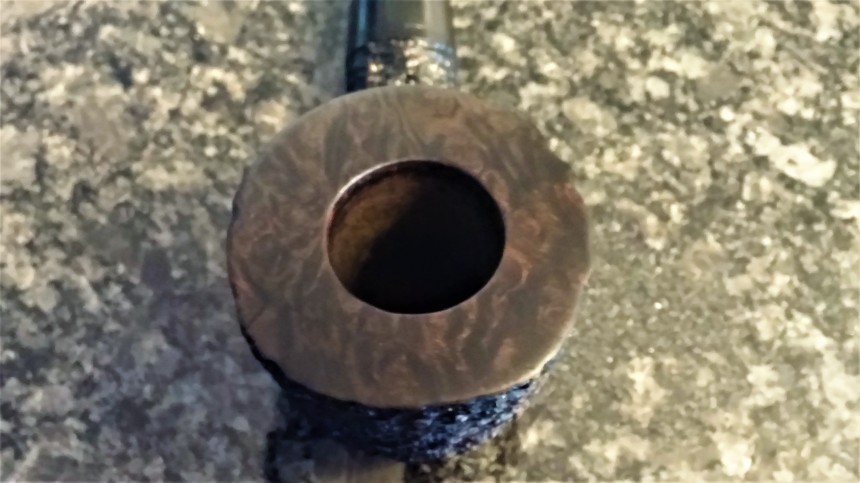 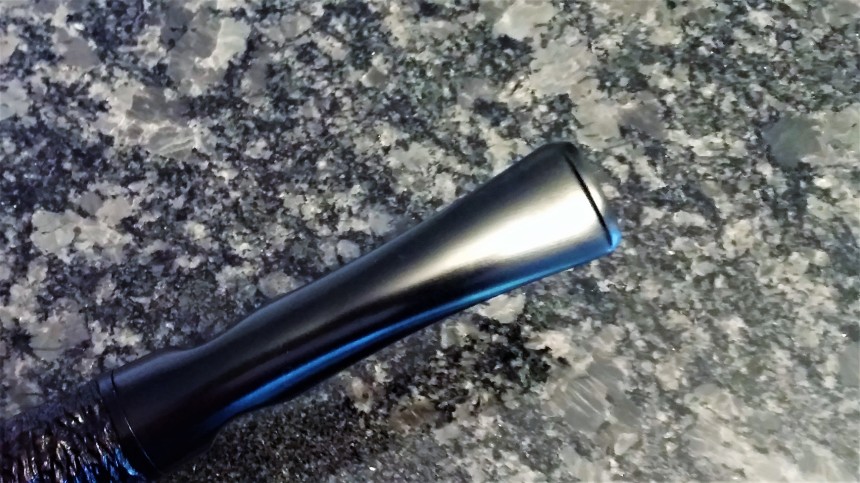