This is another of my recent antique fair finds. I added this Post-Patent Era (1956-69) Brigham Executive (3 Dot Vertical) 609 Apple to my bag along with the pair of Brigham Norsemen I wrote up last week. It was a good hunting trip!

The Brigham Executive grade of pipe, pinned with 3 vertically aligned Dots, fits between the Brigham Exclusive (aka the “normal” 3 Dot) and the Brigham Director (4 Dot) grades in the original Brigham system, even though it is stamped with a 600 series shape number. To get a sense of the difference between the Executive and Straight Grain (6 Dot) series, compare this pipe to the Brigham 613 I restemmed in this post back in January.

That comparison is not meant to detract from this pipe in the slightest; this 609 Executive is a smart-looking partially rusticated Apple. It arrived on my worktable in fair shape. The bowl held a mix of carbon cake and unsmoked tobacco, and the rim was hiding under a layer of tobacco tars so I couldn’t see the briar underneath. The pipe’s stem was oxidized and there were some fairly significant bite marks on both top and bottom of the bit. The aluminum tenon/filter holder was in good shape despite having had a very dirty Rock Maple filter left in place for who knows how long. 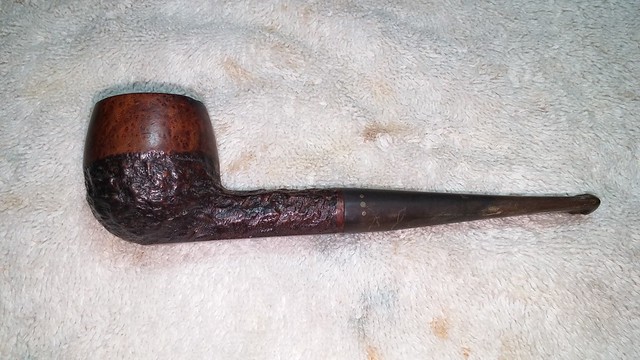 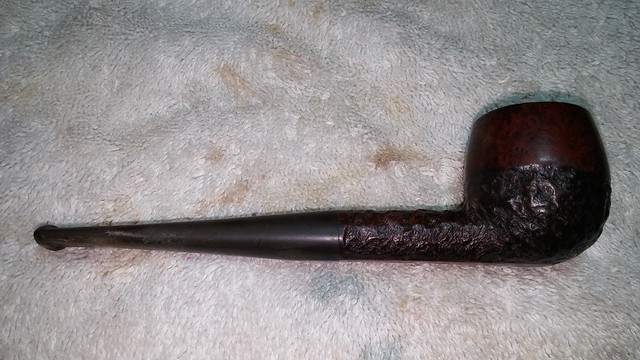 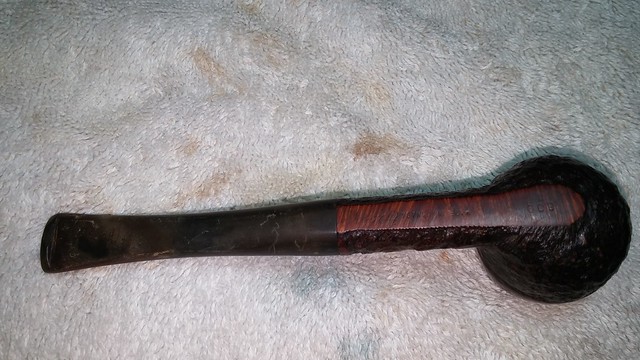 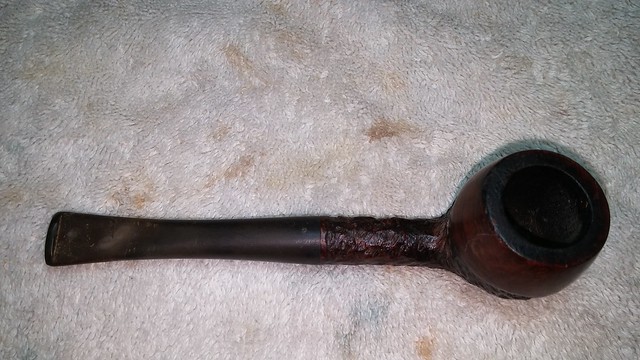 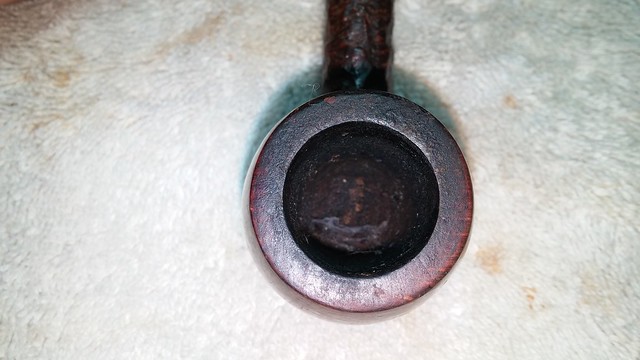 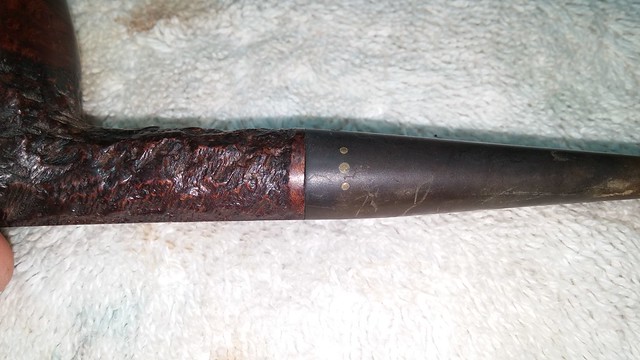 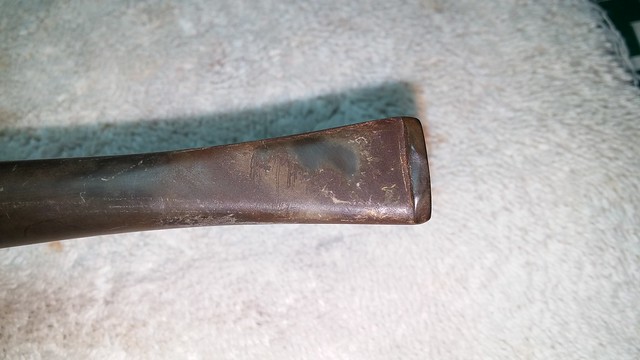 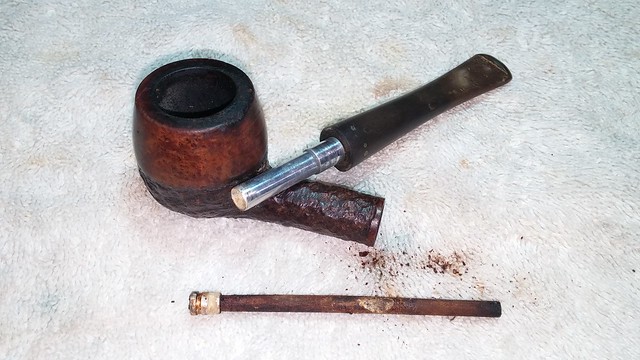 The flat underside of the shank is stamped “609”, then “Made in Canada” in block letters followed by the thin-script Brigham logo. 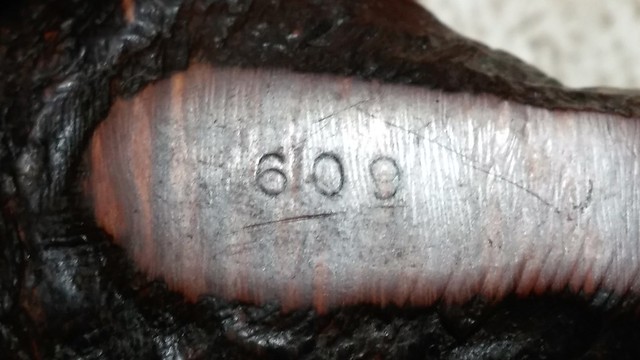 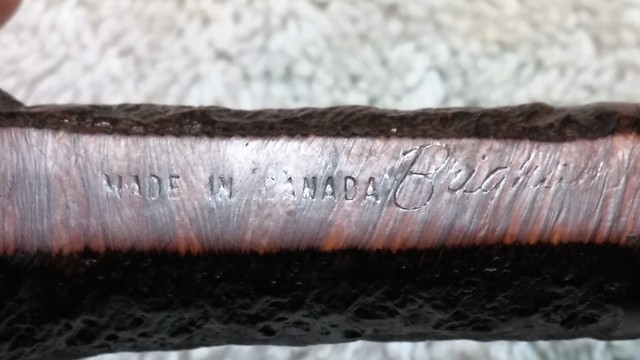 I ran a pipe cleaner through the stem to ensure the airway was open before dropping it into a bath of Oxyclean and warm water to soak and soften the oxidation and grime on the surface of the stem. 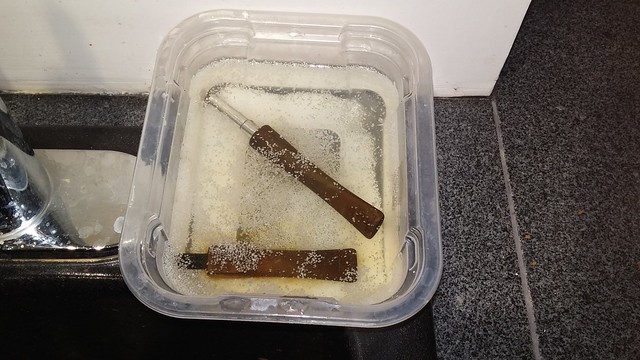 The tobacco chamber turned out to be in excellent shape after I reamed the cake and old tobacco out of there. 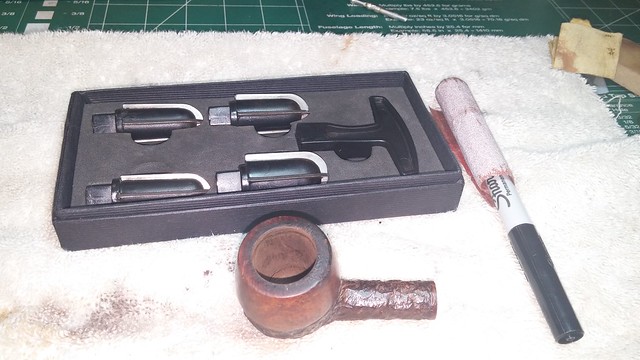 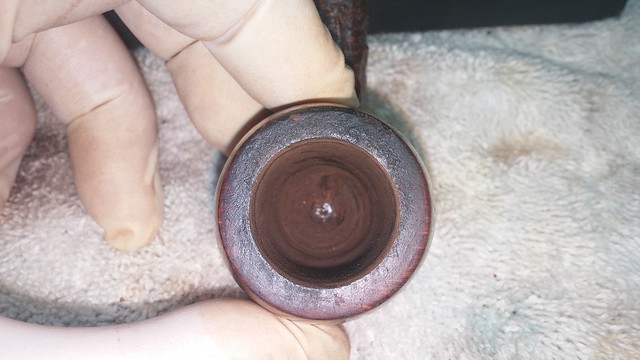 I topped the bowl lightly to remove the worst of the rim tars so I could inspect the briar. Sadly the tars had been covering a burn mark on the rear left of the bowl (the one o’clock position if the shank is noon). The outer rim of the bowl had a chunk missing at the burn site. At some point the previous piper had had a lava flow in that spot. I topped the bowl a bit more and took this picture to show the extent of the damage. 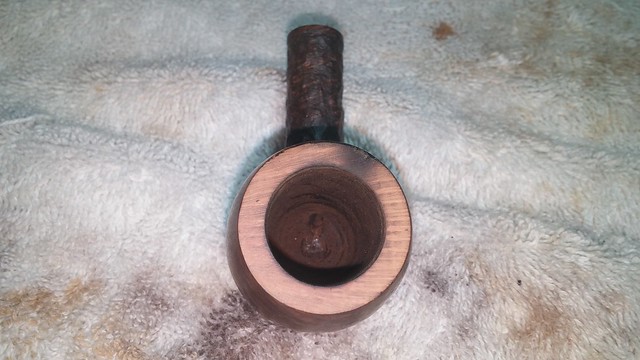 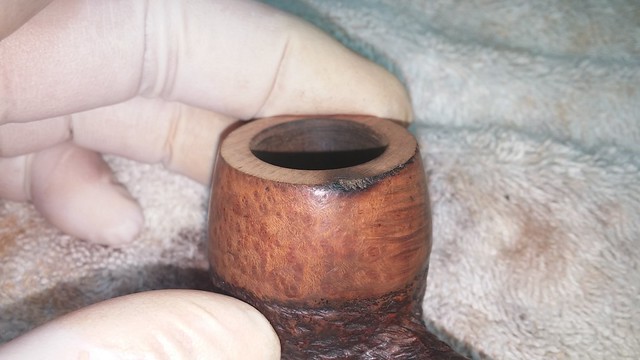 Before dealing further with the rim damage, I decided to clean the internals of the stummel. It wasn’t in bad shape, surprisingly. I used the square end of a flat needle file to scrape the worst of the gunk from the mortise, and then finished off with pipe cleaners and cotton swabs dipped in alcohol. 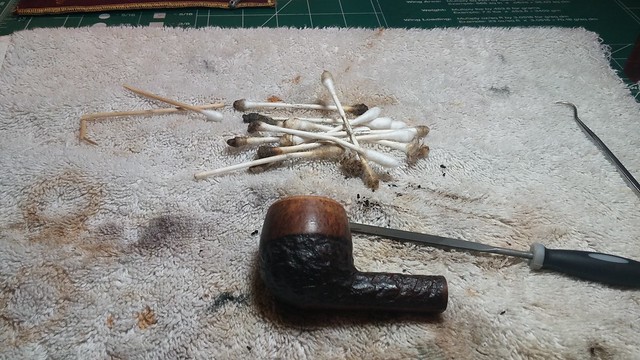 Moving back to the rim, I used 220 and 320 grit sandpapers to bevel the outer rim of the bowl, erasing the missing chunk and significantly decreasing the burn mark. I did work on the burn mark a bit more after this picture, but didn’t want to remove much more briar. The burn is still visible in the final pics but is a mere ghost of its former self. 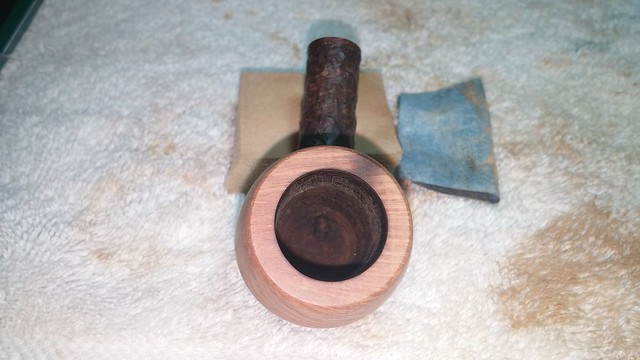 A few scribbles with light and medium stain pens matched the rim colour to the rest of the bowl. 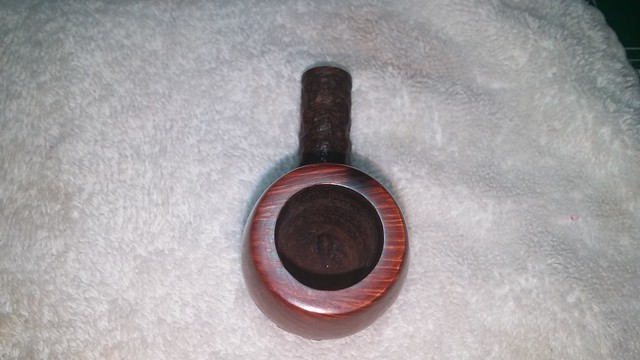 Then it was time to clean up the stem. I pulled it from the Oxyclean bath and scrubbed away the oxidation with 0000 steel wool and Magic Eraser followed by a good cleaning of the airway with pipe cleaners, cotton swabs and more alcoho. It was surprisingly dirty in there compared to the stummel. 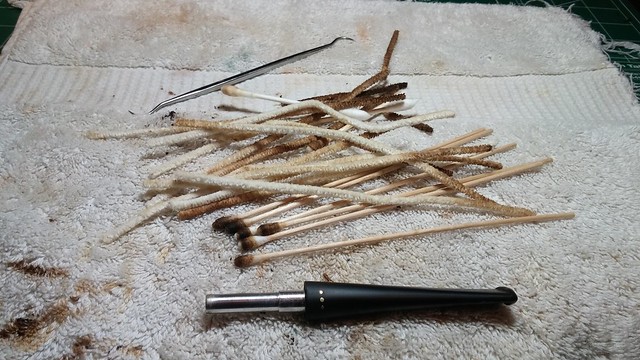 The tooth dents at the bit got filled with thick CA glue mixed with charcoal powder. When the glue had set, I used needle files, sandpaper and sanding sponges to shape, level and smooth the repair 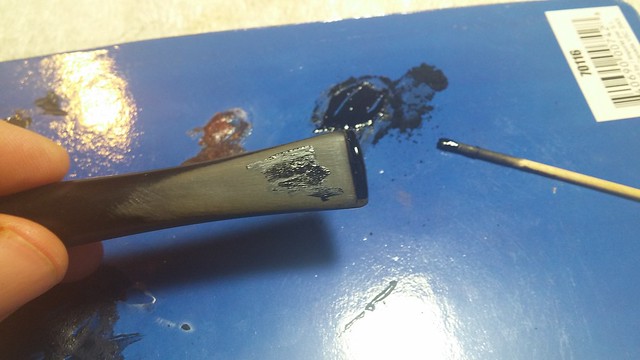 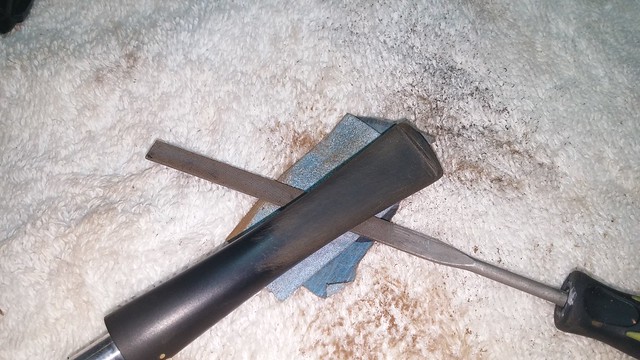 I gave the stem a full course of 1500-12000 grit micromesh sanding pads to remove the coarse sanding marks and polish up the repaired vulcanite. 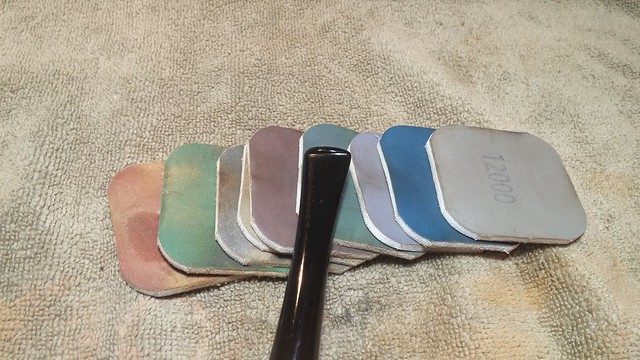 Then the pipe was buffed with White Diamond compound and given several coats of Carnauba wax to finish up the restoration. This Brigham Executive 609 is back in the saddle and ready for action.

I like the partial rustication on this pipe. It shows off the grain of the briar nicely and provides a pleasant contrast to the rougher lower bowl and shank. The glossy vulcanite stem adds a second counterpoint to the texture of the pipe, and the brass dots shine against the black background.

The rim scorch is still there if you choose to look for it, but I’m happy with the way that repair turned out. I’ll be holding on to this pipe for my own collection; the drilling is spot on, and judging by the obvious use it experienced by its previous owner, it should be a good smoker. 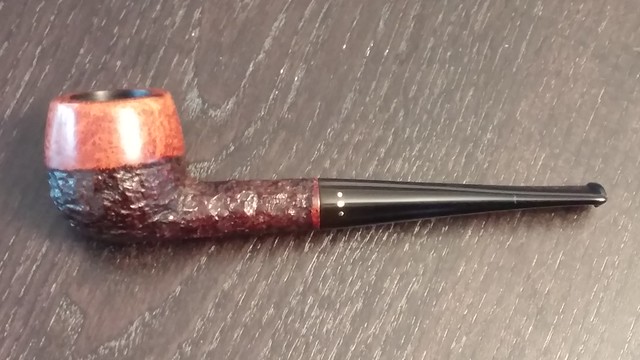 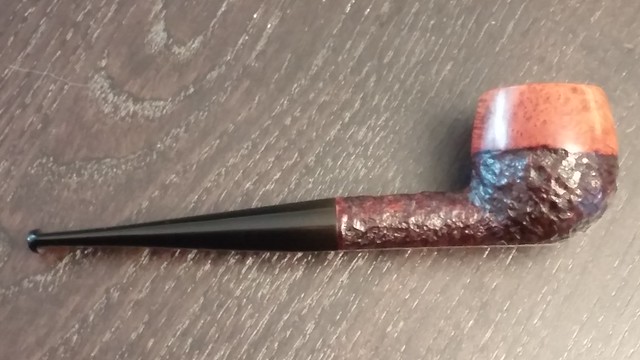 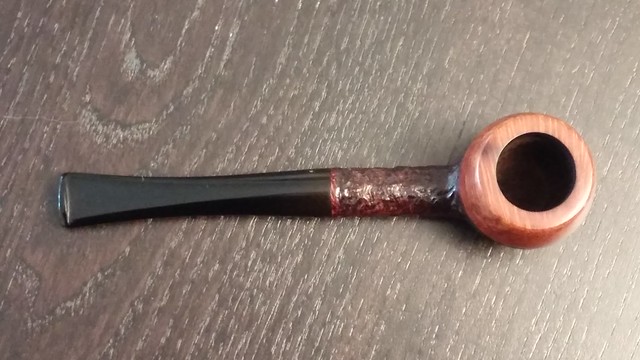 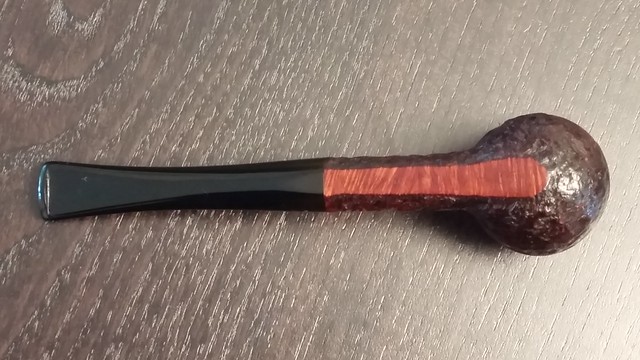 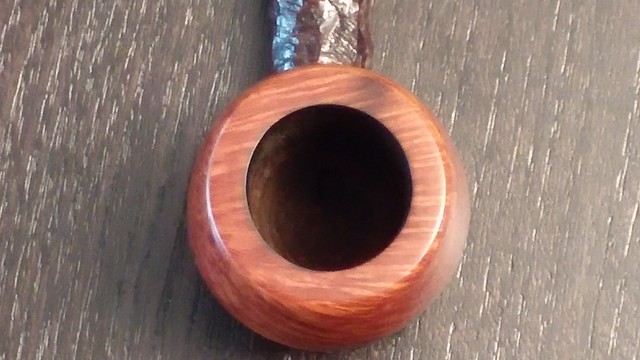 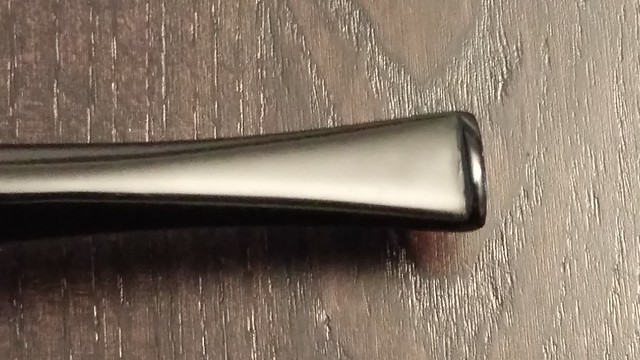 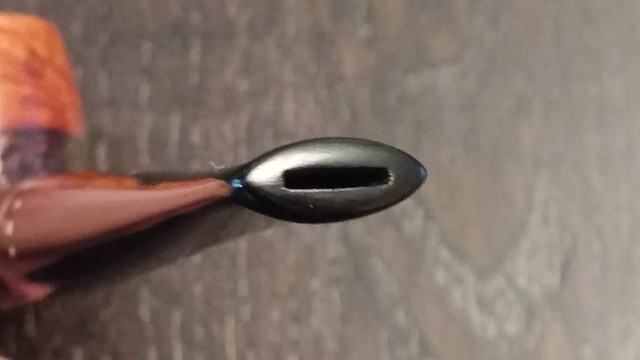