This medium sized bent meerschaum is the third of five meers from my recent estate lot purchase. It is much smaller than the Egg & Claw meer I wrote about here, but I think many pipers will appreciate its more manageable dimensions. The pipe is carved from a single block of meerschaum in a tulip (rosebud?) and leaf design. A foot at the base of the bowl allows the pipe to sit upright on its own.

The pipe arrived on my worktable in good used condition. As with the Egg & Claw pipe, the bowl of this Tulip has been allowed to collect a fairly thick layer of cake which I’d have to remove. The rim of the bowl also had a bit of buildup, but otherwise the stummel was in good tick. The meerschaum has also started its characteristic colouring, a gold-tan blush that stretched from the shank towards the bowl. The stem showed tooth chatter and oxidation, but no major issues. 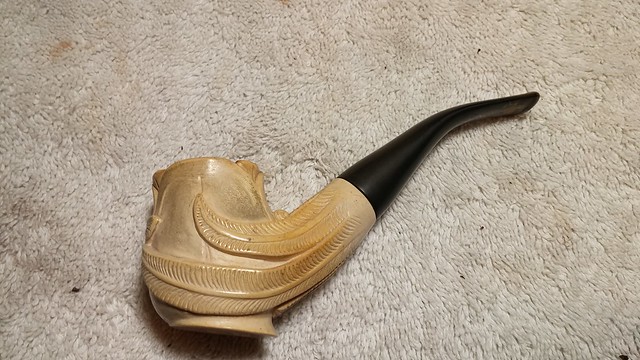 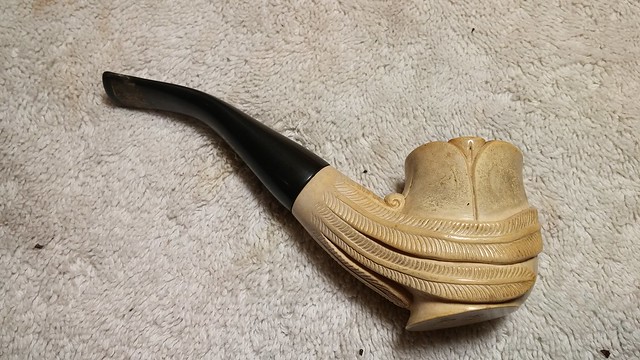 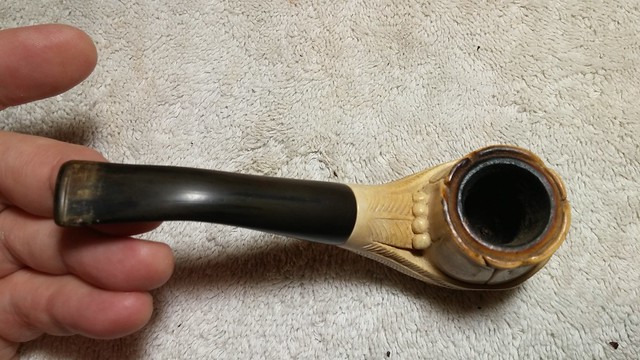 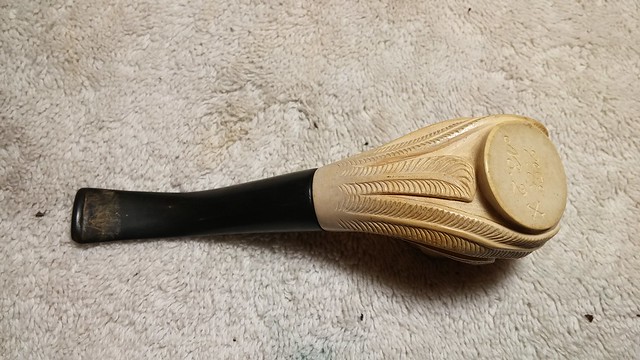 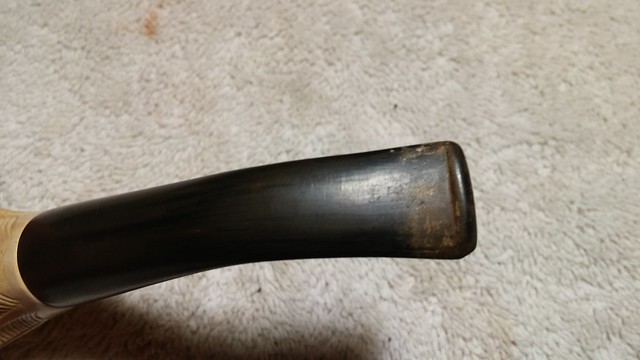 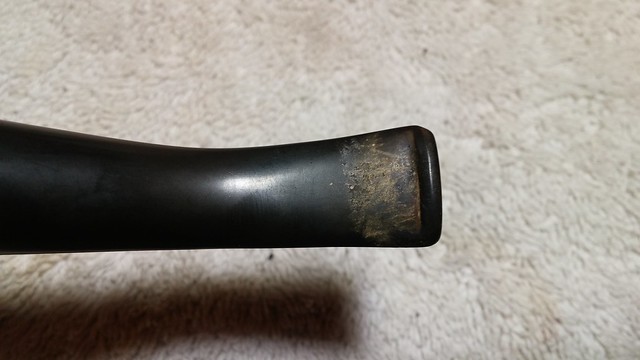 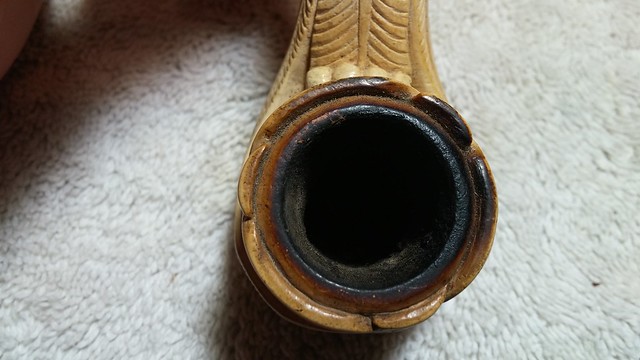 Unlike the other meerschaum pipes I’ve cleaned up from this collection, this pipe is signed. The bottom of the foot is engraved with the initials “V.V.” over “No.2” beside a pair of crossed arrows. I have no idea who the carver is, but I believe that the same craftsman created all four of the carved meerschaum pipes in the collection. 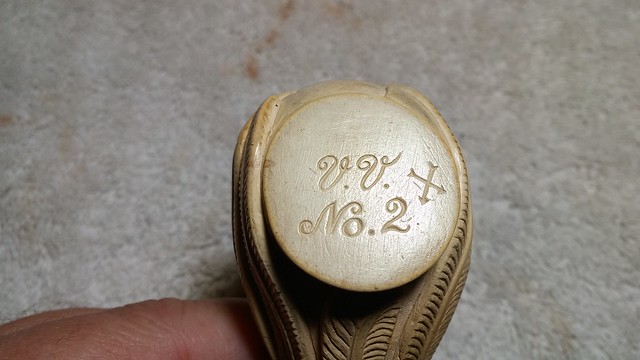 I started this refurbishment by removing the cake from the bowl. I used my pen knife and some coarse sandpaper wrapped around a suitably-sized Sharpie marker to clear the carbon buildup. Unlike a briar pipe, a meerschaum pipe needs no cake to protect it from the heat of burning tobacco. 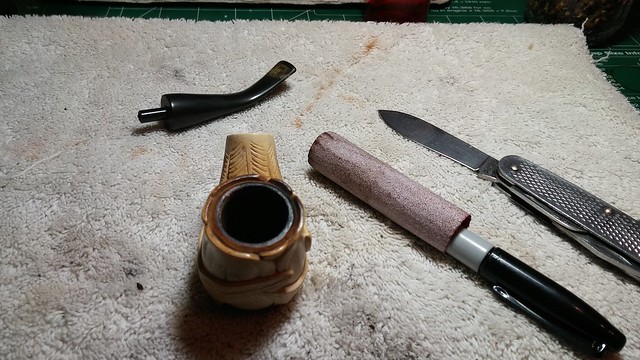 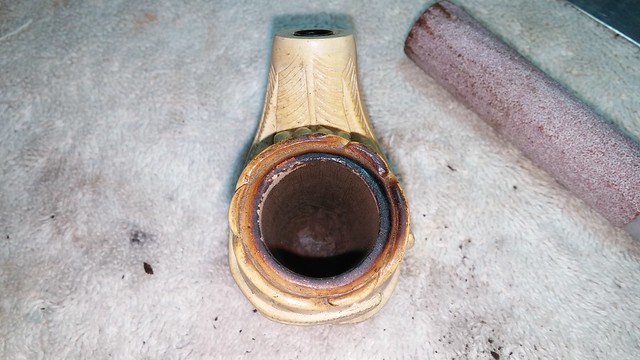 Pipe cleaners dipped in alcohol cleaned the accumulated tars from the mortise and airway. There was a fair bit of gunk in there! 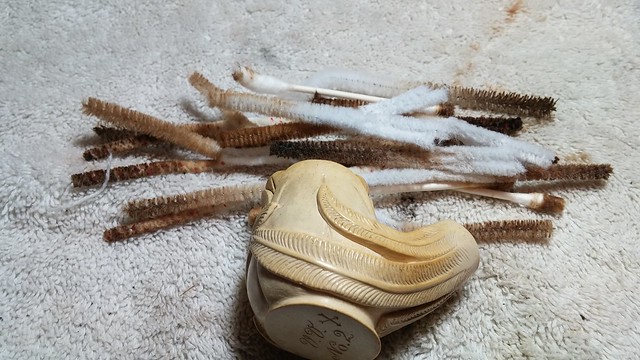 Ironically, it only took three pipe cleaners to spruce up the airway through the stem. I used Meguiar’s Scratch-X polish to clean the exterior of the stem. The oxidation was a bit heavier than Meguiar’s could handle, so I dropped the stem into an Oxiclean bath to soak. After a few hours, the oxidation could be scrubbed off with 0000 steel wool and Magic Eraser. 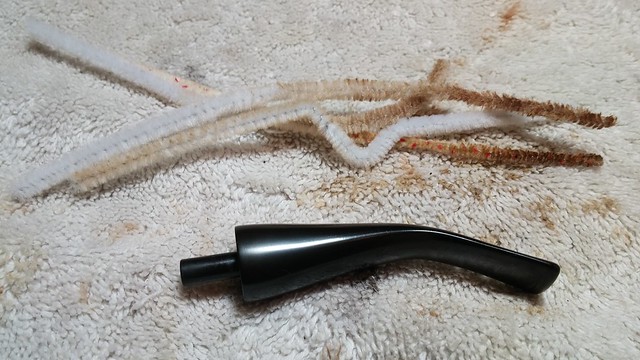 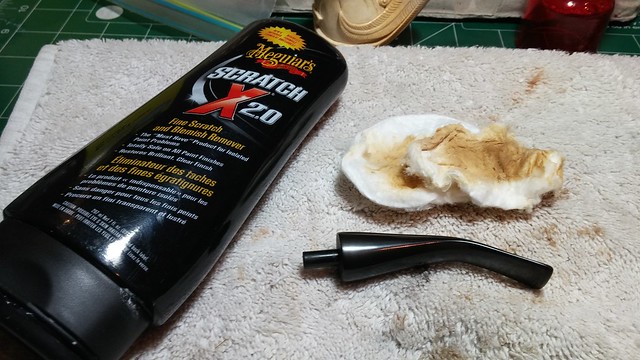 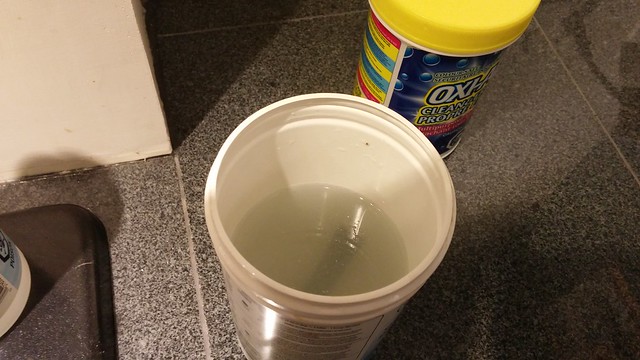 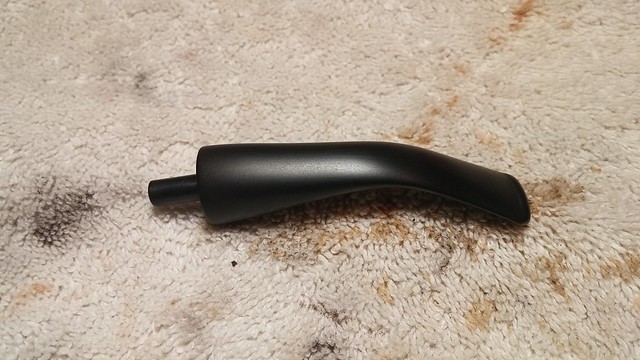 While the stem was enjoying its soak, I tackled the lava on the rim of the bowl. Q-tips dipped in alcohol made relatively quick work of the job. 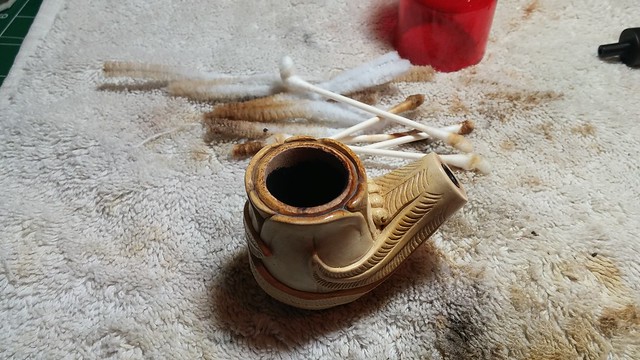 Salt/alcohol treatments and retort cleanings are a big no-no for meerschaum, so the stummel was now as clean as it was getting, but the finish was a bit worse for wear. I re-waxed the meerschaum with beeswax to give the pipe an even shine. The wax will also improve the pipe’s ability to colour during use.

To facilitate waxing, I dropped a lump of beeswax into a small Mason jar and melted it by the simple expedient of aiming my heat gun at it for a few minutes. The gun was then used to heat the meerschaum. 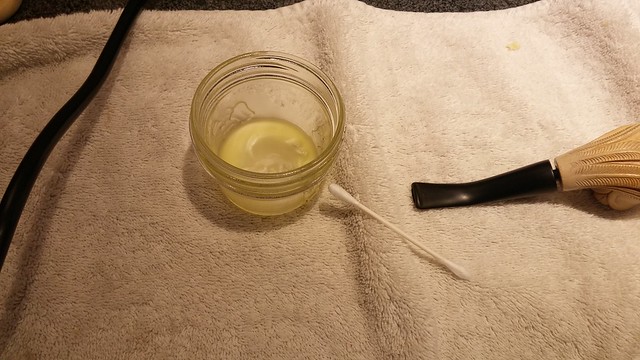 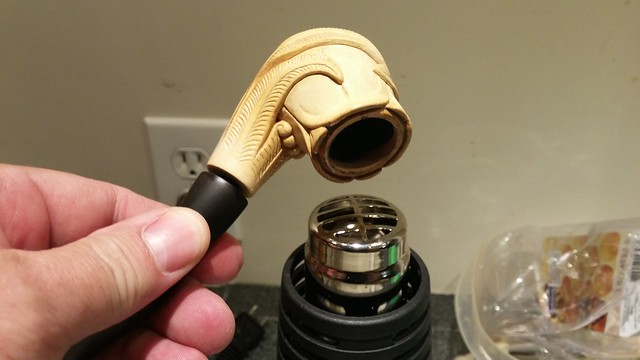 Once warm, I painted the melted wax onto the stummel with a cotton swab, working the wax evenly over the carved surface. When the entire stummel was covered, I set the pipe down on a clean towel to cool. 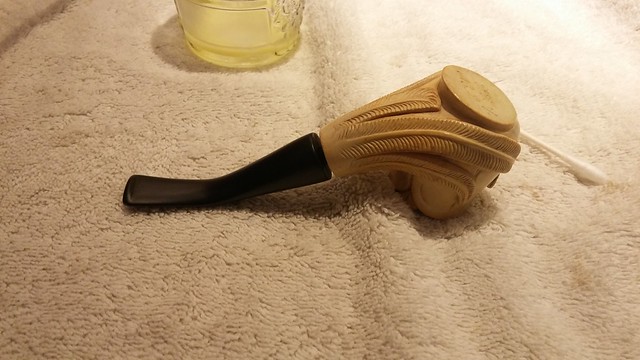 I finished the stummel by hand buffing the meerschaum with first a soft towel and then a microfibre cloth. This removed any excess wax left on the surface of the pipe and brought up a nice shine. 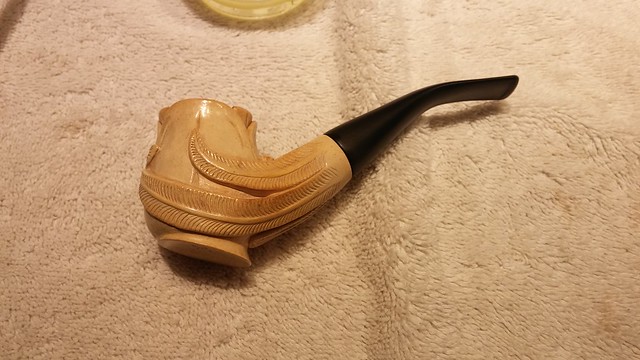 I buffed the stem on the wheel with some White Diamond compound and then applied several layers of Carnauba wax to shine and protect the vulcanite. I reassembled the pipe and began taking final photos, when I noticed something was amiss. 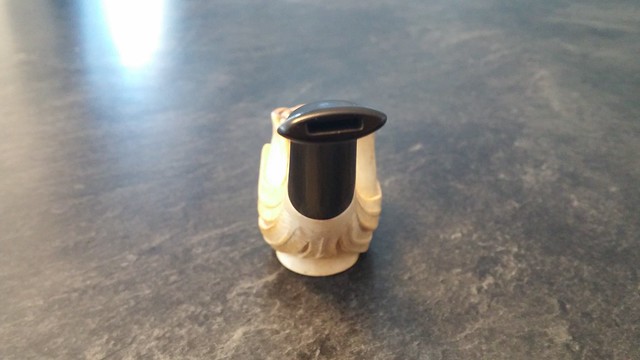 The bit end of the stem was twisted slightly counterclockwise, which of course would make the pipe sit crooked in the mouth. I’ve seen this happen with pipes with threaded fitments a la Kaywoodie, but not with a push tenon. I’m not sure how the stem got twisted, but it was an easy fix. With a pipe cleaner inserted in the stem to keep the airway open, I heated the bit over the heat gun until pliable, then gently straightened the stem. I held it in the desired position until the rubber cooled enough to maintain the new shape. 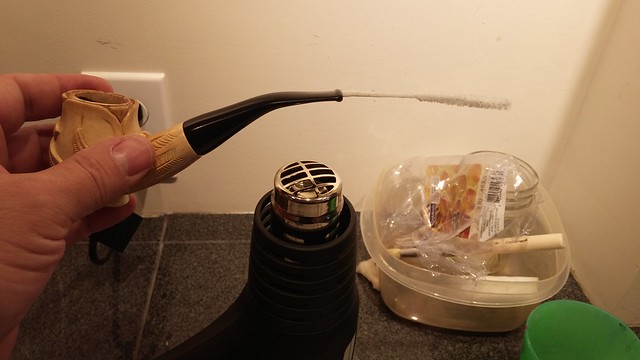 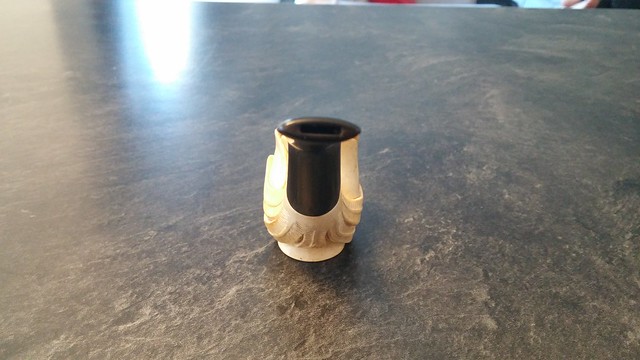 This meerschaum sitter is now ready to find a new home next to an appreciative piper. Here’s the finished pipe. Thanks for looking, and until next time, Happy Piping! 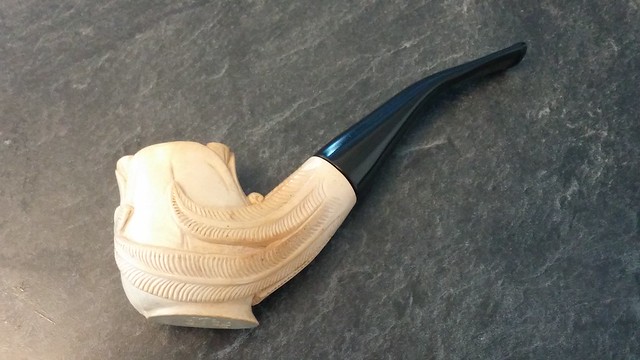 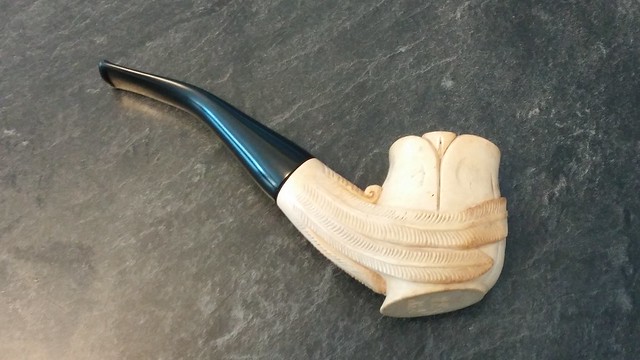 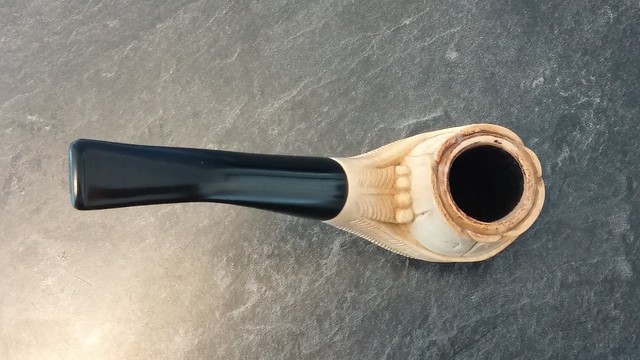 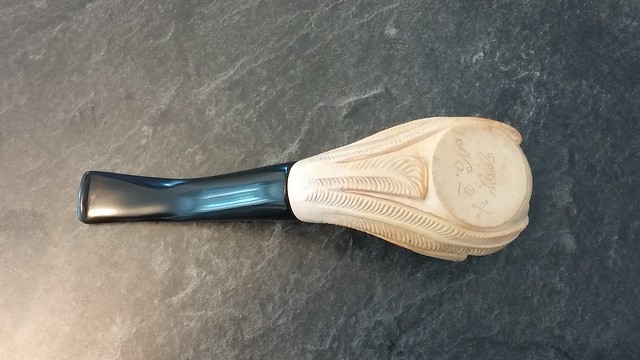 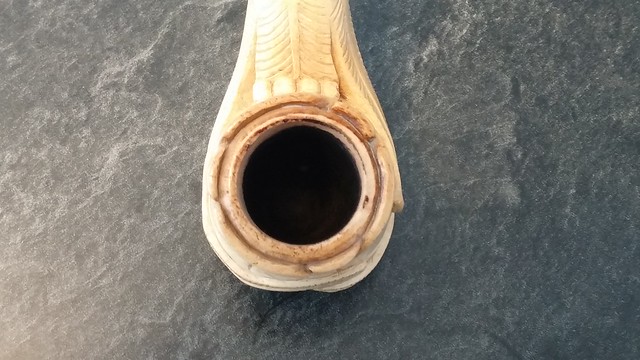 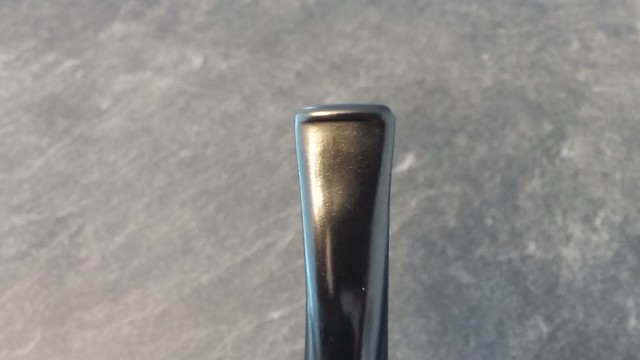 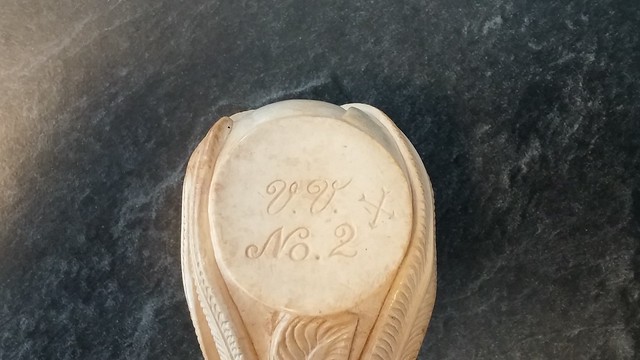 4 thoughts on “Quick Cleanup of a Tulip Meerschaum Sitter”