Several months back I picked up an odd lot of “pipe tobacciana” from an erstwhile local collector. It contained a half dozen or so basket pipes, a Decatur pipe rack and two old pipe tobacco tins – a ubiquitous Prince Albert pocket tin, and a 7 oz sized tub of Middleton’s Cherry Blend.

The Prince Albert tin was empty, but the Middleton’s tin turned out to be about three-quarters full. The seal had been broken and the tobacco inside had dried to a very crisp texture, although it certainly passed visual inspection – in fact, it looked almost fresh. The cherry aroma had dwindled down to a dry, raisin-and-dry-grass scent, but there was no hint of mold in the nose. 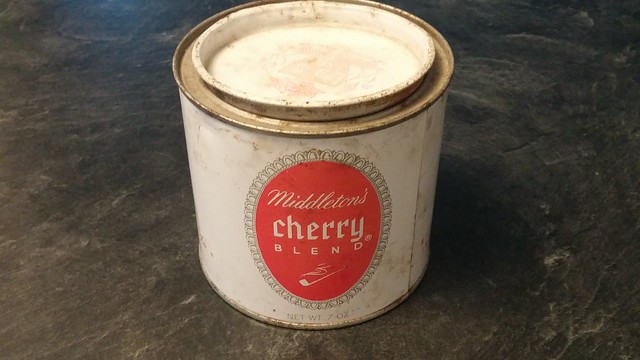 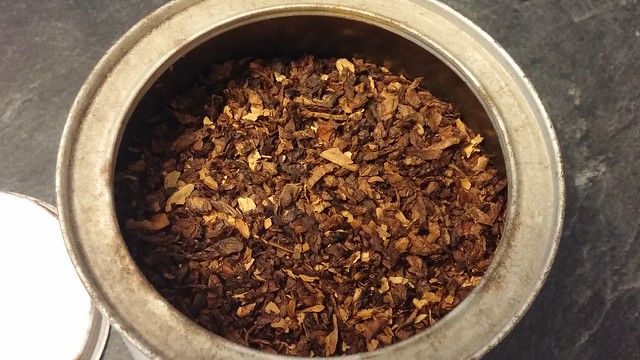 The tin is labelled with the John Middleton Co address in King of Prussia, Pennsylvania, a location the company took over in 1960. Theoretically, this tin could be pushing 60 years old. I have no idea when the 7 oz tin went out of production, but there is one clue on the jar – there’s no SKU/bar code on this tin. I learned from a fellow member of the Brothers of Briar forum that SKUs were adopted in the early to mid 1970s, between 1973 and 1975. That puts this tub of tobacco into the 1960 – 1975 age bracket.

I thought this situation might provide an opportunity for a bit of more or less risk-free experimentation with re-hydrating (very) dry pipe tobacco. If my attempt was successful, I’d have some vintage baccy to try; if not, no harm done as I had paid for the tin, not the contents. Also, judging by the number of questions posted on pipe fora across the Internet, the dilemma of dry tobacco faces almost all pipe smokers at some time in their career.

A quick Google search rendered numerous possible approaches to getting moisture back into the tobacco, ranging from orange peels and apple slices to spray bottles, steam irons and bread slices. I elected to employ a basic, middle of the road, approach that seems least likely to introduce any potential contaminants into the tobacco (think fruit juice, yeast, molds).

I spread the dry tobacco across the bottom of a shallow glass baking dish and covered the dish with a clean, damp dishcloth. I was careful to wring out the cloth well and arrange it so that it couldn’t slip and touch the tobacco, then left everything to sit. 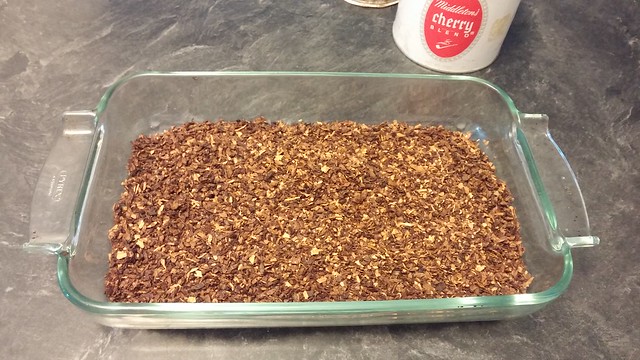 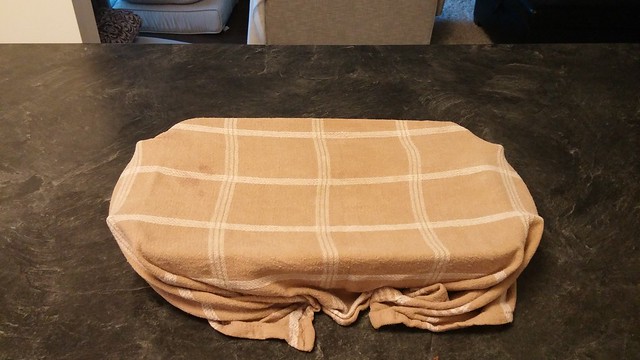 The theory behind this approach is that the dry tobacco is hygroscopic – that is, it has the ability to attract and hold water molecules from the surrounding environment. In short, the dry tobacco can pull the moisture out of the towel and absorb it, thus (hopefully) regaining its resilient texture and smoke-ability.

I checked the tobacco after an hour of sitting under the towel, and was cautiously optimistic. Although still very dry, the top layer of tobacco had developed a small amount of spring-back when pinched, and the aroma was less “dried raisin” and more “cherry preserves”. Here’s a shot of the pan – it may be hard to see in the photos, but the tobacco is now darker than in the first shot above. 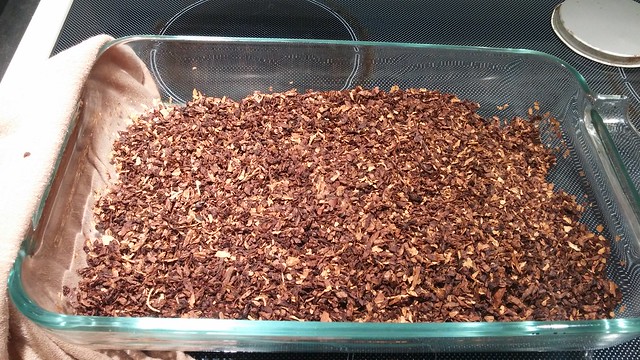 Encouraged, I stirred the tobacco gently to expose more dry leaves and again covered the dish with the towel. Another hour passed and I repeated the Sniff and Stir. It was taking its sweet time, but the tobacco was definitely reacting to the injection of moisture. Things were looking good, so I decided I could leave the experiment untended for the rest of the night. To make sure the moisture in the towel went into the tobacco instead of  evaporating into the air, I slipped my ersatz humidor into a clean kitchen garbage bag and clipped the opening closed. I set the tray where it wouldn’t be in the way during the morning rush and went off to bed. 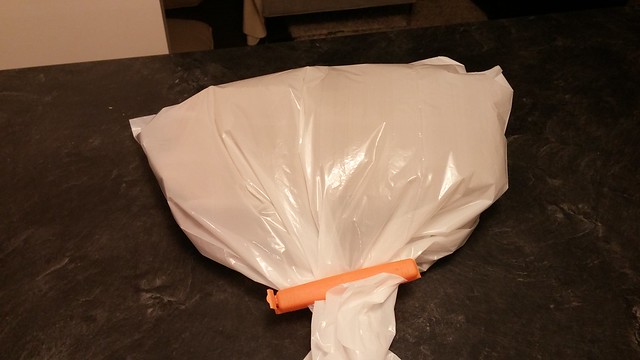 The next morning, I awoke excited to see how the tobacco had progressed overnight. As I peeled back the layers surrounding the baking dish, I could tell that it was nearly time to jar up this blend. The entire surface of the tobacco had turned a rich, deep colour shot through with the sparkle of the lighter Virginias. And once again the aroma had changed; there was a distinct, though still subtle and no doubt faded, note of Bing cherries overlaid on the fresh hay of Virginias and the deeper, earthy tone of the Burley tobacco upon which this blend is based. 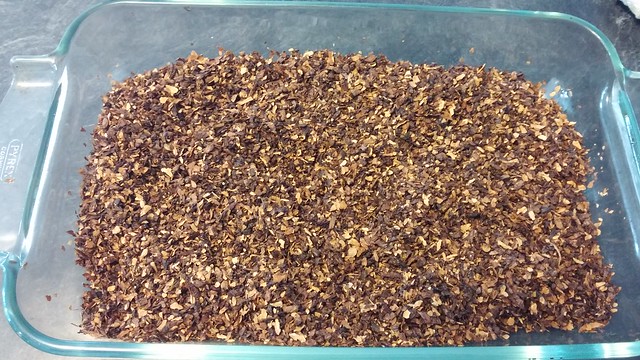 I gave the baccy a quick stir to drag up the drier bottom layer, and then put the towel back down (still moist twelve hours later!) while I prepped a large Mason jar for storage. I usually don’t fuss around with my jars when storing tobacco, but I still had mold on the mind and wanted to make sure I wasn’t jarring up any micro-critters with the tobacco. I also hadn’t used such a large Mason jar in a few years, so it was due a good cleaning anyway.

I washed the jar inside and out and then popped it into a 180F oven for 15 minutes. That’s enough heat and time to sterilize but not so much that the hot glass would scorch the tobacco. In went the newly revitalized tobacco, on went a new seal and snap ring, and the jar was left on the counter to cool. 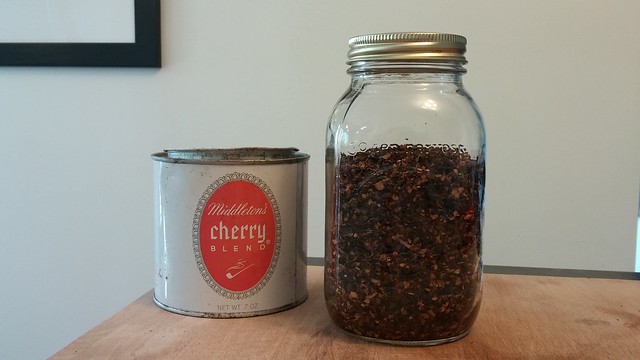 I left the jar alone for a few days to let the moisture level reach equilibrium. I popped the lid on the jar this morning and packed some of the rehydrated tobacco into the bowl of a no-name meerschaum-lined bent billiard I like to use for tasting new blends.

The tobacco behaved well, burning slowly and fairly steadily throughout the bowl. I needed a few relights but nothing out of the ordinary, and I was generally pleased with its performance. Flavour-wise, I found a lot of the typical nuts and hay taste of burley/virginia blends, without a hint of sour or otherwise “off” flavours.  The smoke was definitely on the mellow and milder end of the pipe spectrum, and, if I’m being honest, a bit boring.

The rehydration process had brought the tobacco itself back to life but did nothing to reanimate the cherry flavour. The casings/toppings were almost completely absent except for a tiny bit of fruitiness at the beginning of the bowl, but they didn’t last long. I can’t say I’m surprised by this, as the flavourings used in aromatic blends are rather volatile. Unless the tobacco is firmly sealed for the long haul, those flavours will fade.

For all intents and purposes, I have reclaimed about 6 ounces of basic OTC-quality “Burley & Bright” blend. Not, perhaps, the most exciting outcome, but I’m declaring my rehydration experiment a success; I would not hesitate to try again if I find myself dealing with another long-forgotten tin.

I’m curious to see how the tobacco responds to a little time in the jar. Perhaps the natural flavours will develop a bit more, or perhaps I’ll end up using the tobacco as a solid base for a bit of custom blending down the road. I’ve got a few ounces of my local B&M’s cherry blend here somewhere (a wispy, rather delicate cut, too much Virginia and far too much cherry topping) that might benefit from being cut with this Burley blend.

I hope you found something in this story that you can apply to your own “cellar management”. Thanks for reading, and until next time, Happy Piping! 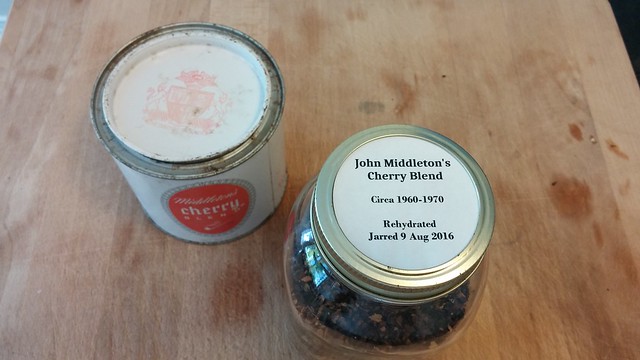