Before anyone says it, no, there’s really no such thing as a “typical” estate pipe cleanup; just like home renovations, you never really know what you’re getting into until you open up a wall. That said, I think this particular refurbishment is fairly representative of the type of work required to take a reasonably well-treated, new-to-you estate pipe from dust collector to front porch companion.

I picked up this late 1960’s/early 1970s Brigham 3-Dot bent brandy at a recent sale. I wanted it for a few reasons: I didn’t have the 84 shape in my collection and the pipe felt great in my hand. I also kind of enjoyed the “sideburns” of smooth briar on an otherwise rusticated bowl. I’d guess that these were the precursors to the wider “shark tooth” details that appear on so many Brighams from the late 1970s and early 1980s.  I decided to pull the trigger on the purchase and brought the pipe home to my work table.

This brandy shaped pipe is stamped “384” and “Brigham” over “Made in Canada” on the underside of the shank. The stem is inlaid with the three brass pins of the Brigham 300-series pipes. The pipe was in overall good shape, despite needing a good cleaning. A small amount of rather loose cake covered the inside of the bowl, and the exterior of the stummel was dirty and a bit greasy feeling. There was a bit of lava on the rim, but otherwise the briar was in good tick. The stem was, unfortunately, heavily oxidized, nearly obscuring the brass pins (the famous Brigham Dots). I knew from experience the oxidation would be a chore to remove – these old Brigham stems really seem to hold onto it for dear life sometimes. A few small tooth dents were hiding under the yellow/green oxidation at the bit, but the pipe was free from some of the more traumatic scratches, dents and cracks often found on estate pieces that have led a rougher life. Despite being put away with an old filter in place, the aluminum tenon/filter holder wasn’t corroded at all. Evidently this pipe was stored somewhere dry at least. 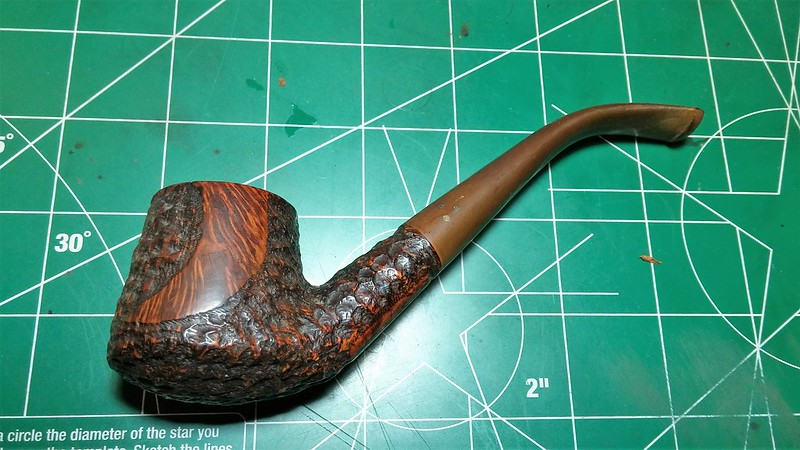 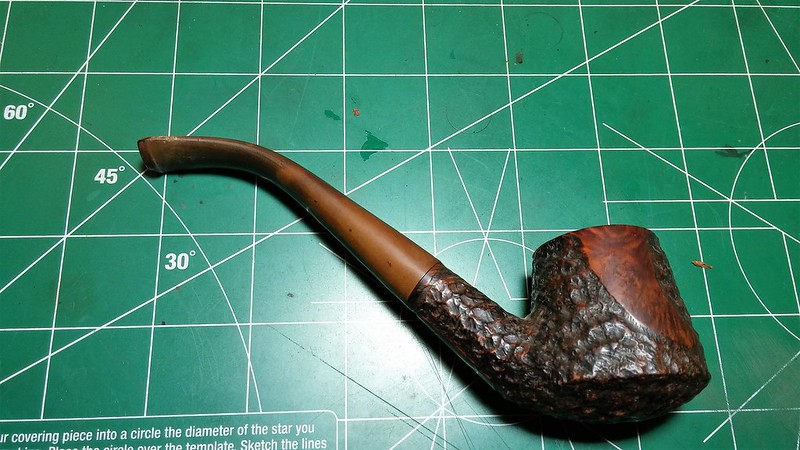 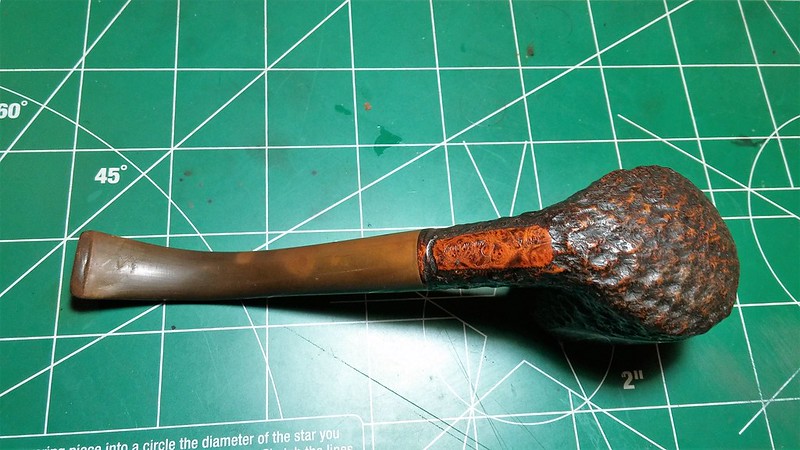 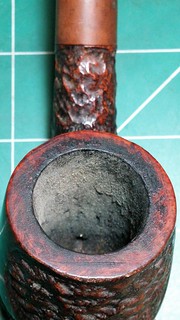 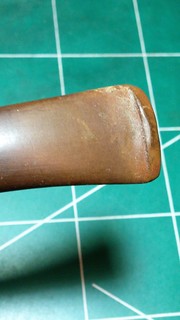 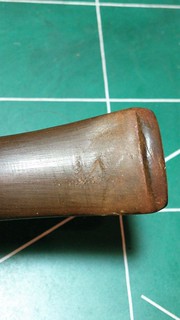 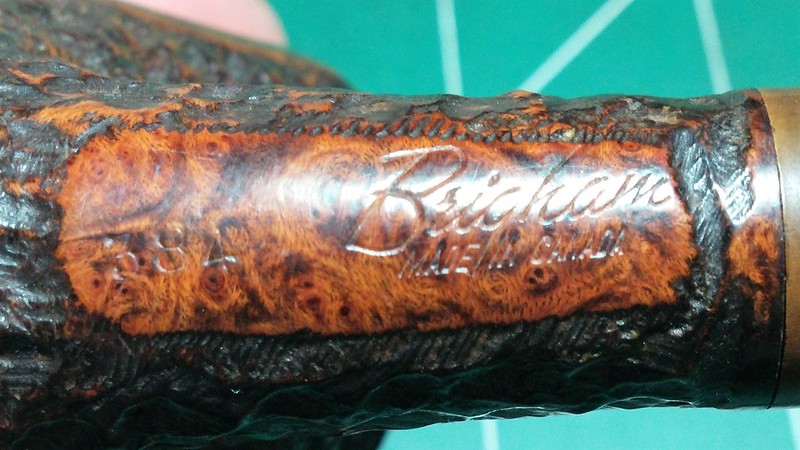 I worked through the heads of my Castleford reamer to cut the old cake out of the bowl. It made short work of the light carbon build-up and I was relieved to see that the bowl was in great shape, with no cracks or burnouts. There is a little bit of a groove rubbed into the floor of the tobacco chamber from enthusiastic pipe cleaners, but it’s not worn enough to warrant building the floor up with pipe mud at this point. 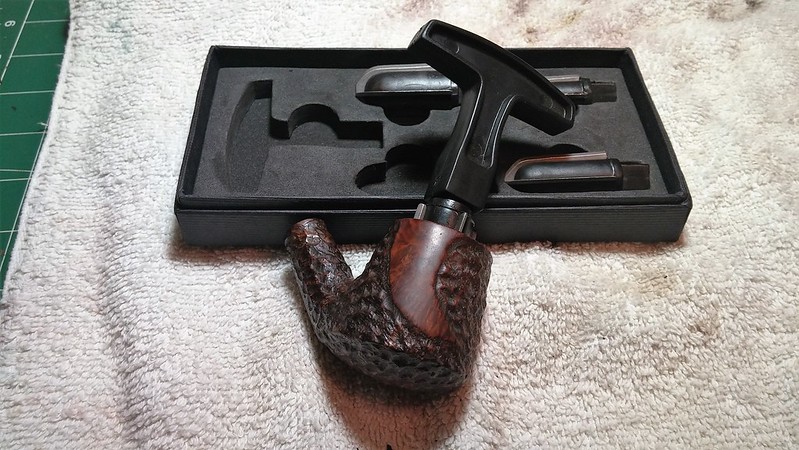 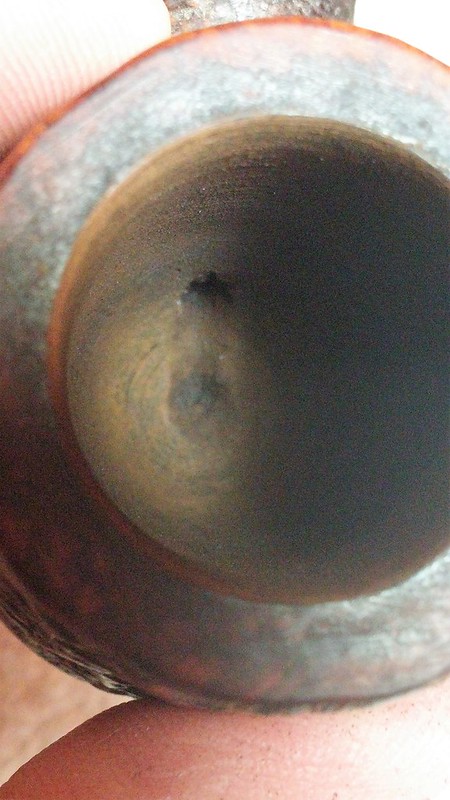 I changed up my cleaning routine while working on this pipe. Instead of sending the stem right away for its much-needed Oxyclean soak, I decided to use the retort to clean out the internals first. As I had anticipated, the pipe was pretty clean inside. I ran two test tubes of isopropyl alcohol through the retort and followed up with a grand total of three pipe cleaners in the shank and bowl. 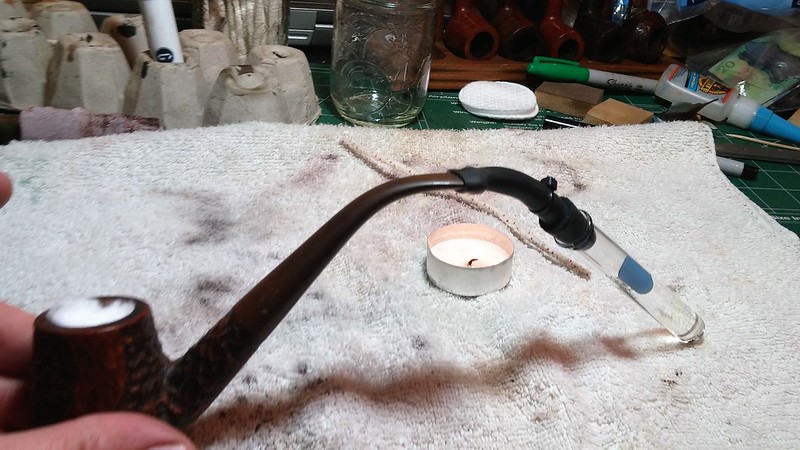 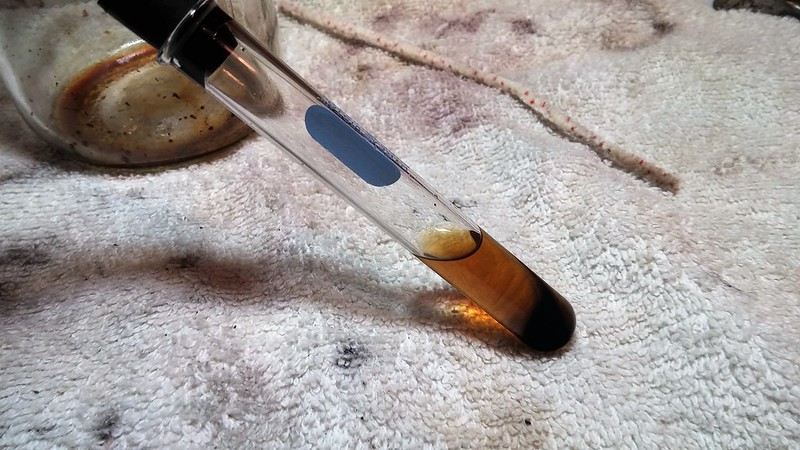 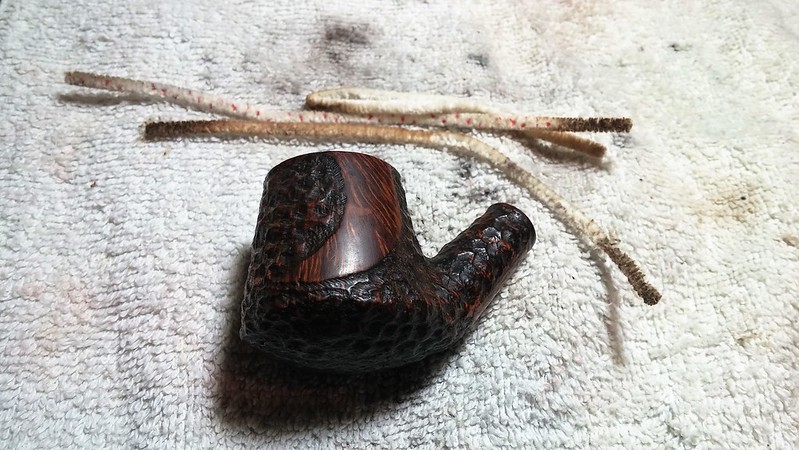 With the insides clean, it was finally time to address the outside. I mixed up a stronger-than-usual Oxyclean solution of a scoop and a half of powder to about a cup of warm water and dropped the stem in for a good long overnight soak. 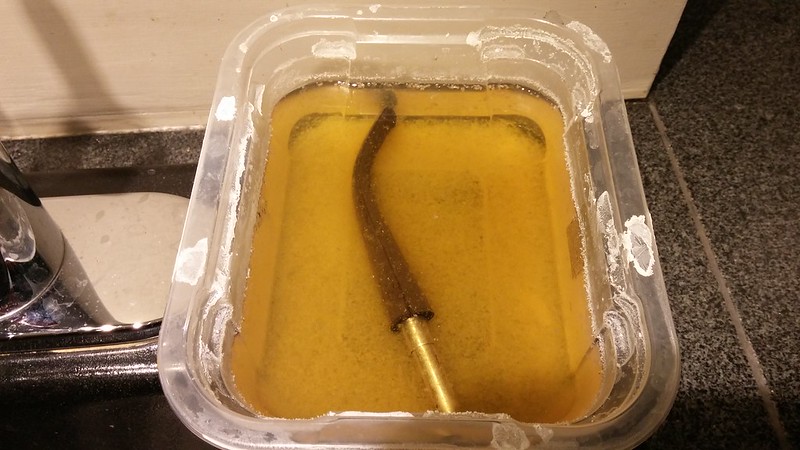 Meanwhile, I cleaned the exterior of the stummel with Murphy’s Oil Soap and a toothbrush, scrubbing to lift the dirt, oil and wax from the briar. The Murphy’s scrub also removed the light rim tars. 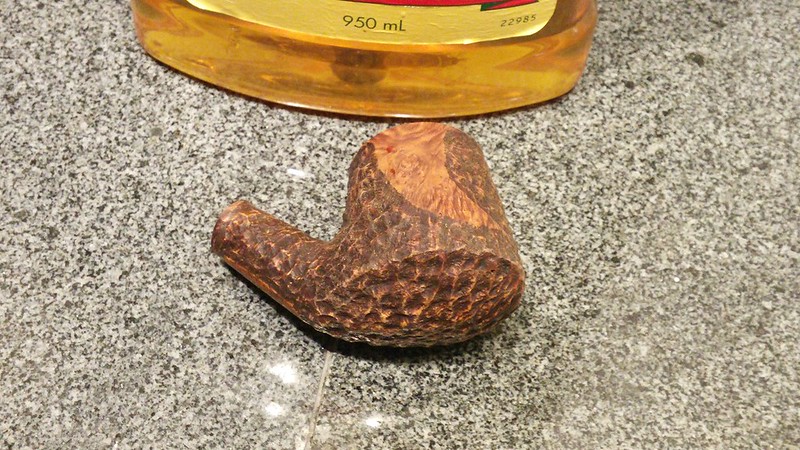 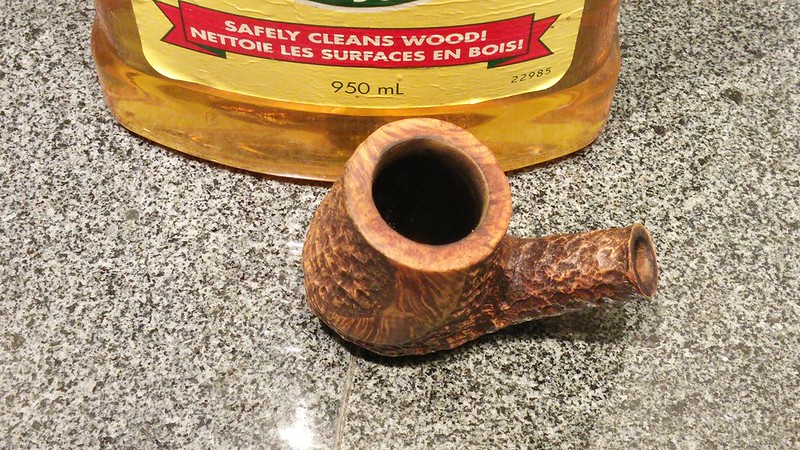 The next morning I pulled the stem from its bath and scrubbed at the oxidation with 0000 steel wool followed by Magic Eraser and 600-grit wet sandpaper. As expected, I had to put in my share of sweat equity before the stem started to look like vulcanite again. I dried the stem inside and out and reassembled the pipe for the next pictures. The camera reveals all – there’s still some work to do at each end of this stem to get the last of the oxidation out of the rubber. 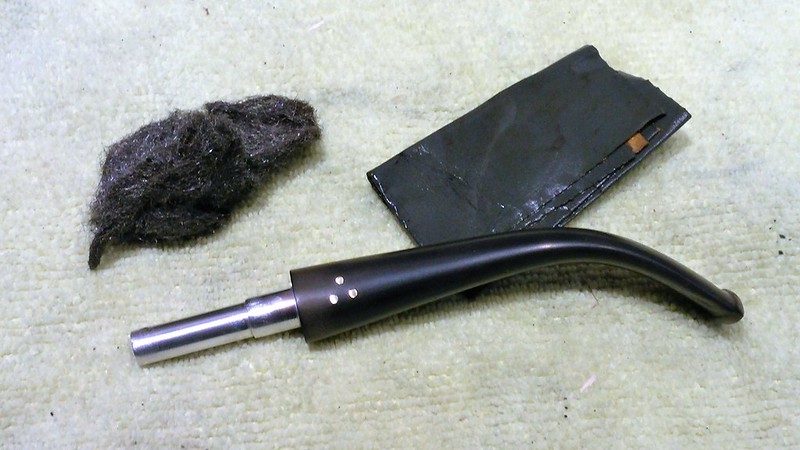 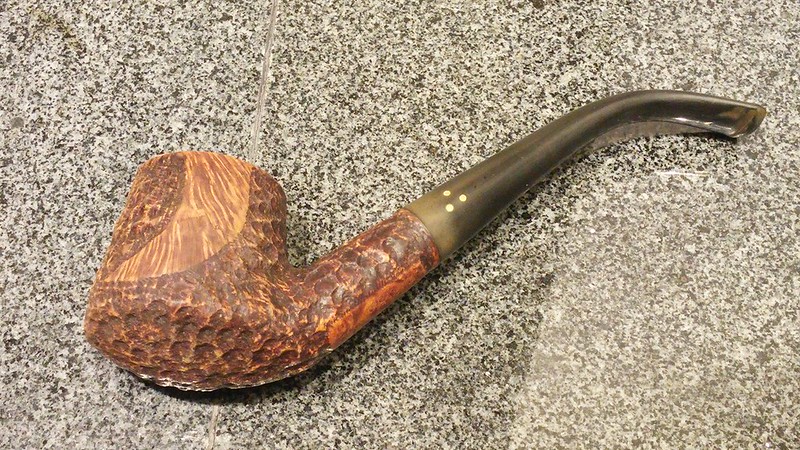 I went back over the stem, this time with 220-grit sandpaper followed by medium and fine sanding sponges. This removed the last of the stubborn oxidation and prepped the tooth dents for filling, I dropped CA glue mixed with charcoal powder into the dents and set the stem aside to let the glue cure. 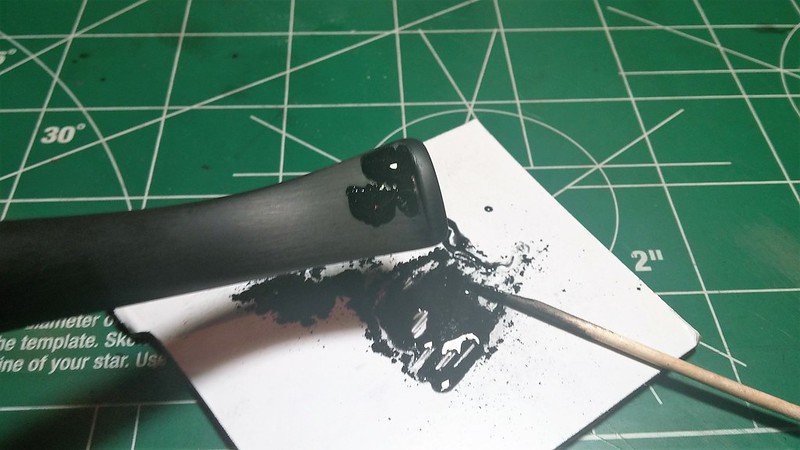 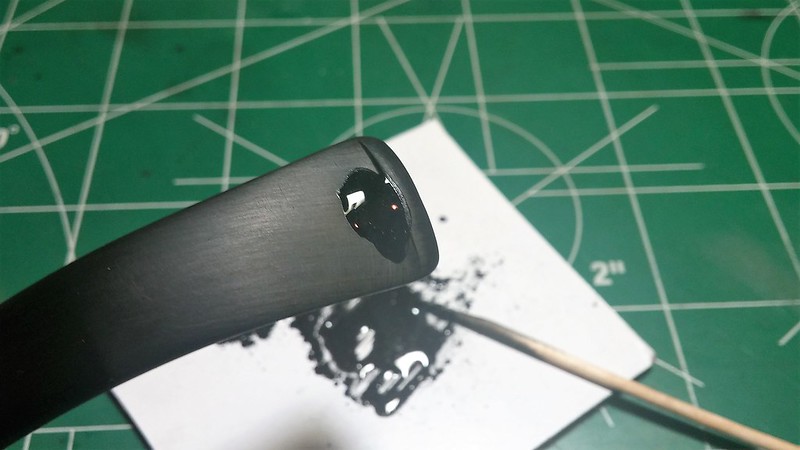 When the fills were hard, I levelled them off with the surrounding vulcanite using files and sandpapers. 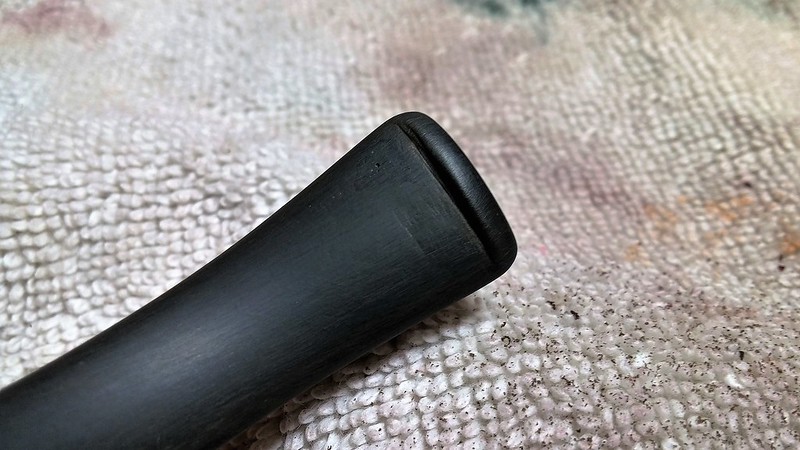 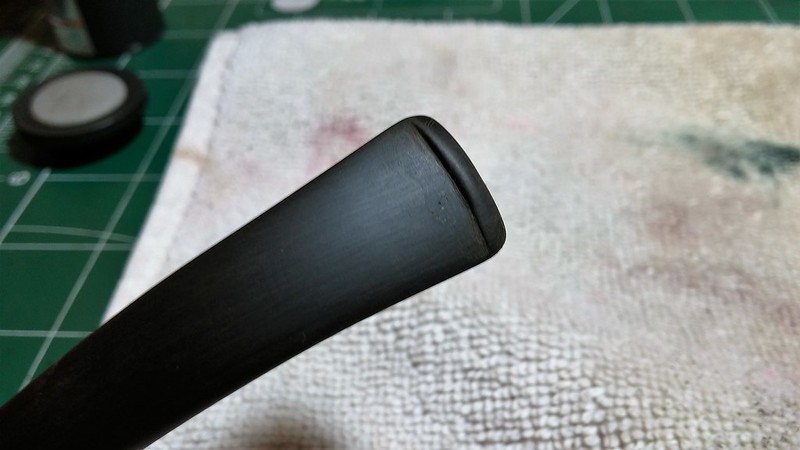 I wiped a bit of mineral oil onto the stummel to rehydrate the wood after its cleaning. The oil significantly alters the appearance of the briar, bringing out the red tones in the wood and deepening the darker stained areas. There was an area on the face of the bowl that was a bit worn from handling, so I touched things up with a dark stain pen while I was at it. 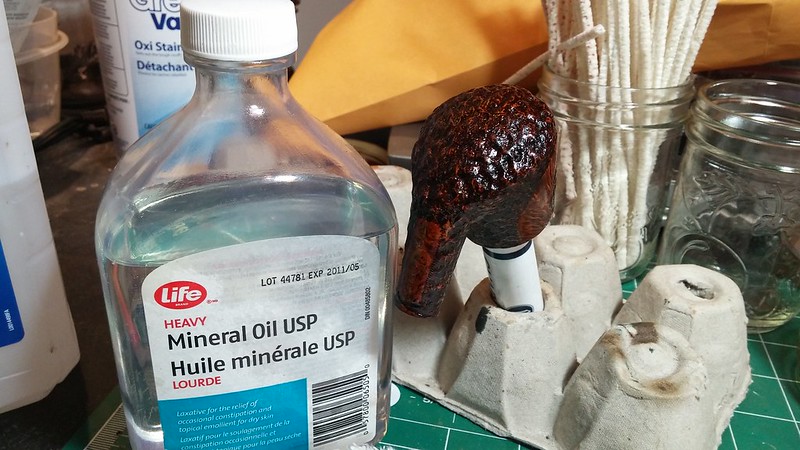 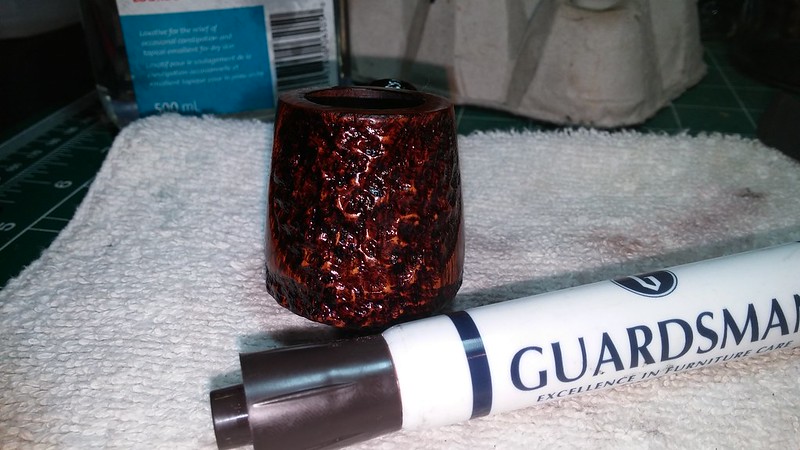 I finished off the work on this pipe with a run of White Diamond compound on the buffing wheel and a few coats of Carnauba wax to shine and protect. The pipe is as good as new and I didn’t have to deal with any unexpected or hidden damages. Even the sideburns glow with the lustre of fresh Brylcreem. Elvis would, I think, approve. (“Thank you. Thank you very much.”) 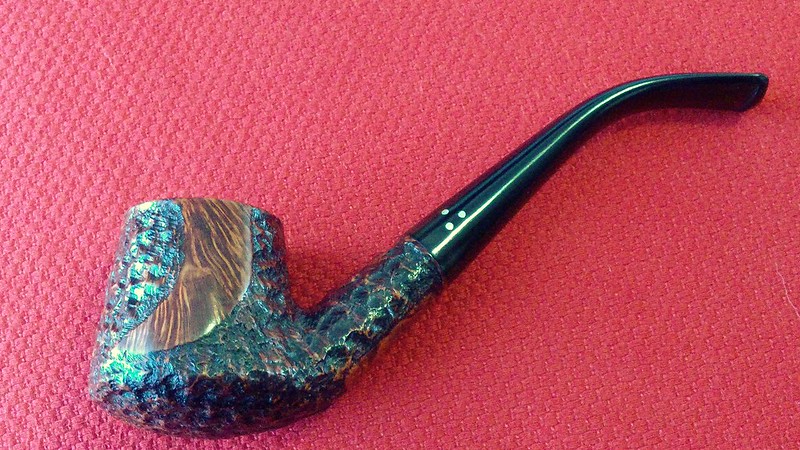 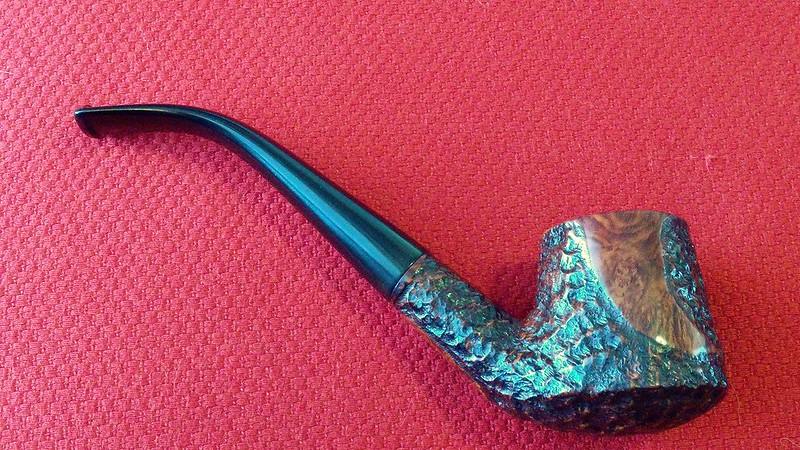 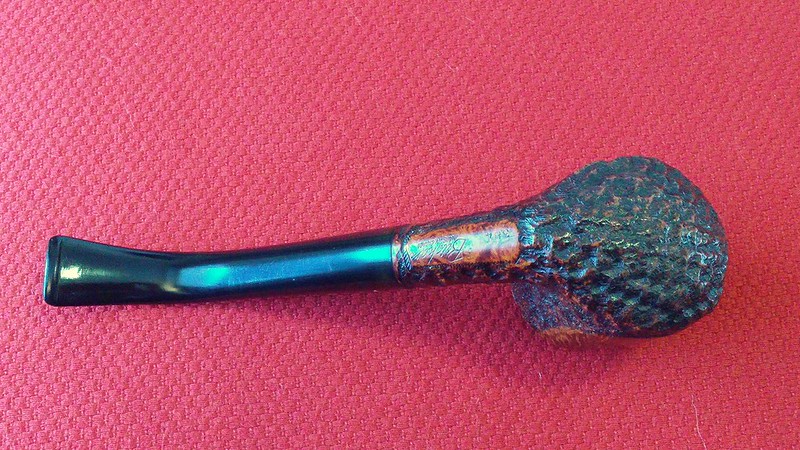 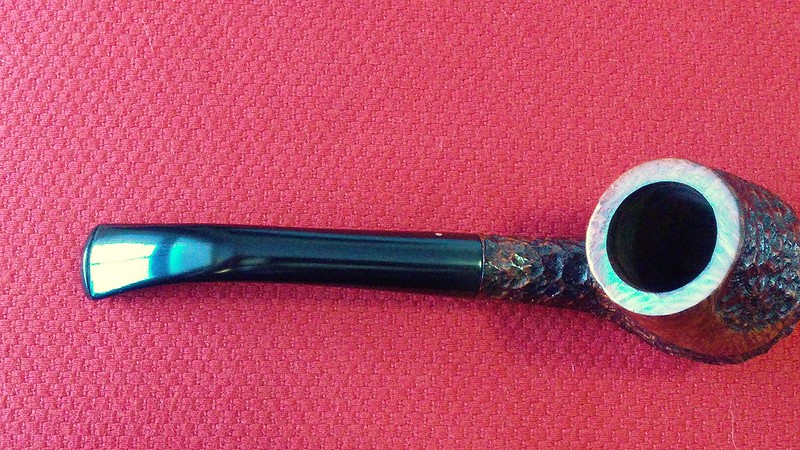 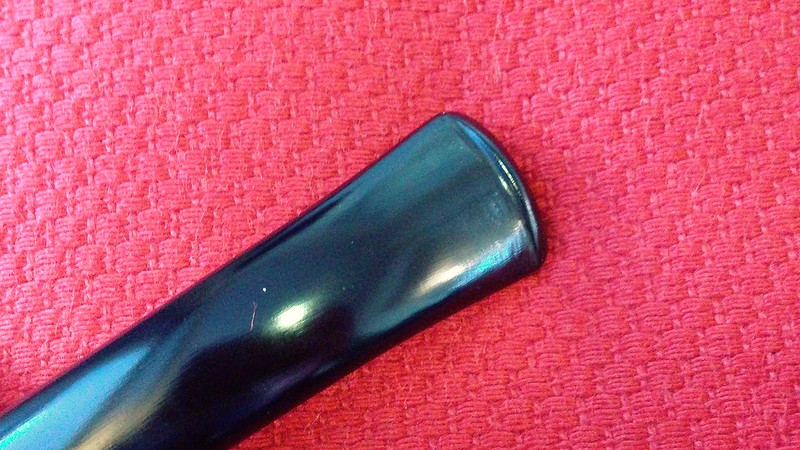 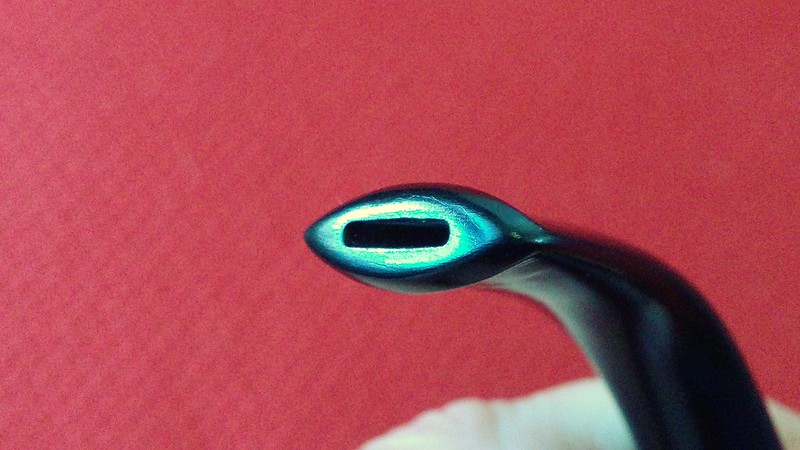