I bought these two bulldog pipes separately, but as the restorations proceeded almost identically, I thought I’d write them up together. Both pipes are from the late 1970’s or early 1980’s – the unique rusticated stummels with wave-shaped smooth features are illustrated in this Brigham catalog from 1978. I’m working here on a 316 Straight Bulldog and a 426 Bent Bulldog. 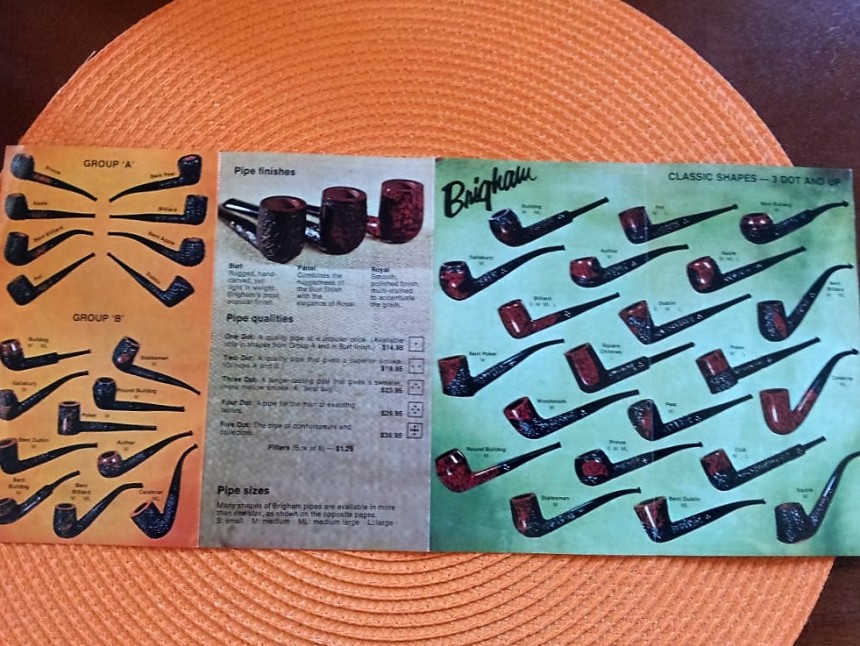 The bent pipe is stamped “Brigham” over “Made in Canada” along with “426”, denoting a Shape # 26 on a 400-series pipe. The straight bulldog is likewise stamped “Brigham” and “316” (shape # 16, 300-series). Curiously, this pipe is missing its Canada stamp, though the aluminum tenon clearly identifies it as having been made in Toronto.

Both pipes came to me in good to very good condition with no big dents or gouges in the briar and no fills in need of repair. In fact, I couldn’t find any fills on either pipe, though there may be one or two hiding in the rusticated areas. The bowls showed gentle use, with a light cake and a bit of tar on the rims. The straight 316 had a rusticated rim which was in nice condition, while the 426 was made with a smooth rim. It showed a few dings and nicks on the inner and outer edges, and was slightly out of round due to reckless reaming with a pen knife. The major issue with both pipes was heavily oxidized stems – they were discoloured a very pale yellowish green. Ick. The straight stem was otherwise in good shape with very little chatter and no heavy bites. The bent stem, by contrast, sported deep tooth dents top and bottom that had been hidden under a softie bit. 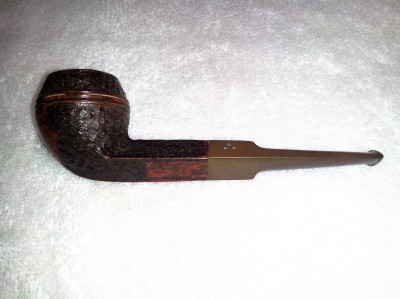 Both stems went into Oxyclean baths for a good overnight soak to raise the oxidation to the surface and dissolve calcium and other mineral deposits.

While the stems soaked, I reamed the bowls back to briar to both clear out the last guy’s tobacco and inspect for damage. Both bowls were in excellent shape, so I moved on and scrubbed the stummels with Murphy’s Oil Soap to clean the oils, wax and dirt out of the rusticated finish. 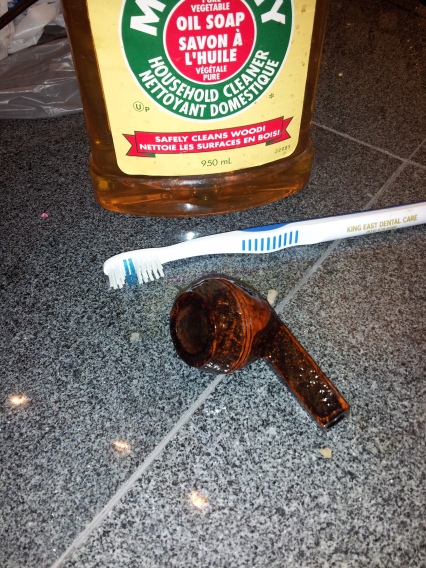 With the dirt and grime gone from the stummels, I could finally give them a good close-up inspection. The 316 Straight Bulldog passed on all counts, but I found a tiny crack across the top of the shank/bowl junction on the 426. I would deal with this once I finished the basic clean & ream on both pipes.

The rusticated rim on the straight bulldog was good to go, but the rim of the bent pipe would need a light topping to smooth out the small dents around the rim edge. 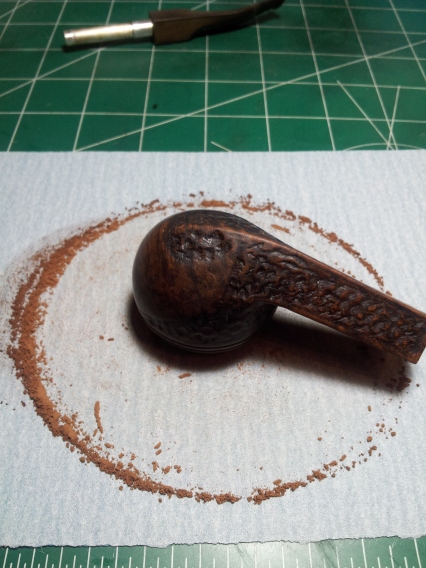 The airways of both stummels were cleaned with both bristle and soft pipe cleaners and isopropyl alcohol. They were in decent shape, and this didn’t take long.

The stems were now ready to come out of the Oxyclean, so I scrubbed them down with 0000 steel wool and Magic Eraser to remove the bulk of the oxidation. The discolouration on these stems went deep into the rubber, and proved rather difficult to remove. I spent quite a while on both stems, sanding with various grades of sandpaper, sanding sponges, steel wool and MicroMesh to bring the stems back to their original black.

The stem internals were cleaned with pipe cleaners and alcohol. The straight stem was fairly clean and was finished up quickly. It’s partner, however, had obviously been smoked regularly without the benefit of the Brigham rock maple filter in place. The tenon/filter holder was covered in tarry residue inside and out, and the airway was partially blocked with accumulated debris. It took about 25 minutes working with dental pick, pipe cleaners and lots of isopropyl alcohol to clear out the crud and get a pipe cleaner moving smoothly through the airway.

The prolonged de-oxidizing work on the stems had smoothed out the chatter and other minor marks on both stems, but the deep dents in the 426 bit would need filling. I managed to raise the dents slightly with heat, and then mixed up a batch of CA glue and charcoal powder and dropped it into the dents. When the fills had cured, it was time for more sanding to level the fills with the stem surface. I used a combination of files and sandpaper to do the rough levelling, followed by steel wool and MicroMesh pads to refine and polish the repairs and the stems in general. This series of pics shows the progression from dents to smooth stem. 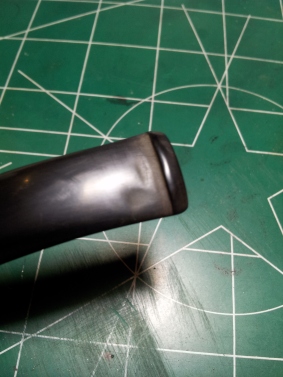 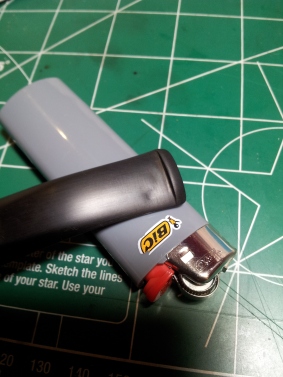 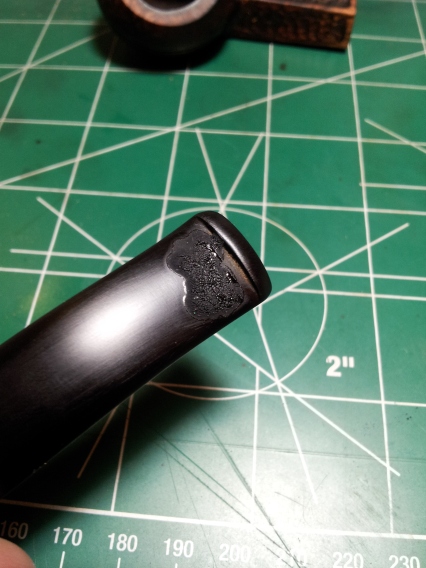 I turned my attention at this point to the crack in the shank on the 426 Bent Bulldog. It was a hairline crack and appeared quite tight – an attempt at flexing the bowl/shank junction didn’t open the crack at all. I used a sewing pin to drip a small amount of clear CA glue into the crack. When it had cured, I removed the excess glue with a fine sanding sponge.

Then it was off to the buffer where both pipes were treated to a run of White Diamond compound and several coats of Carnauba wax. The buffing really brought out the contrast between the smooth and rusticated portions of the unique Brigham finishes. Fitted with fresh rock maple filters, these Brigham ‘Dogs are ready for action once again. Here are the finished pipes. 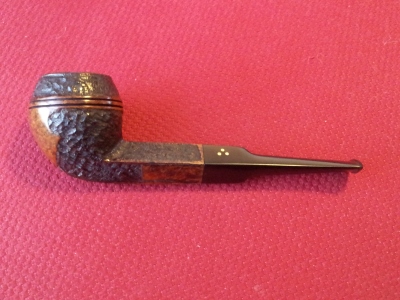 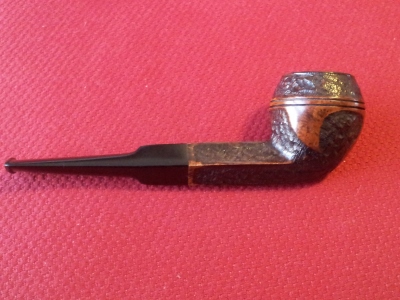 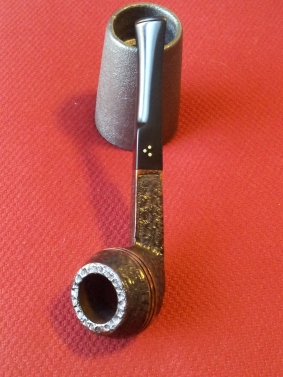 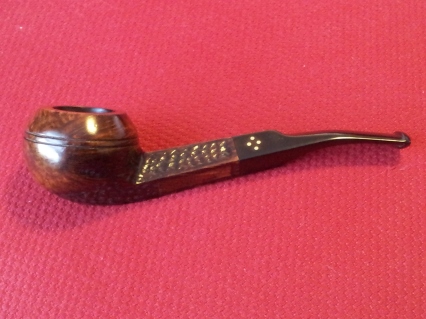 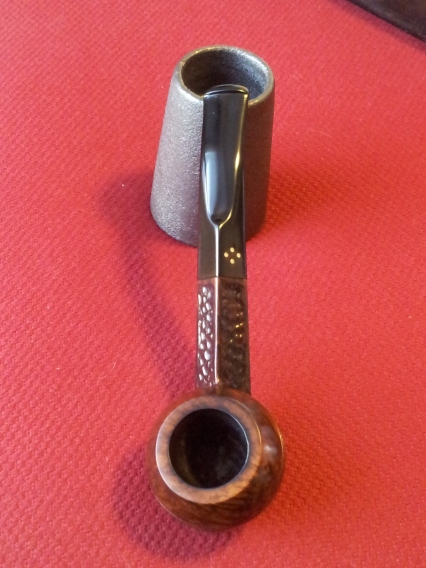 10 replies to Cleaning Up a Pair of Brigham Bulldogs