Down near the bottom of my box of estate pipes to refurb was this Yello Bole Standard Brylon octagonal billiard. I had noticed the unique shape of the bowl when the auction lot arrived, but I figured I had better do some research before playing with this pipe too much.

According to Pipedia, Brylon was invented in 1966 by the S.M. Frank & Co Ltd as a cheap alternative to briar. Brylon consists of a resin material mixed with “wood flour” (aka sawdust). It’s heavier than briar, and can reputedly heat up considerably if smoked too quickly, but is practically immune to scratches, dents and other damage common to briar pipes.

This Yello Bole Brylon pipe came out of the refurb box in relatively good shape, a testament perhaps to the impervious qualities of its synthetic makeup. The pipe was dirty on the outside, of course, and had an uneven, patchy cake in the bowl. The stem had a bit of tooth chatter in the bite area, but was otherwise in good condition. When I removed the stem, I was pleased to see the original scoop stinger still in place. It and the tenon had a thin layer of tars and oils over the surface, but should clean up easily. 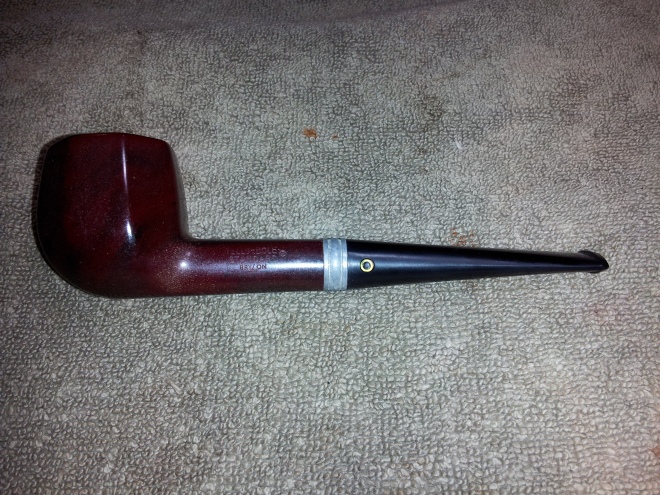 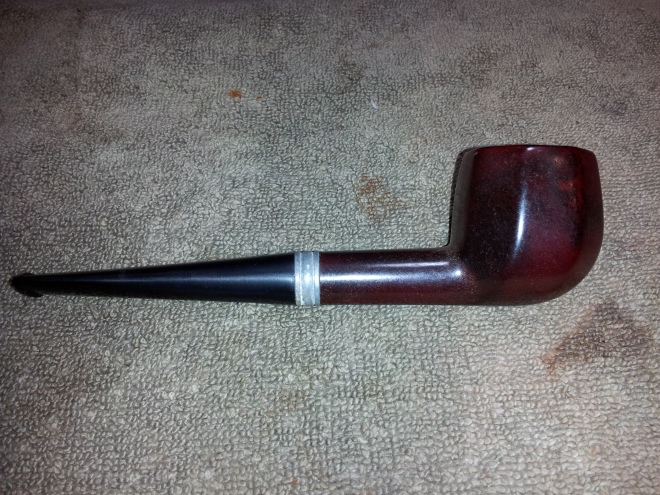 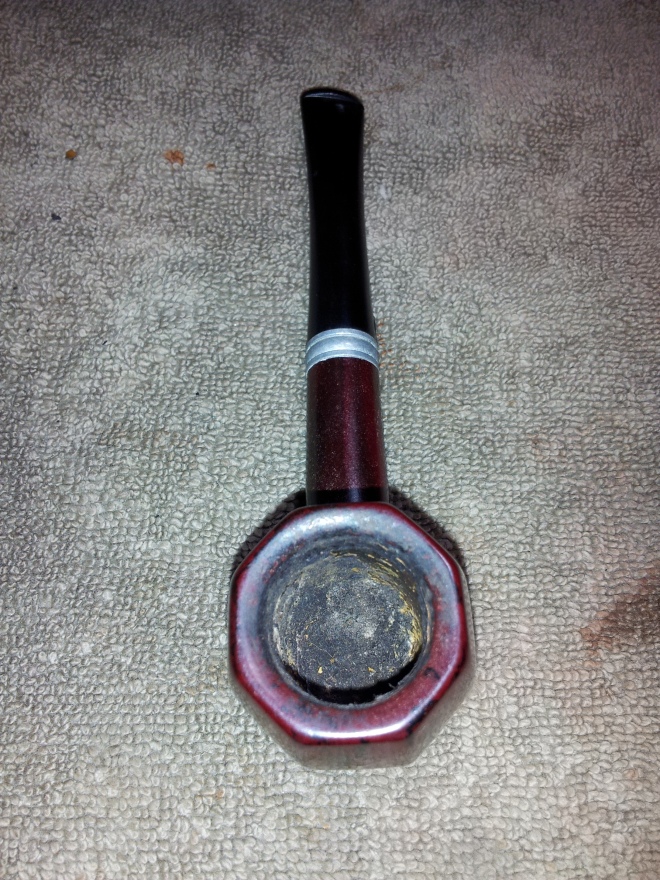 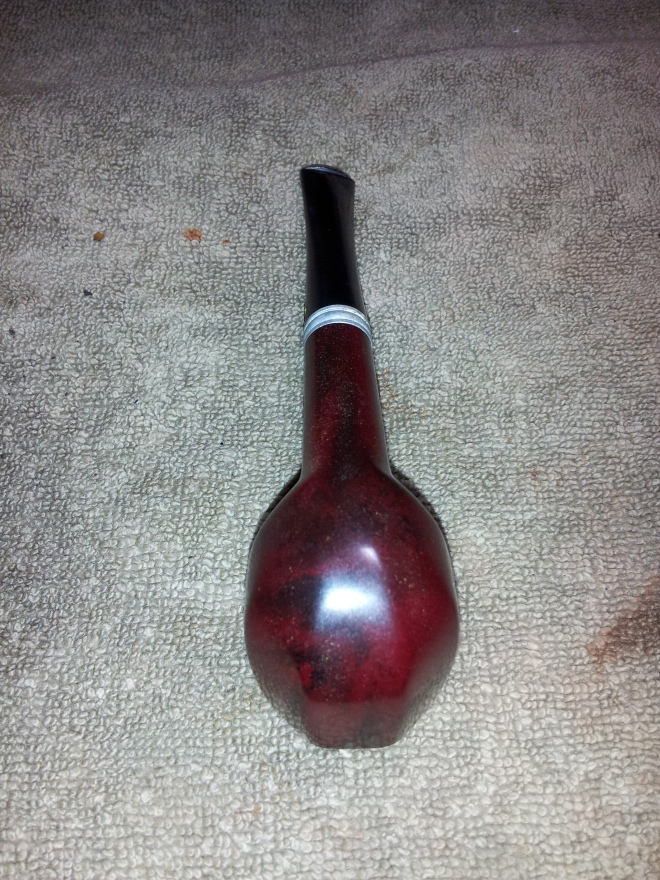 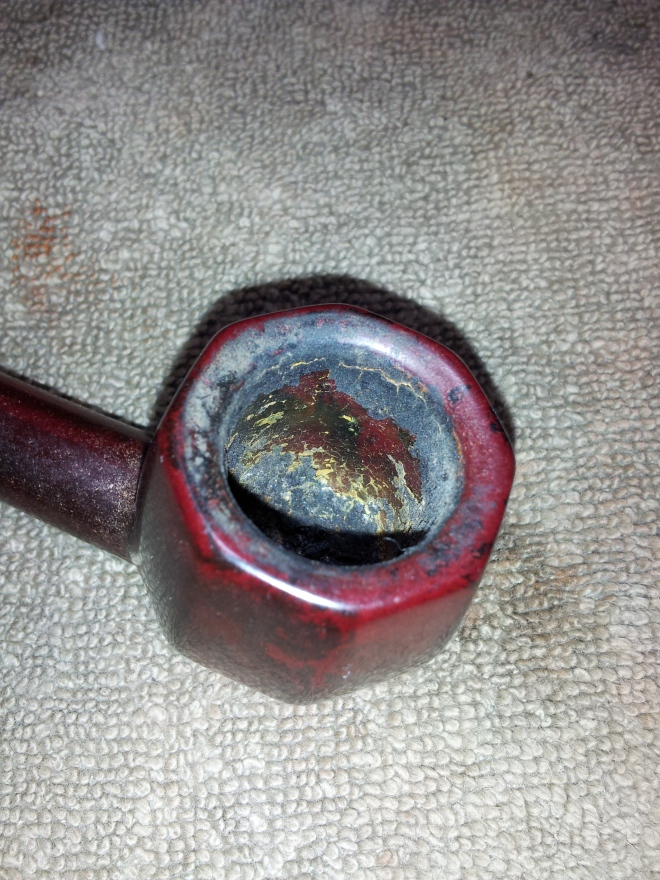 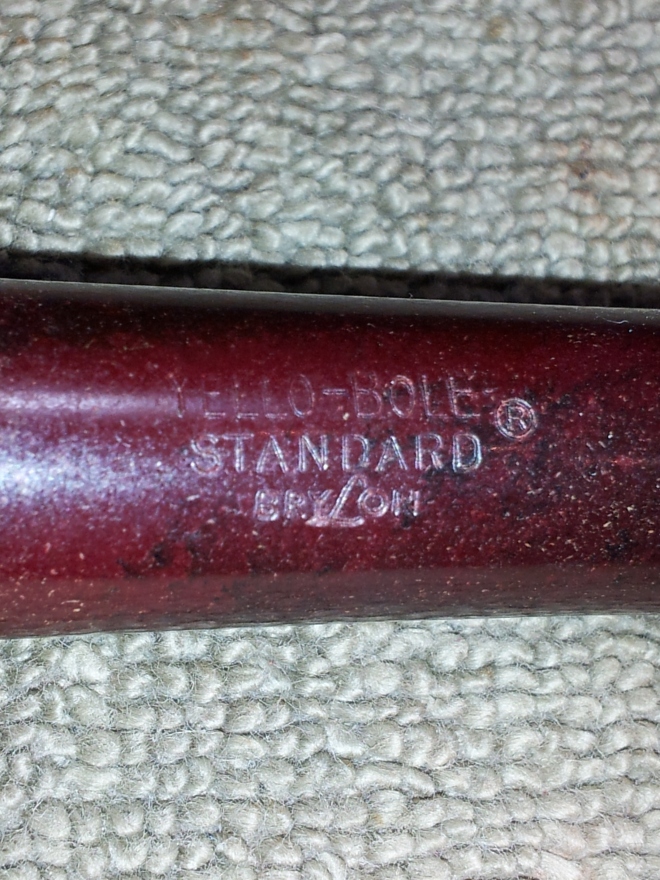 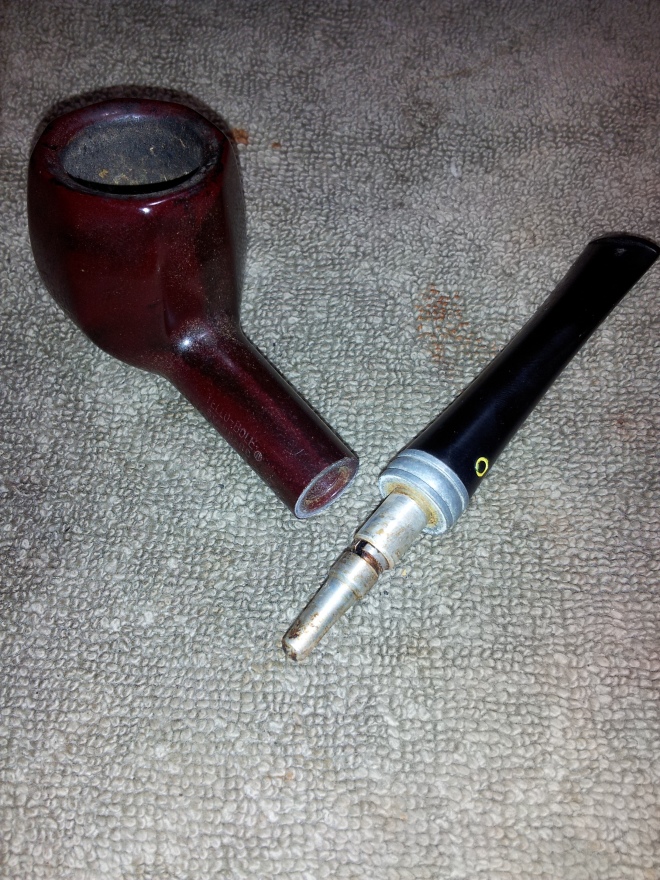 I started the cleanup by removing the patches of cake in the bowl. I used a dowel wrapped with 100-grit paper. The cake came off very easily, almost falling off the walls of the brylon bowl. With the cake out, I could see the remnants of the original Yello Bole coating lingering in a few spots. 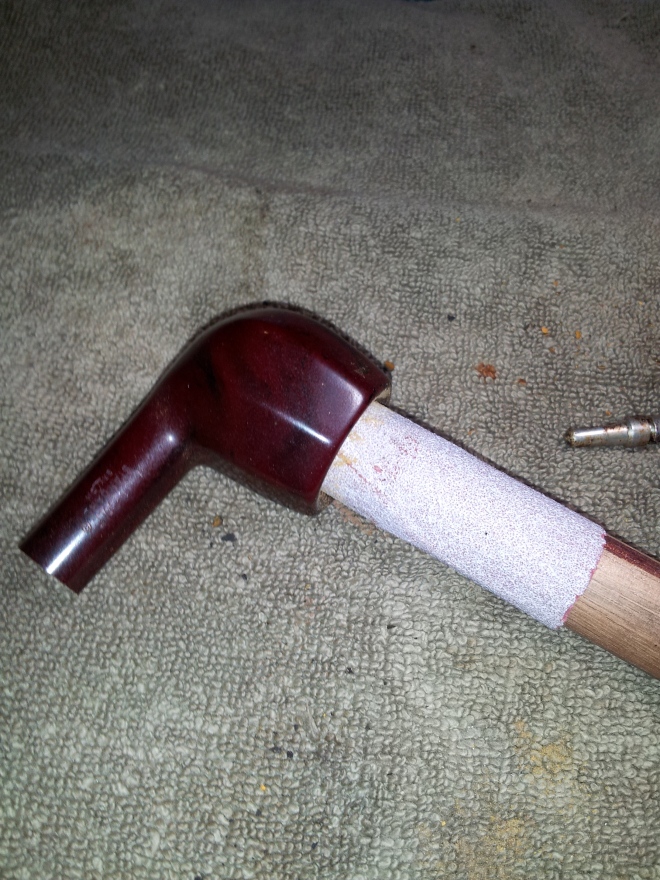 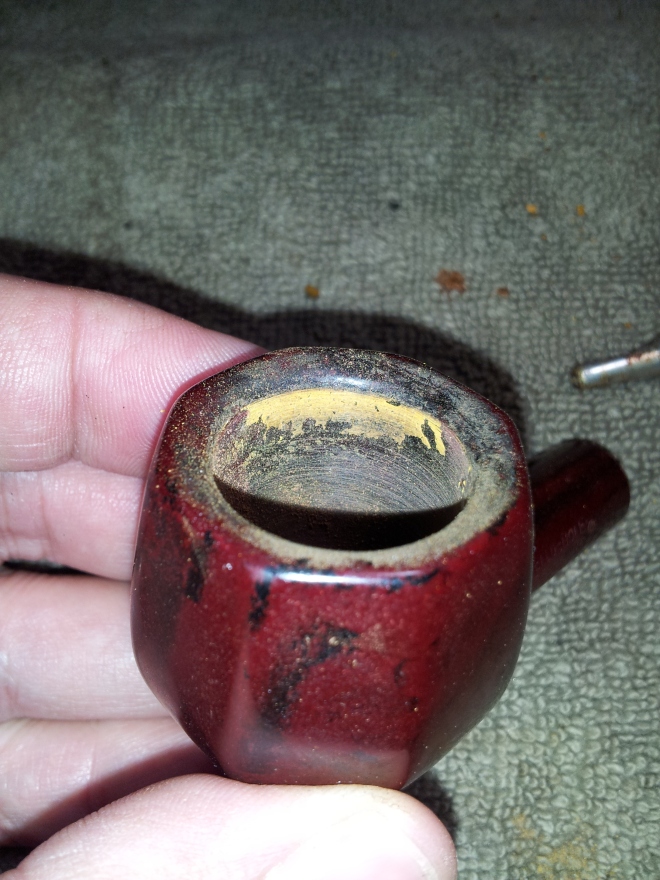 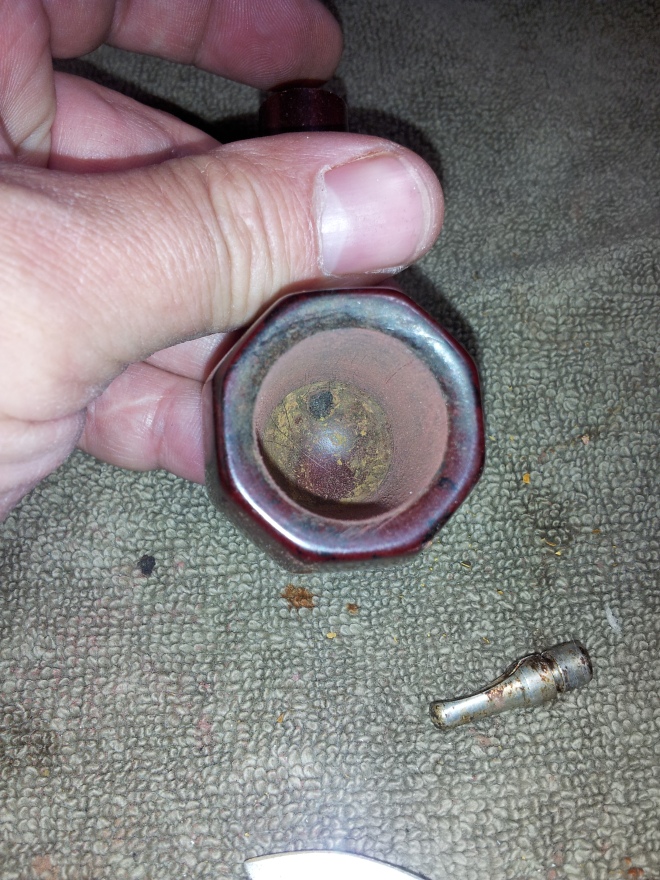 These remnants of old bowl coating popped off with just a bit of work with a pen knife. I held the blade perpendicular to the bowl walls so as not to leave scratches, but there was really no fear of this. The old yellow bits gave up their grip on the bowl very easily. A few pipe cleaners dipped in alcohol cleaned out the airway in the stummel.

I decided to spend some time on the stem at this point. I cleaned the internals with isopropyl and pipe cleaners – it wasn’t very dirty. As expected, the tenon and stinger cleaned up with a few wipes of alcohol on a cotton pad. 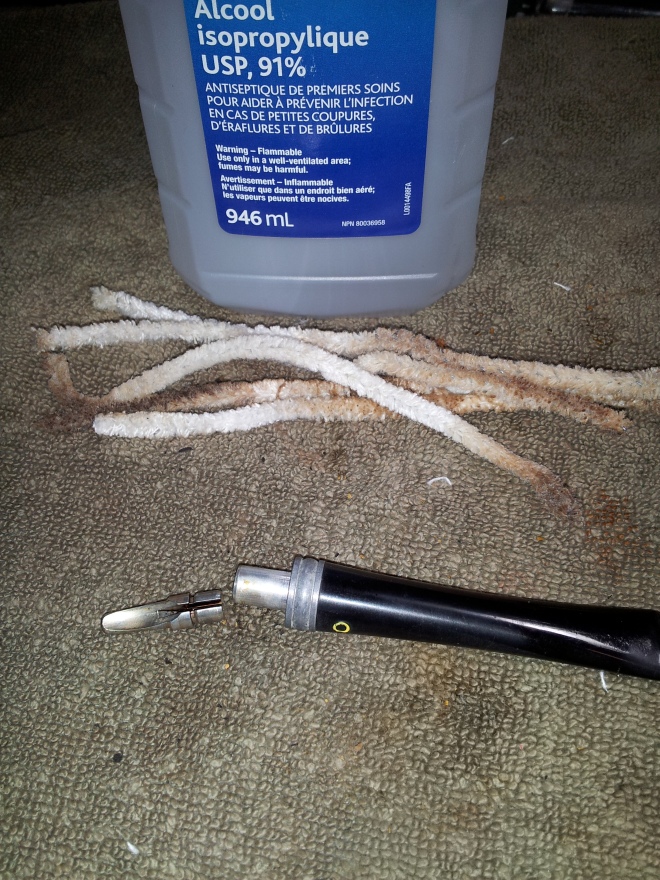 On a whim, I also used the cotton pad to wipe down the outside of the bowl. This removed the surface grime and gave me a first look at the actual Brylon, which was a two-toned red/brown colour, covered with lighter speckling. Thankfully there was no attempt made to fake a wood-grain finish. A piper would recognize it as something other than briar, but a casual observer likely wouldn’t notice anything amiss. I used the alcohol and cotton to clean the rim, then also wiped it around the inside of the bowl. I was surprised to see the remnants of the old Yello Bole coating wipe away with the rest of the grime. 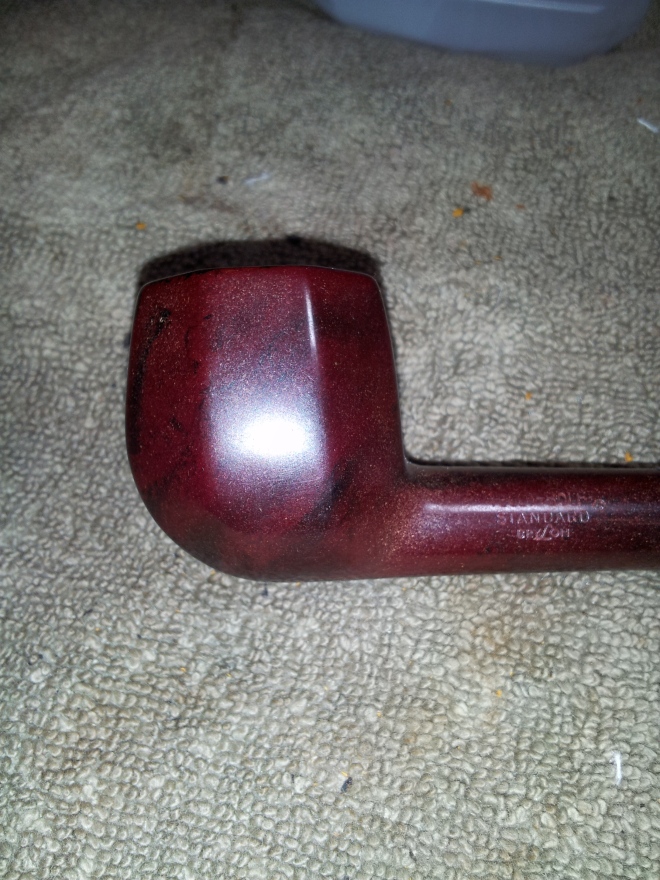 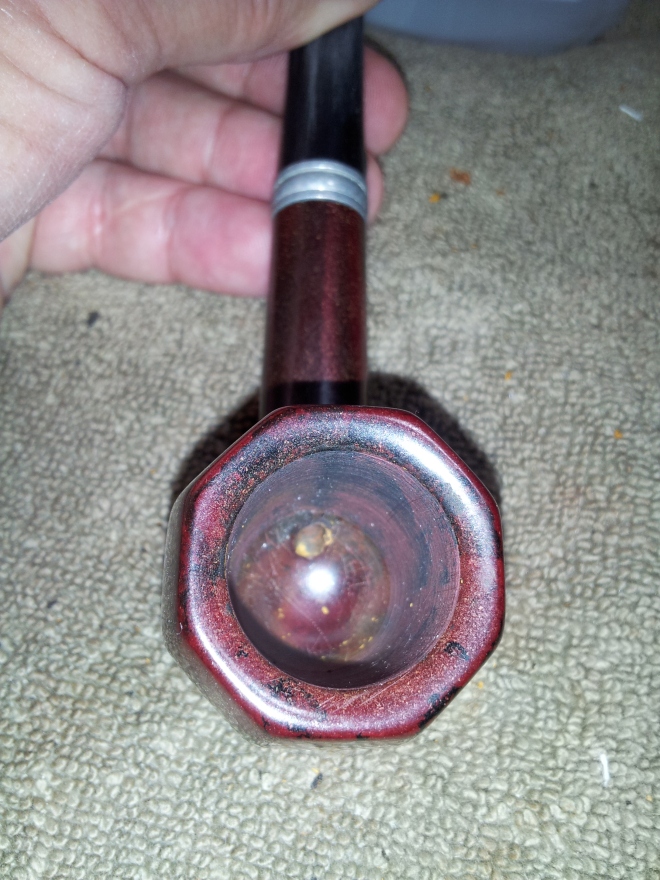 With the pipe clean inside and out, I moved on to aesthetics. I wet-sanded the entire pipe with 600-2000 grit paper. This removed the tooth chatter from the stem and improved the overall appearance of the Brylon, diminishing the prominence of the speckles in the finish. 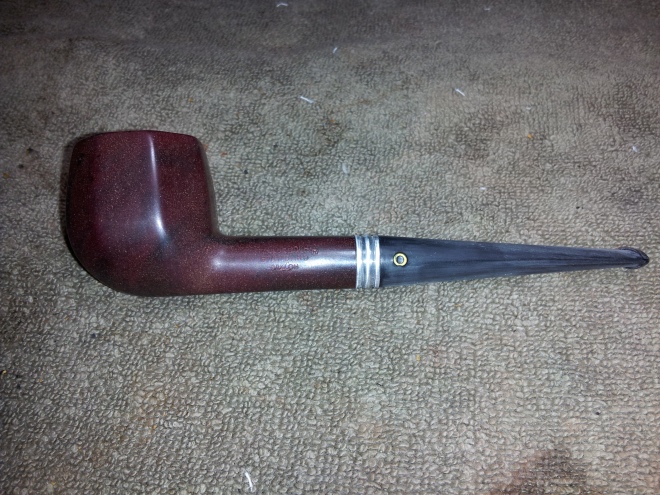 I decided to treat the whole pipe to a full course of MicroMesh sanding pads, from 2400 through 12000 grit. The stem reacted as expected, getting smoother and shinier with each successive grit. The Brylon bowl, I am happy to report, also improved, though not as much as the stem. 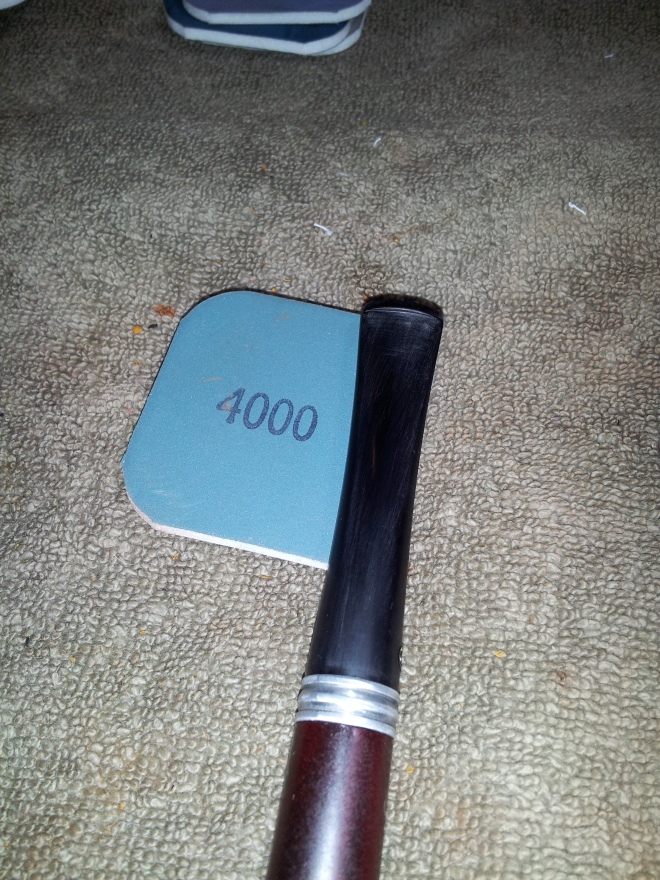 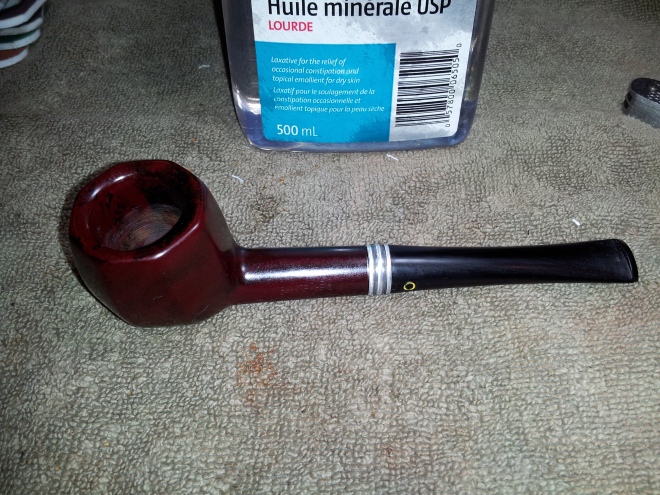 I wiped the pipe down with mineral oil before taking it to the buffer. I buffed gently with Red Tripoli and White Diamond compounds before applying several coats of Carnauba wax. The finished pipe is shown below.

The Brylon bowl didn’t shine up as well as a briar bowl might have, but overall, I’m impressed with the resiliency of this synthetic pipe. The octagonal panel design and shiny aluminum band lend this Yello Bole a touch of class, and if the piper should so desire, the scoop stinger can be removed to allow use of a 6mm paper filter. If the smoking qualities of the pipe measure up, this Brylon pipe may be an excellent option for use in the yard or shop, hunting jacket or tackle box. 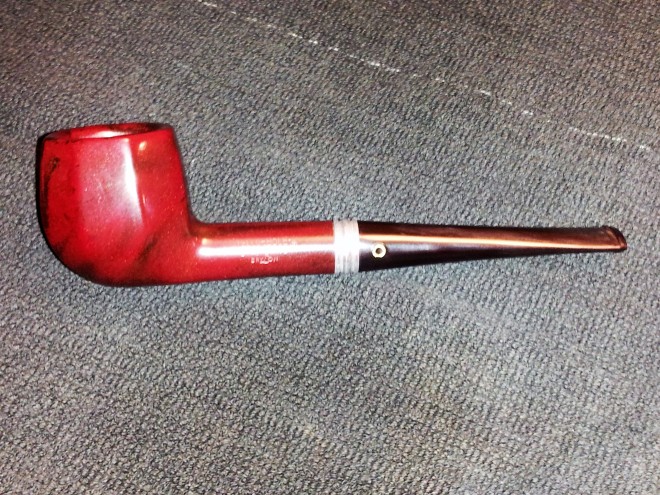 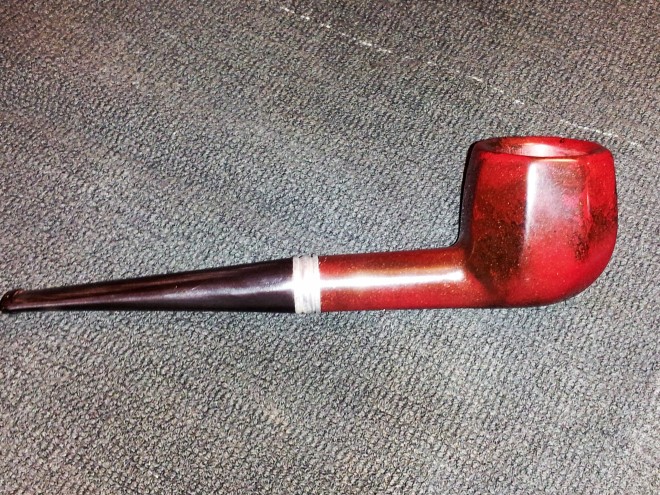 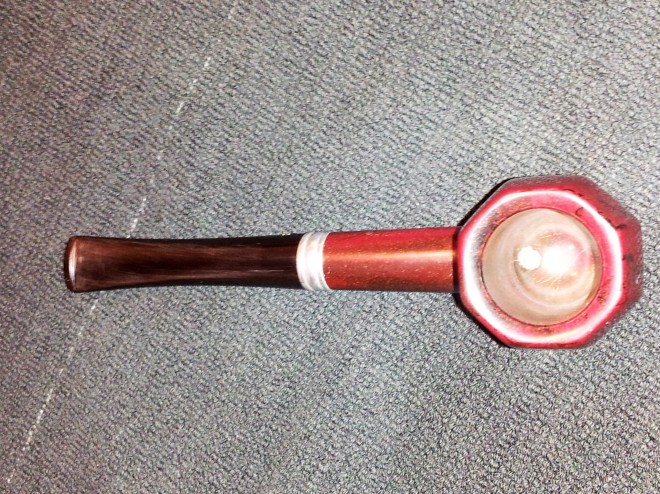 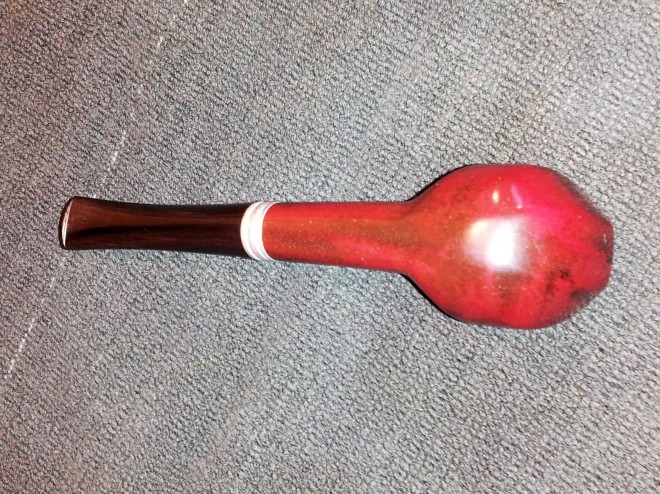 11 thoughts on “What the Heck is Brylon?? – A Yello Bole Standard Panel Billiard”