Back in early September of this year, I picked up a cased pair of pipes at a local antique sale. The first pipe found inside the nicely fitted case (marked “Special” over Barling’s” over “London Make”) was a Peterson Kapmeer 24S, about which I wrote in November.  Today’s post will look at the work done to the other pipe in the case, a Family Era Barling 1372.

As this series of pics illustrate, the Barling stummel was in pretty good nick with only a light lava film and some dings showing on the rim. The stem, on the other hand, was heavily damaged. It had been snapped off about 3/8″ behind the button, leaving a ragged edge behind. Additionally, the saddle portion of the stem had some deep scratches near the crossed Barling logo. The pipe had obviously sat in a sunny display case for some time, as the exposed Vulcanite had oxidized while the portion of stem protected by the case had remained black. 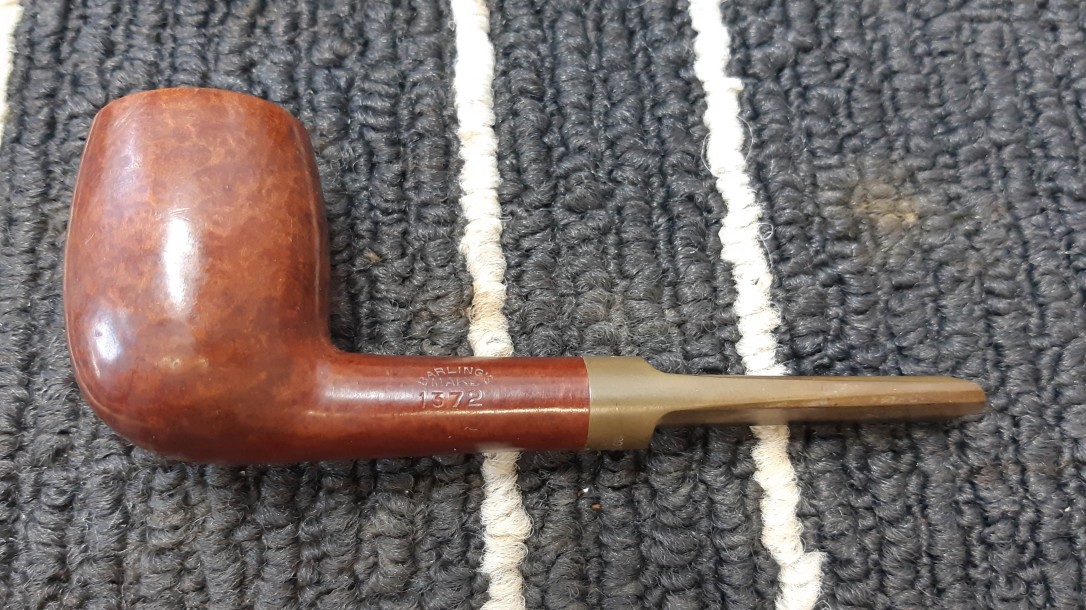 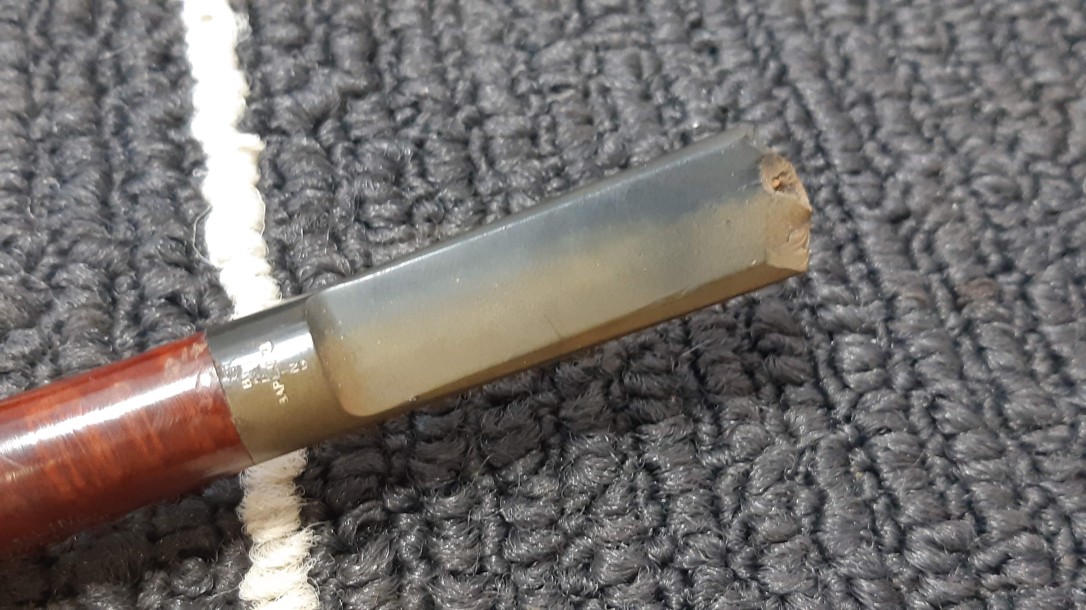 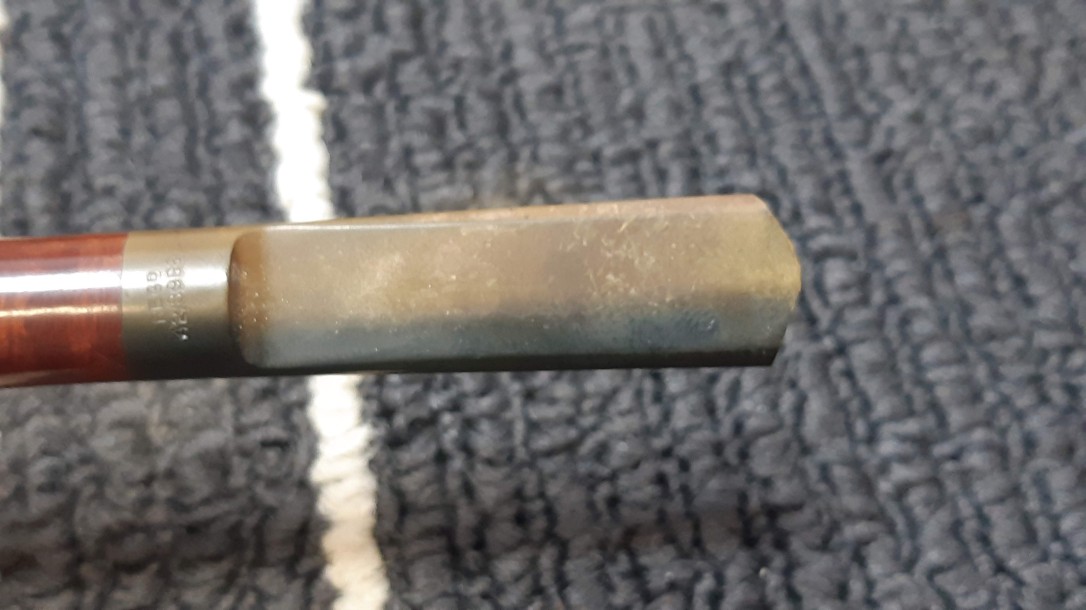 The left side of the shank is stamped with an arched “BARLING’S” over “MAKE” over “1372”, while the right flank is marked “MADE IN LONDON” over “ENGLAND” and “EL”. The stamps on the stem include the Crossed Barling logo on top and “REGD 42/8968” on the underside.

According to the information available on Pipedia, the patent number on the bottom of the stem dates this pipe to the Second World War production period of 1942-1950. The article also states that the only four-digit shape numbers belonging to the Family Era (up to 1962) start with a “1” – a bit of extra support for the dating.

As a restorer, this information presented me with a bit of a dilemma. Faced with such a badly damaged stem on another pipe, I would typically opt to install a new replacement stem. The stem on this Barling 1372, however,  carries important evidence that proves the pipe’s age and provenance. I’d hate to lose the patent number and stem logo, neither of which I am able to reproduce on a replacement stem.

While I debated various courses of action for the stem, I took some time to tidy up the stummel, starting with a very light topping on some 1000-grit wet sandpaper to remove the film of smoke residue from the rim. This also smoothed out the majority of the small dents and other handling marks, but exposed a scorch mark at the seven o’clock position on the rim. 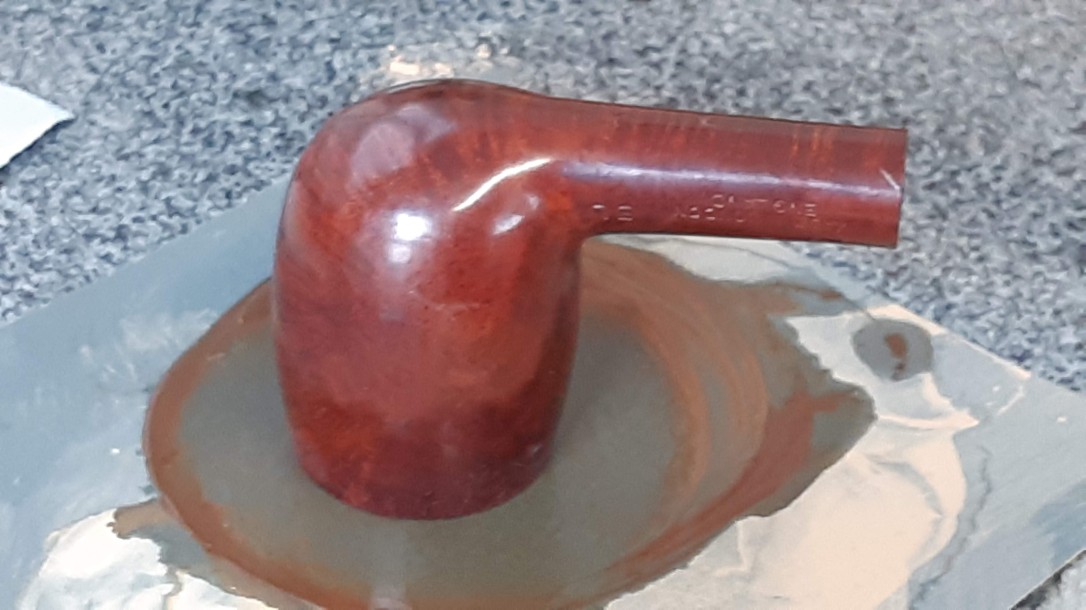 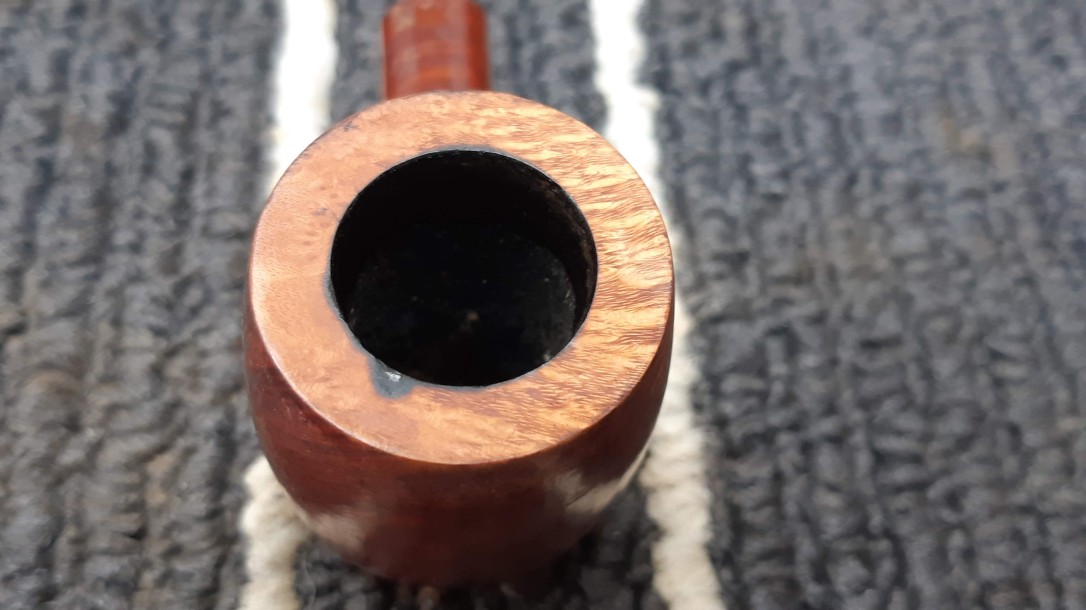 I dithered a bit about how best to handle the scorch mark, cleaning the exterior of the briar with alcohol on a cotton pad and removing the light carbon cake from the chamber before ultimately taking the bowl back to the topping board and removing a bit more material in order to erase the scorch mark. In the end I needed to remove very little additional briar to achieve a good result. 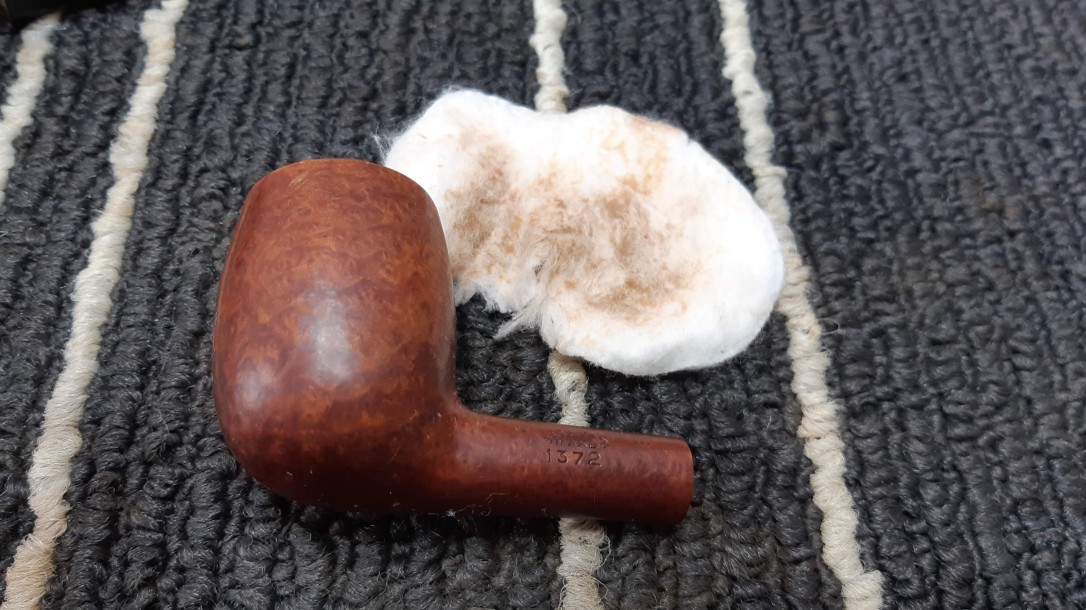 I polished the freshly sanded rim with a full course of Micromesh sanding pads in 1500 – 12000 grits. This erased the sanding scratches, deepened the colour and brought up the shine considerably.

A quick application of my medium stain pen matched the rim to the original finish.

The stummel was ready to go to the buffer at this point so I set it aside for what ended up being several weeks while I formulated a plan for the stem repair. Ultimately, I decided that the only option that would both preserve the pipe’s provenance and make it usable again was to splice a new button end onto the broken original stem.

With that goal in mind, I cut away the broken end of the stem at a 45 degree angle (or as close as I could get to 45 degrees cutting the stem by hand).

For the new button section I cannibalized roughly 5/8″ from the end of a new saddle stem blank from my supplies, also cut at an angle to make a scarf joint which should be both stronger and less noticeable than a straight butt joint. 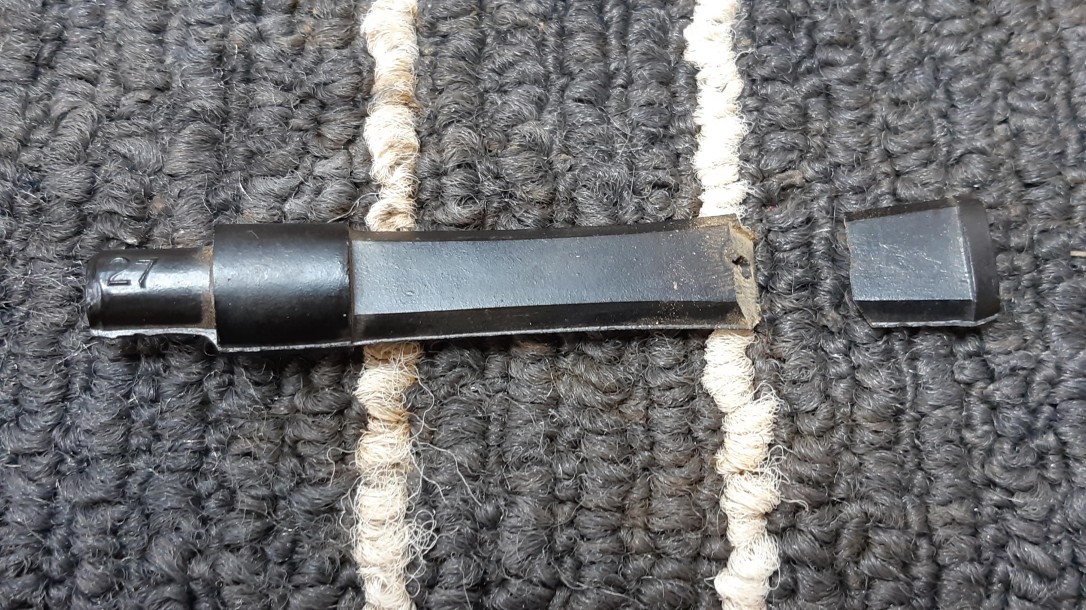 Glue alone would not keep the stem parts together under the rigours of use. To give the joint vital extra support, I cut a short section of brass tubing with an interior diameter that matched that of the stem’s airway. I drilled out the airway in both pieces to fit the outer diameter of the tubing to achieve a snug fit.

This pic shows the parts dry-fitted together. As you can see, the scarf joint doesn’t line up perfectly, nor does the profile of the new stem section perfectly match the original. There would be a fair amount of work required to achieve the desired outcome!

To assemble the stem, I worked in stages, first using a bit of JB Kwik epoxy to glue the brass tubing into the end of the old stem. With the tubing in place, I applied more JB to the tubing and the joining surfaces of the scarf joint. 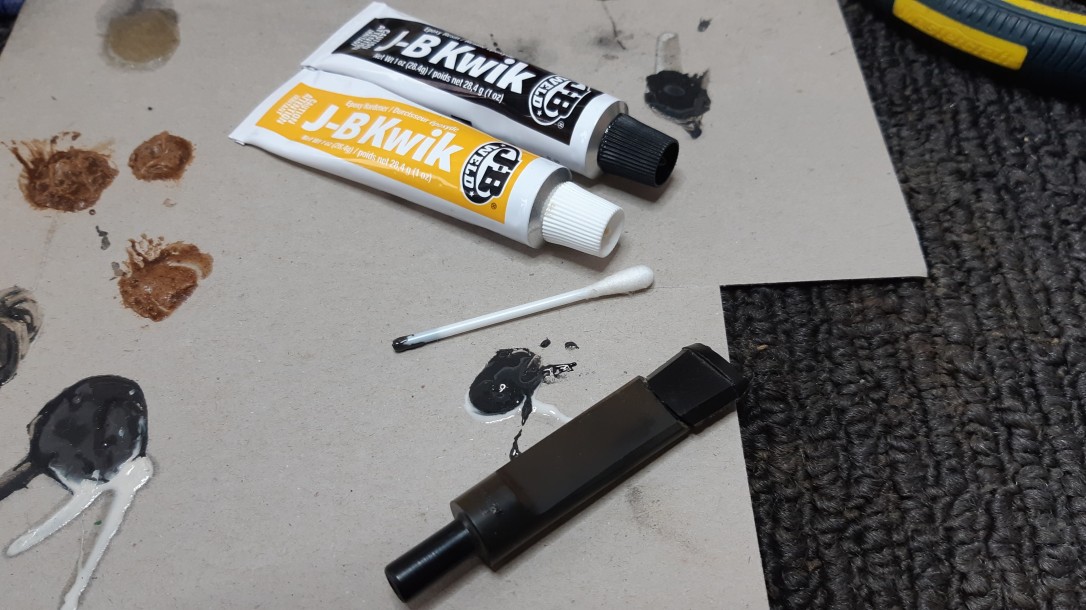 I wiped the excess epoxy off the stem and used a spring clamp to keep the pieces aligned and in place while the glue set. The pipe cleaner running through the stem helped to keep the airway aligned. 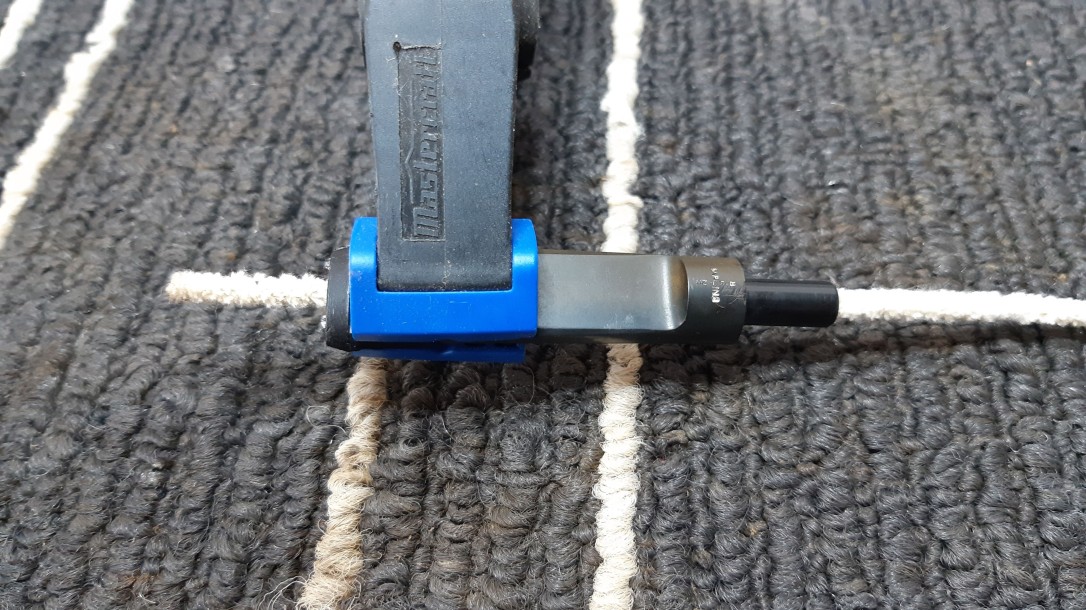 JB Kwik sets in 15 minutes, so I didn’t have to wait very long to remove the clamp and add the first of several layers of thick CA glue mixed with charcoal powder. I filled the gap between sections of stem, pushing the glue mixture as deeply into the openings as I could all the way around the joint. 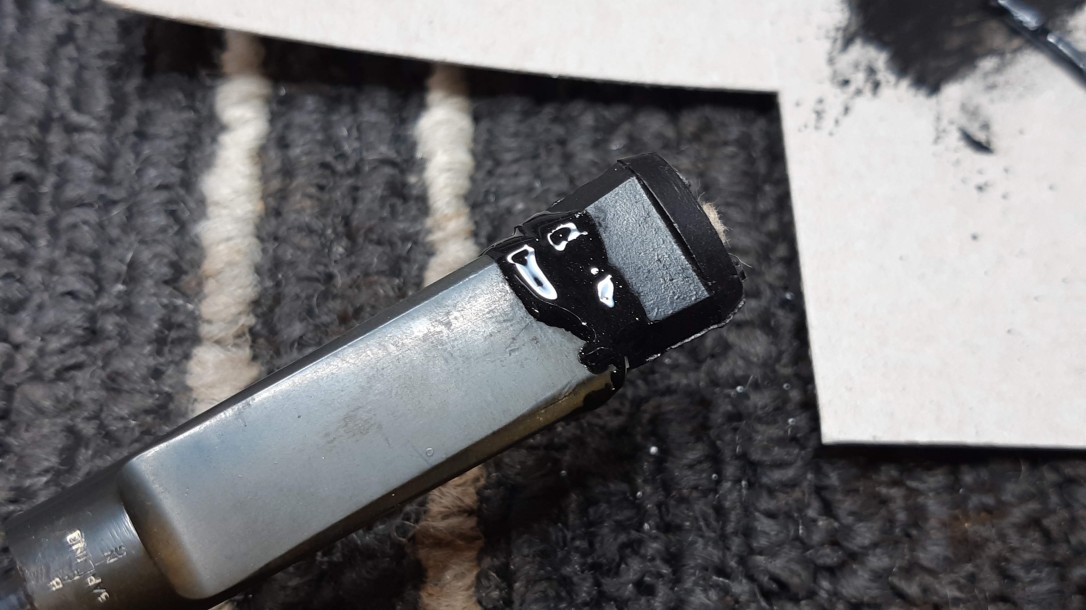 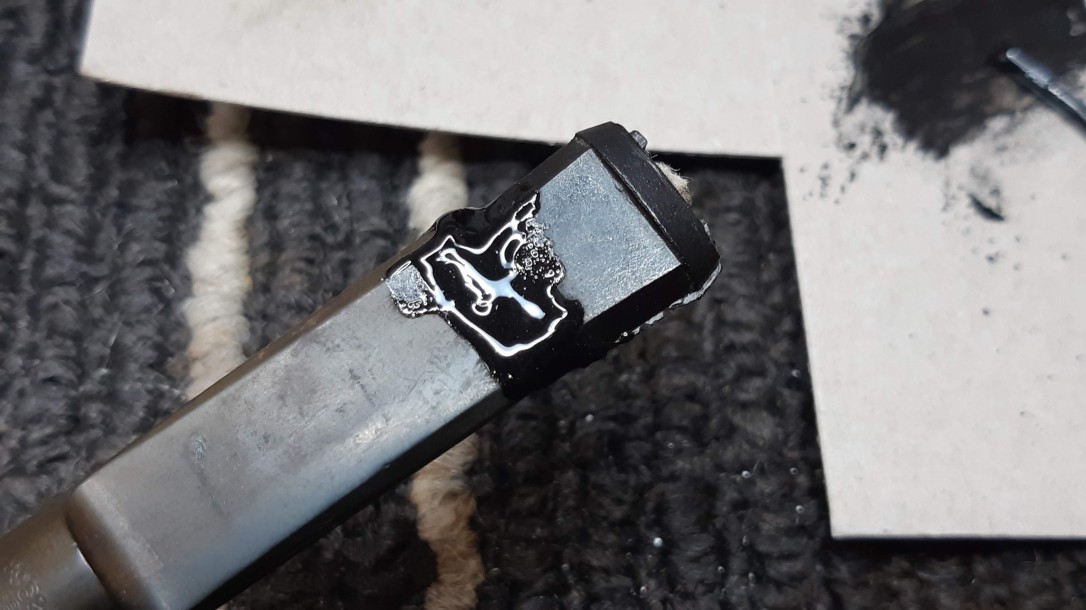 I let the CA glue patch cure overnight before continuing. These pics show the mess of cured CA glue and charcoal with which I had to contend.

I worked with a combination of files and sandpapers to first remove the excess patch material and begin the rough shaping of the stem’s new profile. 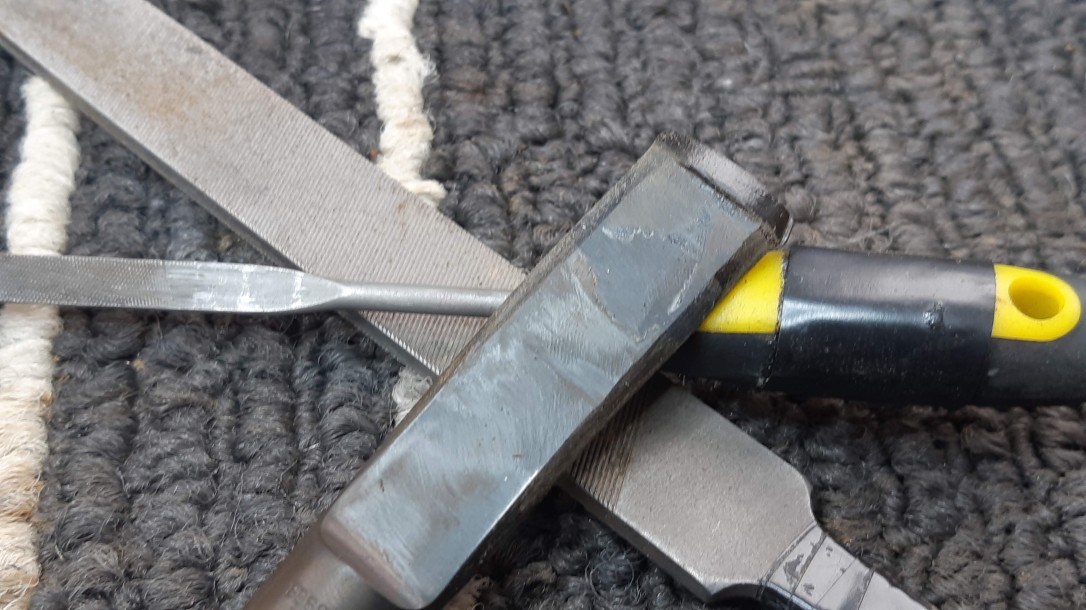 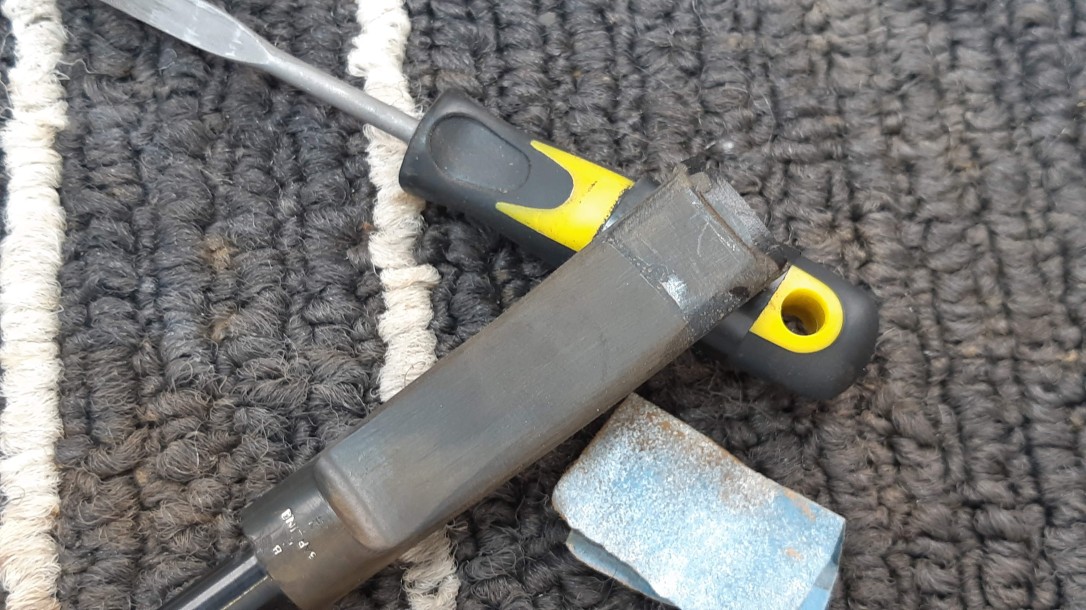 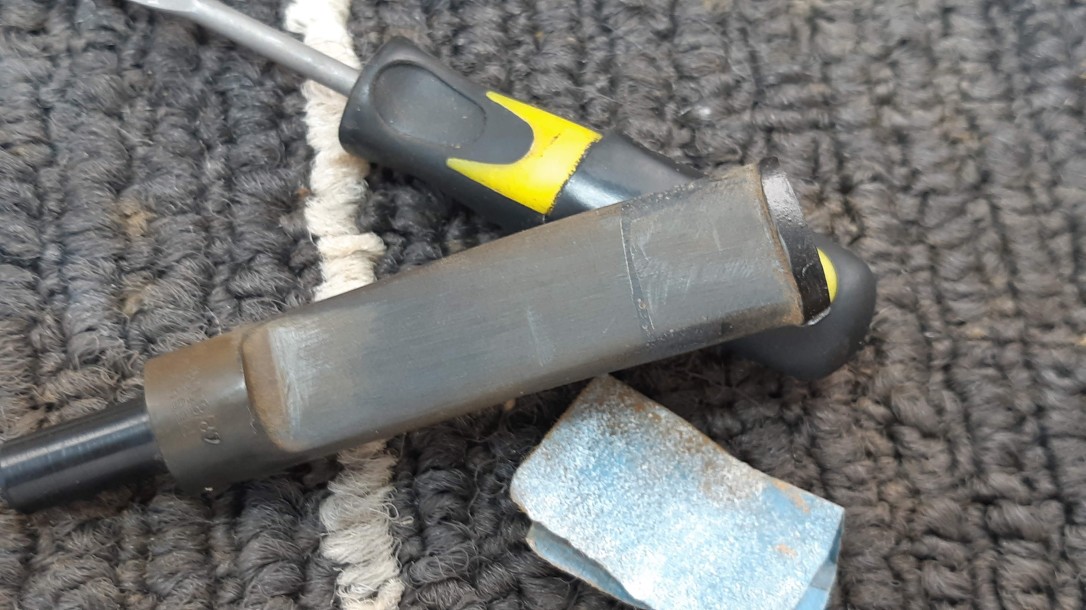 I had to go back over the stem several time with first the CA glue and charcoal mixture and then with clear CA glue before all the major gaps and air pockets were satisfactorily filled and smoothed, but the above in-process pics show that the stem was certainly looking much more like, well, a pipe stem at this point.

I had more filling and sanding to do before the stem was ready for buffing, but I took a few minutes at the end of the day to drop some white paint into the stamps. The Barling logo was more heavily damaged than I had first thought, but there is enough there to tell the pipe’s story, and that’s all I could really ask of it at this point. 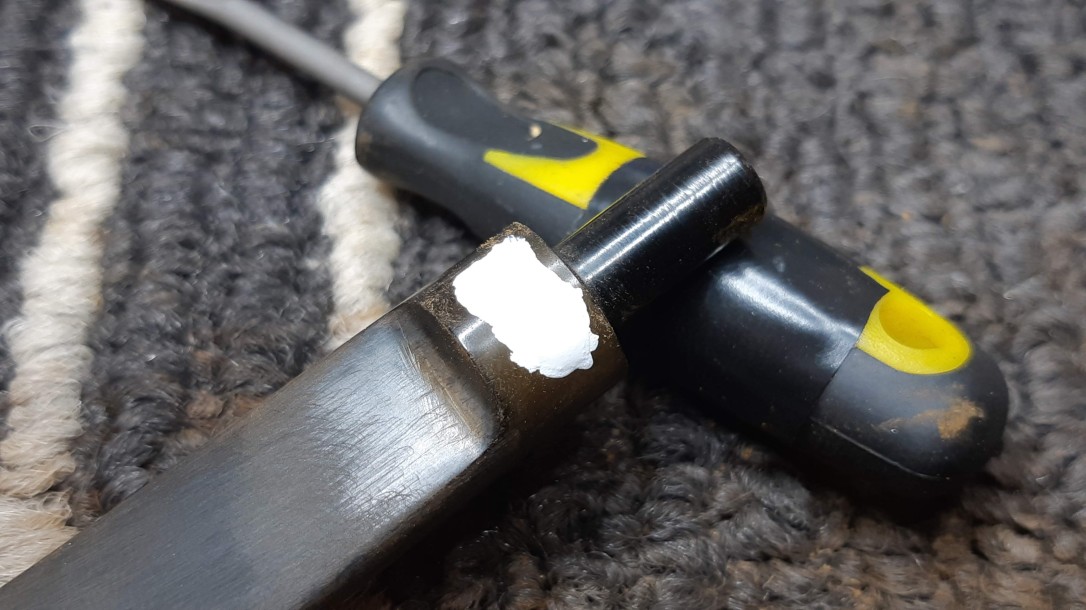 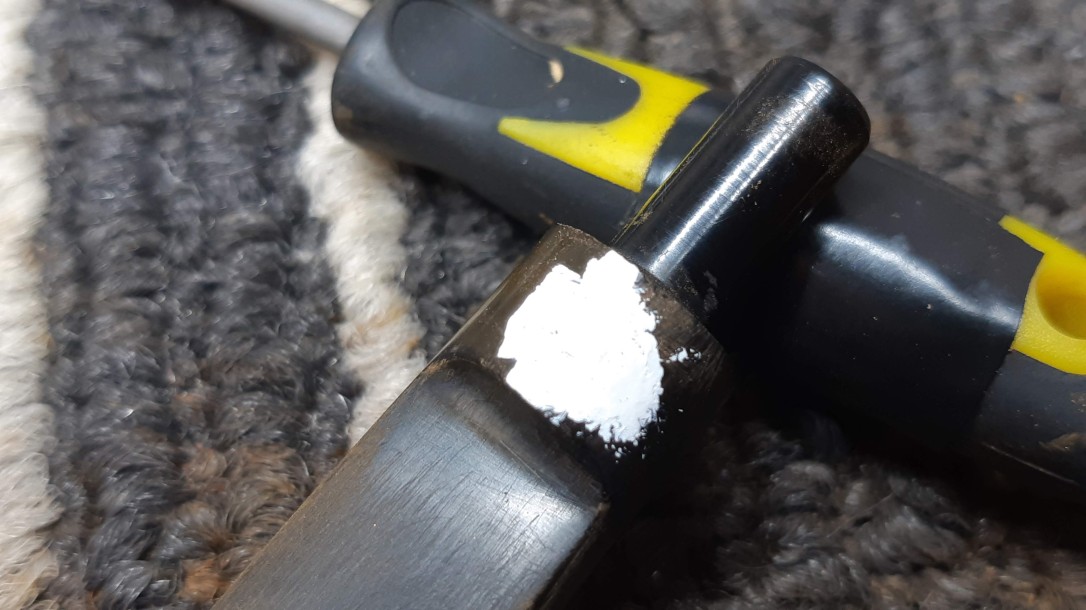 When the paint was dry, I wet-sanded the entire stem to 2000 grit, smoothing out the sanding scratches and other marks and bringing up the shine on the Vulcanite. The smoother the stem became, the more the splice faded into the background.

Finally, I reassembled stem and stummel and took the finished pipe to the buffer for a good run on both the Red Tripoli and White Diamond wheels, followed by several light coats of Carnauba wax to shine and protect the restored pipe.

While not cosmetically perfect (the splice line is still visible on close inspection), this World War II-era Barling 1372 is once again whole and functional. The repaired stem, reinforced by the brass tubing in the airway, should hold up just fine under regular use, and, if so inclined, the pipe’s next steward may hide the splice entirely under a rubber Softee bit.

I think this cased set, mismatched though it is, would make a fine addition to any pipe collection and rotation. I’m tempted to keep it for myself, but if you’re interested in acquiring this pair of Saddle Billiards, please contact me.

I learned quite a lot through this stem splicing exercise. It’s not a repair I have tackled before, and to be honest, it will not become common practice for me as it is a LOT easier to simply fit a new stem. I believe this situation, however, warranted the extra effort in order to preserve the irreplaceable stem stamps.

I hope you enjoyed following along on this estate restoration. Thanks for joining me. 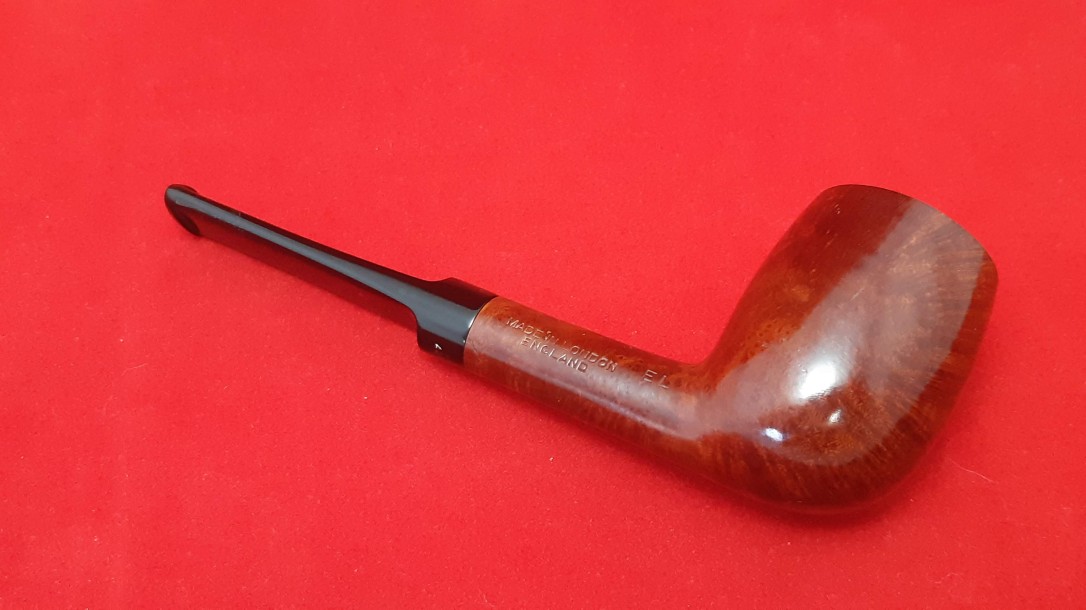 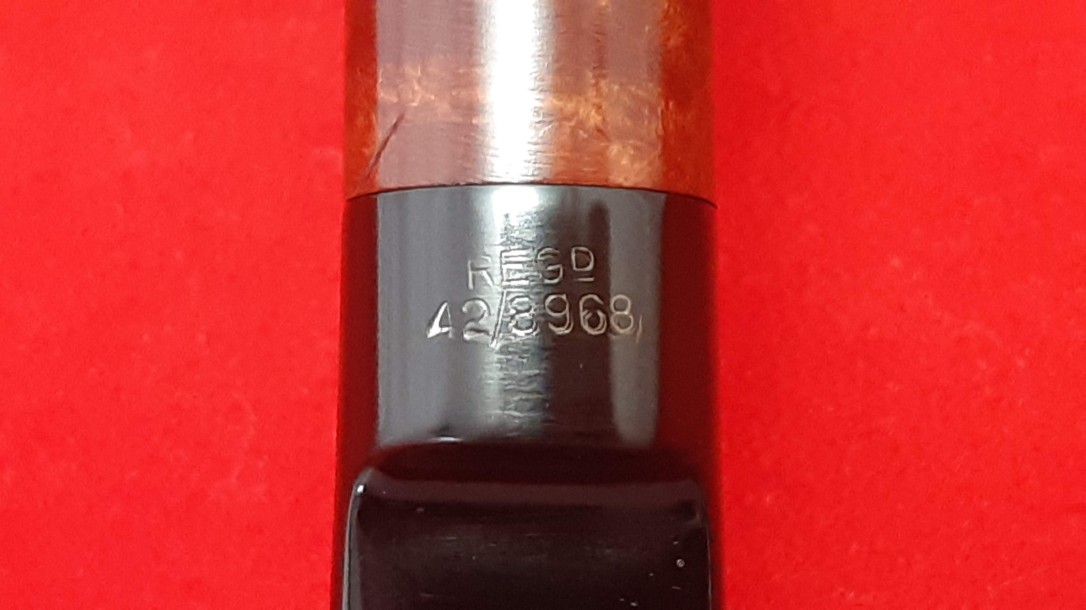 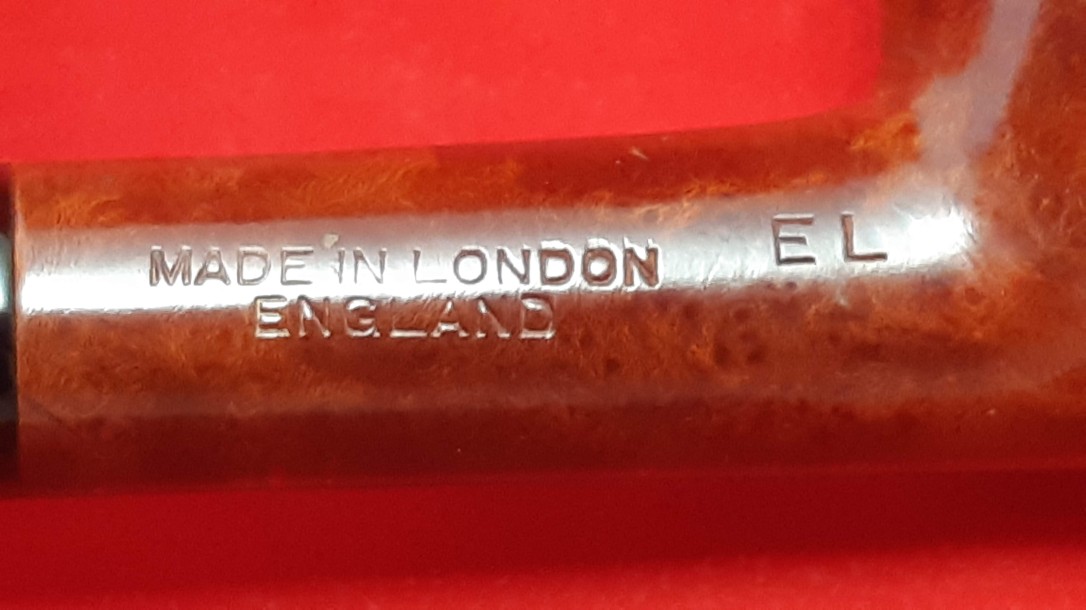 And here are a few shots of both restored pipes and the Barling case in which I found them. The Peterson Kapmeer is about 1/8″ too long for the case, but the lid will close with a bit of persuasion.