A pipeman from Canada’s Far North sent me a few pipes from Iqaluit, Nunavut to clean up for him. One of those pipes was, he said, was his favourite old Blatter Bros briar. After years of restorations and repairs, I’ve seen quite a few favourite pipes and enjoy what they can tell me about the piper that owns them.

This favourite pipe, an army-mount bent author shape, arrived in quite good shape. The exterior was a bit dirty from handling and use, the shank cap was tarnished and the stem was discoloured at the button end. The rim had developed a thin crust of lava and perhaps some darkening of the briar – I’d know more for sure when I got into the cleanup. 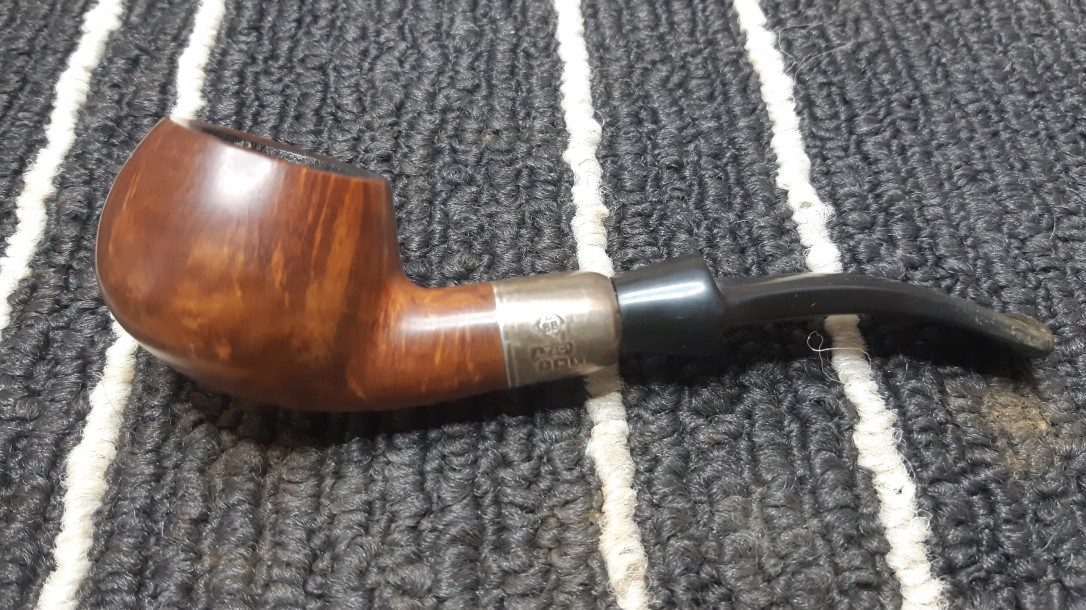 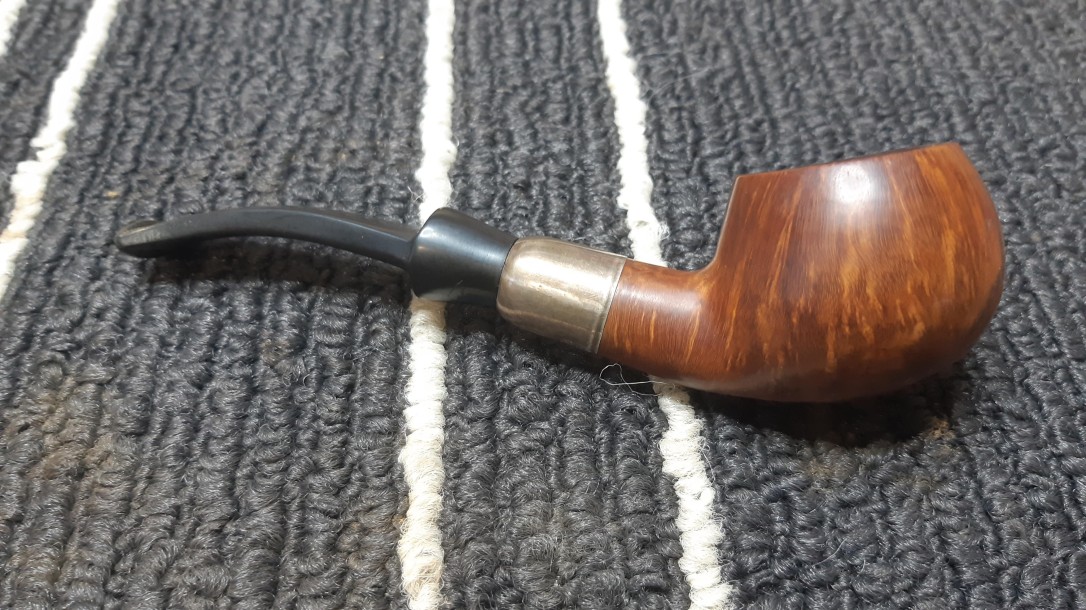 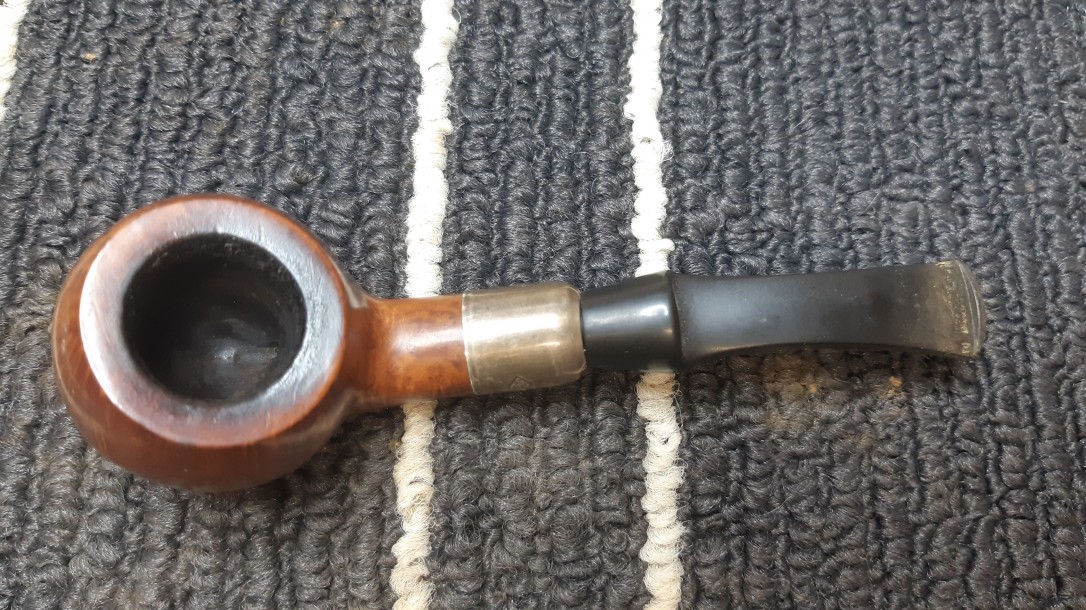 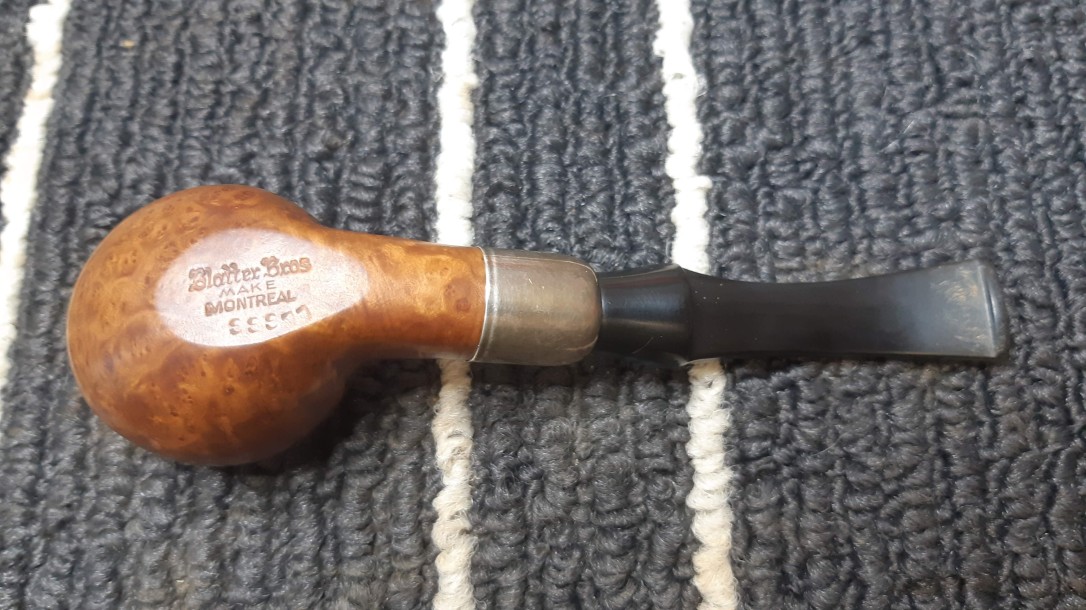 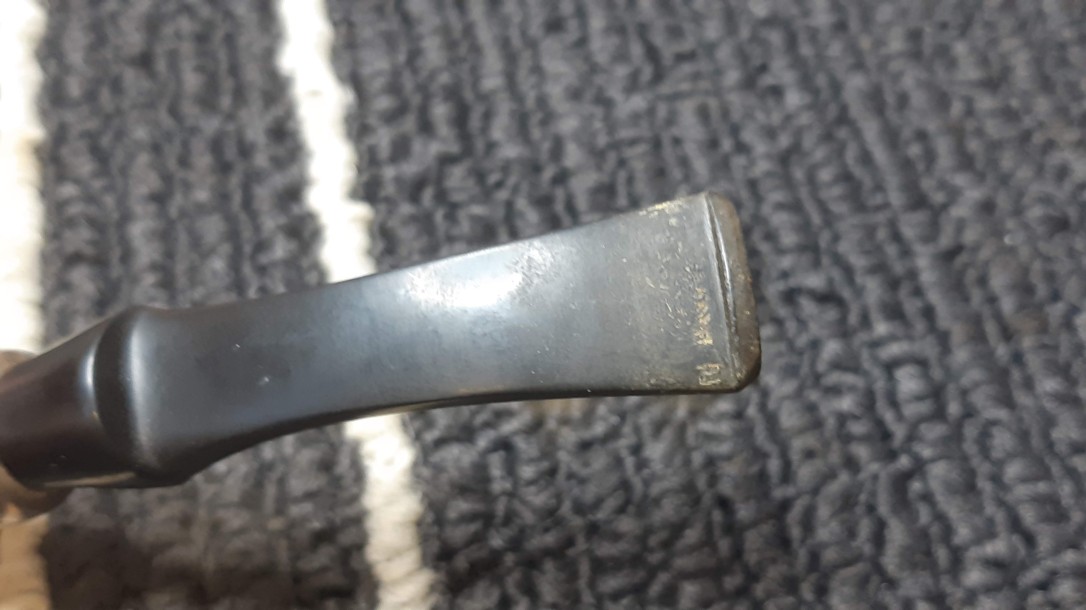 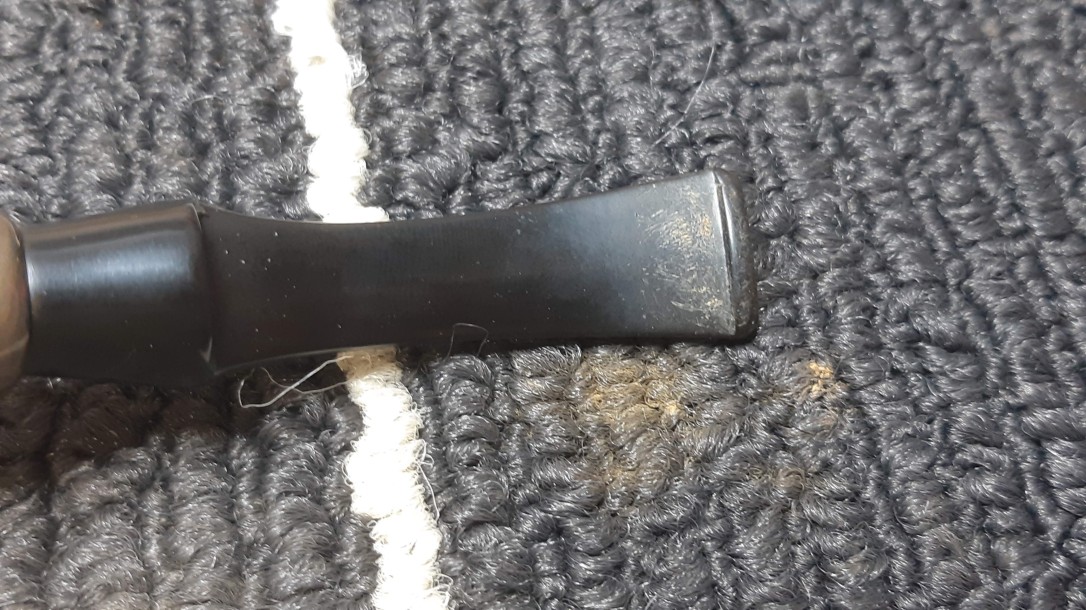 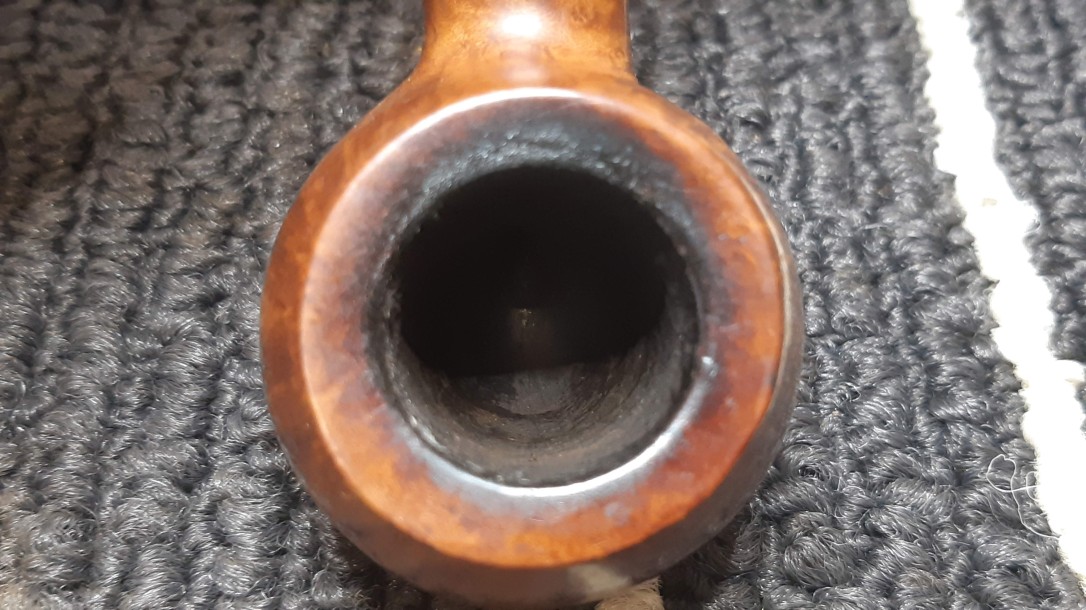 The stummel is stamped on the flat underside with “Blatter Bros” over “Make” over “Montreal” over “SSS77”. As far as I can determine, the pipe was made in 1977, but I can’t find any information on the “SSS” part of the stamp. If anyone can decipher the stamp for me, please comment below! 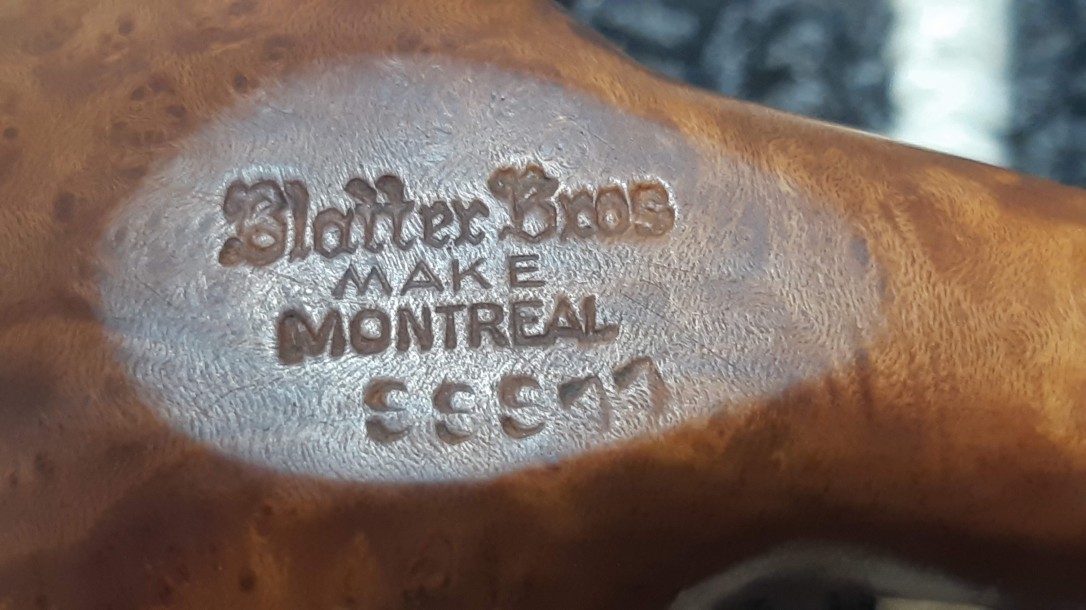 Blatter fans may have already noticed a few anomalies with this pipe that indicate an interesting history. First off, and most noticeable for me, was that the sterling shank cap is not original to the pipe, and had, in fact, been borrowed from an English pipe. The cap is stamped “BBB” in a diamond over “AF & Co” over a trio of hallmarks – an Anchor, Lion Passant, and the letter “V”. 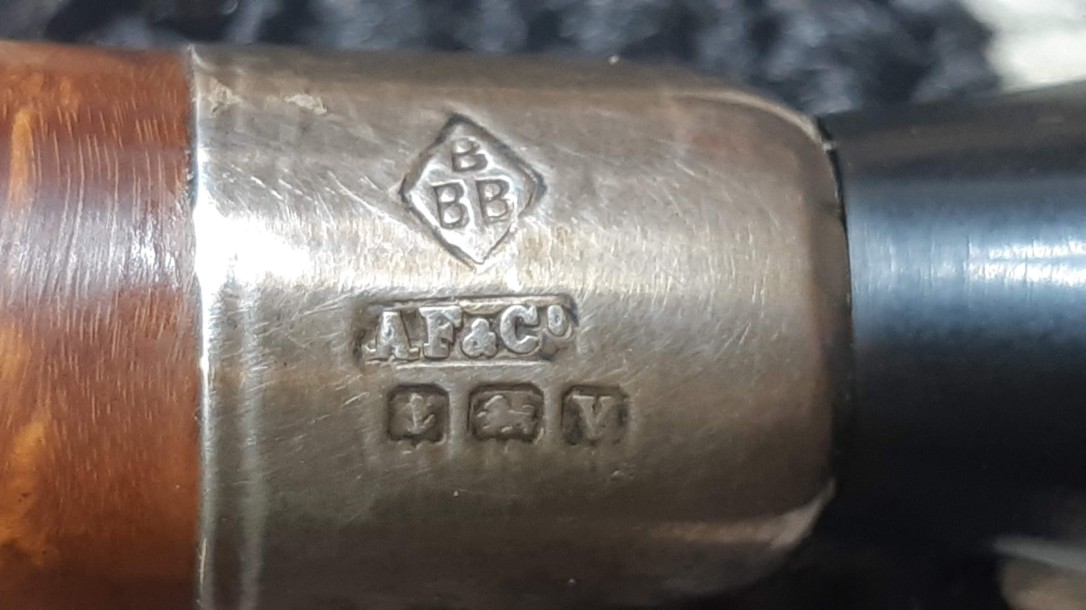 Founded in 1847 by Louis Blumfeld, “BBB” stood first for “Blumfeld Best Briar”, later “Best British Briar”. “AF&Co” indicates “Adolph Frankau & Co”, which Blumfeld ran after Frankau’s death in 1856. The hallmarks decipher as follows – the Anchor is the symbol for Birmingham, the Lion Passant indicates the band is made of .925 Sterling silver, and the letter “V” stands for the year 1945.

The second clue in the pics above is the stem – it is missing the Red Dot that Blatter insets in all their pipes.

Sadly, the pipe’s current owner couldn’t tell me the story behind these anomalies; he had acquired the pipe as an estate piece in its current configuration years ago. What, then, can be surmised? Assuming the band and stem appeared at the same time, I’d suggest that an accident of some kind resulted in a broken stem and cracked shank and that the BBB shank cap and new stem were the answer to keeping the pipe in use. They are both really well fitted, so the repairman who did it certainly knew his trade.

I used a jeweler’s cloth to remove the tarnish and dirt from the silver cap. It shined up very nicely – this pipe will be a real looker when the briar is also cleaned and polished! 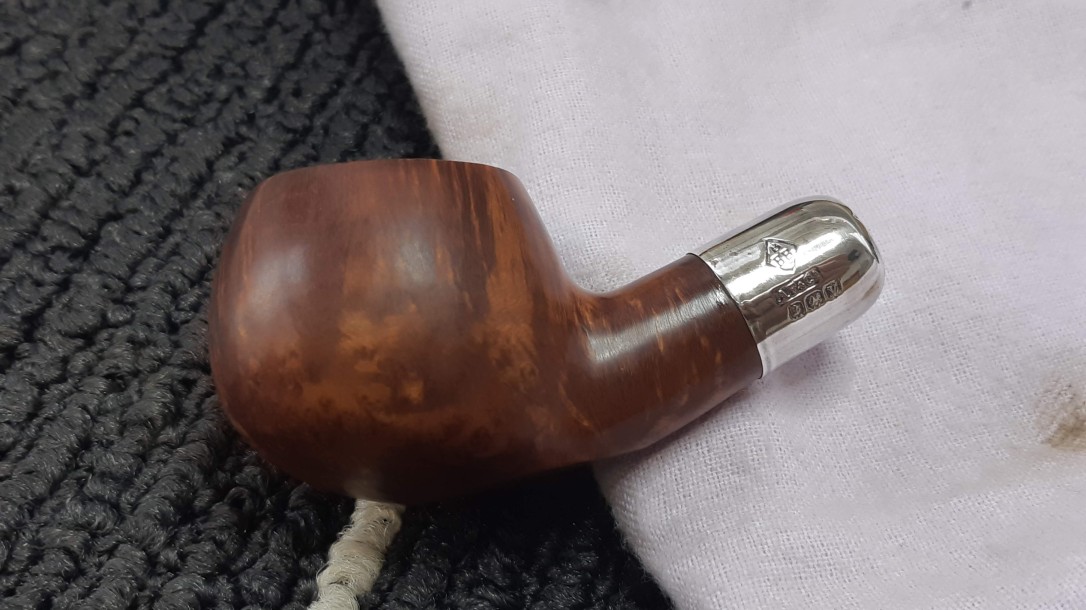 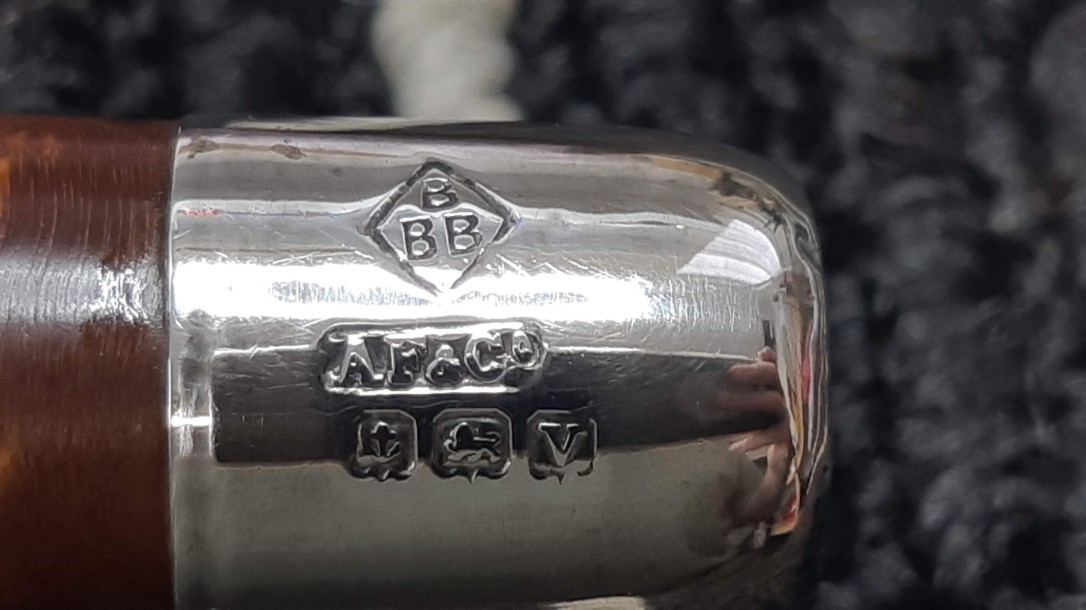 Carrying on with the cleaning, I used alcohol on a cotton pad and a few cotton swabs to gently clean the tarry lava from the rim of the chamber. I also scrubbed the exterior of the stummel. The briar was in excellent shape underneath. 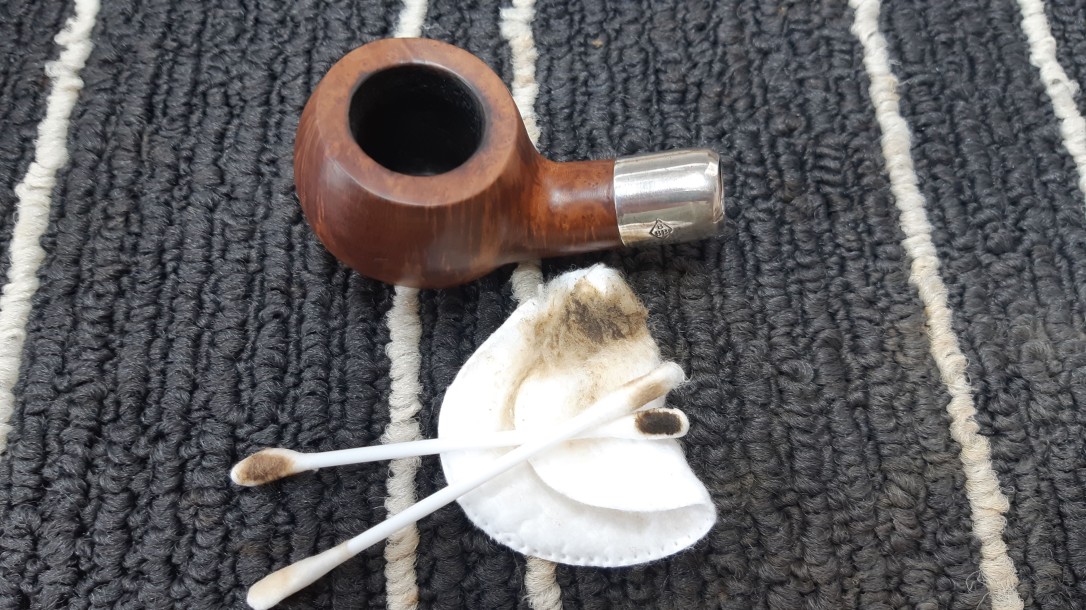 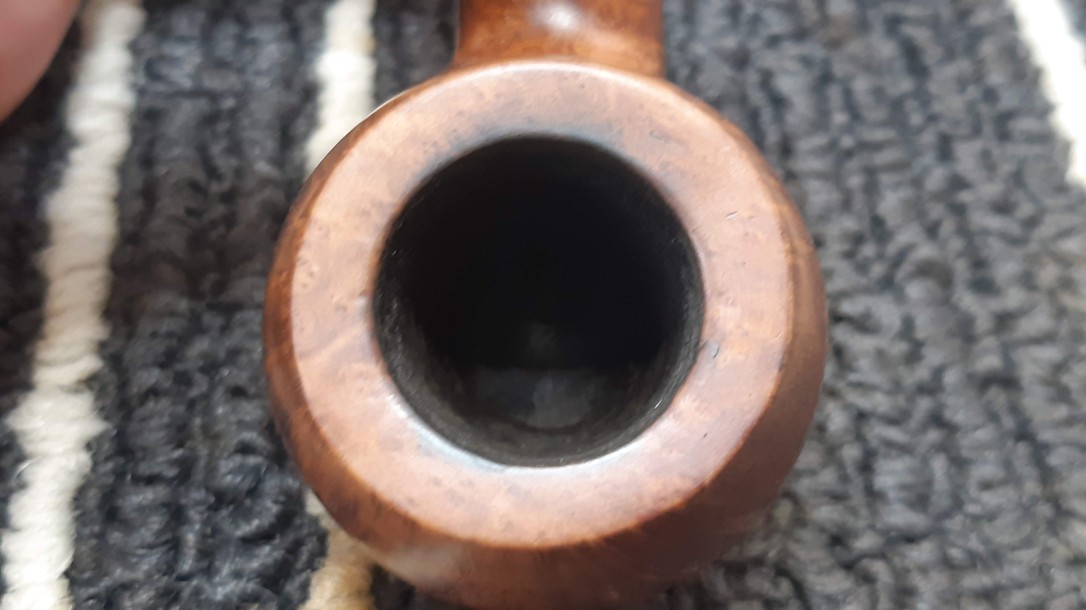 The chamber proved to be in equally good shape after I reamed the old cake away. 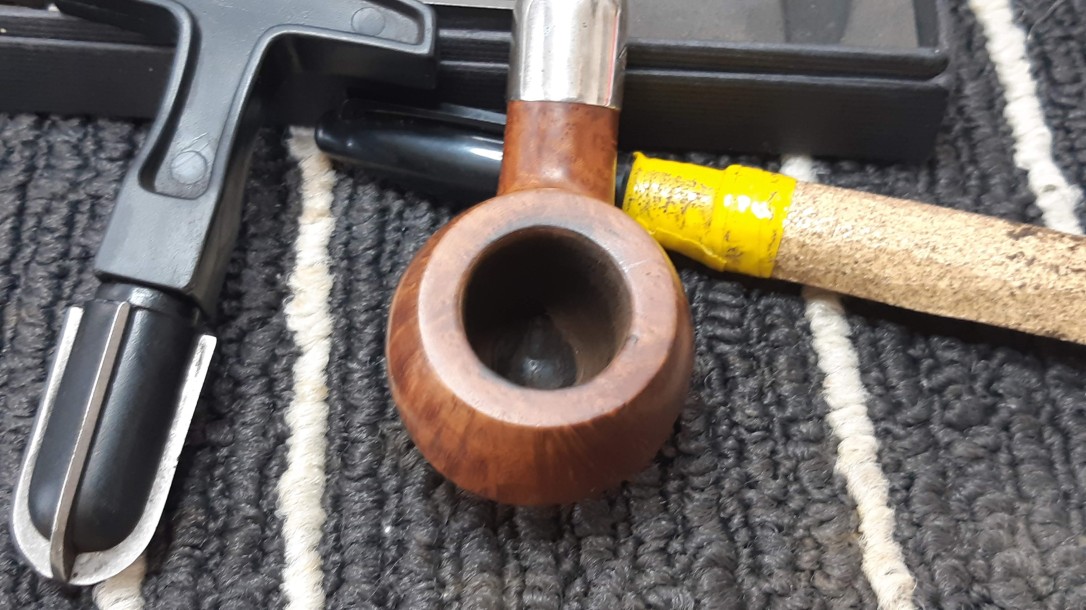 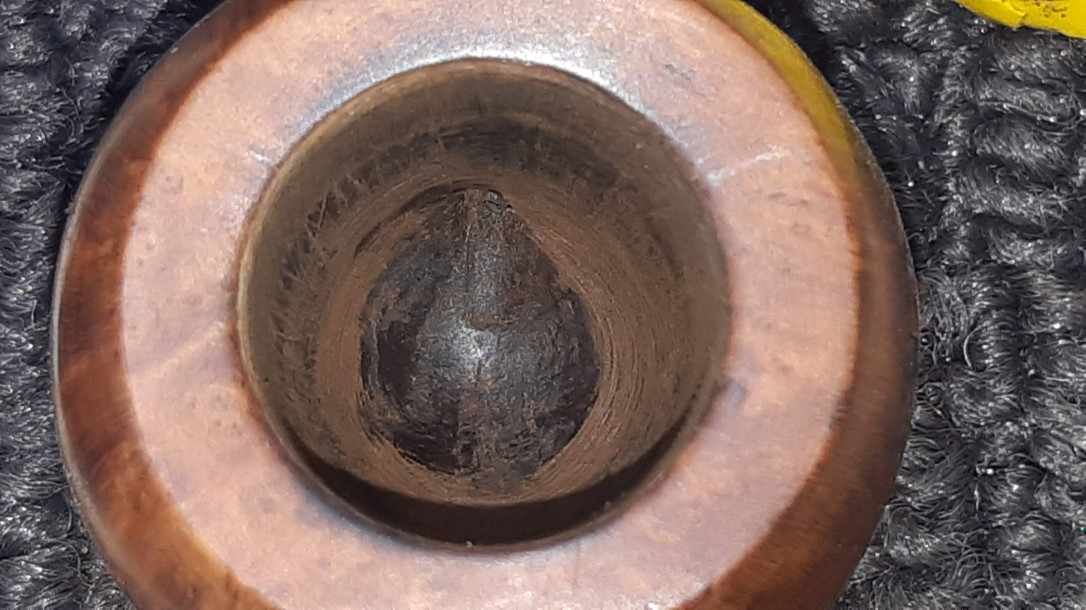 A small handful of pipe cleaners, swabs and more alcohol cleared the old tars and debris from the shank and airway. 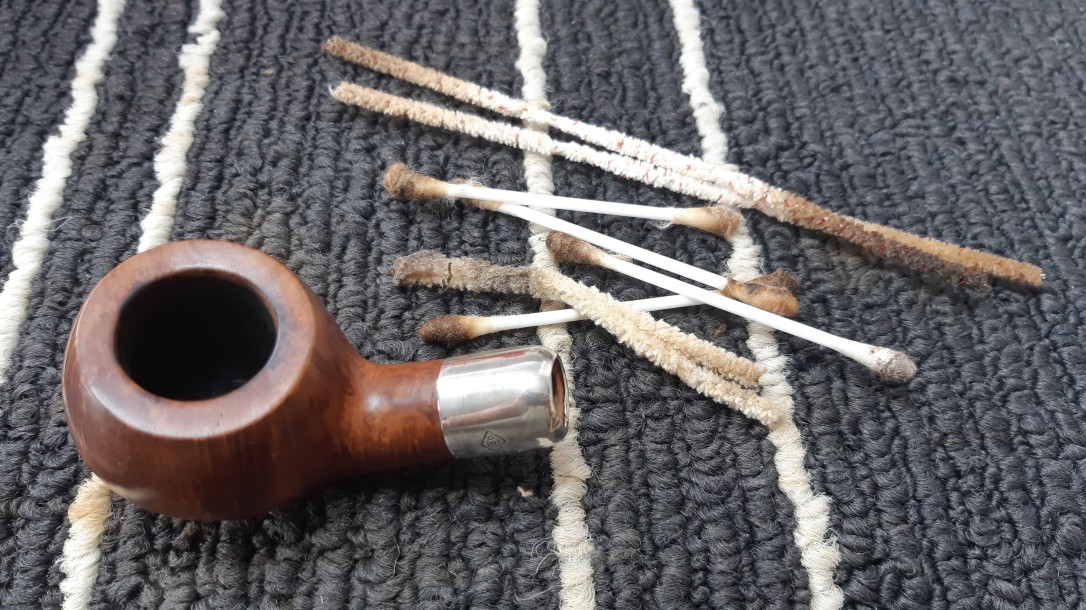 Time was getting on at this point in the day, so I popped the stem into an Oxyclean bath and set up the stummel with an alcohol treatment to purge the last of the old tars (and their accompanying aromas) from the stummel. I packed the bowl and shank with cotton wool, then added 99% isopropyl alcohol and let the pipe sit overnight. 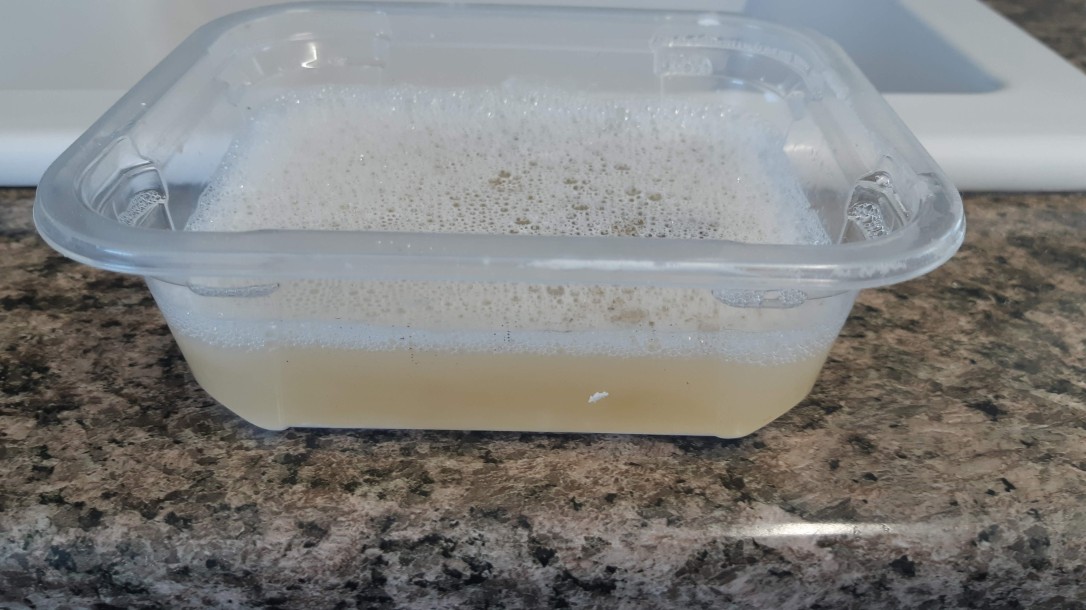 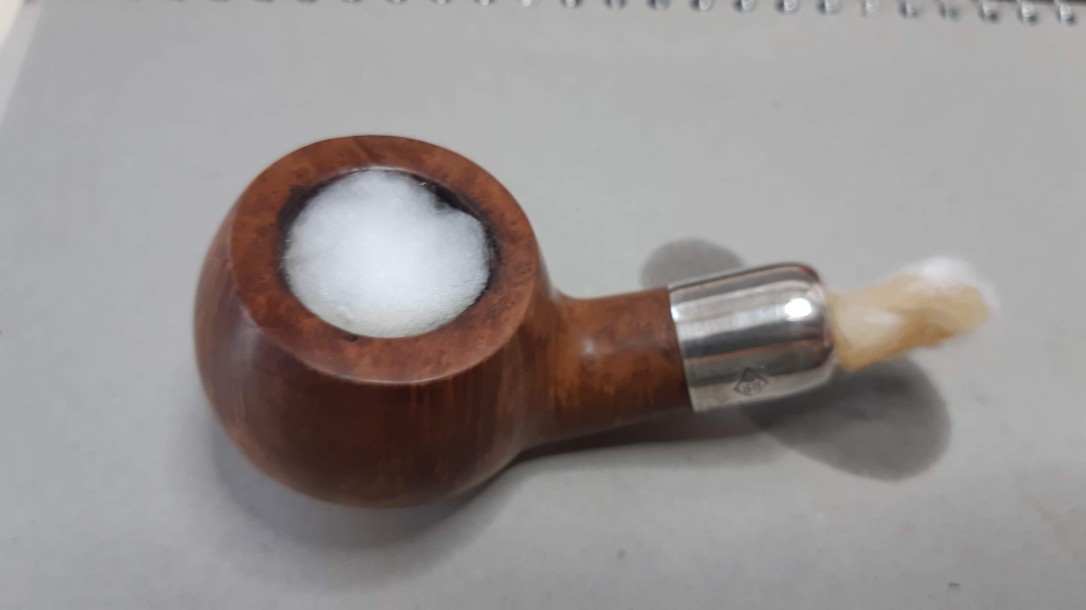 The next morning, the cotton wool had turned from white to varying shades of brown as it absorbed the tars dissolved by the alcohol. 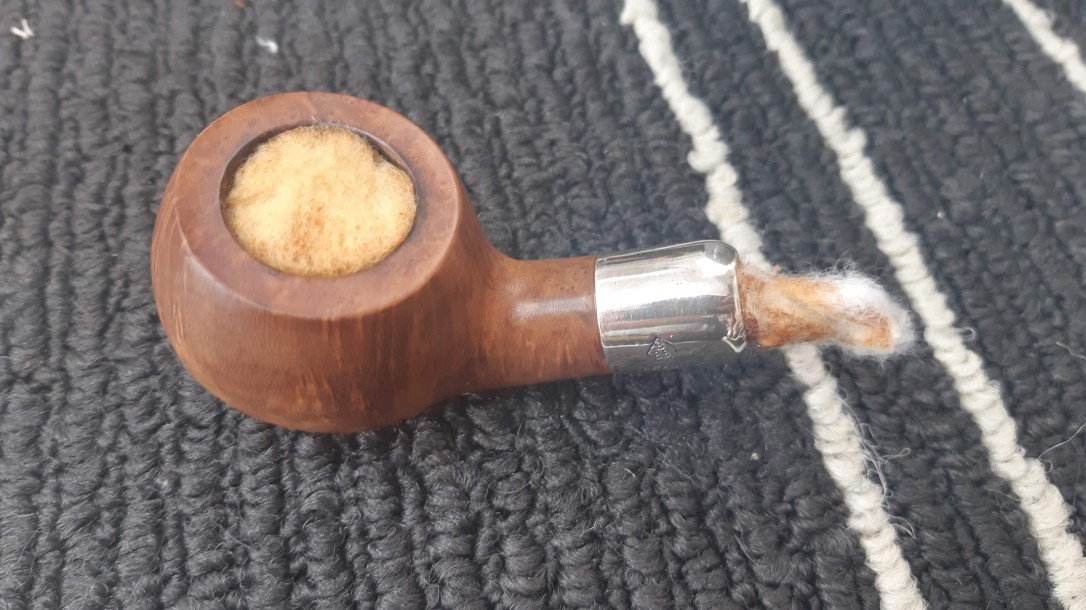 I removed the cotton wool and tidied up any stray dirt with a fresh pipe cleaner before setting the stummel aside to rest while I worked on the stem. Rescuing the vulcanite from the Oxyclean bath, I scrubbed away the light oxidation with Magic Eraser, then set about sanding and polishing the stem. 220 and 320-grit sandpapers removed the tooth chatter and scratches. I worked through successively finer grits, finishing with 2000-grit, after which I applied a bit of mineral oil to the stem. 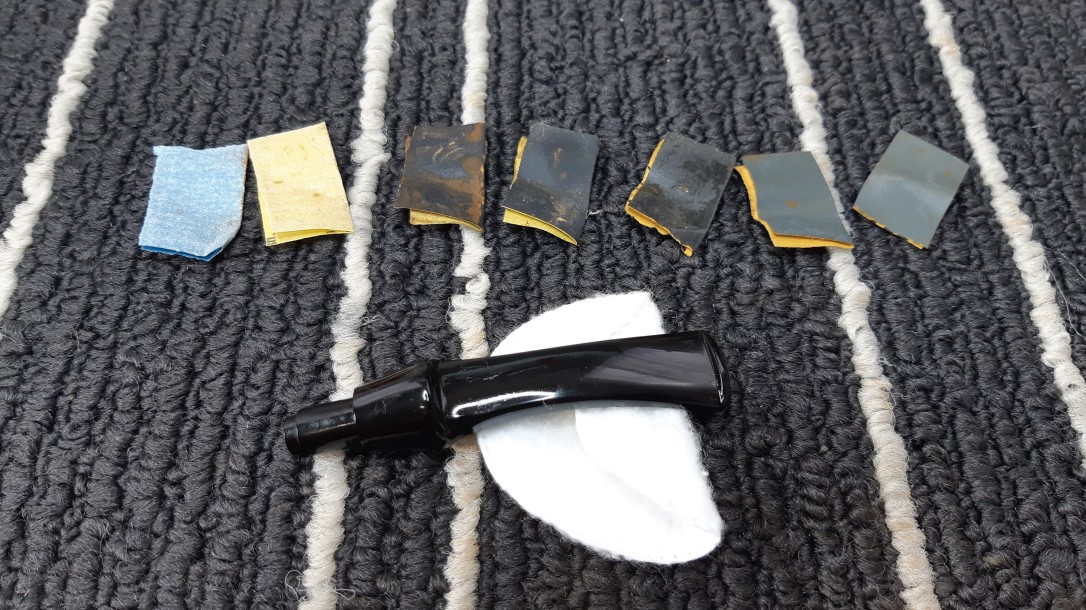 I rubbed away the excess oil after about 10 minutes, then left the stem to rest for a while. Then it was time to take the finished pipe to the buffer. The stem was buffed with both Red Tripoli and White Diamond compounds, while the briar only received the White Diamond buff. A few light coats of Carnauba wax brought up the shine and protected the refreshed finish.

The refurbished pipe is ready to go home to Iqaluit for many more years of faithful service. It is, for me, the epitome of a favourite pipe – of good original quality, well kept, and well repaired at least once if not more in order to keep it in the owner’s rotation. I’m sure its current pipeman will be glad to have it back.

Thanks for following along on this restoration journey with me. Perhaps it’s got you thinking of your own favourite pipe and the last time it got a good cleaning? 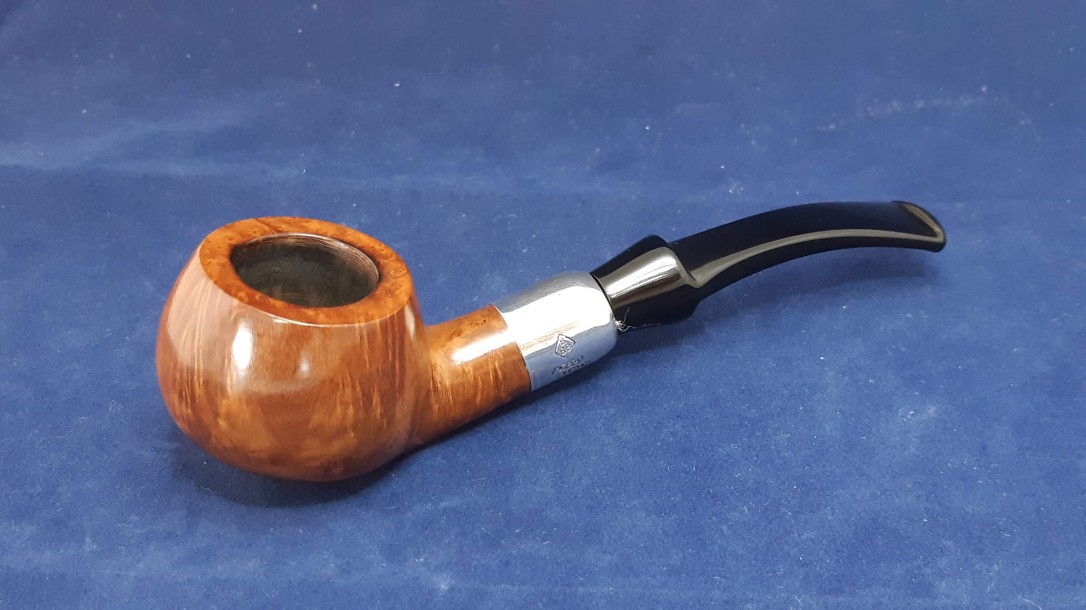 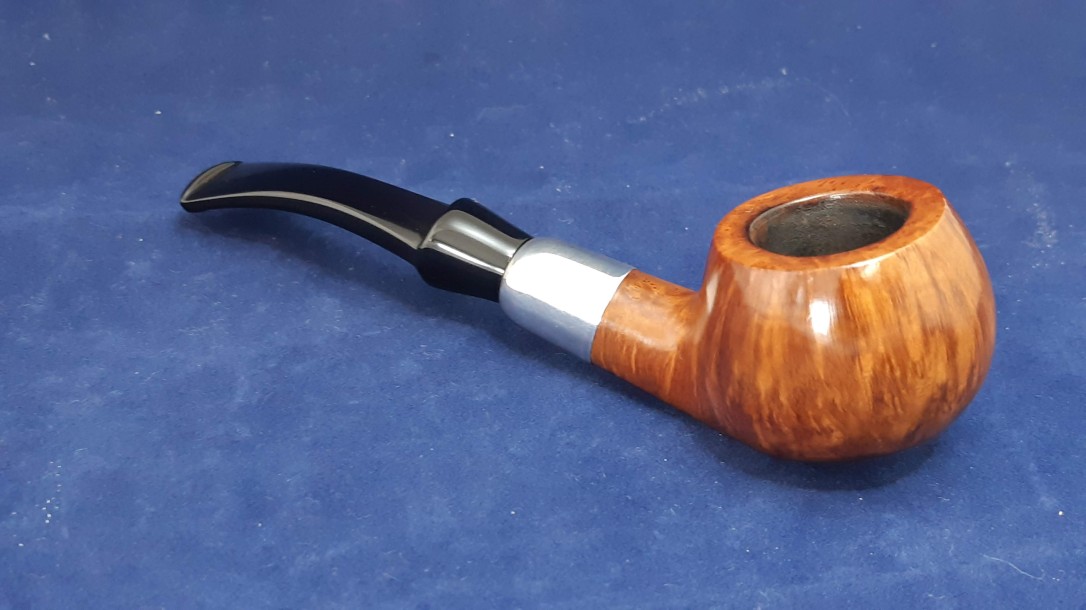 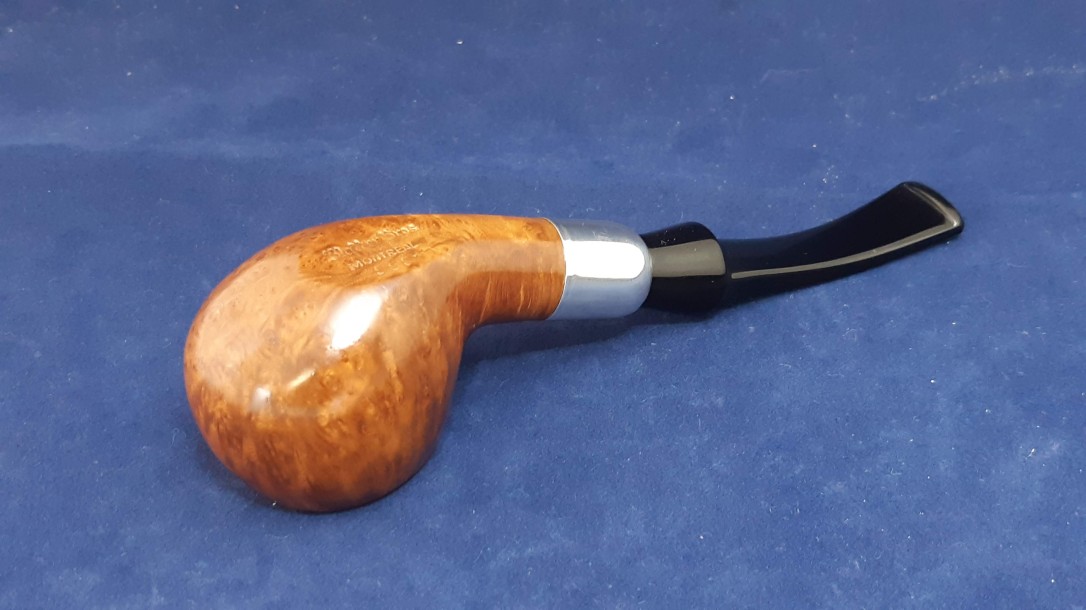 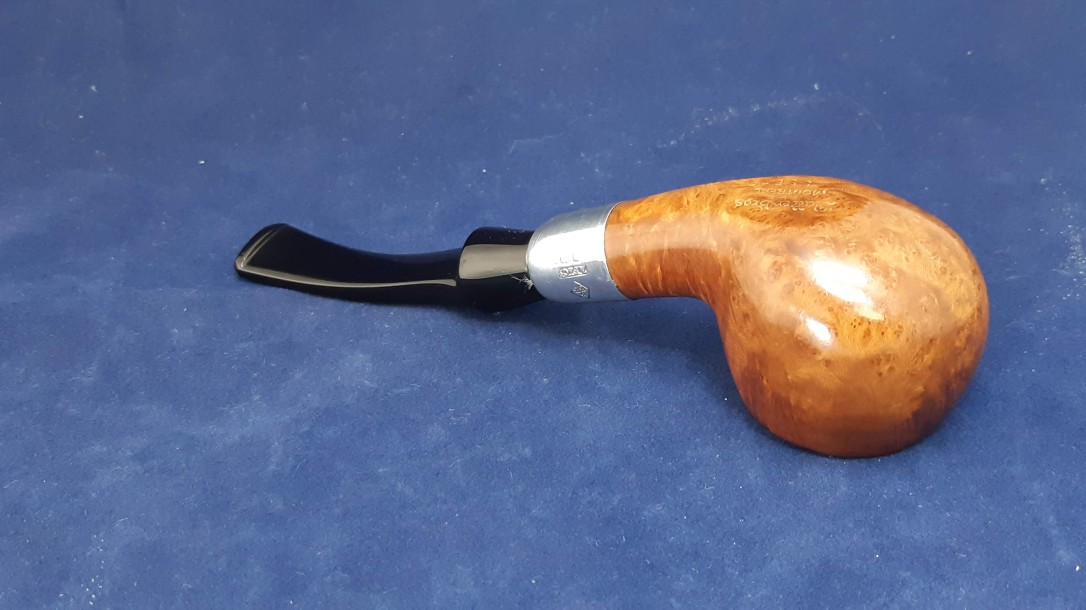 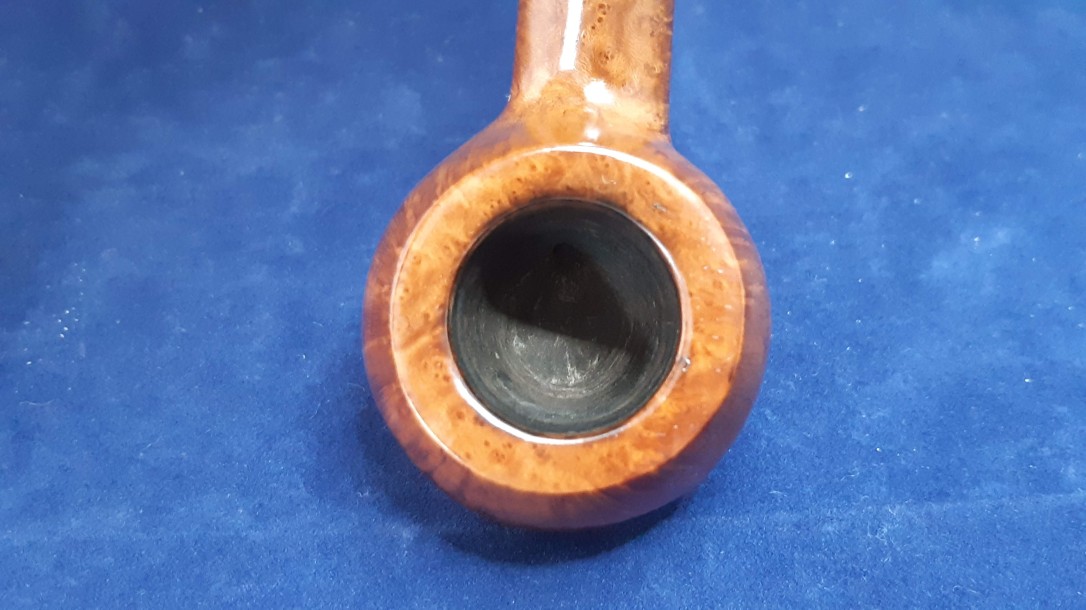 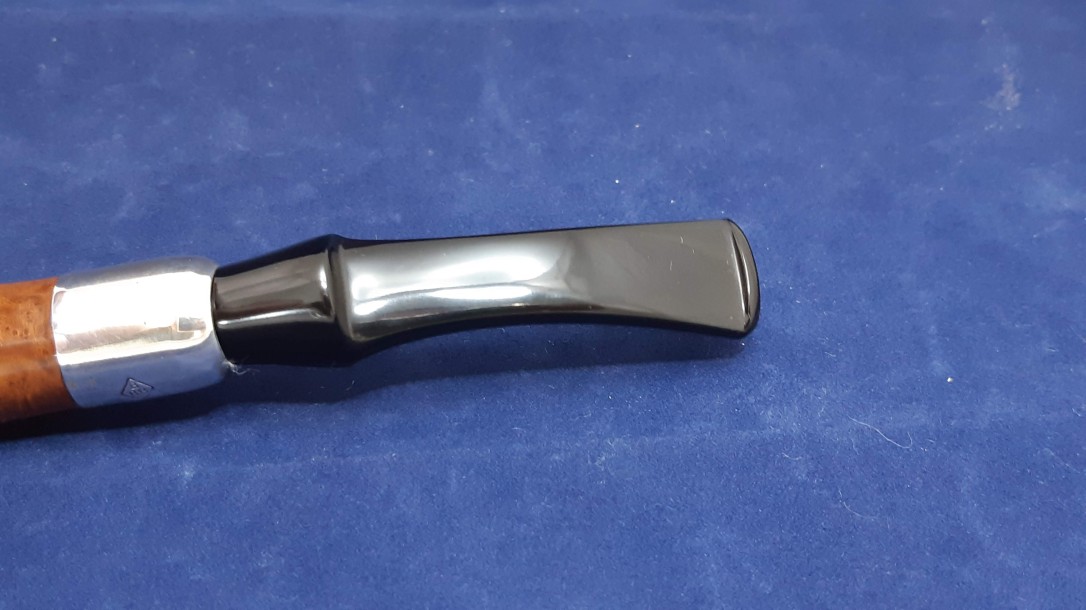 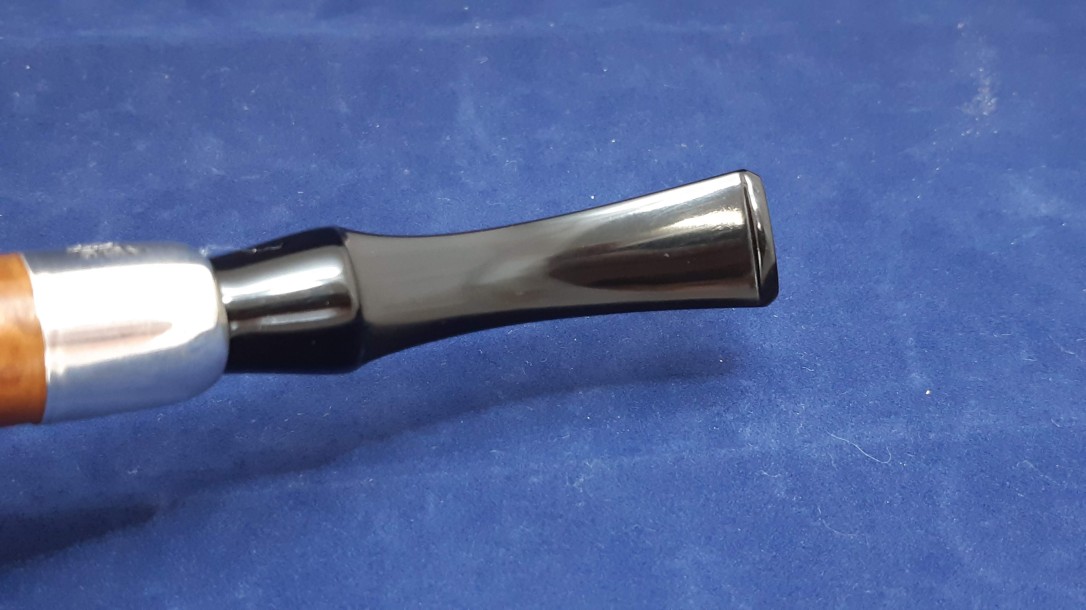 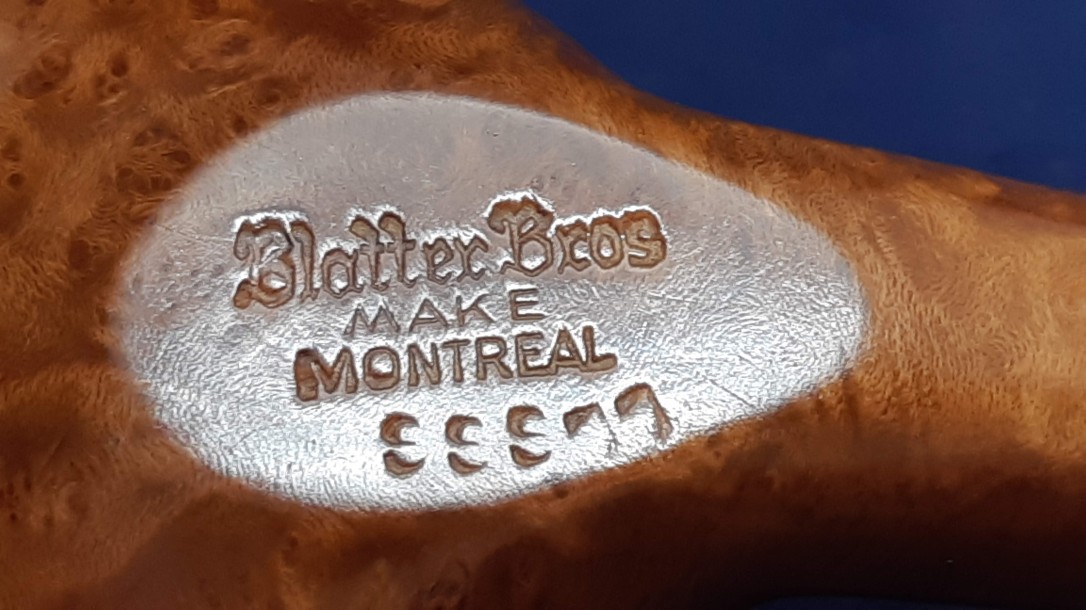 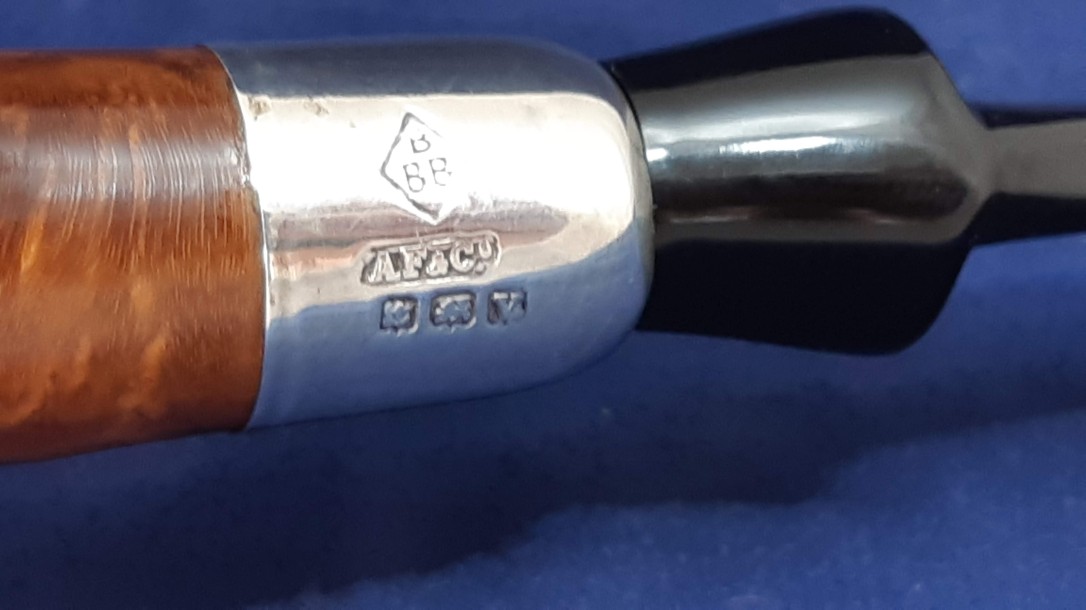 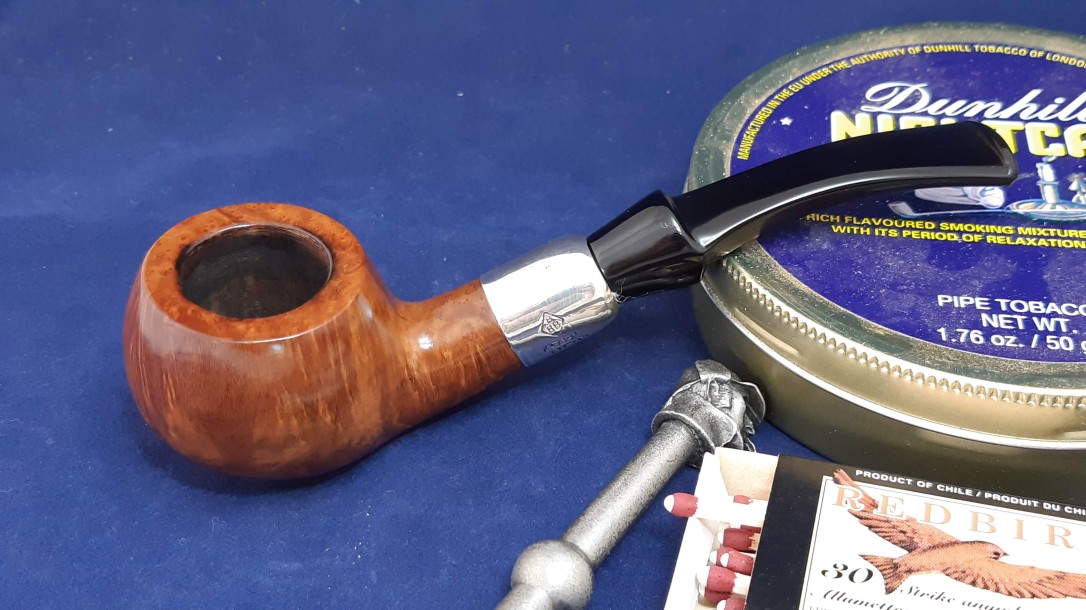 2 thoughts on “Cleaning Up a Favourite, and Slightly Unorthodox, Blatter Bros Author”