Today I’m working on the second pipe I found on my birthday pipe hunt. This one is a classic Bent Billiard by Seville. Here’s what it looked like when I brought it to the worktable. . 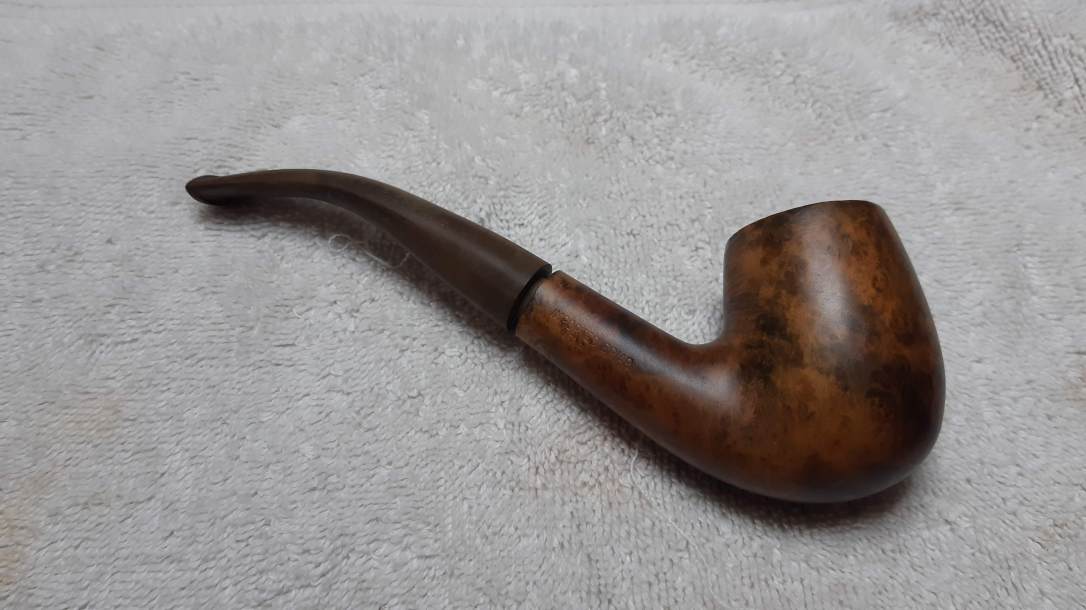 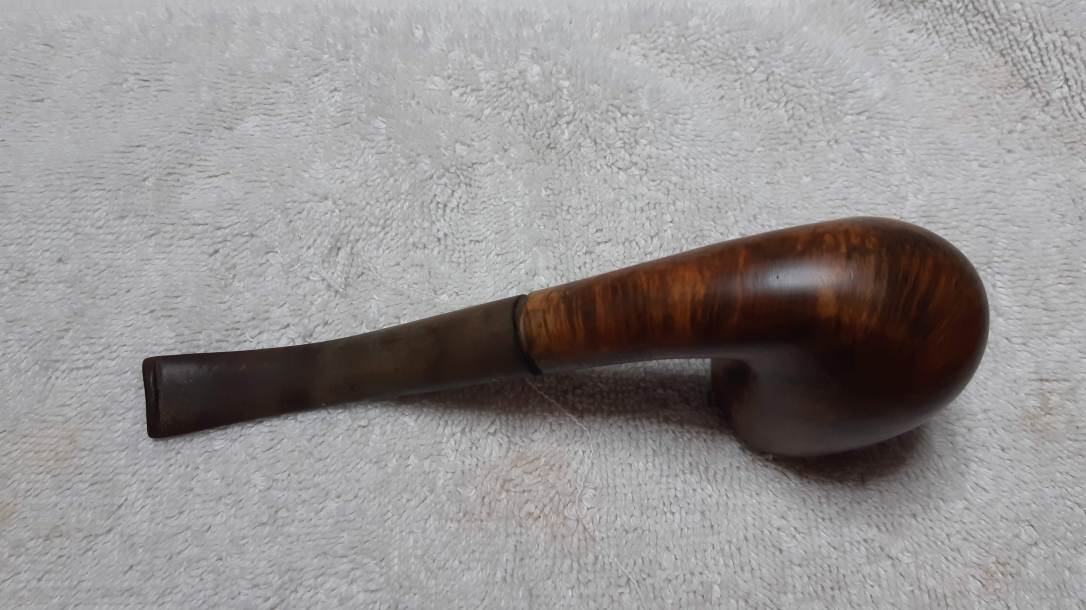 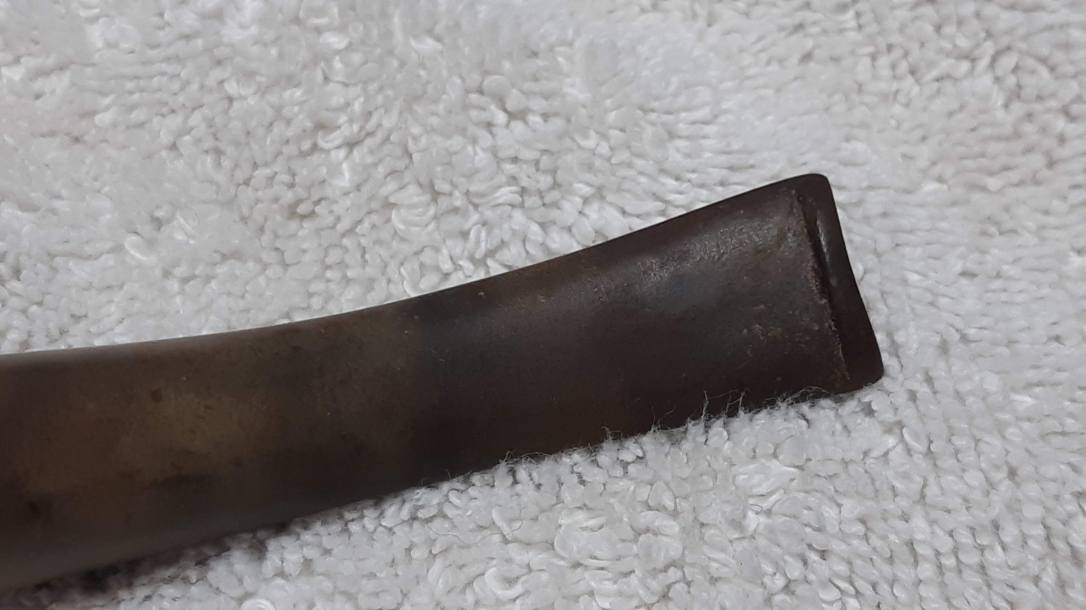 As you can see from the pics, the pipe needed a bit of spit and polish. The finish (a splotchy mosaic of black, dark brown and red dyes) was faded and grimy, the rim dented and covered in lava and the stem oxidized and somewhat chewed.

The stamps were in very good condition – crisp and easily read. The left shank is stamped “RACINE & LARAMIE” over “OLD TOWN SAN DIEGO” over “SEVILLE” over “CONVERTIBLE” over “FILTER PIPE”. The right shank was comparatively empty, stamped with “IMPORTED BRIAR” over “ITALY”.  The stem was marked with the stylized “S” of the Seville marque.

According to Pipephil.eu, Seville is a seconds brand of Mastercraft, an American company formed in 1941 and now a part of Lane Ltd. Racine & Laramie is a tobacconist established in 1868 and still operating in downtown San Diego, California, USA. There is nothing on the pipe to indicate when it was made, but based on the style of finish, I wouldn’t be surprised if it dates to the late 1980’s or early 1990’s.

My research also turned up the fact that Seville pipes were available in several versions – Regular, Filter, Convertible and Lucite. The stem on this Convertible is drilled to accept a paper filter (a la Dr Grabow); I can only surmise that it also originally came with an adapter to make it a non-filter pipe. 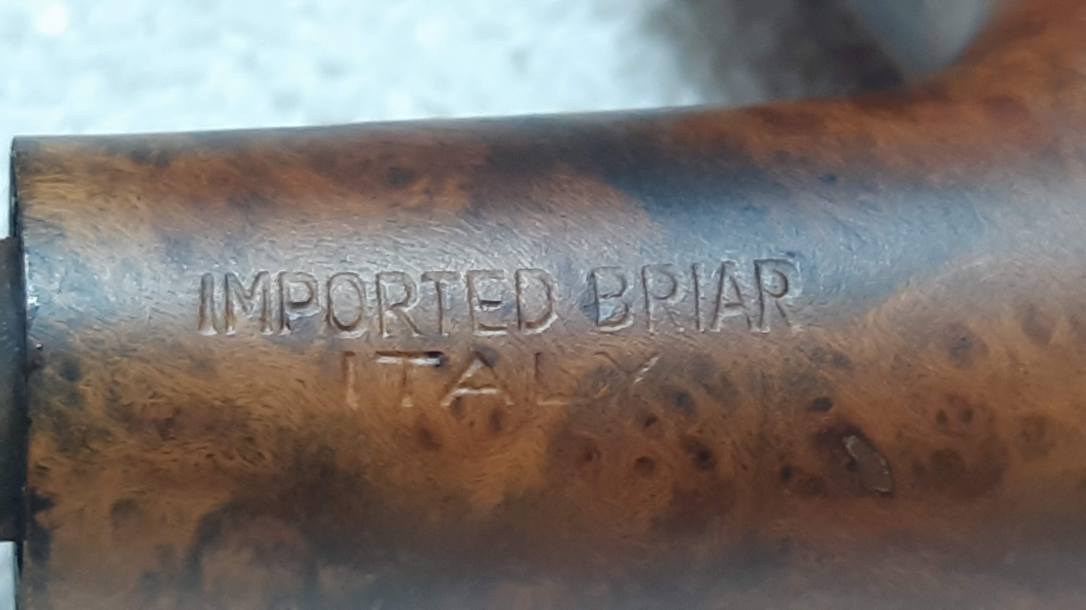 As you can see in the first shot above, a large fill on the shank had shrunk and lifted slightly. As it turned out, this was only the first of many fills I’d have to replace on this pipe before the project was finished.

I started work on the pipe by reaming the old cake from the bowl and inspecting the briar inside the chamber. Happily, the chamber walls, floor and draft hole all looked good. 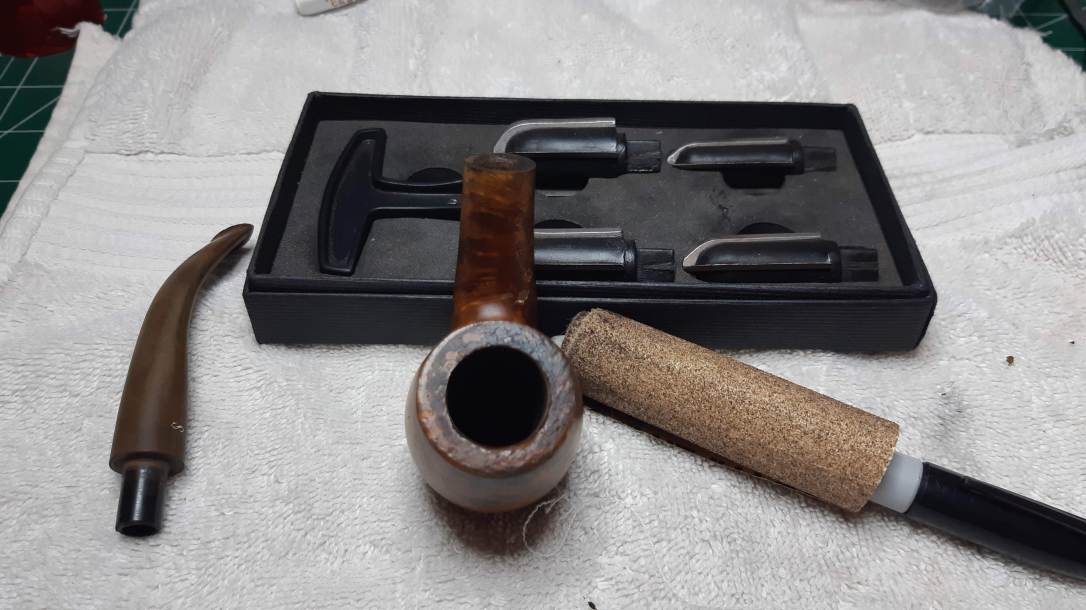 I used a flat blade to scrape the worst of the lava from the rim of the bowl, revealing a constellation of dents and dings. I topped the bowl lightly to regain a smooth, flat rim. 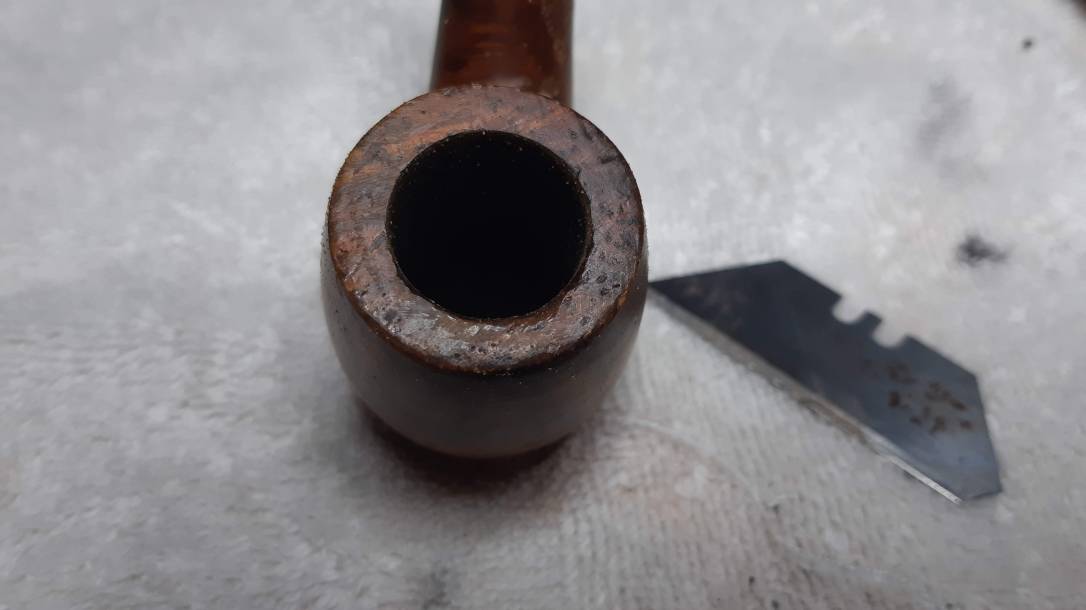 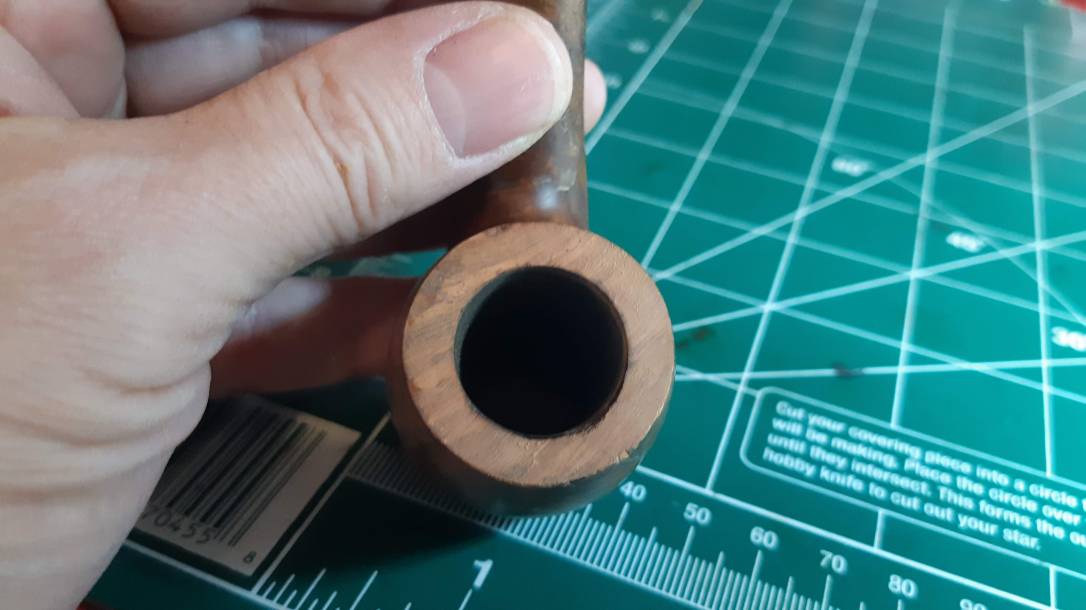 The internals of the stummel were a real mess. I used a pile of pipe cleaners, cotton swabs and lots of alcohol to soften and remove the accumulated tars and other goodies hiding inside the stummel. My flat-ended needle file came in particularly handy for scraping the muck out of the end of the mortise.

Given the amount of crud removed during this step, I set up the stummel with a salt and alcohol treatment and left it to sit overnight.

The next morning, I dropped the stem into an Oxyclean bath to raise and soften the oxidation and started work on repairing the loose fills in the stummel after dumping out the now dark brown salt.

I used a dental pick to scrape out the old putty fills and then hit each blemish with a patch mixture of CA glue and briar dust. There were a lot of fills! 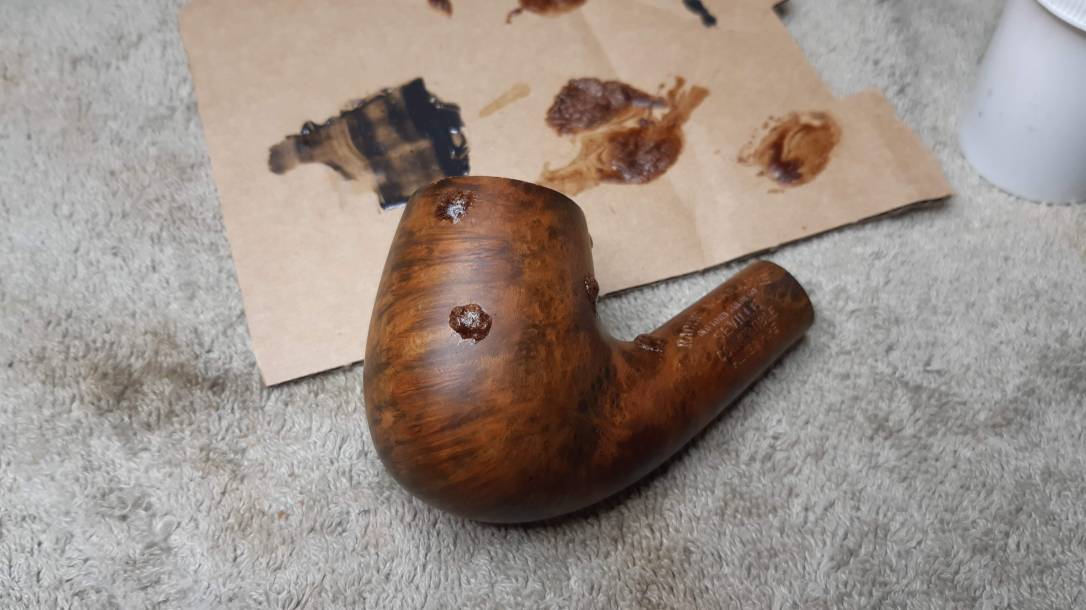 When the fills had cured, I filed and sanded them flush to the surrounding briar. Many of them needed a second round, this time with straight CA glue, to fill the tiny bubbles formed during curing. 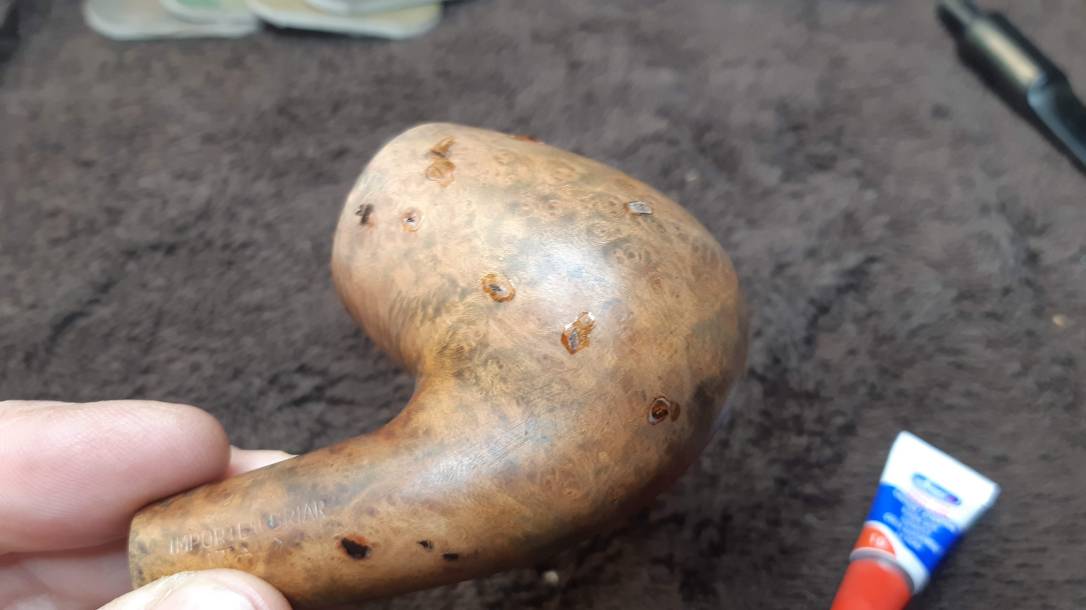 You can see from the pics above that by sanding all the fills I had basically sanded 90 percent of the old splotchy dye out of the briar. I decided to sand out the remaining 10 percent to even out the colour prior to re-staining. I wasn’t a fan of the “tie-dye” look anyway….

Setting aside the stummel for a moment, I pulled the stem from the Oxy bath and scrubbed it clean with 0000 steel wool and Magic Eraser. A handful of pipe cleaners dipped in alcohol sorted the stem’s internals.

Unfortunately, I hadn’t been paying attention when I dropped the stem into the bath. What I had thought to be a stamped and filled logo turned out to be a thermofoil type marking, and I lost part of the “S” to the soak.  I should have applied a dab of vaseline over the logo to protect it. Whoops!

I continued with the stem work by drop-filling the tooth dents with CA glue mixed with charcoal powder. I used needle files and sandpaper to cut and shape a new upper button after the patch had cured, wet-sanding the stem to 2000 grit to smooth out the sanding marks. 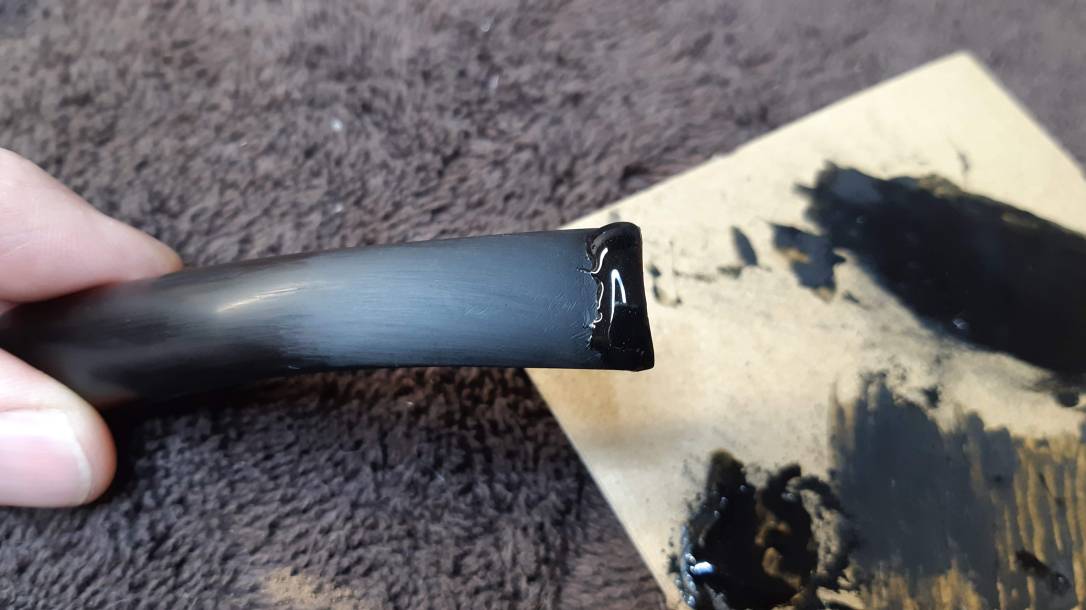 The stummel needed a good final sanding and polishing before I applied the new stain finish. A full course of micromesh pads erased the last of the sanding marks and brought up the shine.

I hit the prepared briar with a coat of Fiebing’s Black leather dye to begin the staining process. I let the stain dry before scrubbing most of it off the briar, leaving it only in the softer grain.

A top coat of Fiebing’s Saddle Tan dye went on next, adding tones of red and brown to the mix while allowing the black to shine through.

When the second stain coat had dried, I hand-buffed the stummel with an old towel to remove the excess dye and applied a light coat of mineral oil to refresh the stummel and give the finish depth and pop.  I let the oil sit on the briar for a few minutes before buffing off the excess with a cloth.

Then it was off to the buffer where the entire pipe was polished with White Diamond compound before receiving several coats of Carnauba wax to shine and protect the new finish.

Although I accidentally damaged the stem logo, this Seville bent billiard is now miles ahead of where it started, both cosmetically and functionally. The mass of old tars and smelly gunk are gone, the briar is fresh and the new contrast stain came out really nicely (despite the myriad fills both large and small) and in my opinion looks much better than the splotchy mess that was there when I started. The refreshed stem fits snugly in the now clean mortise, and the chatter and dent-free bit is ready for a new piper.

This restoration was quite a bit of work, but I think the results speak for themselves. It’s a lovely piece, with good grain despite the fills, which for the most part fade into the contrast finish nicely. This pipe is up for grabs; if you’re looking for an affordable, freshly refurbished Bent Billiard, you’ll find this one on my Pipe Inventory page now.

Thanks for joining me for another estate pipe restoration. Until next time, Happy Piping! 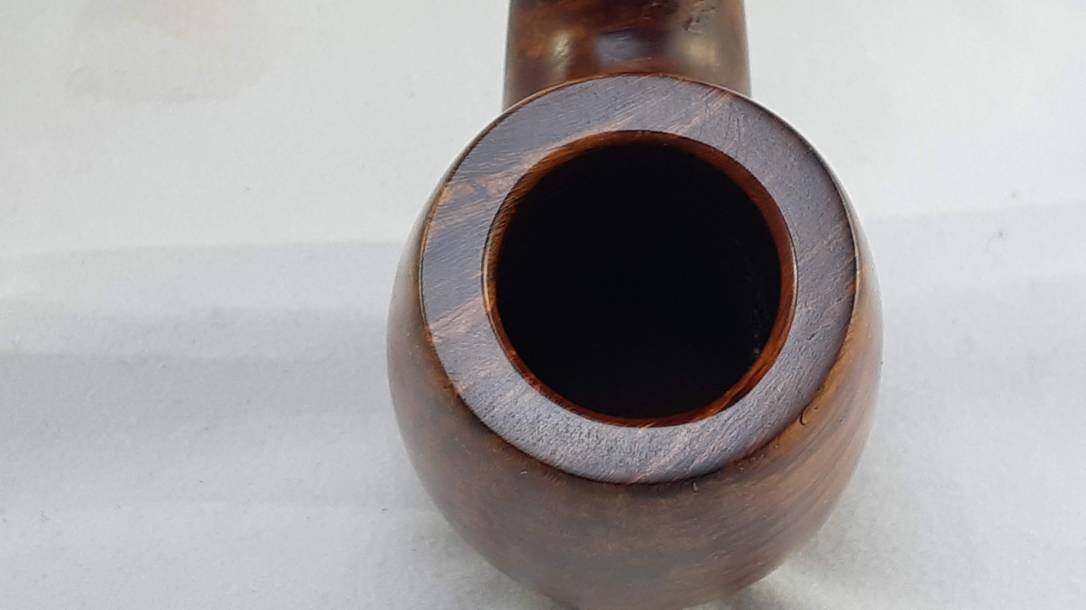 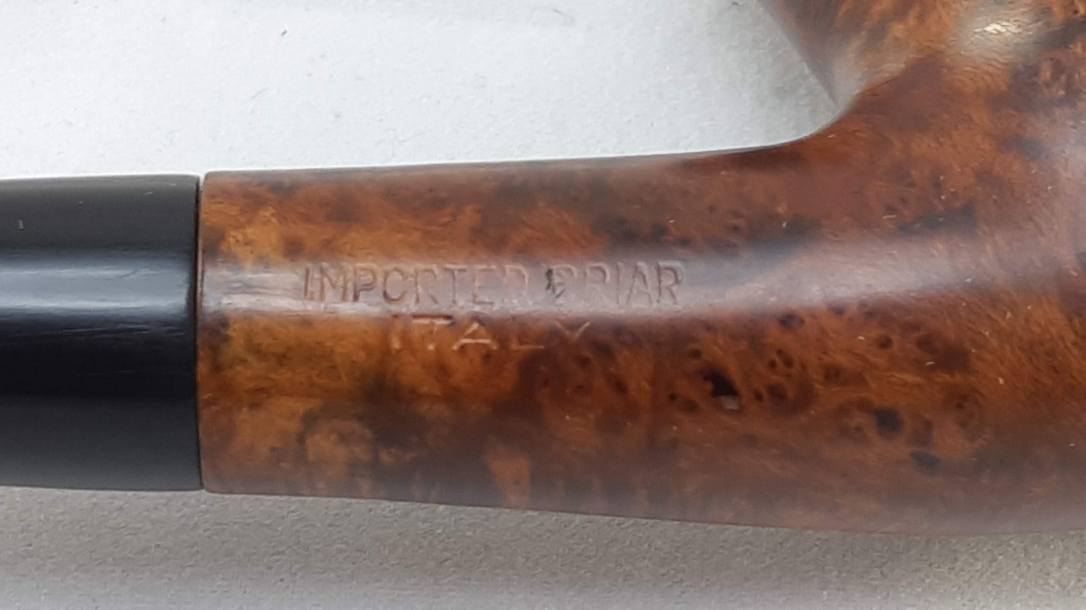 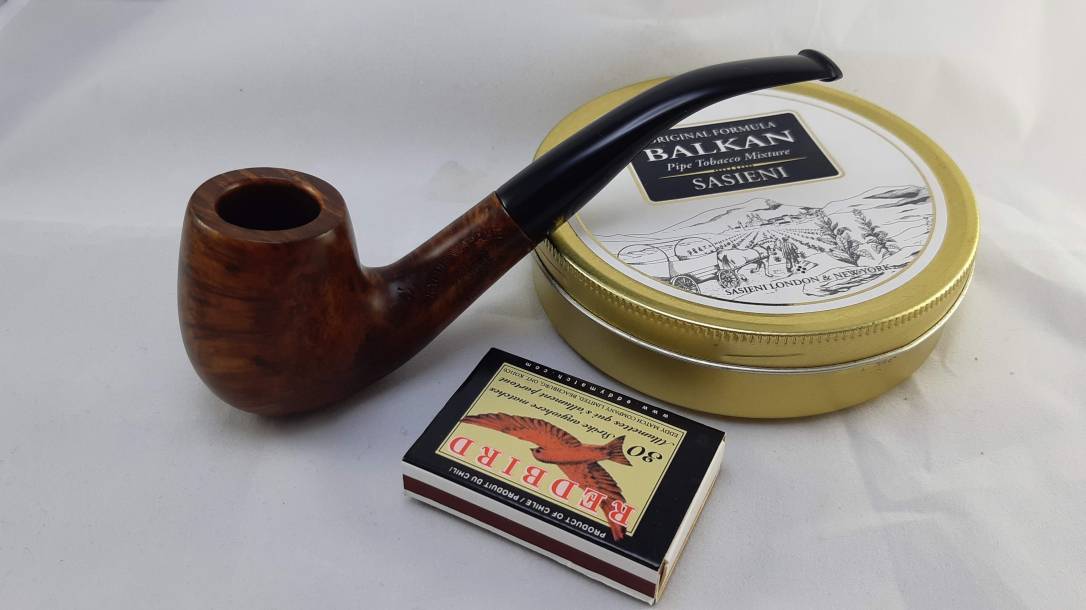