I was recently sent another batch of Blatter estate pipes from a forum friend in Iqaluit, Nunavut. This large Rustic Ball pipe is the first of that lot to be tackled. I decided to start with an easy one this time.

The pipe was in very good estate condition when it arrived on my worktable. It needed a good cleaning, of course, but apart from years of dust, the only real issues were a crust of lava stuck in the deep rustication of the rim, a bit of oxidation to the stem, and a few deep tooth dents. The stem was really tight in the mortise, and once removed wouldn’t seat completely again. A good cleaning should sort that out. 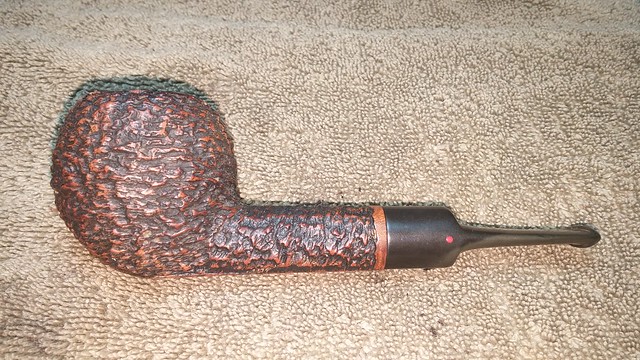 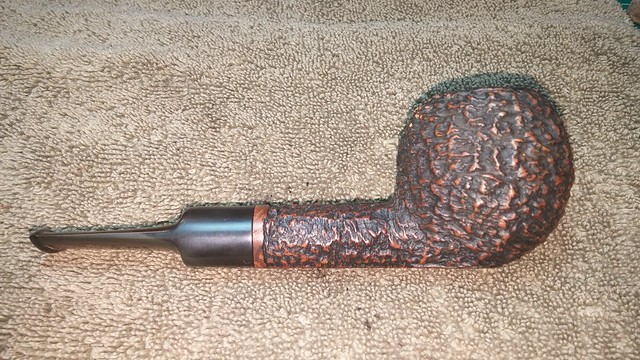 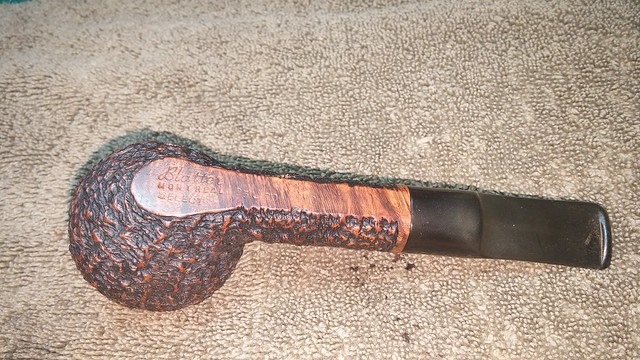 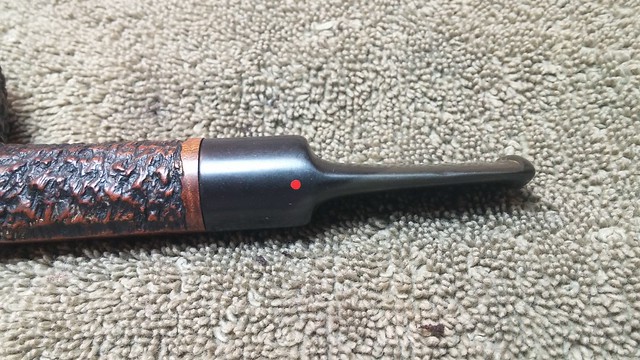 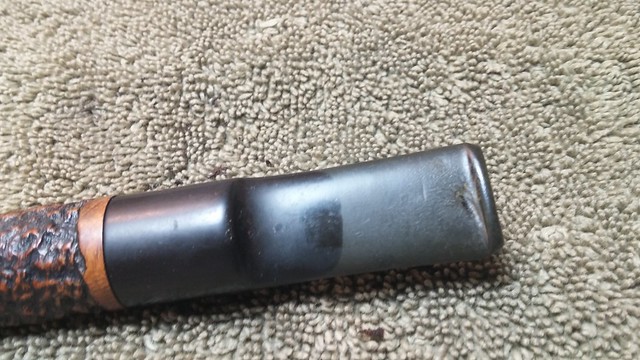 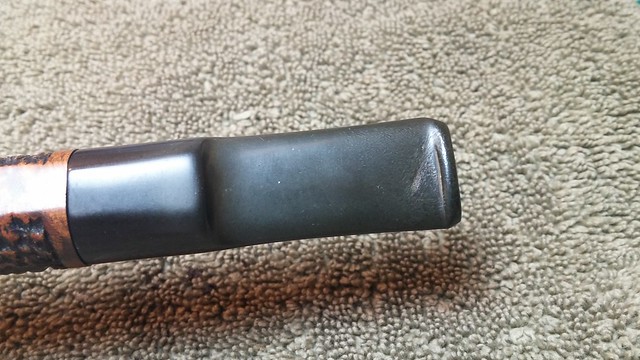 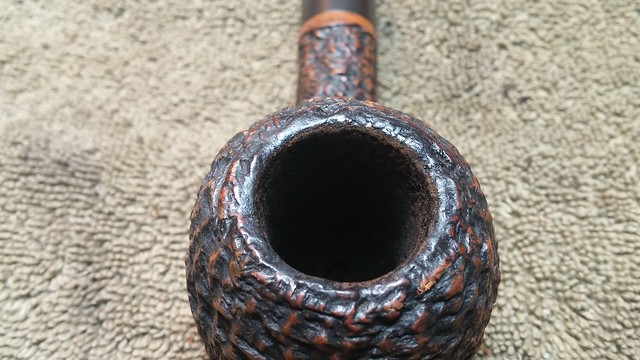 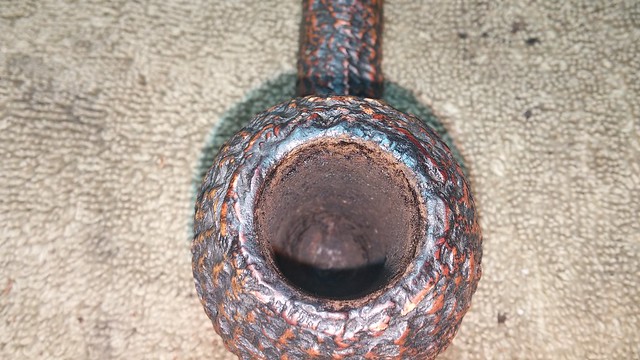 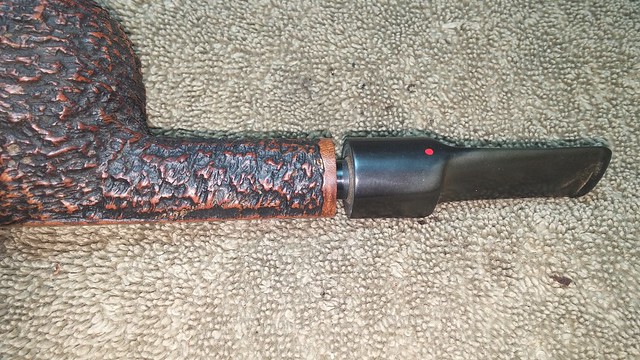 The smooth underside of the pipe is stamped “Blatter” over “Montreal” over “Select”, followed by “23-80” and “1C”. This shows that this large Ball pipe is a Select grade pipe, a step up from a Blatter entry level pipe (which is still a very good pipe). If I’m not mistaken, 23-80 indicates the 23rd pipe made in 1980. 1C is presumably a shape number. 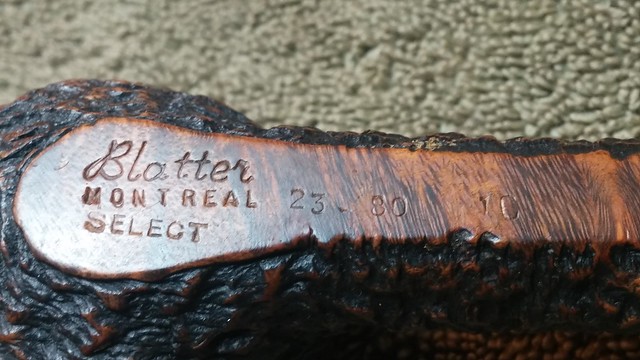 I started the cleanup by attempting to pass a pipe cleaner through the stem. I say “attempted” because at first I was unsuccessful. Those tooth dents were deeper than I had first suspected, effectively crushing the airway closed. The original piper must have had bionic jaws!

To open the airway, I heated the bit over a lighter flame, “painting” the flame across the vulcanite, top and bottom, until the rubber was pliable. A pipe cleaner pushed through from the tenon end of the stem repositioned the crushed vulcanite, restoring air flow. This little procedure actually helped with the dents on the outside too, pushing them up from the bottom, leaving me with shallower pits to deal with later. 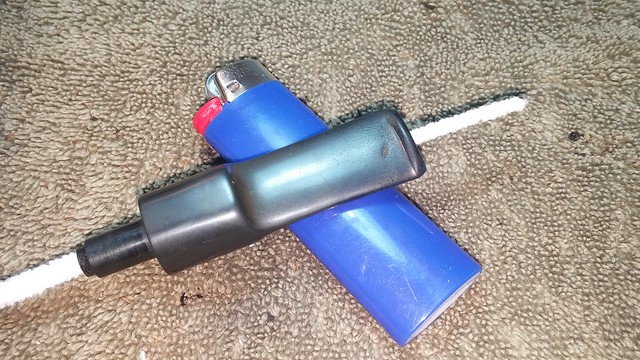 I popped the stem into a bath of Oxyclean and warm water, and turned my attention to the stummel.

I started by clearing out the built-up crud from the shank using a drill bit slightly smaller than the mortise and turned by hand. I wanted to scrape the hardened tars out without enlarging the mortise bore and negatively affecting the stem fit. This pic shows the chunks of tar that came out of the mortise. Yum! After the hand drilling, a few pipe cleaners dipped in alcohol took care of the remnants. 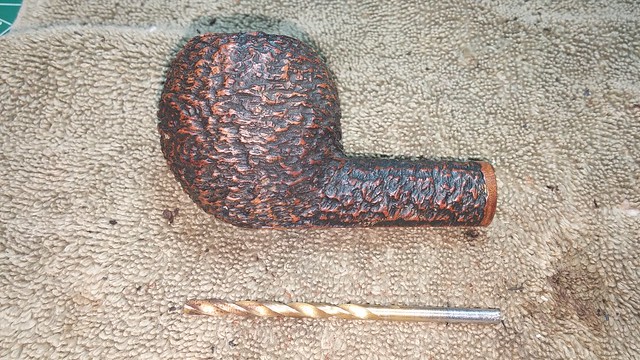 The tobacco chamber wasn’t heavily caked. I removed what there was with some coarse sandpaper wrapped around a Sharpie marker. The lava lurking in the rustication came away with a good scrub with a brass bristle tire brush. 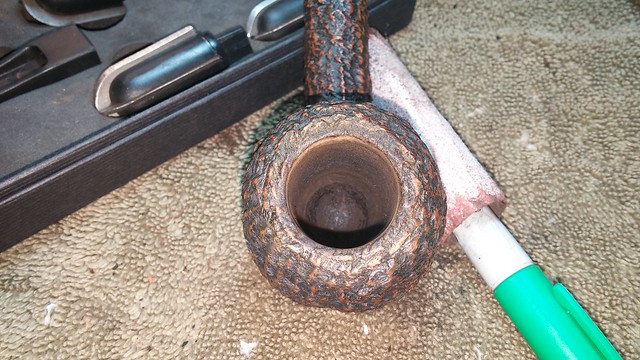 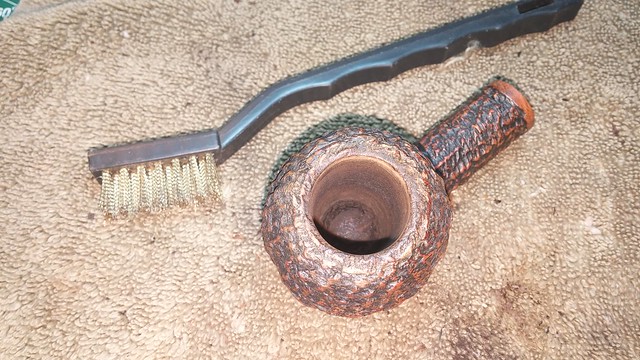 It was getting late, so I set up the stummel with an overnight salt and alcohol treatment, which is essentially a deep cleaning and deodorizing process. With a twist of cotton in the shank and a bowl full of kosher salt, I filled the pipe with 99% isopropyl alcohol and let it sit. The alcohol dissolves the tars and other contaminants inside the stummel, which are then absorbed by the cotton and salt. 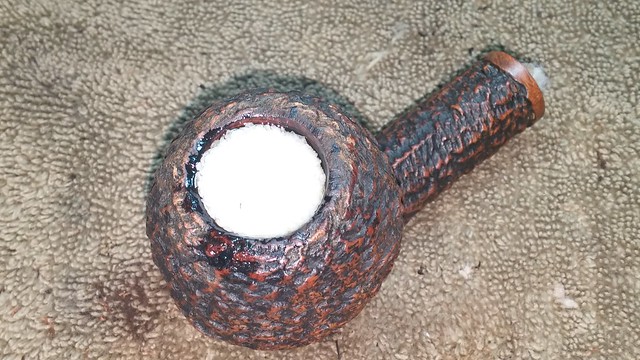 The next day I dumped out the salt, removed the cotton from the shank and ran a pipe cleaner through the stummel’s airway to remove any stray salt crystals. The chamber smelled of clean briar, but the exterior of the pipe was still dirty. A scrub with Murphy’s Oil Soap and a toothbrush lifted the dirt and grime from the deep rustication. 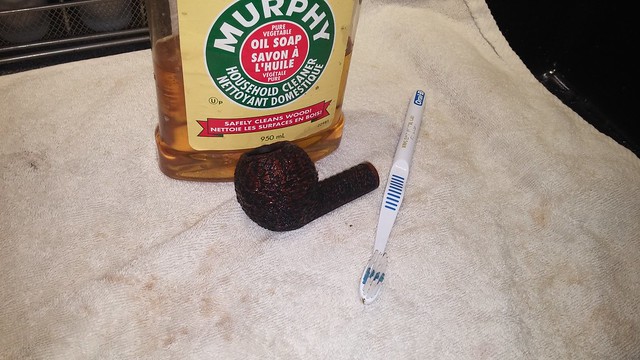 I set the stummel aside to rest and pulled the stem from its Oxyclean bath. The soak had raised the oxidation to the surface of the vulcanite where it was easily scrubbed away with 0000 steel wool and Magic Eraser. A few pipe cleaners dipped in alcohol made short work of the softened tars and debris in the stem’s airway. 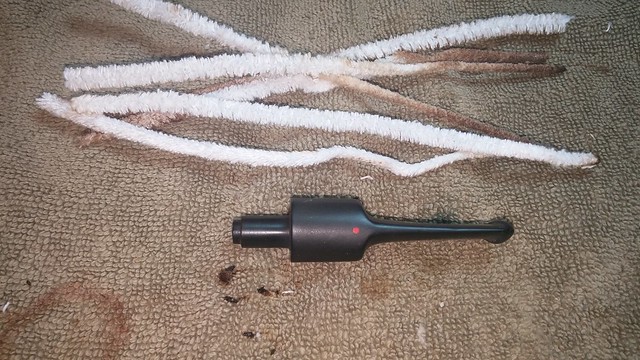 Opening up the airway at the beginning of this restoration had raised the tooth dents nicely; there was just a bit of work to do with various grades of sandpaper to smooth out the remaining marks. I worked through 220 and 320 grit dry papers, then 0000 steel wool, before finishing up with micromesh sanding pads in 2400 – 12000 grits. The result is a nice smooth stem, with a deep black shine. 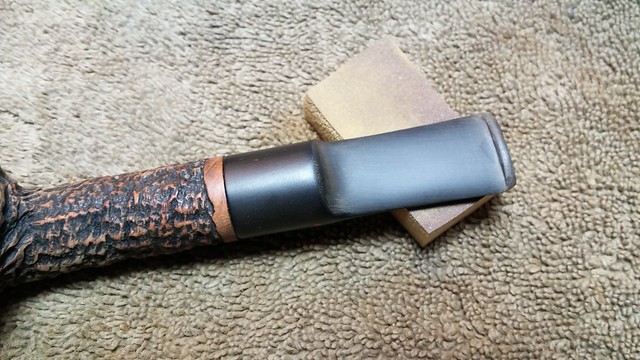 Before final buffing on the wheel, I refreshed the briar’s finish with a wash coat made from Fiebing’s Saddle Tan and Brown leather dyes. 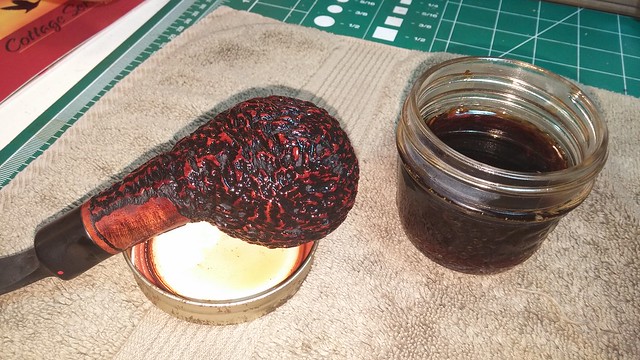 A run of White Diamond compound, light on the stummel and heavier on the stem, buffed out the last of the sanding scratches and a few lights coats of Carnauba wax brought up the shine. This 37-year old Blatter Ball ready to provide years of loyal service to its new piper in Canada’s North.

Thanks for joining me for this quick cleanup. More Blatter pipes to come as I work through the remaining pipes in this lot! 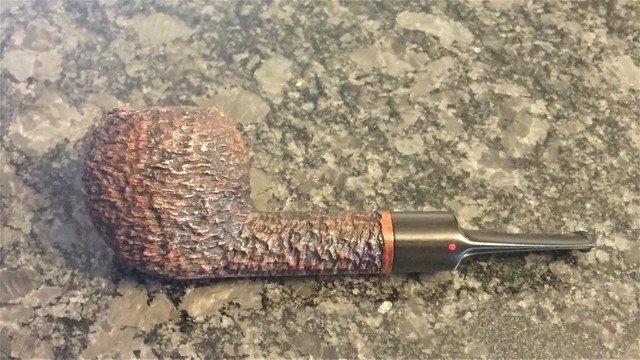 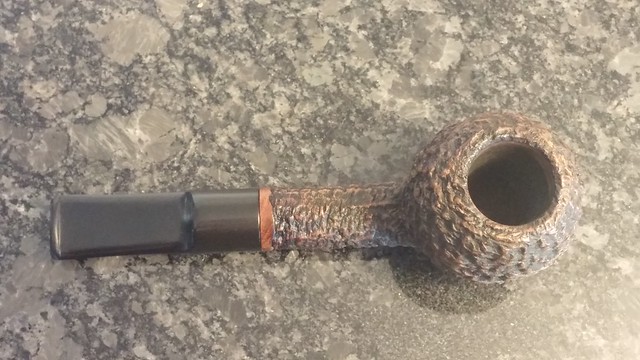 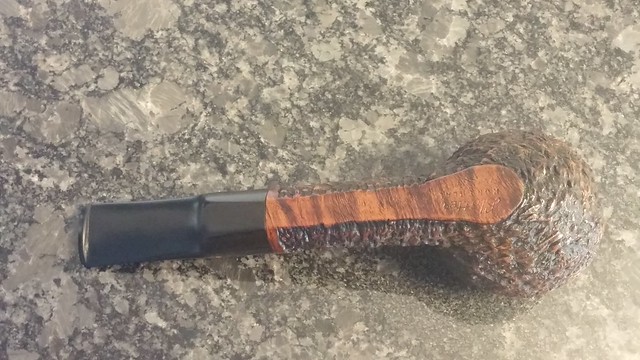 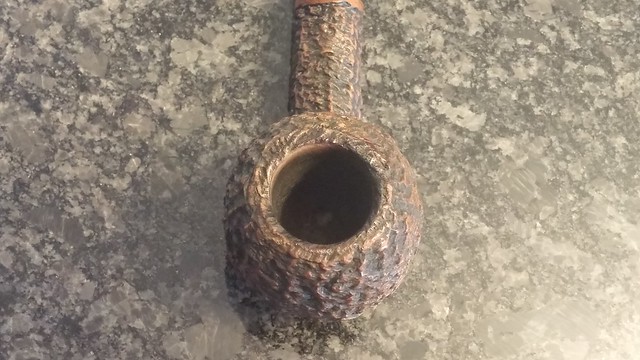 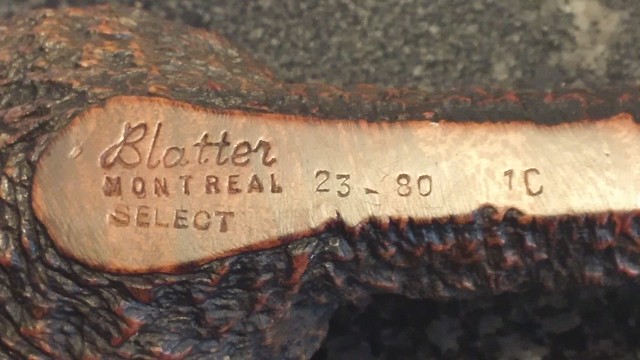 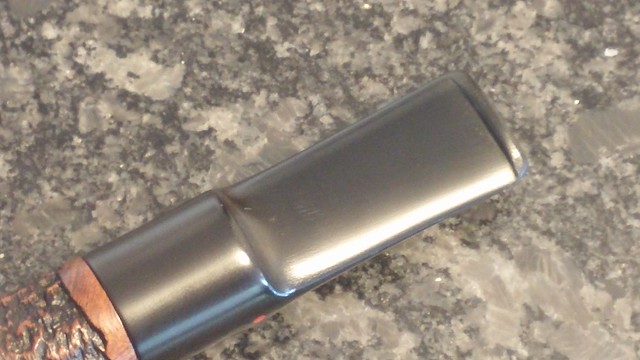 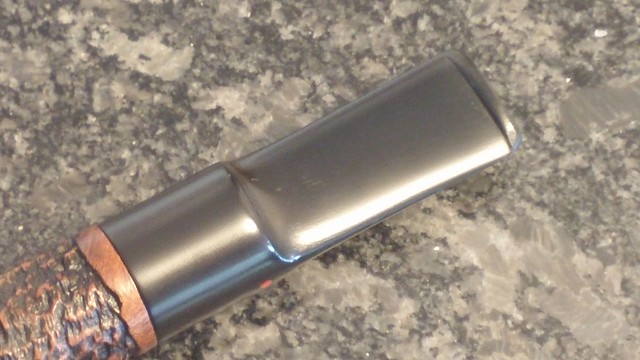 5 thoughts on “Tidying Up a Large Blatter Select Rustic Ball”