These two Brigham Sportsman pipes are the 4th and 5th of the seven Brigham pipes I purchased as a lot back before Christmas.

For those unfamiliar with this series, the Sportsman pipes were roughly shaped, semi-finished and sold each year at the Toronto Sportsman’s Show as rugged, rough-and-ready pipes suitable for bringing along to the cottage, hunt camp, fishing lodge or campground. The briar blocks were factory drilled, had the top half or so of the bowl machine-turned, and were fitted with a stem containing the Brigham filter system. The bottom half of the bowl and the shank were left roughly carved. Many of the Sportsman pipes were graded at a 3 Dot level, though I believe they were available in 3, 4 and 5 Dot grades.

Based on the number of vintage Sportsman pipes I’ve come across that are still in their rough-carved form, it’s clear that many pipers left them as they bought them, though others would make the pipes their own by further shaping and smoothing out the rough-cut profiles. This pair of Sportsman pipes, hailing from the 1980s, were still sporting their rugged rough-cut looks, but had been stained by the previous owner, one black, the other a reddish brown. Curiously, after putting the effort into personalizing the pipes, the owner left them unsmoked. 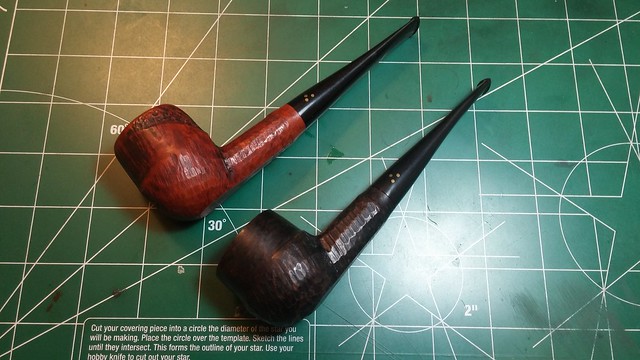 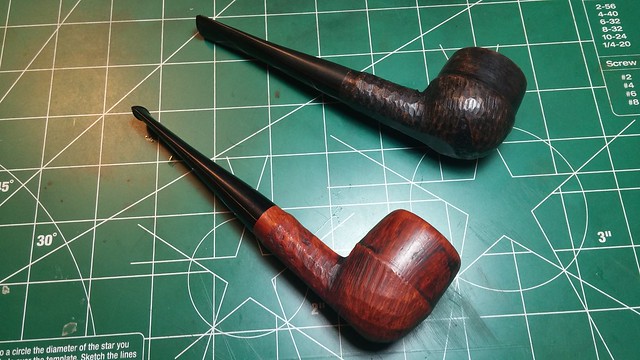 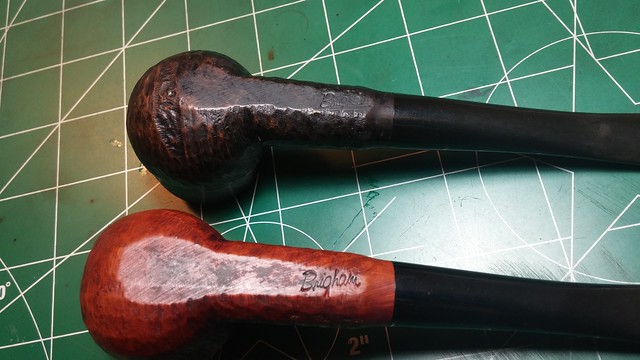 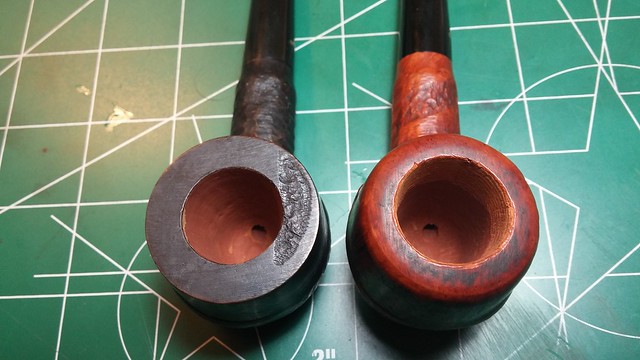 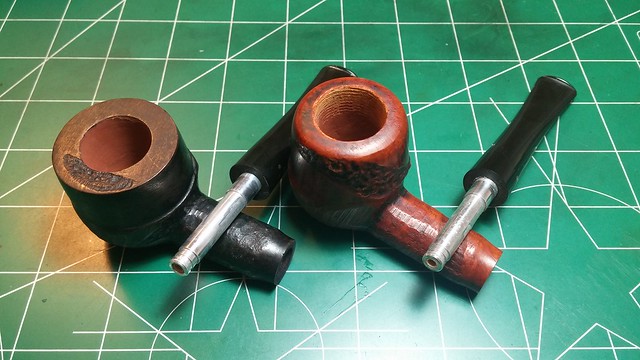 The stummels are both stamped simply “Brigham” on the underside. There are no shape numbers, though the black pipe is clearly a Shape 14 Pot, while the red pipe is a Billiard, probably a Shape 03, judging by the rounded rim.

Someone had made a half-hearted attempt to sand the factory bowl coating out of the red pipe’s chamber, marring the top and inner edge of the rim in the process, but otherwise the pipes were in excellent estate condition. The stems were grimy but not oxidized, and free of tooth marks. The stummels were also dirty and felt a bit greasy in the hand, but were otherwise in great condition. 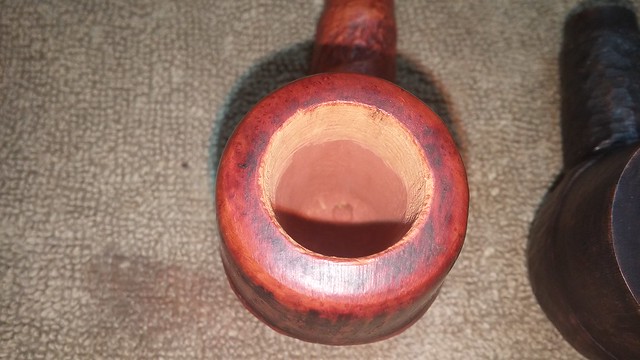 I used a scrap of worn 220-grit sandpaper to smooth out the coarse sanding marks inside the Billiard’s bowl. I cleaned up the rim gouges while I was at it. 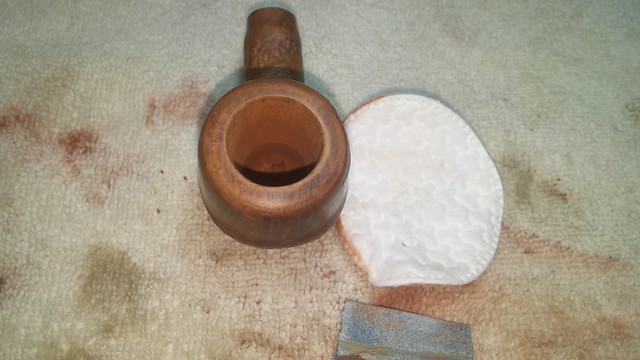 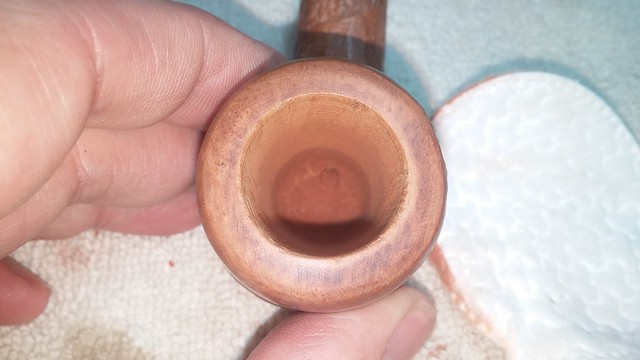 I decided to try to remove or at least lighten the DIY stain on the stummels. The stain on the Pot shaped pipe looked ok but completely hid the briar grain underneath. The poor attempt at a contrast red/brown stain on the Billiard shaped pipe was more transparent, but the brown areas were crude, blotchy and unattractive. I dropped both stummels into an alcohol bath to see if I could dissolve the finish. 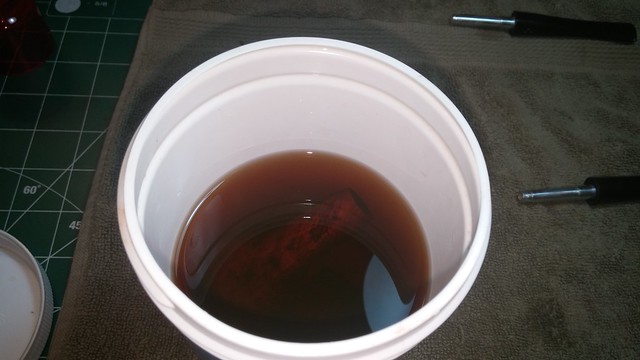 While the stummels soaked, I cleaned up the stems. As they were unsmoked and not oxidized, a quick wipe-down with alcohol on a cotton pad sufficed to remove the grease and dirt.

I checked on the progress of the stummels several times during their soak. The results after 12 hours in the alcohol were only partially successful. The alcohol had dissolved the greasy layer of dirt from the surface of the briar, and the black stain on the Pot had lightened enough to allow the grain underneath to show through.

The Billiard had fared only slightly better. The red stain remained but the worst of the brown splotches had disappeared. Overall, though, this was about the best I had expected to achieve, and I was pleased with the much more natural look of both stummels.

The alcohol soak had had one negative effect – it had softened several factory putty fills hidden in the rusticated areas on both stummels, which now showed as pink patches on each pipe. I was able to blend the fills into the finishes with a combination of black Sharpie marker and stain pens. 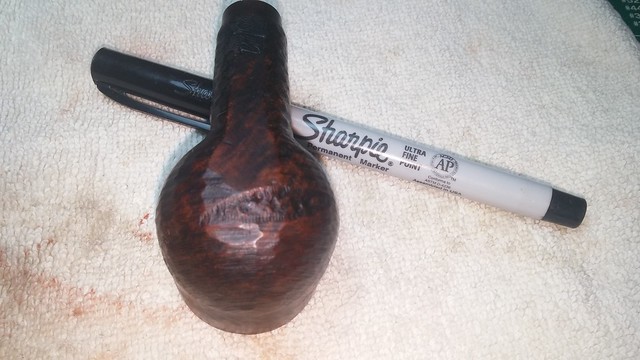 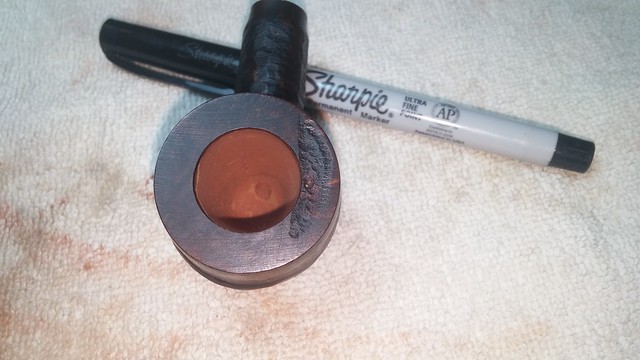 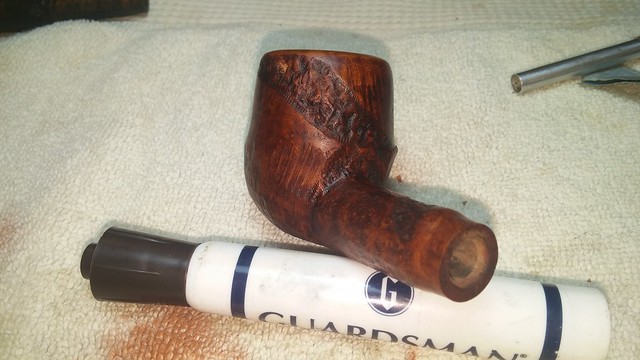 One larger fill on the Billiard pipe had fallen out completely, so I mixed up a small amount of CA glue and briar dust and packed the patch material into the flaw. When the CA had cured, I used needle files and sandpaper to remove the excess material and blend the new fill into the rustication. 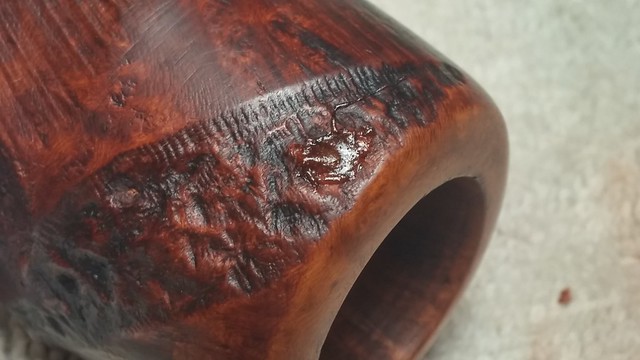 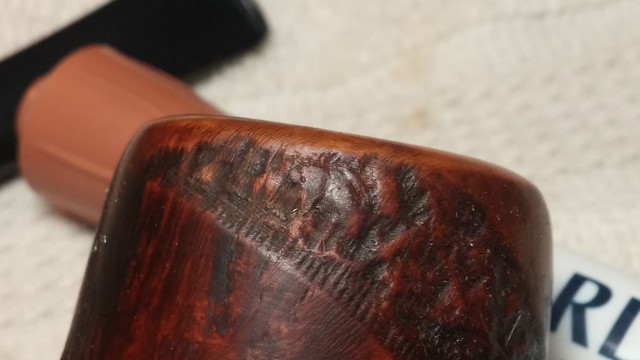 As both pipes were essentially New, Old Stock (NOS), there was no internal cleaning necessary, so I brought both stummels and stems to the buffer for a quick polishing with white diamond compound and several coats of Carnauba wax. I focused on applying wax mainly to the stems, with only a very light application to the stummels, and then really only on the smooth areas of the pipes. I wanted to retain the rough-carved look of the Sportsman series while providing a modicum of protection for the stained finishes.

I have several raw briar Sportsman pipes in my collection already, so I’ll be listing this pair for sale in the DadsPipes Store. They are a fun part of Brigham history, and more to the point, I think they should be used for their originally intended purpose by new owners. One or both of these 1980s era Brigham Sportsman pipes would make a great addition to your tackle box or hunting vest, or leave them at the cottage, camper or shop so they’re ready when you arrive.

Thanks for walking through this quick refurbishment with me. Until next time, Happy Piping!

Here are the finished pipes. 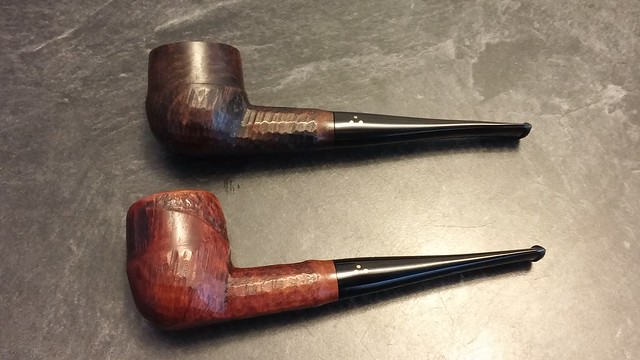 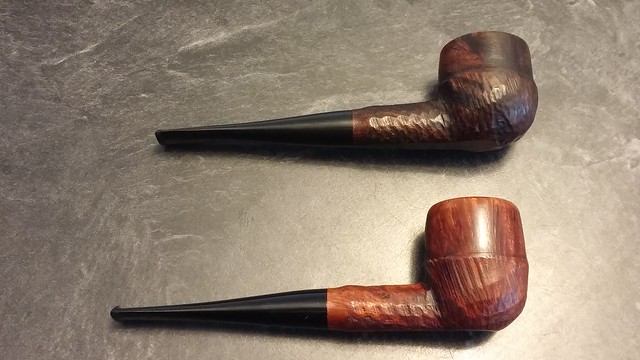 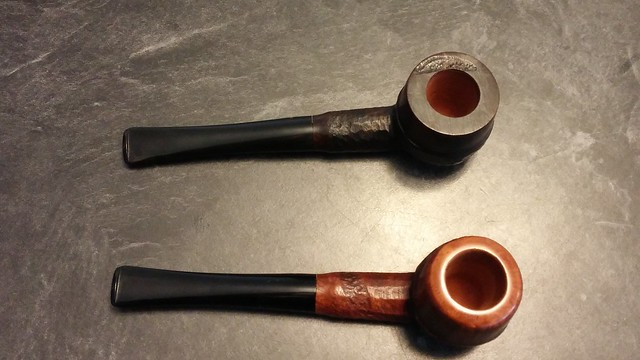 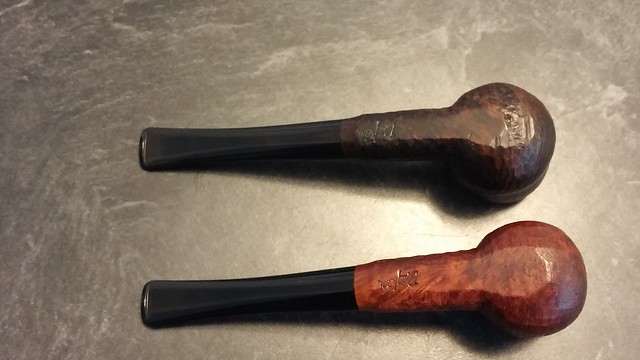 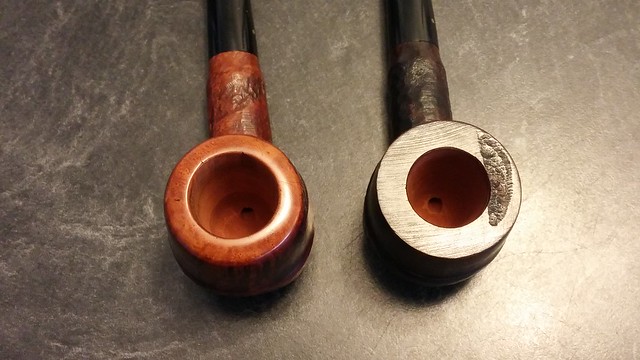 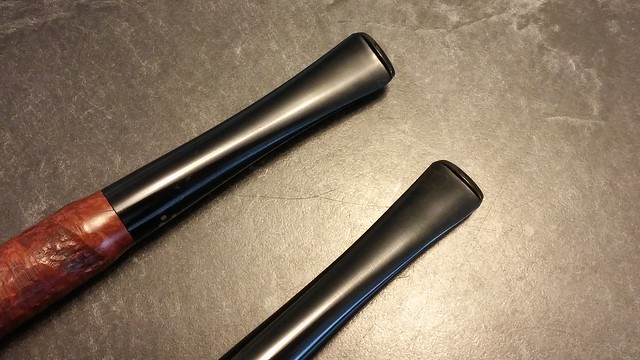 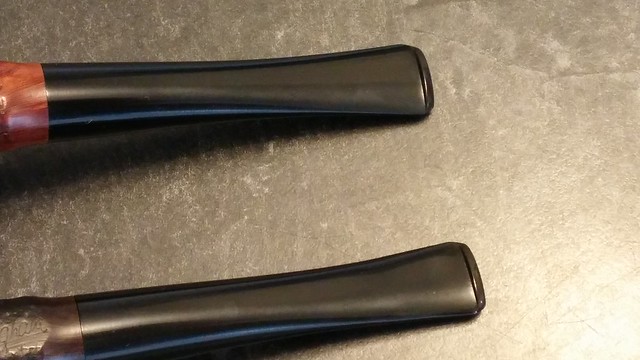 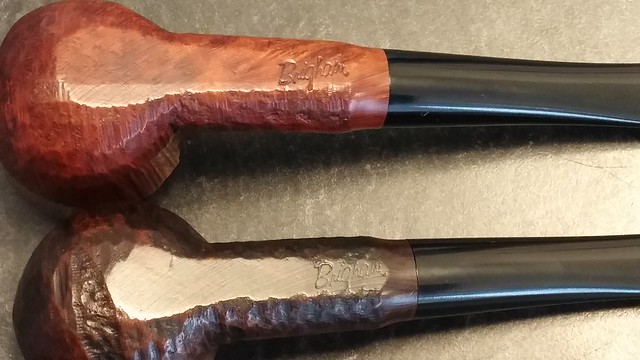 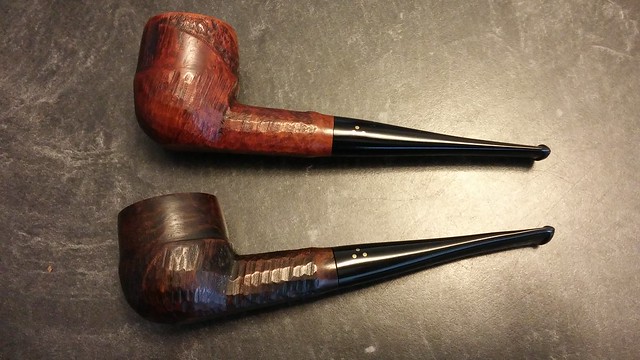