This Georg Jensen Goodwill freehand is another of my holiday acquisitions. Truthfully, I bought this one on spec because I liked the lines of the pipe and the grain in this piece of briar. I knew nothing of Georg Jensen pipes, and after a look through my usual online source, I know very little more.

According to Pipedia.org, Per Georg Jensen founded the Georg Jensen company in 1954. The firm produced some 2000 pipes annually before closing its doors in 2001 when Per Georg Jensen Jr became “Tobacco Professor” for MacBaren Tobacco.  Pipedia also has a short list of pipe lines and markings, though, frustratingly, none quite match up with the markings on the pipe in front of me. Turning to Pipephil.eu, I ran into similar confusion. That site lists the Goodwill marque as a brand of Georg Jensen, but again the stamps are slightly different.

So the upshot here is that I’m not exactly sure when this pipe was made or where it falls on the Jensen quality spectrum. If anyone out there can fill me in, I’d certainly appreciate it.

What I do know is that this is a New Old Stock, unsmoked Danish pipe with some lovely grain. Jensen obviously knew how to capitalize on the natural beauty of briar. Though it arrived dirty and a bit greasy, the 360-degree Flame grain around the bowl and Birdseye on the crowned rim stood out immediately. The stem fit snugly against the shank and was free of blemishes and oxidation. 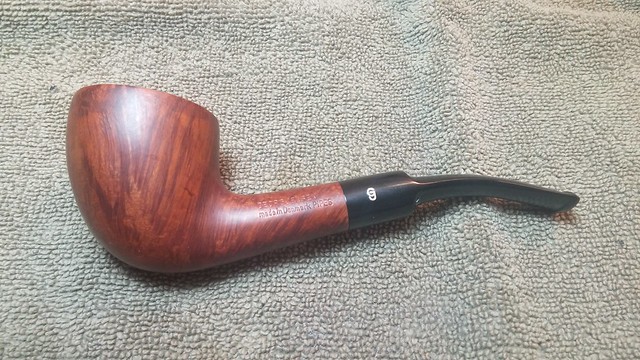 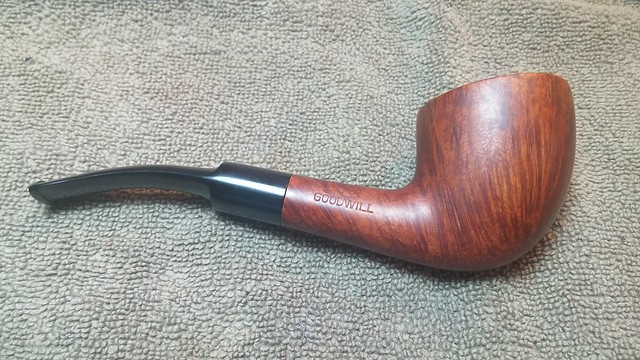 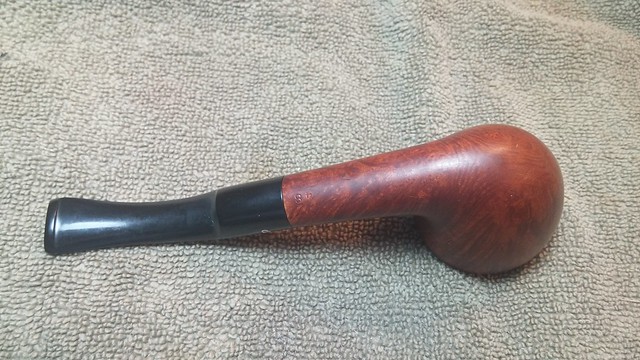 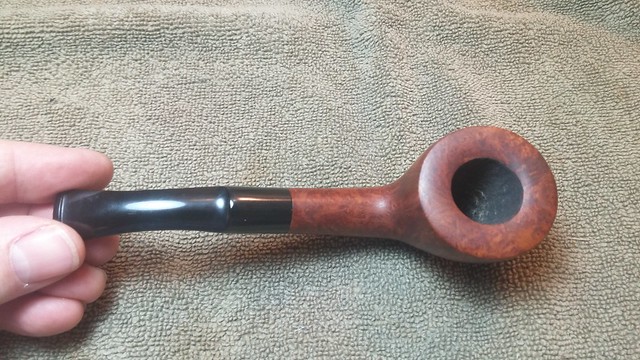 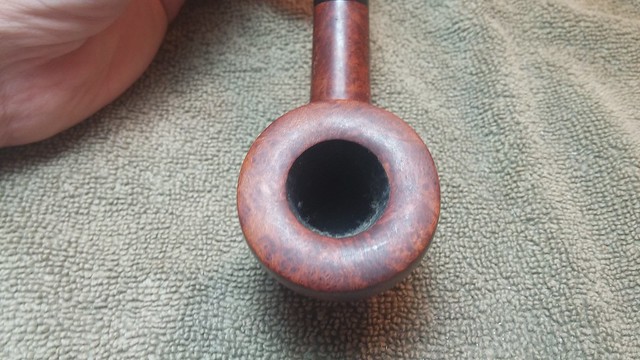 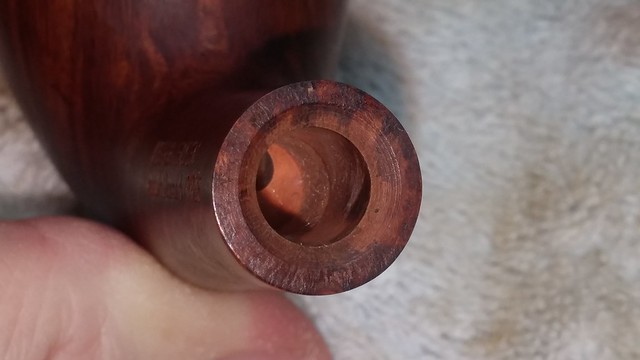 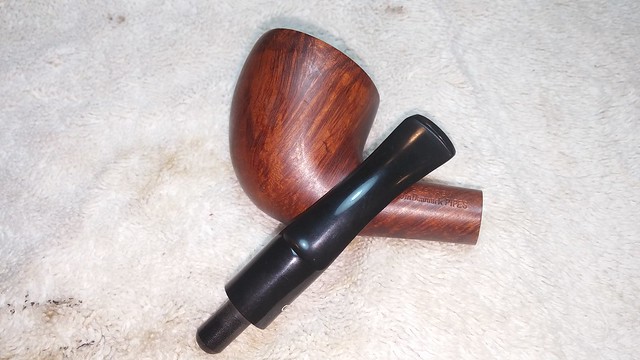 The pipe is stamped on the left shank with “GEORG JENSEN” over “made in Denmark PIPES”. The right shank is stamped “GOODWILL”. and the shape number “48” is marked on the underside of the shank near the stem. 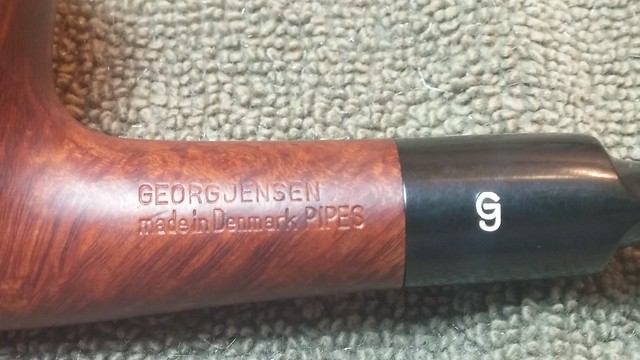 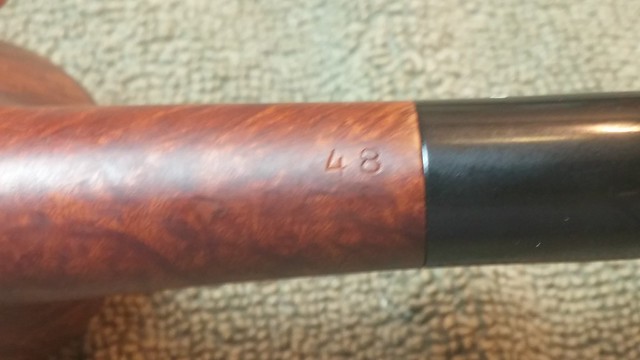 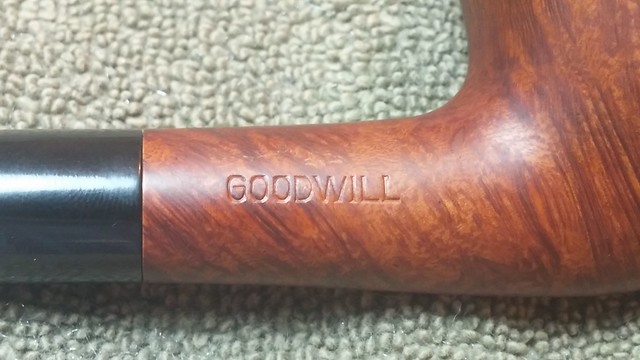 A bit more on the stamps – the two-line marks “Georg Jensen made in Denmark Pipes” seems to be the standard stamp for Jensen pipes of all grades. According to Pipedia, the pipe should also carry a model stamp and a shape number. The intertwined “GJ” stem logo on regular factory pipes was stamped in red on the left side of the stem, while special edition pipes carried a white stem logo.

As you can see, the pipe in question today has a white stem logo; however, Pipephil.eu seems to indicate that the Goodwill pipe was a sub-brand of Georg Jensen. As the company has been defunct for 16 years, it’s not possible to get an answer from the horse’s mouth, so I’m left scratching my head on this one.

Anyway, on to the very minimal cleanup this unsmoked pipe required!

I ran an alcohol-dipped pipe cleaner through the stem to clear out any dust or debris that may have collected there, and repeated the exercise with the stummel. Both cleaners came out white; in fact I spent more time picking pipe cleaner lint off the bowl coating. 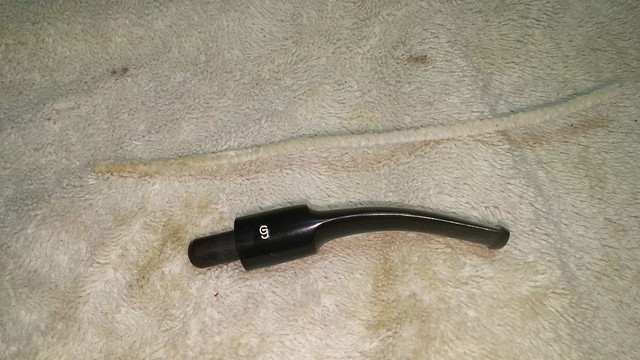 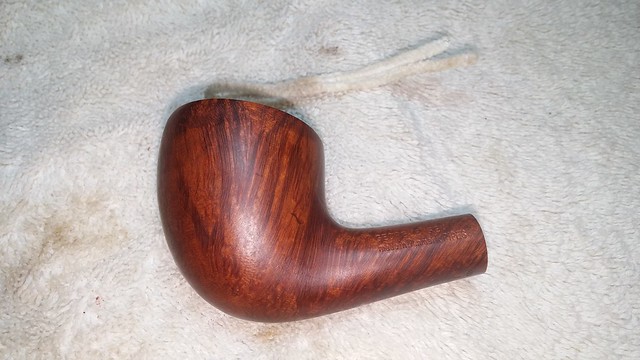 Killing two birds with one stone, I cleaned and refreshed the exterior of the pipe, stummel and stem, with a cotton pad dipped in mineral oil. This really gave the grain some depth and pop! 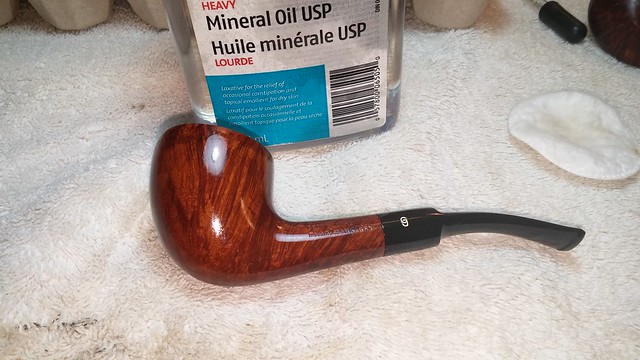 A light buffing with White Diamond compound and several coats of Carnauba wax finished off this simple refurbishment. An easy cleanup was a welcome change after two recent stem rebuilds!

This handsome Dublin-esque Georg Jensen Danish Freehand is ready to finally find its forever home after languishing in retail limbo for years. If you’d like to add this Goodwill to your rack, you’ll find it on the DadsPipes Store now. 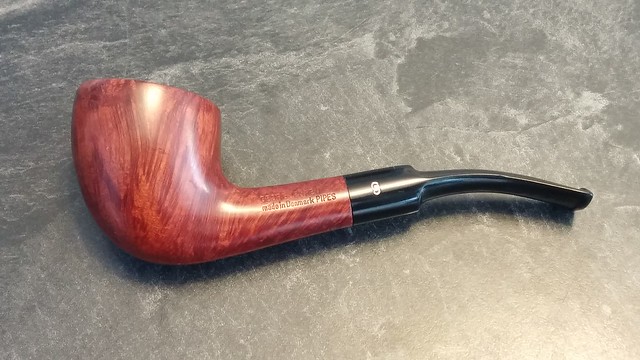 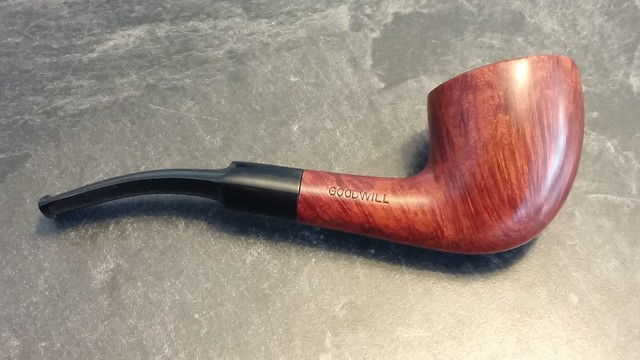 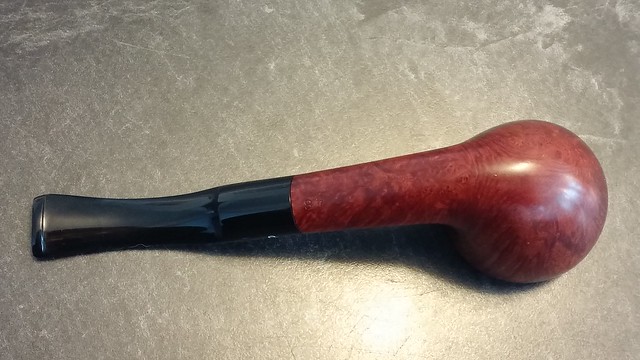 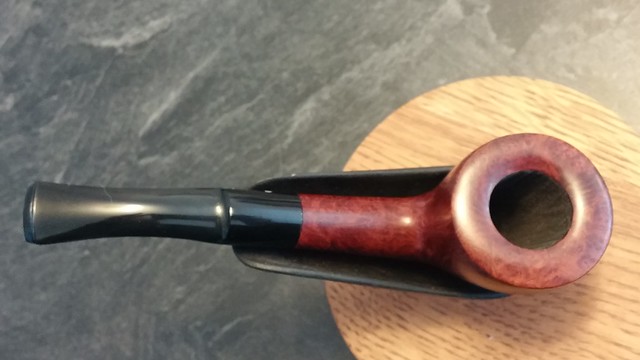 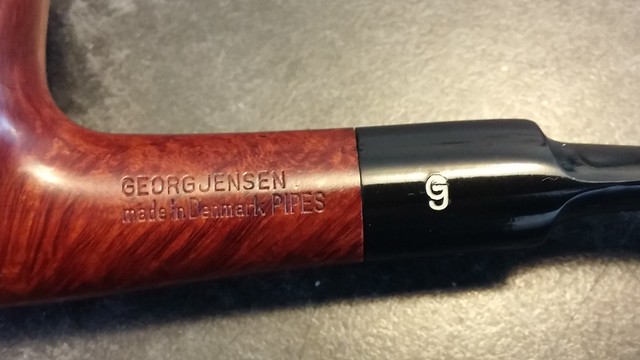 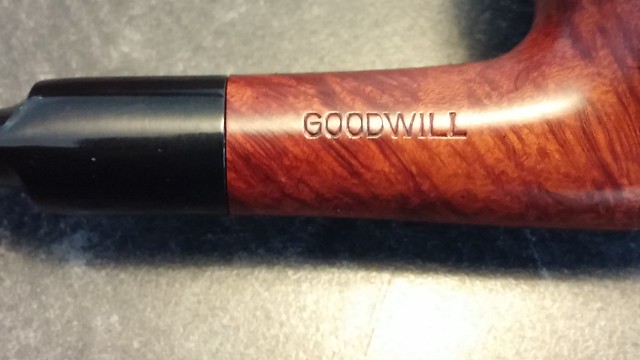 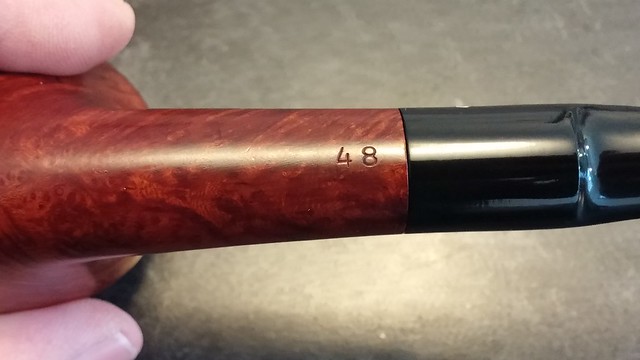 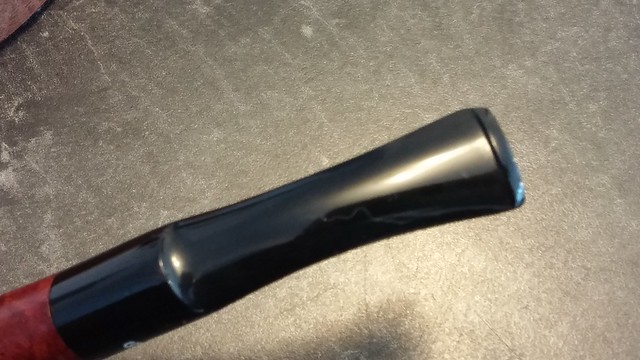 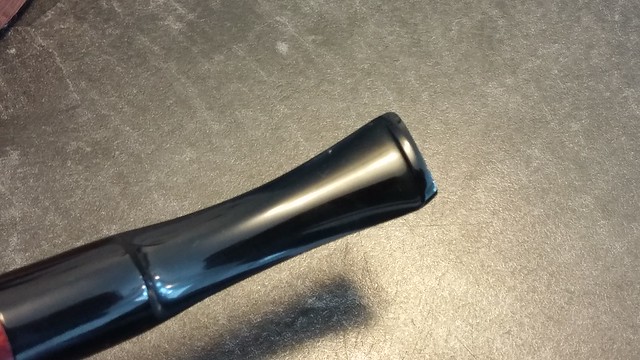 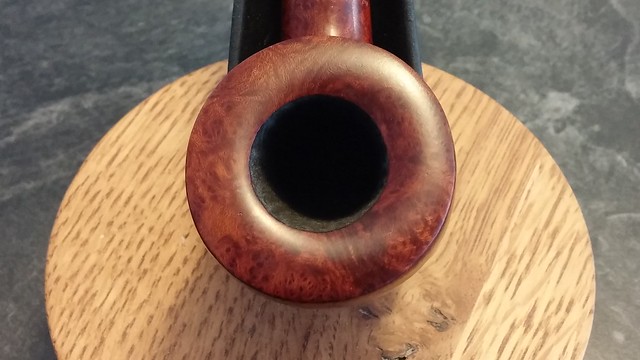 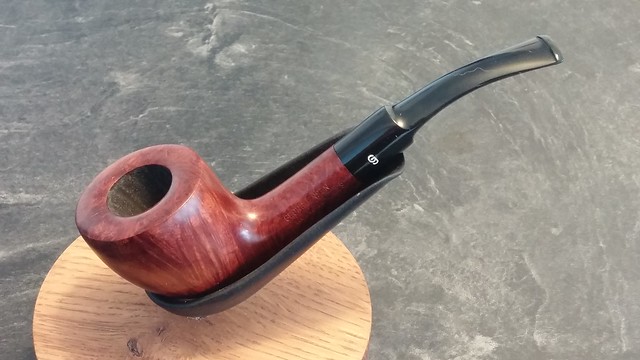 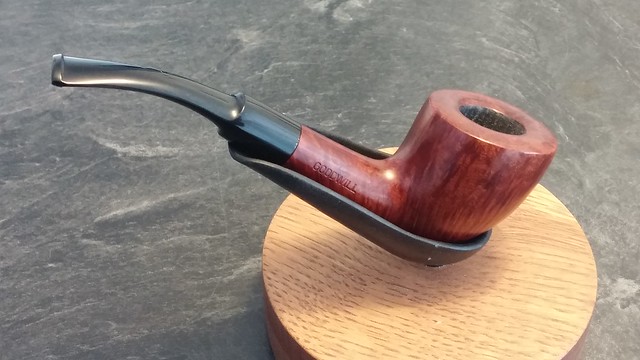 1 thought on “Sprucing up an Unsmoked Georg Jensen Goodwill 48”