This beautiful Søren freehand pipe is similar in shape to the Karl Erik pipe in a previous  post. Both pipes are freehand sitters with plateau tops on rim and shank, and both have fancy turned stems, but of the two, this Søren takes the prize for perfect briar. Unlike the Karl Erik, which had a few pinhead-sized fills in the wood, the briar used for this Søren is flawless. Nothing but straight grain running up the bowl and shank. It’s a true treat for the eyes!

As you can see from these first pictures, the pipe arrived in excellent estate condition, in its original pipe sock and with none of the dings, dents and other issues usually associated with a pipe of this vintage. The bowl had a light cake and there was a buildup of tars on the plateau rim, which I hoped did not conceal any scorch marks. The stem was original, though the “S” stamp was rather worn. The vulcanite was fairly oxidized and there was some tooth chatter at the bit.

The pipe is stamped “Søren” over “Hand Carved” over “Made in Denmark”. A quick look on Pipephil.eu told me that the pipe was carved by Søren Refbjerg Rasmussen. Pipes for the European market are mostly stamped “Refbjerg” while those for US are stamped “Søren”. 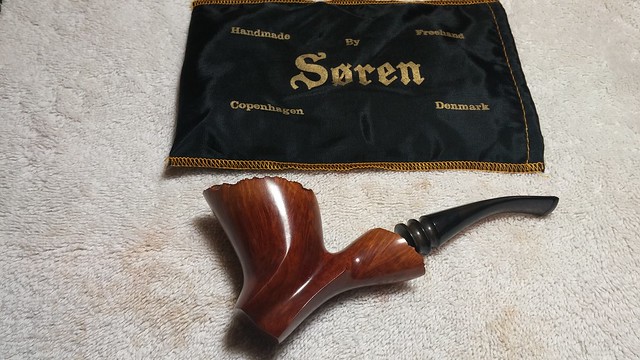 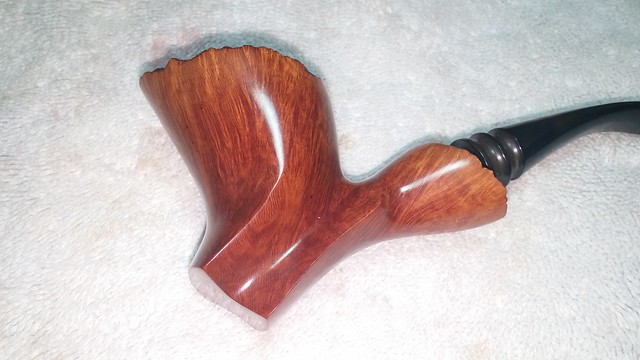 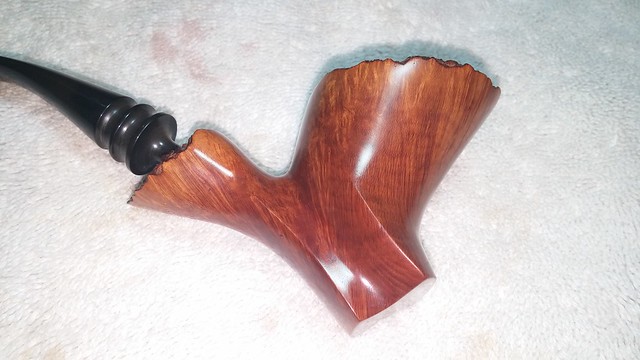 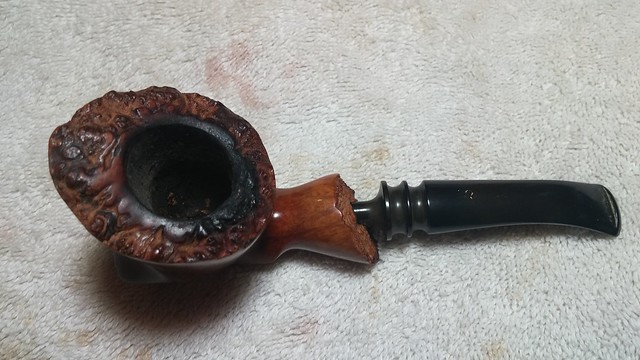 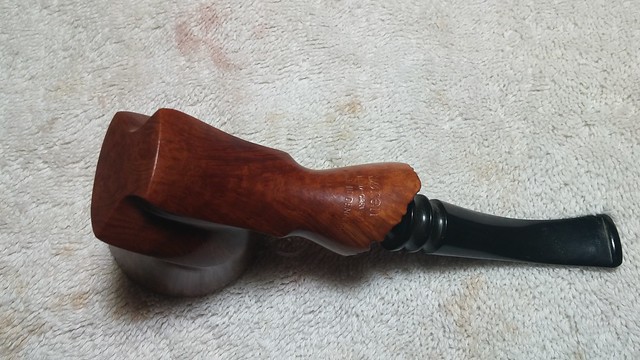 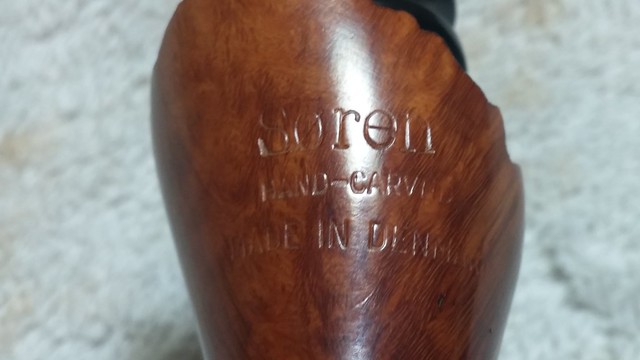 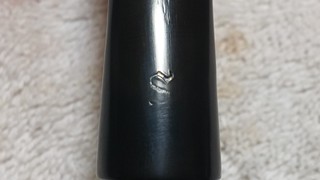 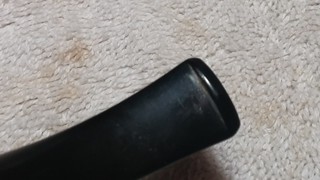 My Castleford reamer set made short work of the cake in the bowl. I followed the reamer with a light sanding to smooth out the chamber walls. 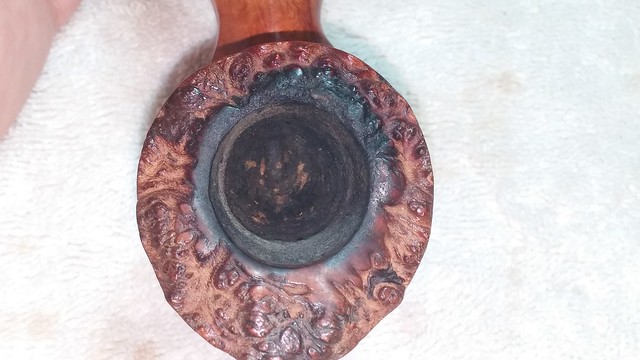 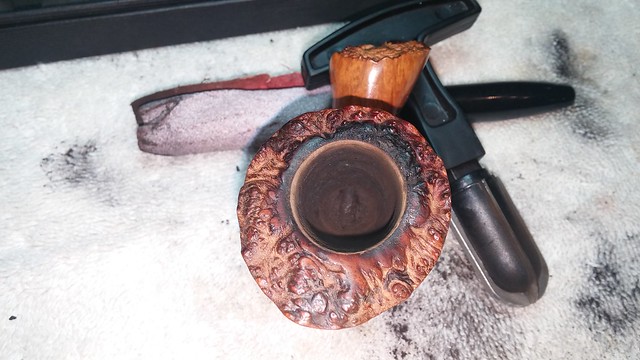 I scrubbed the stummel with Murphy’s Oil Soap and a toothbrush. This removes dirt and grime from the plateau surfaces along with old wax and whatever else might be lurking about. The rim tars proved to be rather soft and came off easily with the toothbrush. There is a very slight discolouration left where the tars were trapped in the plateau, but that would blend in more later. 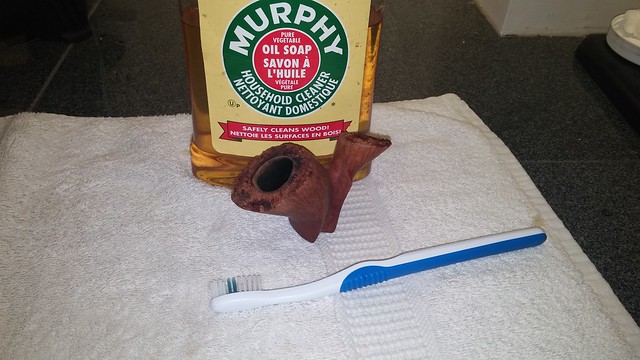 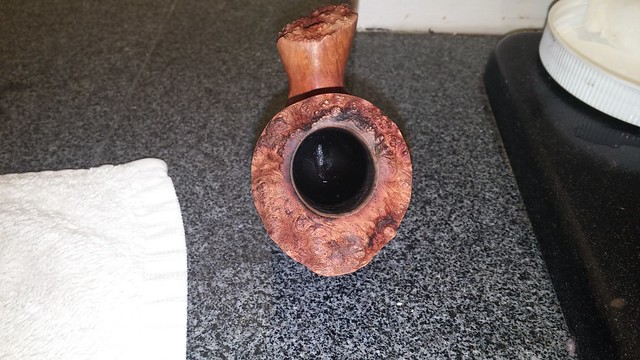 The stummel’s airway proved to be very clean, only needing a few pipe cleaners dipped in alcohol to freshen things up. The airway through the stem was just as easily taken care of. 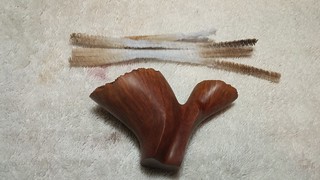 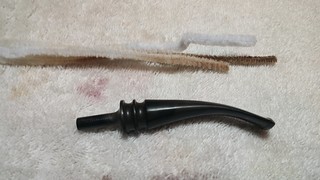 I set the stummel up with a salt and alcohol treatment to pull out any remaining tars and odours hiding in the shank. 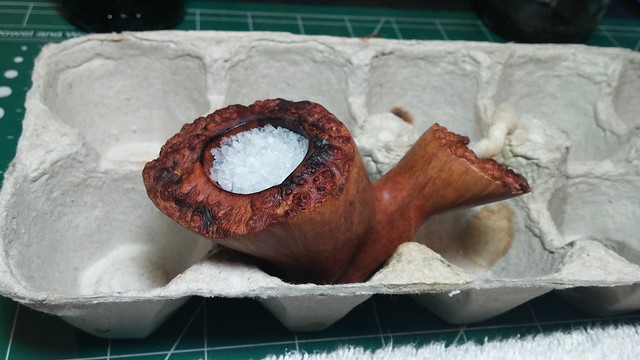 While the stummel sat, I worked on the stem, starting with a scrub with Meguiar’s Scratch-X plastic polish to start removing the oxidation. I was successful in cleaning up the majority of the vulcanite with a few application of the Scratch-X, but the discolouration in the rings of the stem was much more difficult to get at. I decided to soak the stem in Oxyclean for a few hours to try to soften the oxidation enough to clean out the rings. 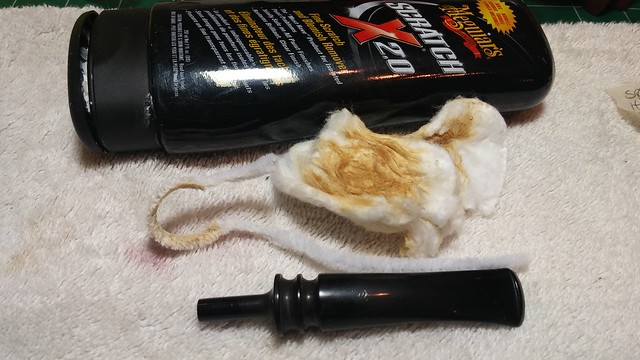 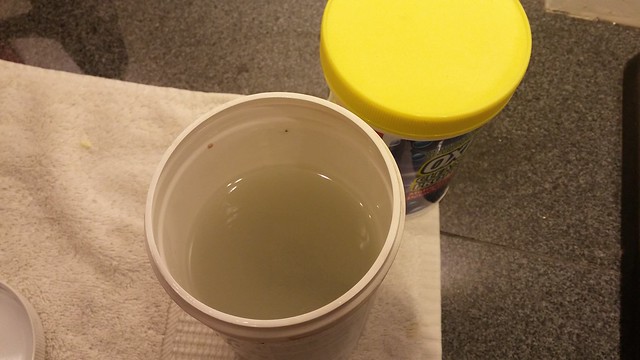 When the stem came out of the Oxyclean bath, I scrubbed it down with a piece of Magic Eraser, which easily conforms to the odd contours. 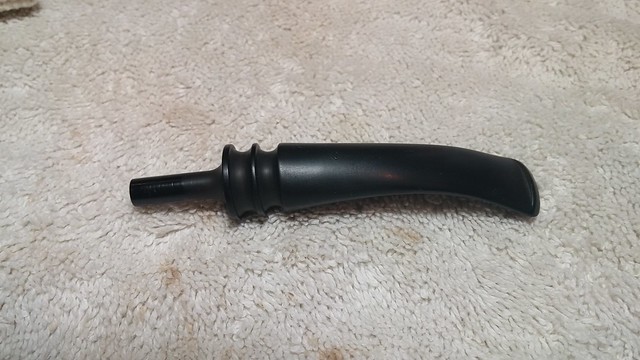 A drop of clear CA glue filled the remaining tooth marks in the bottom of the bit. When the glue cured, I sanded the fill smooth and gave the stem a full course of MicroMesh pads to remove the sanding marks and bring up the shine. I was careful to avoid obliterating the already damaged stem logo. 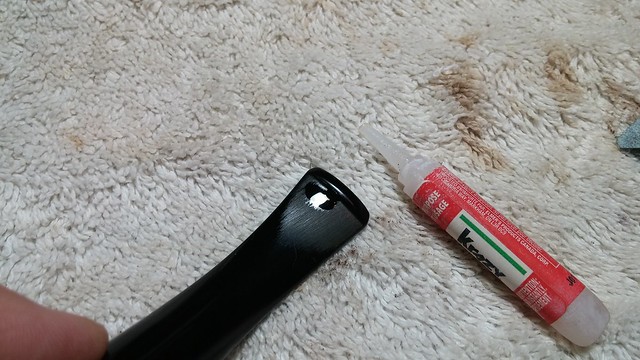 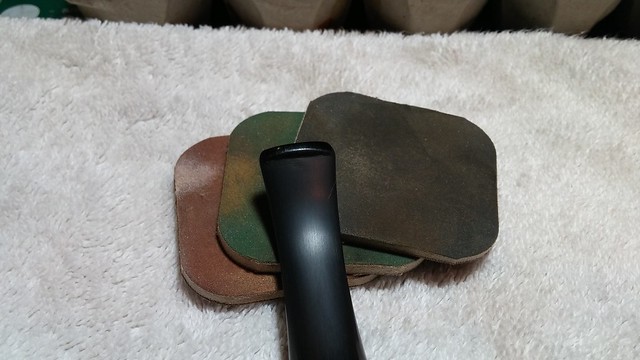 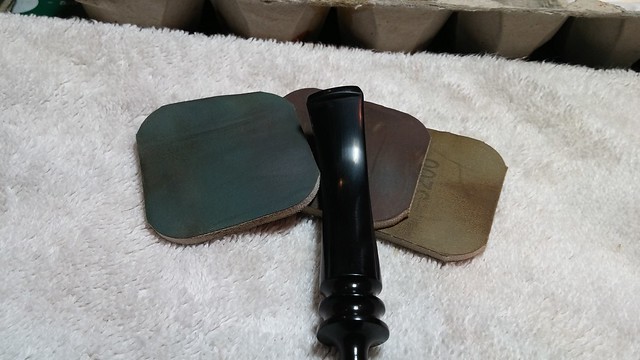 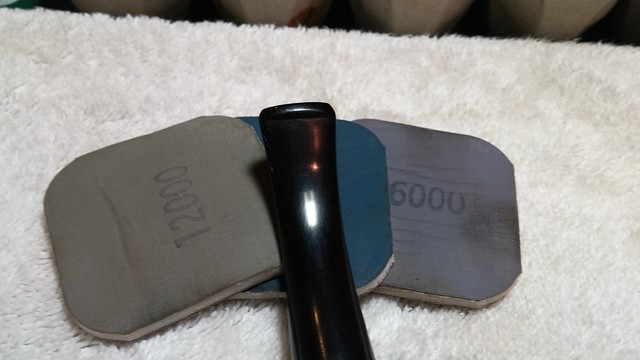 By this time, the salt and alcohol had worked their magic on the stummel’s airway. The twist of cotton ball in the shank had wicked up the old tars loosened by the alcohol. 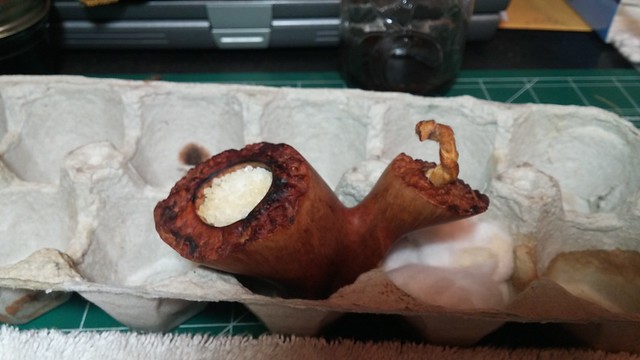 I dumped out the salt and ran a pipe cleaner through the airway and around the chamber to remove any stubborn salt crystals and then wiped the briar with mineral oil to refresh the stummel’s original virgin finish. I debated staining the plateau, but dismissed the idea quickly – why mess with perfection? 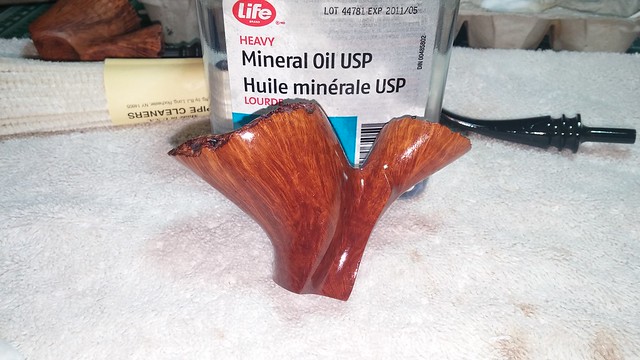 Both stummel and stem were buffed with White Diamond on the wheel and given several coats of Carnauba wax to finish off this refurb. What started off as a beautiful pipe is now a real show-stopper in my books. The oil finish and the natural plateau on rim and shank are the perfect background against which to show off the flawless briar.

This Søren is a very tactile pipe, with its uniquely carved angles and curves fitting the hand with surprising comfort. The angle of the stem and the pipe’s weight (or lack thereof at a mere 57 grams) and balance will also appeal to the clenchers out there as it hangs easily from the jaw with little effort.

Søren Refbjerg Rasmussen is now retired from pipe making, so this is a great opportunity to add one of his pipes to your collection. You can find it for sale now at the DadsPipes Store.

Here’s the finished pipe. As always, thanks for looking and until next time, Happy Piping! 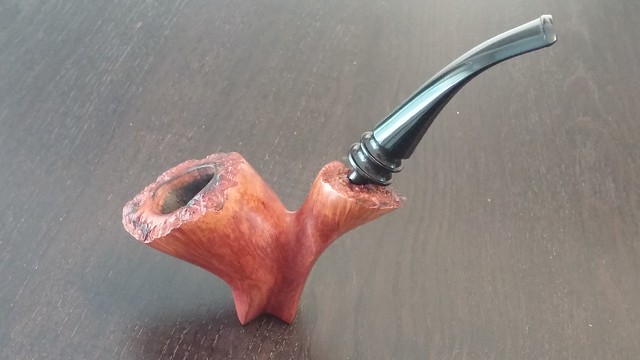 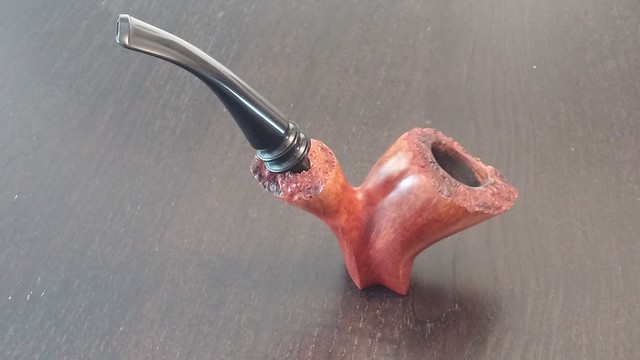 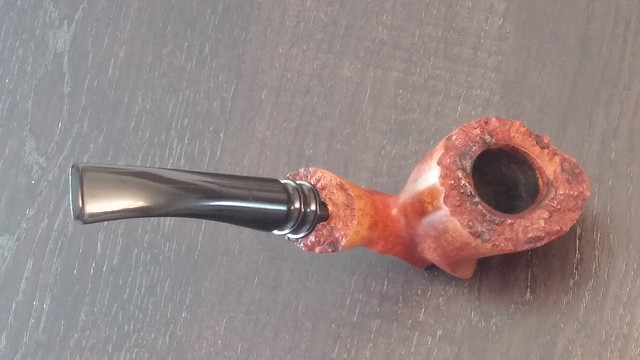 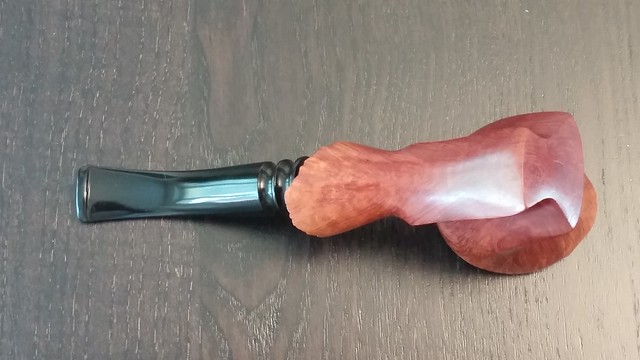 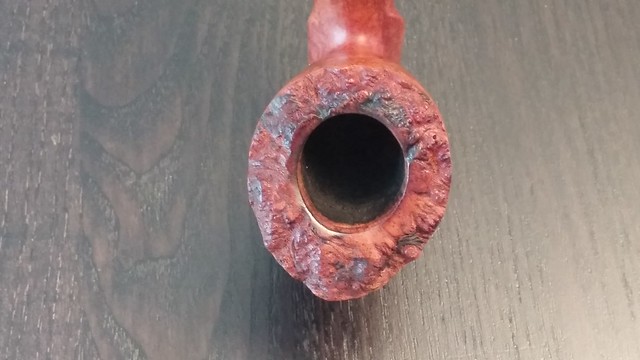 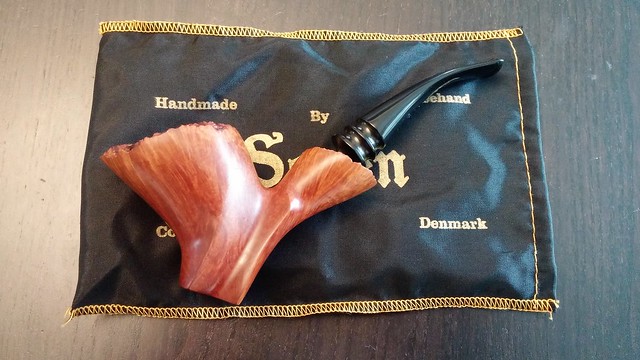 3 thoughts on “Cleaning Up a Stunning Søren Freehand Sitter”