I actually pulled this pipe out of the box of waiting estate pipes quite some time ago, getting part way through the restoration and then leaving it on my desk for several weeks before finally coming back to it. Some pipes just seem to need time on the worktable while I putter with other projects before they’re ready to take centre stage themselves.

This Stanwell Bamboo is not stamped with a shape number, bu

t I believe it would be a 30, based on Sixten Ivarsson’s Peewit design, to which Stanwell bought the rights in the 1960’s. The egg/acorn-shaped bowl, bamboo shank and relatively short saddle stem are a close match to the Ivarsson pipe shown here on the right, though the shank is shorter on the Stannie. Bas Stevens’ comprehensive Stanwell pipe shapes entry on the Reborn Pipes blog lists the 30 as a “Freehand, bent, “Strawberry”, saddle mouthpiece, by Sixten Ivarsson”. For a bit more history on the shape, see this article by Andrew Wike and published on SmokingPipes.com.

As you can see in the pics below, the pipe came to me in very good estate condition with only a little rim tar, a good layer of cake in the bowl, a bit of oxidation on the stem and the vulcanite bands bracketing the bamboo shank, and a few tooth marks near the stem button. There were a few small dents on the exterior of the bowl due to handling over the years, and a few chips out of the vulcanite band at the mortise end of the shank. These chips would need attention, but overall I thought the pipe would clean up rather nicely. 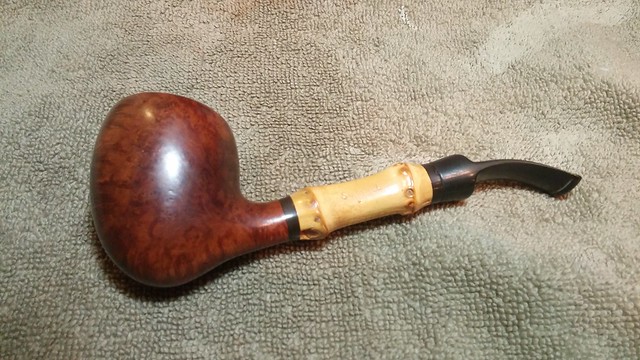 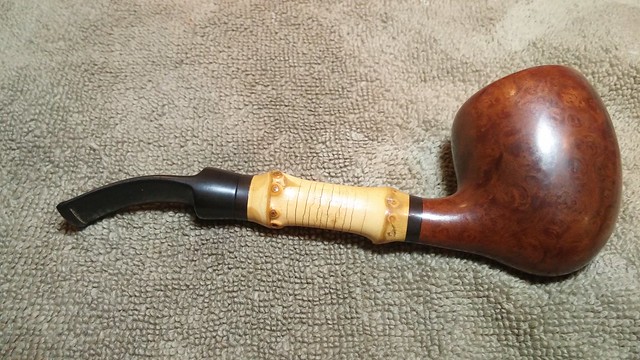 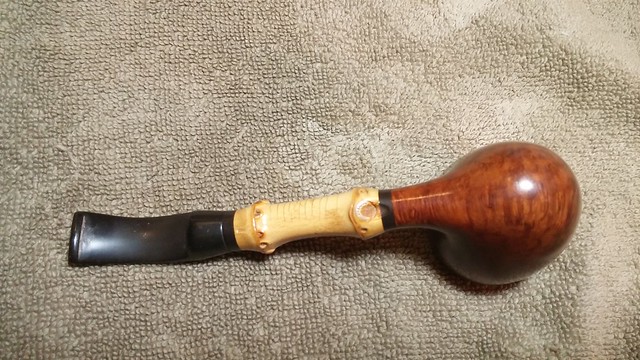 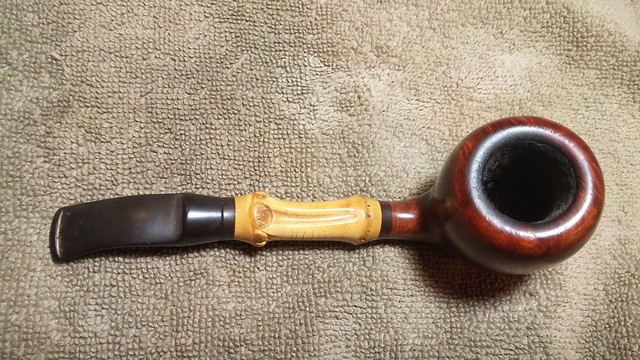 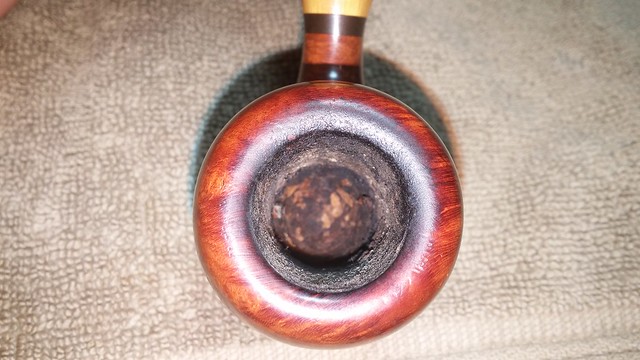 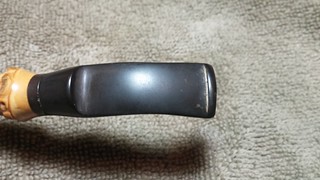 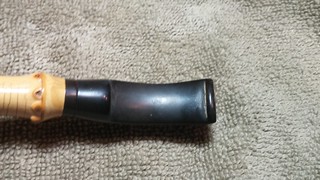 The pipe is stamped “Stanwell” on the side of the bamboo shank. The stamp was pretty worn, but still readable. The Crowned S logo on the stem was in worse shape, with only enough stamp remaining to indicate that the stem is indeed the original. I put these flaws down to over-use of the buffer by a piper eager to keep the shine on a favourite pipe. 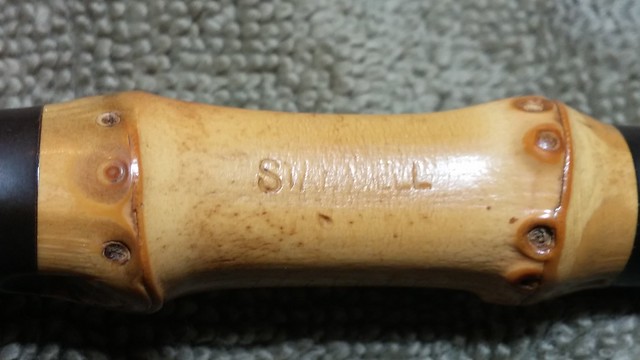 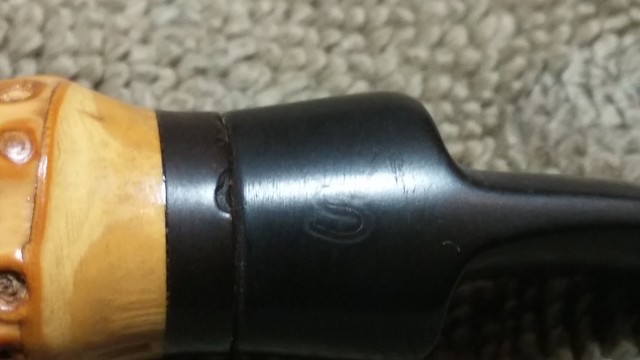 I reamed the cake from the bowl with my Castleford reamer followed up with a bit of sandpaper wrapped around a Sharpie. The cake had done a fine job of protecting the briar; despite frequent use, the chamber was in excellent shape, and the drilling was spot on. 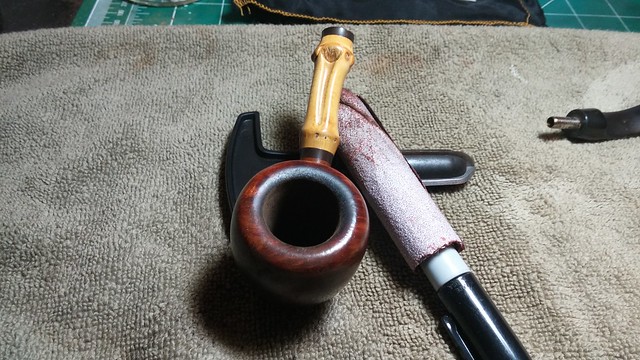 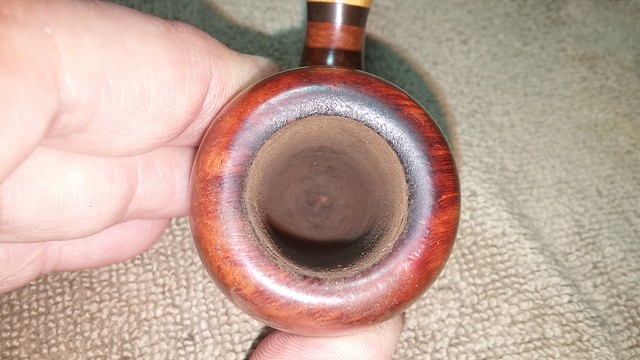 I removed the rim tars with cotton pads dipped in isopropyl alcohol. It took only 3 pads and a few minutes work to reveal the cross-grain on the rim. 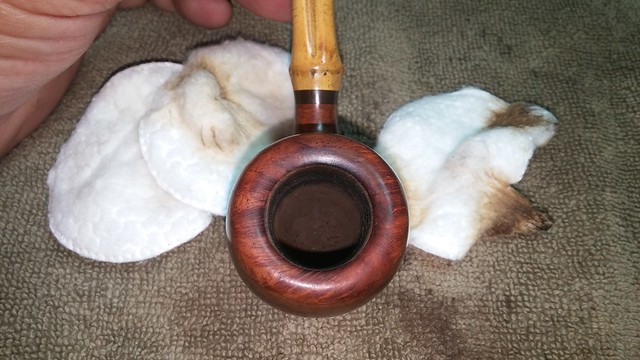 I cleaned the internals of both stem and shank with pipe cleaners, cotton swabs and more alcohol. The tars cleaned up quickly, indicating to me that despite needing a good reaming, the pipe had been cleaned regularly by the previous owner. 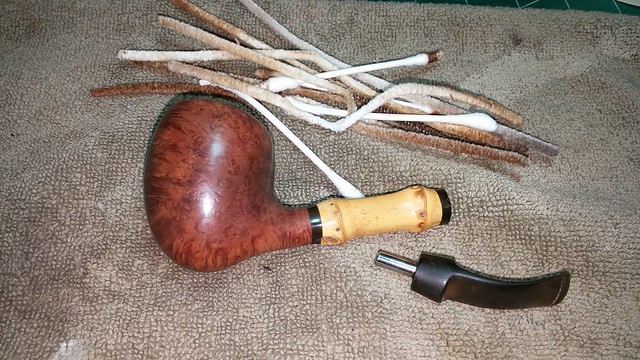 I used a tiny bit of Meguiar’s Scratch-X plastic polish on a cotton swab to remove the oxidation from the vulcanite rings at each end of the bamboo shank and then set the stummel up with a salt and alcohol treatment to remove any deep-seated tars and old odours. 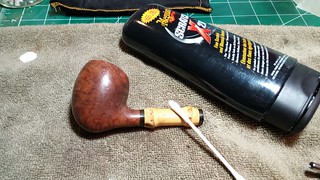 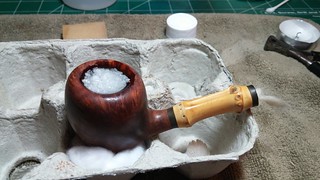 While the stummel sat, I repaired the chips in the vulcanite mortise with CA glue mixed with charcoal powder. I seem not to have taken pictures of this process, but if you’ve seen any of my stem repairs, you’ll be familiar with the task. I drop-filled the chips with the glue mixture, let it cure, then filed and sanded the fills level with the vulcanite. You’ll see a closeup pic of the repair in the final shots of the finished pipe.

With the repair done, I removed the oxidation from the stem. You can see I was not stingy with the Scratch-X polish. I like to load up the vulcanite and then scrub with a cotton pad. It usually takes several applications before the pads stay white and the stem is again black. 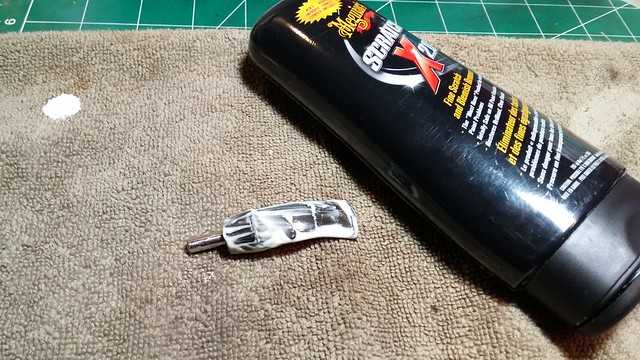 I left the stummel a full 24 hours with the salt and alcohol in the bowl, after which I dumped the salt and tidied any remaining salt from the bowl and shank. I used a damp rag and a hot iron to steam out the worst of the handling dents, and then gave the entire stummel a light sanding with several grades of sanding sponge to remove the remaining marks. It was nice not to have to avoid stampings for once. 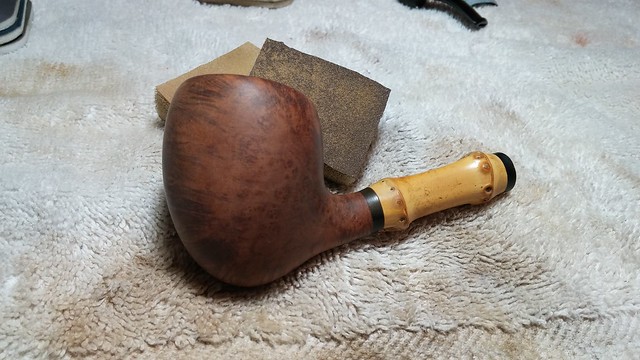 After sanding, I freshened the stain with a wash coat of a well-diluted blend of Fiebings Dark Brown and Saddle Tan leather dyes. When the stain was dry, I gave the briar a light wipe with mineral oil to liven things up and inject a bit of moisture to the wood. 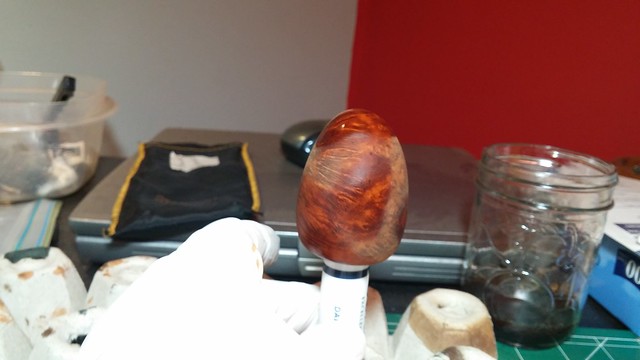 A fresh bowl coating gave the bowl a factory finish. 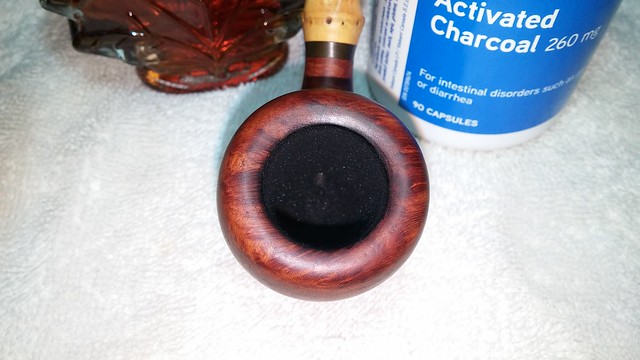 I finished the restoration of this Stanwell Peewit Bamboo with a quick trip to the buffer for a run of White Diamond compound and several coats of Carnauba wax. Bamboo shanks colour with age and use, so nothing will make this pipe look completely new again, but I think it’s as close as it can get.

The pipe stem is once again a deep, glossy black, and the briar has a lovely, warm burnished glow. The rim is smooth, highlighting its rounded edges, and the graceful curves of the egg shape flow smoothly through the vulcanite shank bands to the bamboo shank, which has aged gracefully in the hands of an attentive original owner.

This Stanwell Peewit Bamboo is now ready for another 40 years of active service with a new piper. Here’s the finished pipe. 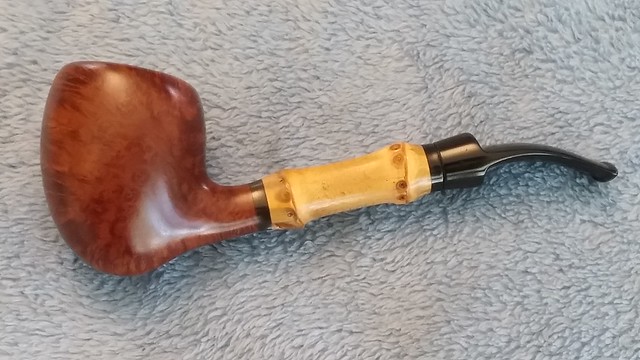 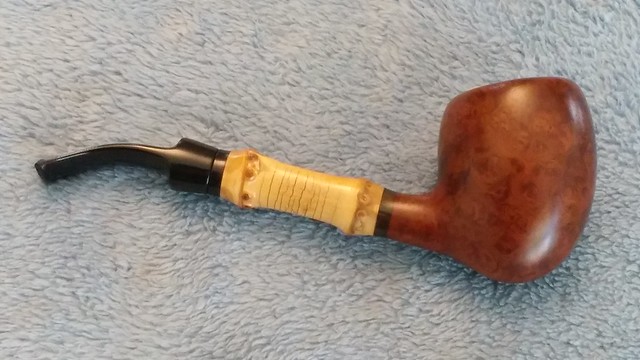 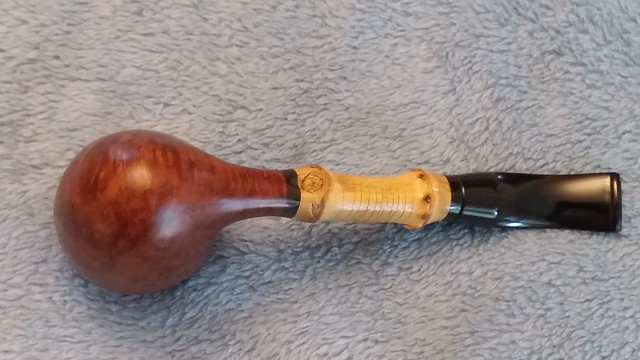 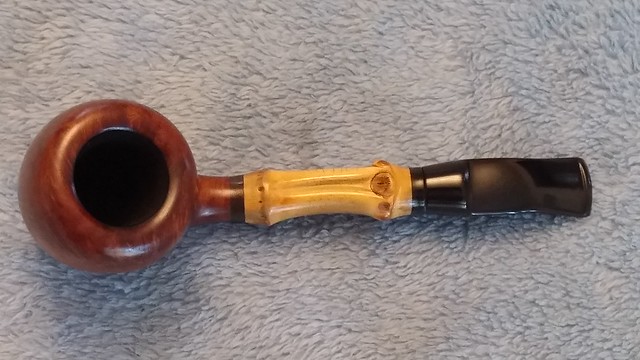 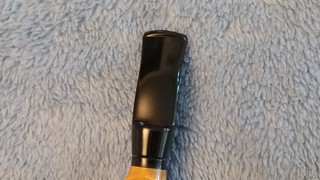 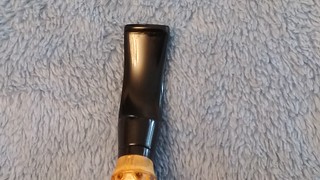 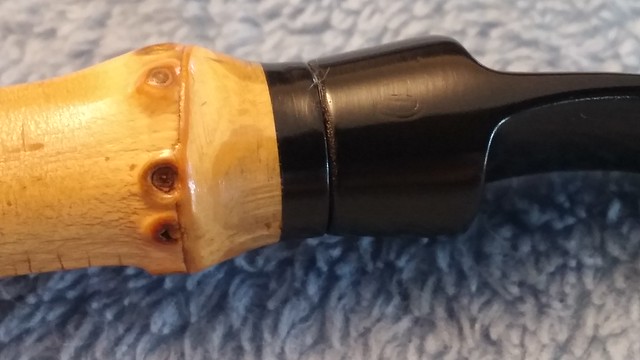 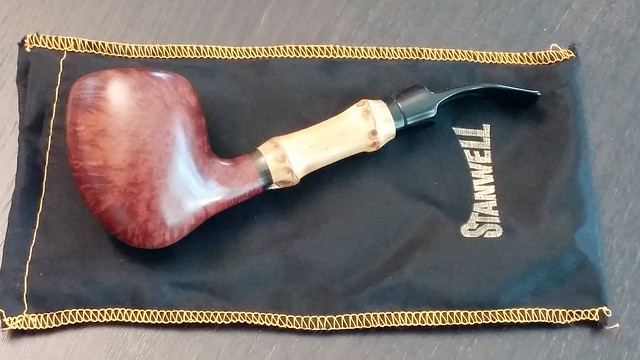