This pipe restoration was a bit of a challenge, though not for the reason you might think. The refurb work was actually very straightforward and went smoothly but for one bump in the road. The challenge here rested in deciphering the brand information and tracking down the maker.

The pipe is a straight Dublin shape. I received it in decent estate condition, all things considered. There was a bit of lava buildup and the rim was also victim to some other rim abuse in the form of knocking dents around approximately one-third of the bowl. The stem was heavily oxidized and the button was half missing from the top side of the bit. There was some work to be done here for sure, but the pipe was in far better shape than some of my other estate purchases. 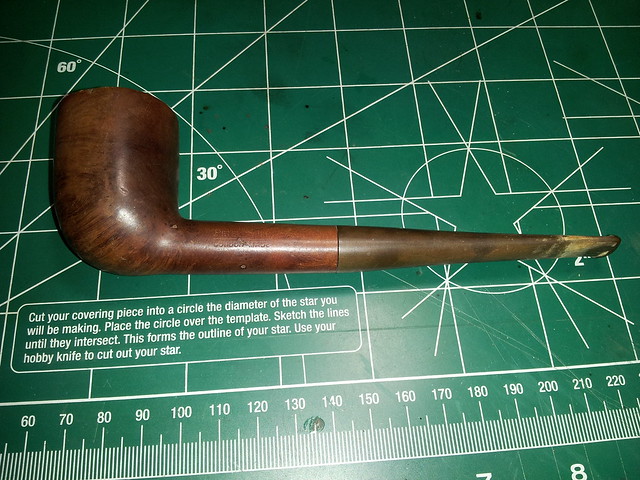 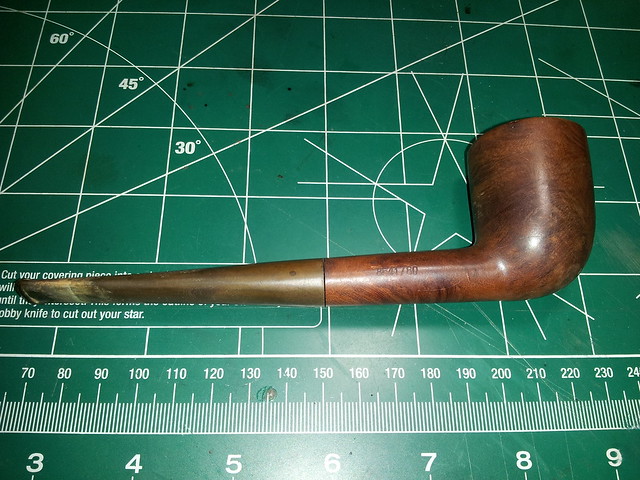 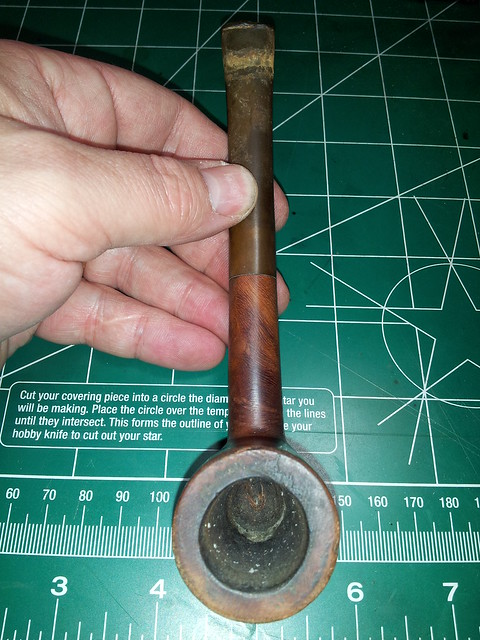 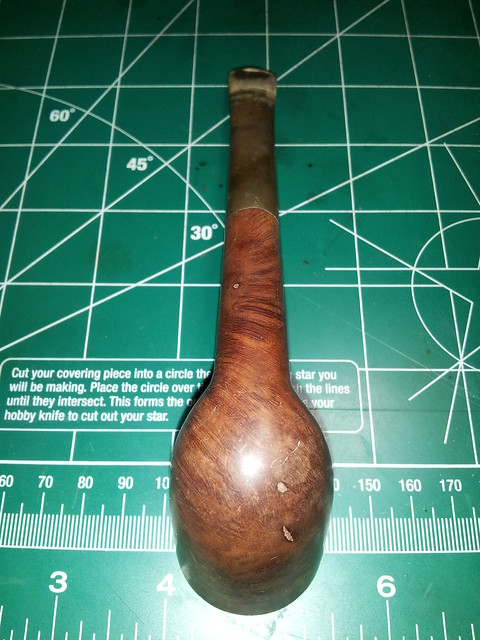 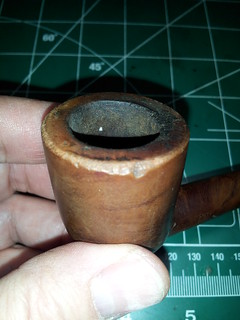 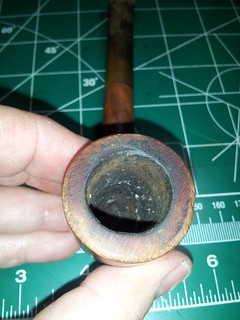 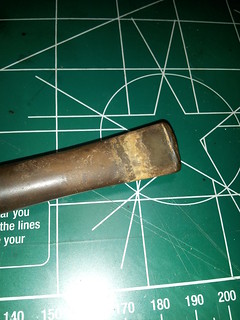 The interesting part of this story came from reading the stampings, or what was left of them. The shank was stamped “Pete??????” (question marks mine) over “London Made”. Both lines were in block letters, and separated by a horizontal line. The left shank was stamped “Made in England” over “8641/80”. 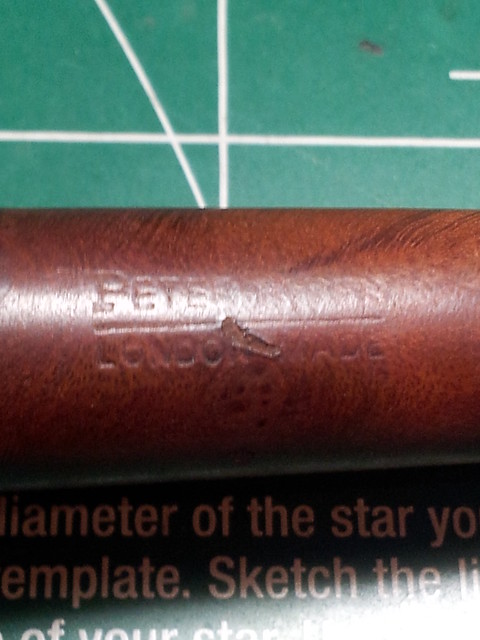 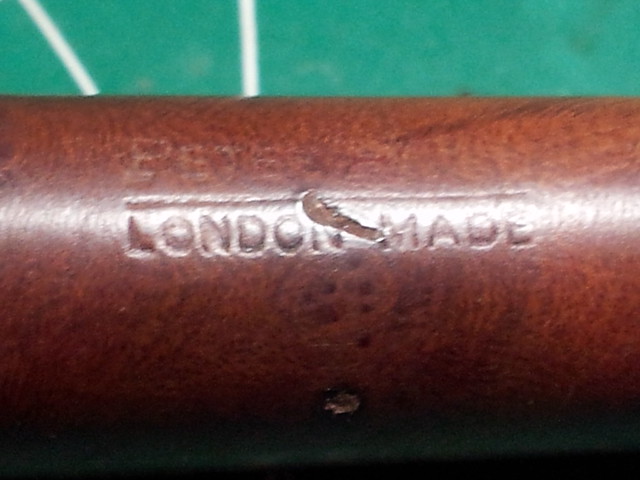 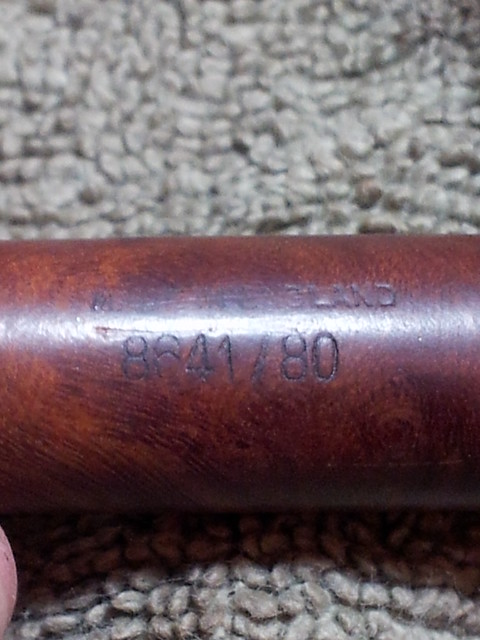 I originally wondered if I had stumbled upon an English-made Peterson pipe, but my research turned up nothing. Also, the missing parts of the name stamp seemed to call for more letters than “Peterson” afforded. Hmmm. So I turned from the brand to the shape number, hoping that this line of enquiry would pay off. This time I made some progress. 8641 is a GBD shape number, indicating a straight Dublin with a round stem, exactly the shape of the pipe in my hands. I’m not sure of the significance of the “/80” after the shape number on my pipe. A dating scheme, perhaps? A bit more digging into GBD sub-brands yielded this nugget of information about “Peter Piper” pipes from Pipedia.org:

“The Peter Piper trademark was first applied to a pipe in 1925, and granted on June 1, 1926 to Cadogan France Limited, whose offices were in London. Despite this, the pipe was made at the Marechal Ruchon factory in St. Claude, France. And, despite this, as the pipe was often stamped with London nomenclature. An excellent example of how blurred international borders became where Oppenheimer and Cadogan were involved. For more information see GBD”- Pipedia.org

Further digging indicates that the Peter Piper and Dr. Plumb marques were made by GBD as “cheap” lines of pipes for export to Canada and the United States. If anyone has anything to add to the Peter Piper information, please send it my way and I’ll update the post accordingly.

With the pipe’s provenance as settled as I could make it, I moved to the actual restoration. I dropped the oxidized stem into a bath of Oxyclean and warm water to soak while I worked on the stummel. I began, as always, with a bowl reaming to remove the cake and expose any flaws or damage in the tobacco chamber. Luck smiled on me here. The chamber was in good shape. 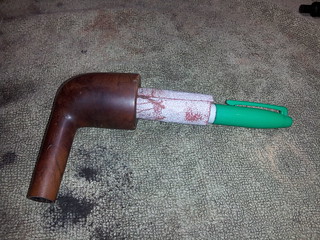 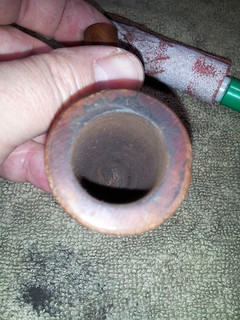 I topped the bowl to remove the lava and erase some of the dents and dings. I began to smooth out the outer rim of the bowl but quickly realized that two areas of deep dents would need filling. I wanted to have a clean stummel to fill, so off it went for a short soak in isopropyl alcohol to remove the dirt and grime from the briar. When it came out, I dropped CA glue and briar dust into the dents and let it cure before sanding the rim smooth. Without the fills, I would have had to remove 2-3mm from the top of the bowl, which I thought excessive when a few small fills would preserve the original bowl height. I also replaced several fills elsewhere on the stummel while I was at it, but left one old putty fill alone. It was dead center in the nomenclature stamp on the left side of the shank and I didn’t want to risk completely destroying the already damaged stamp. 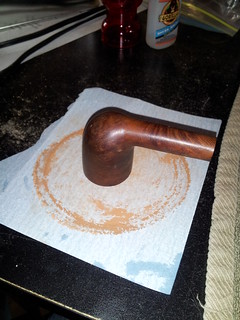 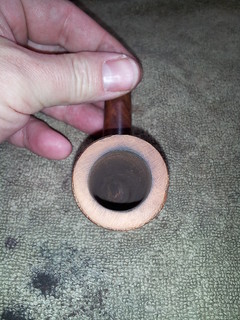 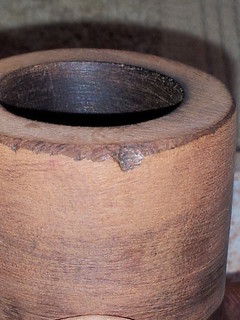 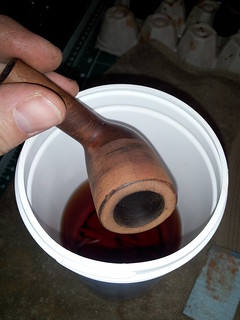 Foreshadowing? Perhaps. After all the effort to read and protect the stamping, I got momentarily distracted while sanding a fill near the bowl/shank juncture and accidentally erased most of the “Pete” from the brand stamp! Argh! I should know better than to try to hold a conversation with sandpaper in my hands….. 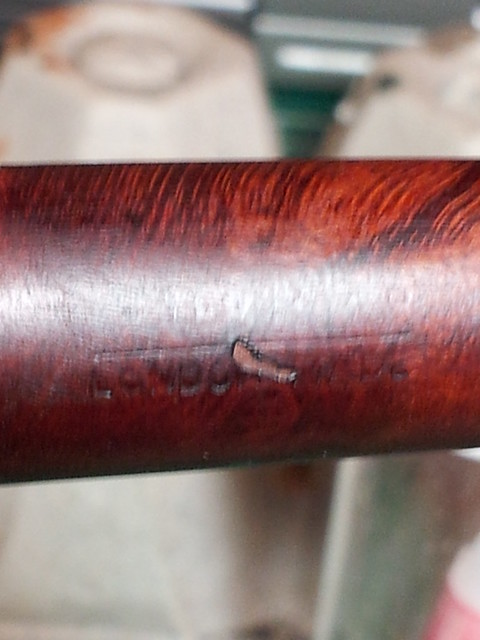 After a suitable period of chest-beating and self-recrimination, I pulled myself together and carried on with the refurb. The stummel was ready to stain, so I wiped it with a bit of Fiebing’s Dark Brown and let it dry. I buffed off the excess stain with an old towel and then set the stummel aside to work on the stem. I pulled the long-forgotten stem from its Oxyclean bath and scrubbed the oxidation off with Magic Eraser and 600-2000 grit wet sandpaper. I needed the curved end of a dental pick to clean accumulated muck from the slot at the end of the bit, but surprisingly few pipe cleaners to sort out the stem’s internals. 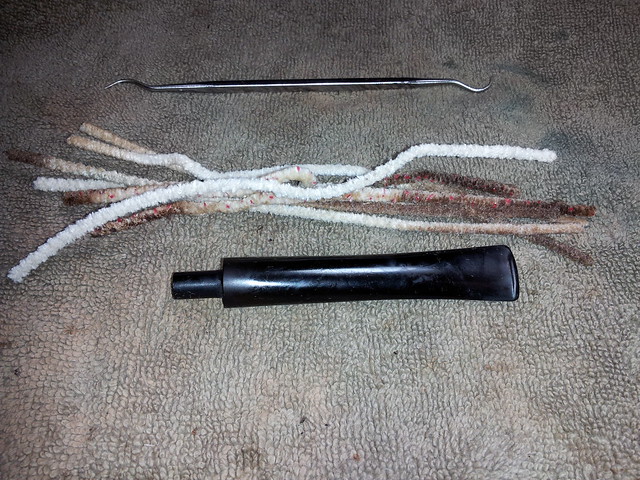 As I mentioned before, the button was in rough shape, and the bite area had a few deeper tooth dents. I dealt with both issues by mixing CA glue and charcoal powder, layering the fill material into the dents and building up the button. I let the CA cure, then used files and sandpapers to cut and shape the new button and smooth out the filled dents. I usually need to go back over the new button with clear CA glue to fill and smooth tiny imperfections like air bubbles or other gaps in the material. This can be tedious but is essential to achieve a factory look on the new button. 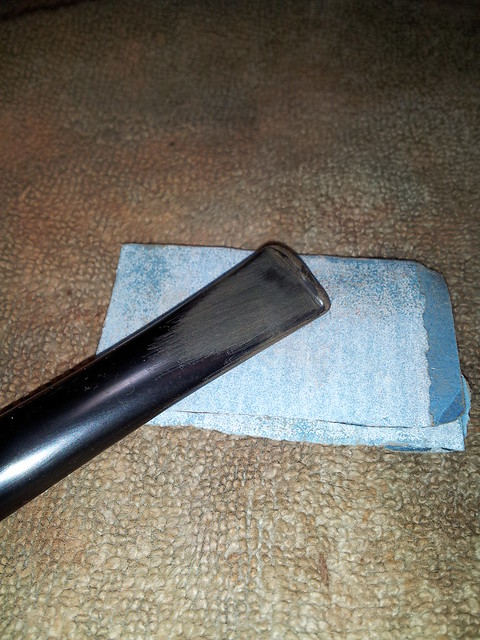 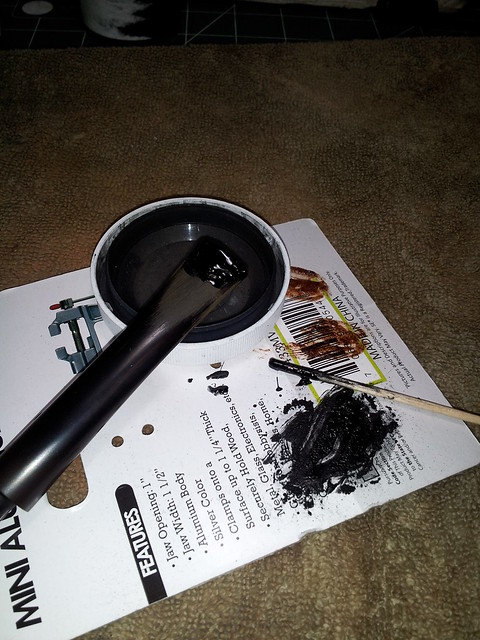 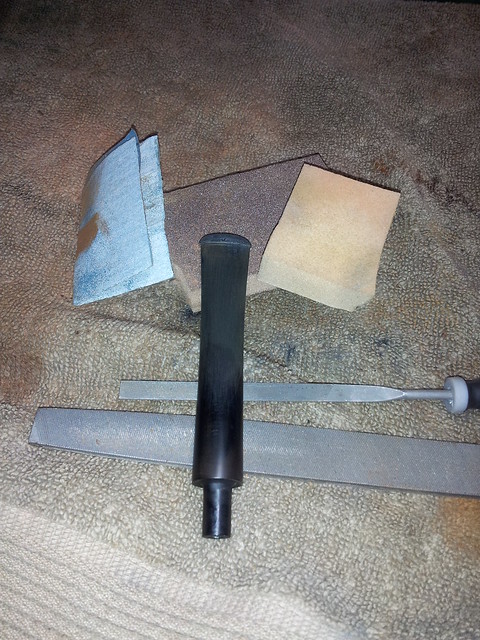 I smoothed and polished the stem with medium and fine sanding sponges and then 1500 – 3200 micromesh pads. Then it was time to take the pipe to the buffing wheel. I buffed both stem and stummel with White Diamond compound, being careful not to inflict any further damage on the stamps, and then applied several coats of Carnauba Wax to the entire pipe. Apart from the rubbed out nomenclature, the pipe cleaned up rather nicely, I think. It has the look and feel of an older European-made briar, and though it was created as a budget pipe, the craftsmanship is spot on, as one might expect from a GBD product. 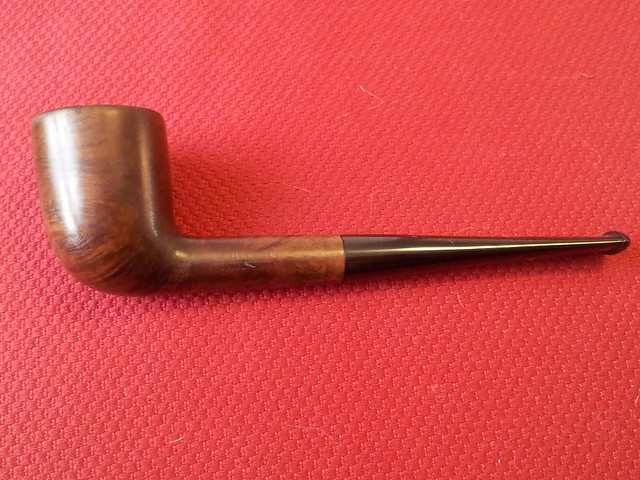 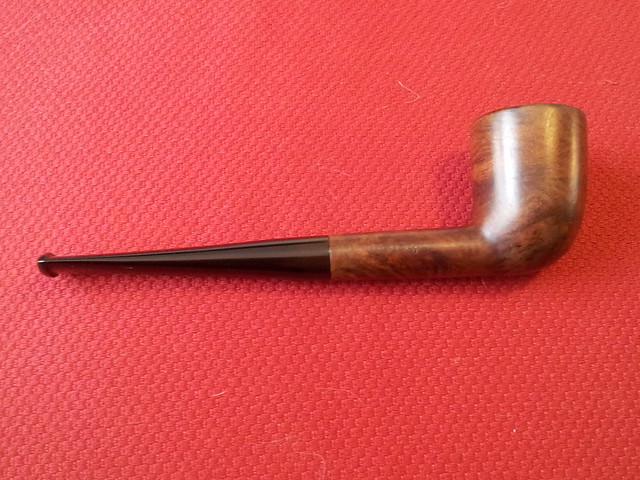 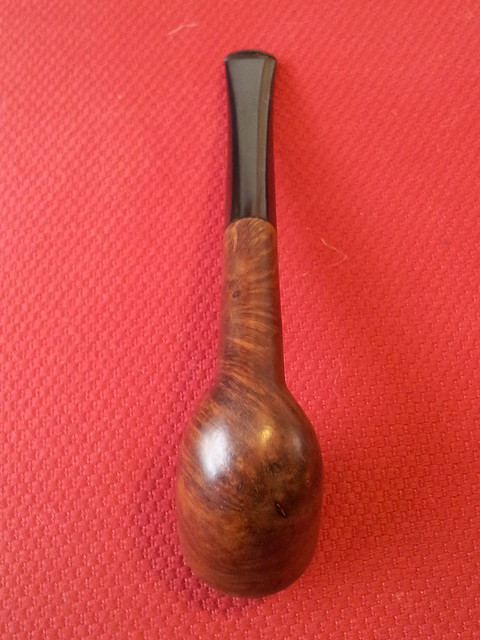 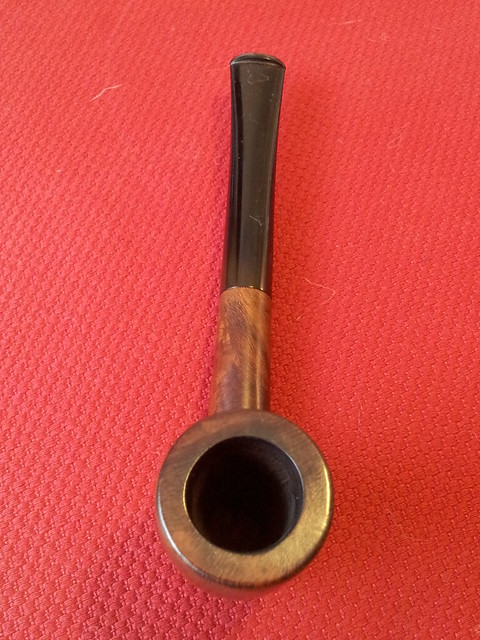 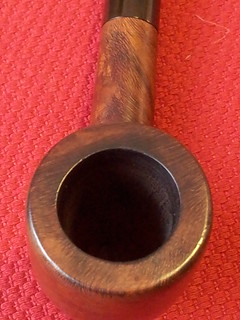 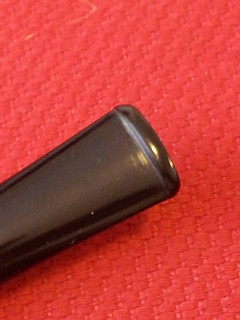 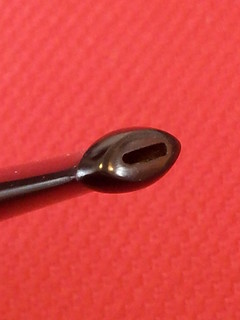 16 thoughts on “Researching and Reviving a Peter Piper by GBD”