This pipe was sent to me by a DadsPipes reader for some much needed R & R – read that as “Rescue and Resuscitation” rather than “Rest and Relaxation”.

As was explained to me by the owner, this Brigham Bent Acorn, along with a Sportsman model he also sent me, belonged to his late father. The owner’s hope was that the pipes could be cleaned up and made usable, much as I had done years ago with my own Dad’s pipes. The challenge, as you will see from the pics, was that both pipes had been smoked hard and hot and showed signs of significant heat damage.

Here is the Bent Acorn as it looked when I first brought it to the bench. It was rather grimy looking on the outside, with a heavily oxidized stem and an uneven crust of lava coating the rim. There was one sizable burn mark on the rim at about the 11 o’clock position that ran down the outside of the bowl about 3/8 of an inch. Also concerning were the numerous dark char marks peppering the outside of the bowl and even up the shank. 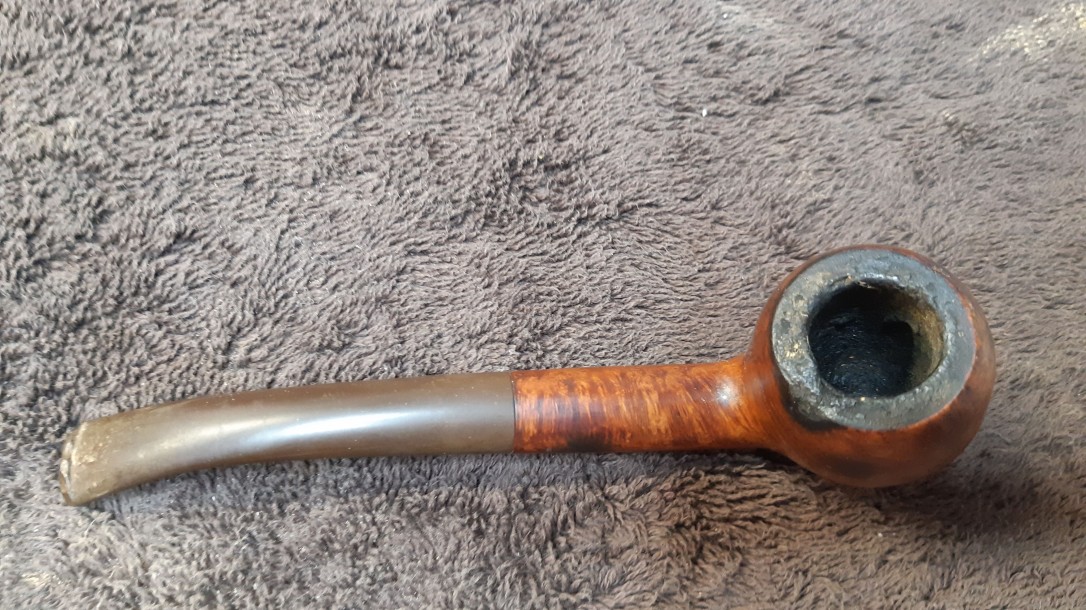 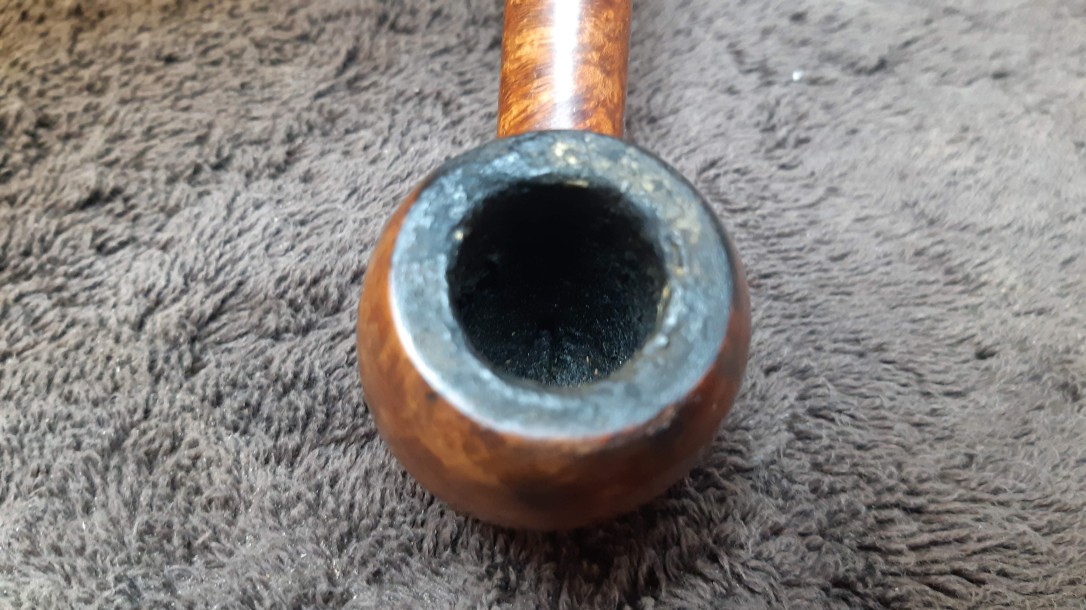 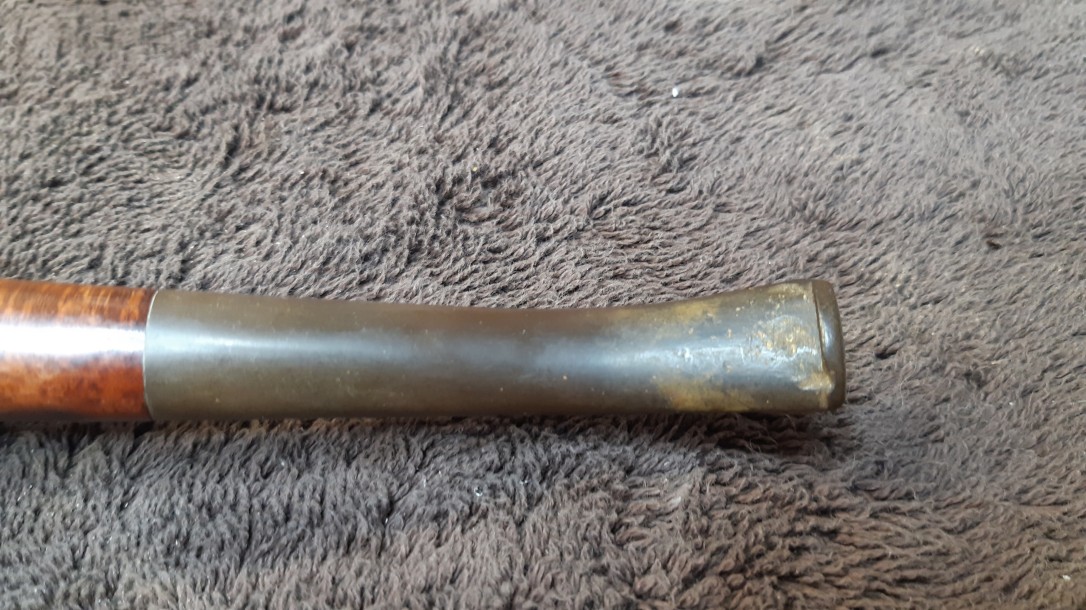 The left shank of the pipe is stamped with the number “6”, then “Brigham” over “Made in Canada”. The 6 is upside down compared to the COM stamp, so it looks like a 9, but Brigham never made a 9-Dot pipe.

The stem carries three brass pins or Dots in a Small-Large-Small horizontal configuration, which identifies it as an example of the less often seen Brigham VIP grade, one of the enigmatic alternative 3-Dot pinnings with a 600-series shape number from the the original 1938-1980 grading scheme, where it falls between the 4-Dot and 5-Dot grades. The Made in Canada stamp positioned under the Brigham logo dates this piece to the 1970s. 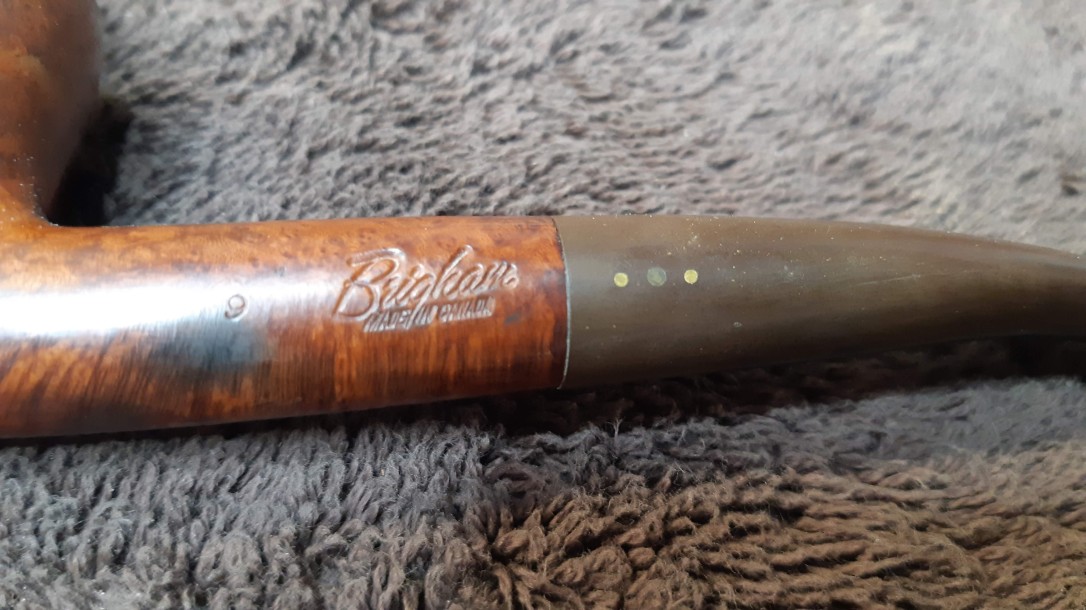 I started off the work on this pipe by first running a pipe cleaner through the stem to make sure the airway was open before dropping the oxidized Vulcanite into a bath of Oxyclean and warm water. 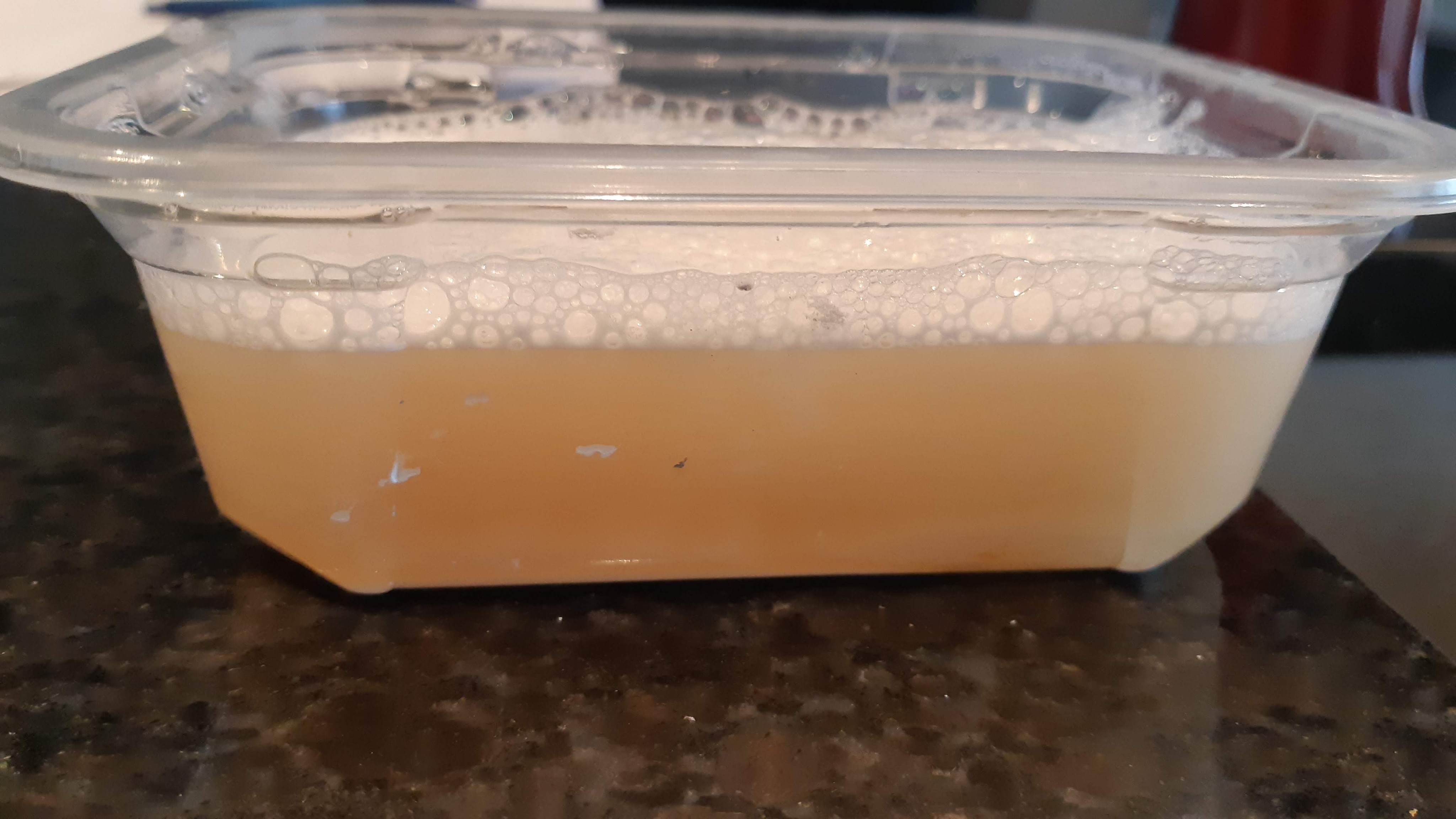 While the stem sat in its bath to raise and soften the oxidation, I scraped the worst of the lava off the rim top and reamed the chamber of what looked like decades of old cake.

The scorch marks on the briar were a good indication that I would find some heat damage inside the chamber, but I’m not sure I was expecting to find this: 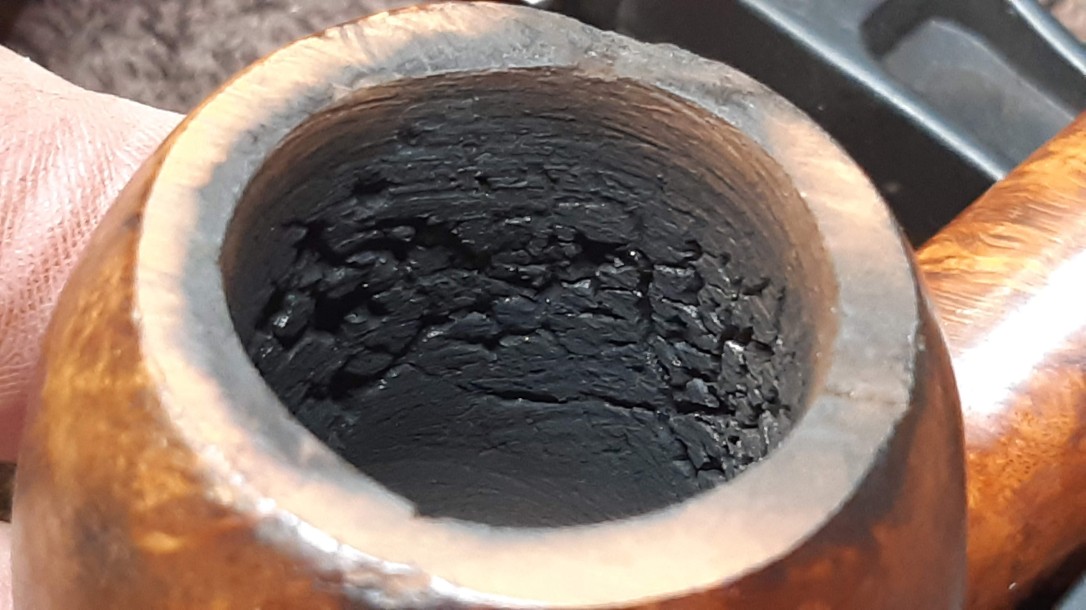 As the above pics illustrate, there was a wide band of burnt and cracked briar wrapping all the way around the inner chamber walls, extending nearly the full depth of the bowl. When I reported the situation to the pipe’s owner, I asked about his father’s smoking habits. It seems dear old Dad used to smoke his pipes in the car, usually holding the briar close to the little triangular window ahead of the driver’s door (remember those?) – the equivalent to adding bellows to the tobacco chamber. The added oxygen caused the tobacco to burn hot and fast, which helps explain the extent of the damages here.

Wanting to repair the damage and stabilize the bowl’s structural integrity before doing much else to the pipe, I cleaned up the rim a bit more and then mixed up some JB Weld epoxy and applied it to the chamber walls, pushing it into the cracks and fissures with a gloved finger.

Regular DadsPipes readers will have seen this repair technique from me before; JB Weld is a steel-reinforced high-heat epoxy that cures to form an inert and virtually burn-proof repair. I’ve used it on many damaged pipes, including several of my own. The repairs show no sign of degradation after almost 5 years of regular use. 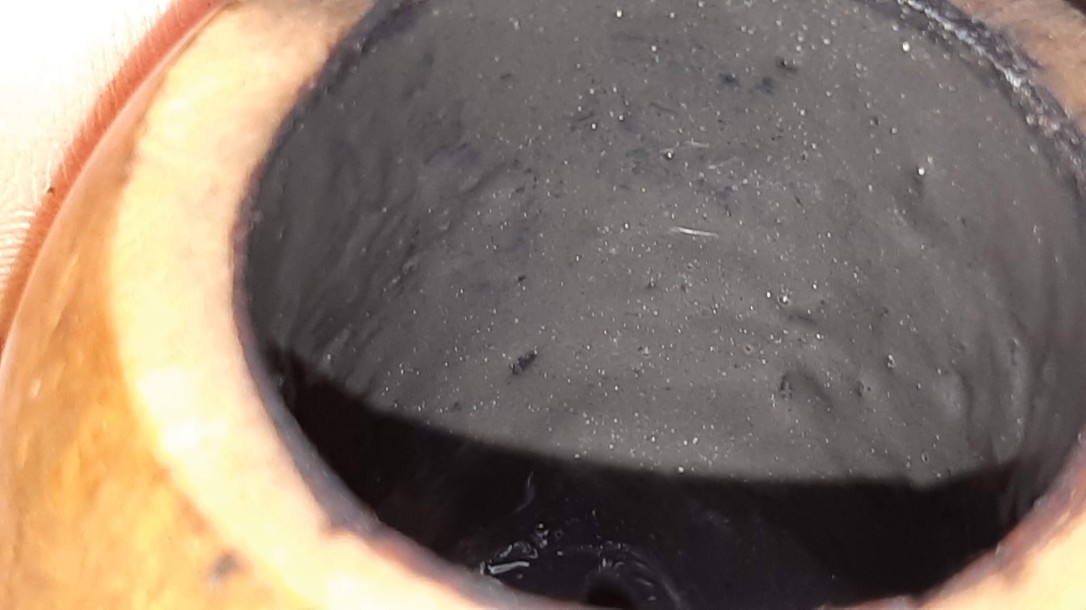 The one down-side of the JB Weld repair is that the epoxy doesn’t “breathe” or absorb moisture the way briar does, so after letting the patch cure completely, I removed as much excess epoxy as possible, leaving it only in the damaged areas. After sanding out the bowl, the JB Weld shows as a lacy network of thin lines in the chamber walls. 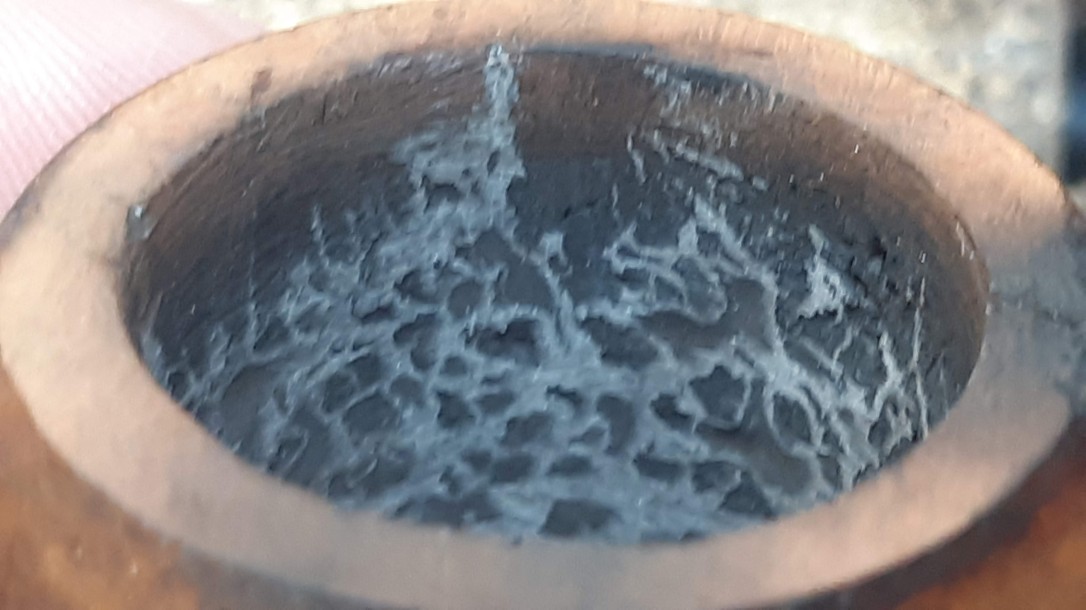 The other major issue with the stummel was the scorch mark on the outer rim. With the chamber sorted out, it was now time to deal with that flaw. The burnt briar was soft and flaked away quite easily. Rather than try to stabilize what was essentially charcoal, I sanded out the burnt material and filled the hole with a mix of CA glue and briar dust. 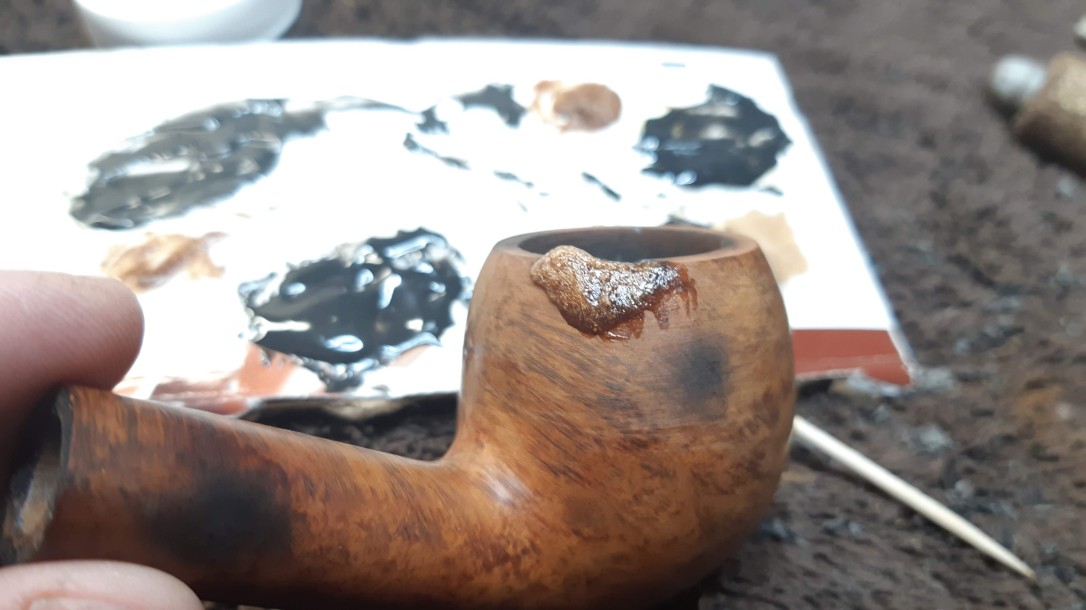 I set the stummel aside to let the briar patch cure and pulled the stem out of its Oxyclean bath. The soak had done its job and the oxidation came away under 0000 steel wool and Magic Eraser. Now black again, the stem was actually in very good shape, with only a tiny bit of tooth chatter at the bit end which sanded out easily. A few pipe cleaners dipped in alcohol cleared the airway of old tars and dirt. I wet sanded the stem to 2000 grit, then set it aside for buffing later.

The CA and briar dust patch on the stummel had cured fully by this point, so I filed and sanded it flush with the surrounding briar. I took the following picture after the initial shaping. You can see that there were quite a few air bubbles trapped in the patch. It took a few rounds of applying CA glue and sanding smooth again to fill all the bubbles and achieve a smooth finish. 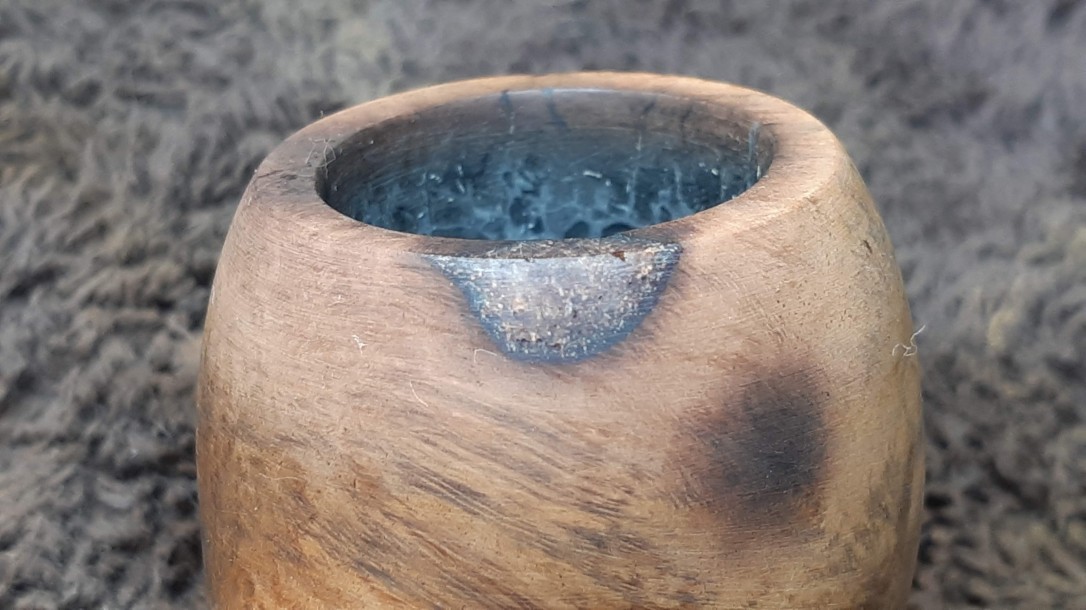 When I was happy with the patch, I gently sanded the entire stummel to smooth out the small handling marks and even out the colour of the briar. As you can see in these shots, the sanding reduced the size of most of the scorch marks on the exterior of the briar, but nothing short of a briar transplant was going to remove them completely. 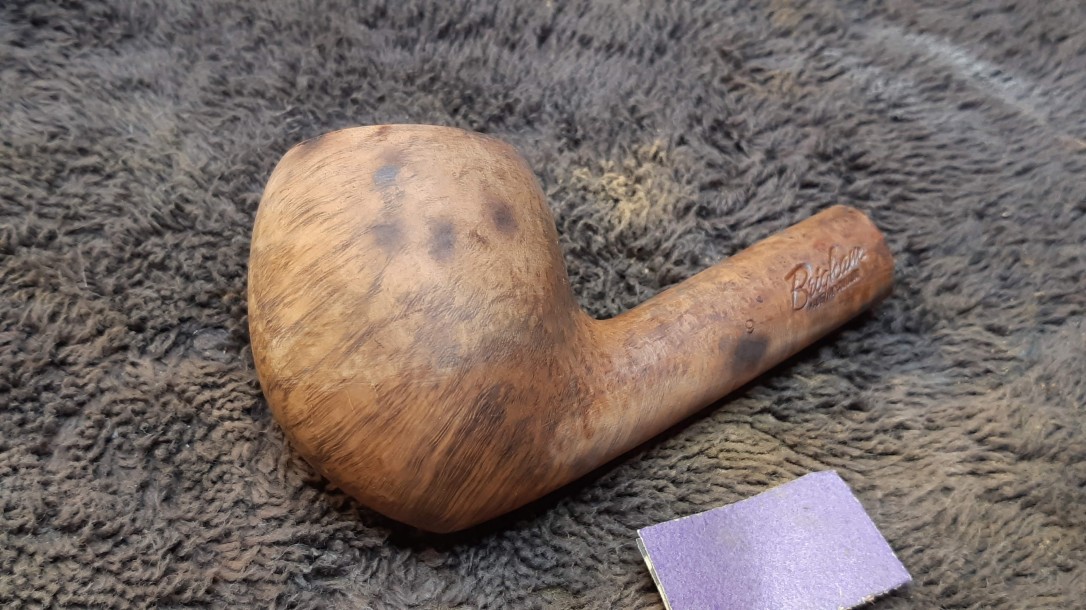 To further minimize the scorch marks and help hide the patch, I stained the pipe a few shades darker than the original, beginning with a coat of Fiebing’s Black leather dye. When the black dye had dried, I scrubbed away most of the colour with a bit of damp Magic Eraser, leaving the black only in the grain. A top coat of Dark Brown leather dye completed the contrast stain, and a light wipe with mineral oil finished off the process and gave the briar a bit of much needed moisture. 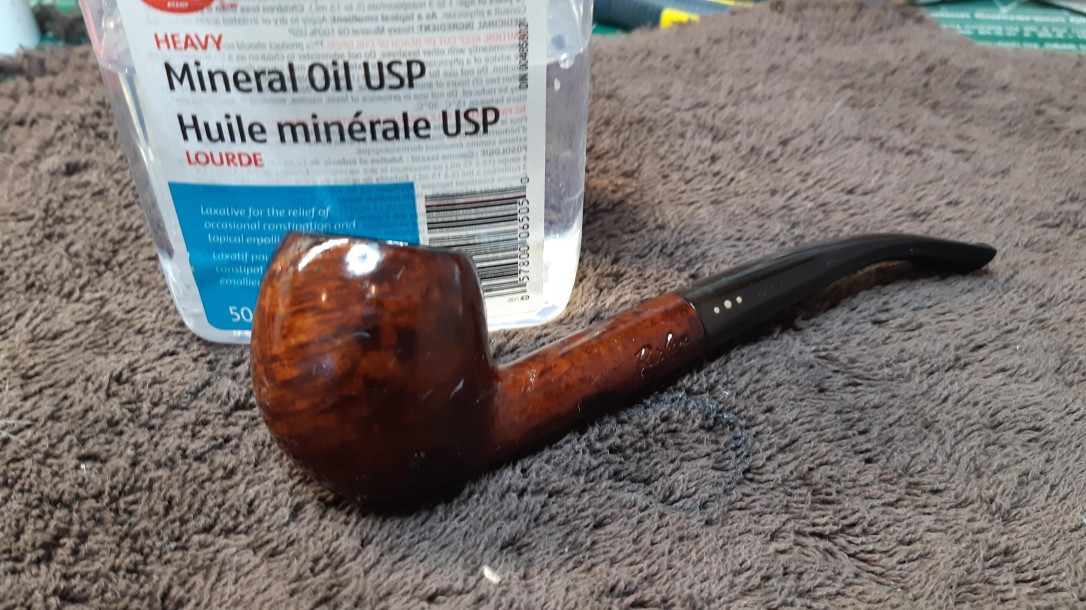 I let the stummel rest overnight before applying a bowl coating to both hide the JB Weld repair and provide a base upon which a new protective cake layer could build. My standard bowl coating is comprised of maple syrup and activated charcoal powder. You can find a detailed write-up of the bowl coating technique here. 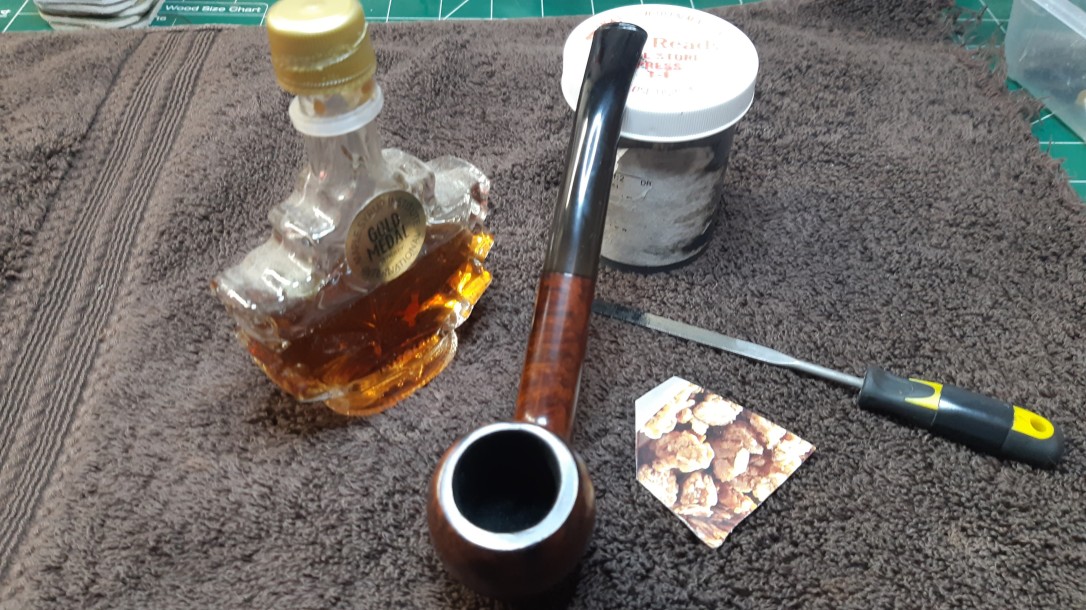 The only thing left to do with this pipe was to take it to the buffer for a run of White Diamond compound and several light coats of Carnauba wax.

The finished pipe is a vast improvement over the poor burnt-out briar that first hit the worktable. Though scars remain, the patient is once again structurally sound, clean, polished and ready to pack with a favourite tobacco. This rescued and rejuvenated Brigham VIP is now back with its owner, who I trust will think of his father every time he lights a fresh bowl.

Thanks for joining me for this restoration. I hope the tips and techniques shown in this post inspire you to tackle a similar repair yourself. 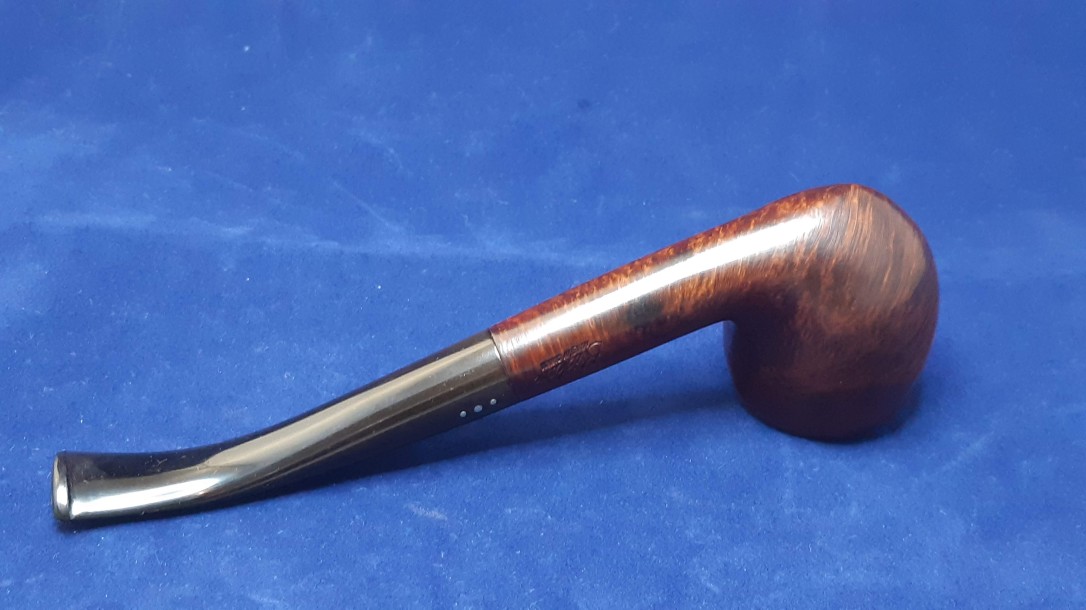