Like many collectors, I feel a little jolt of adrenaline every time I add a new pipe shape to my growing array of Brigham pipes. That jolt gets bigger when a new shape comes in a mid to high grade pipe like this Brigham 4 Dot.

The pipe arrived on my worktable in decent estate condition. There was quite a bit of lava on the rim, obscuring the inner and outer edges of the briar, and the stem was oxidized a swirly grey/green. The vulcanite was reasonably free of tooth marks, with only one or two deeper dents showing.

I’m going to call this pipe a Bent Pot shape. I don’t know if Brigham had an official name for it or not, so I’m defaulting to basics here. The shape number is 54, which is, as far as I can tell, a later shape introduced perhaps sometime in the 1970s or 1980s. This particular pipe is stamped with the three-digit shape code “454” followed by “Brigham” over “Canada”, which places its production date somewhere in the 1980s. 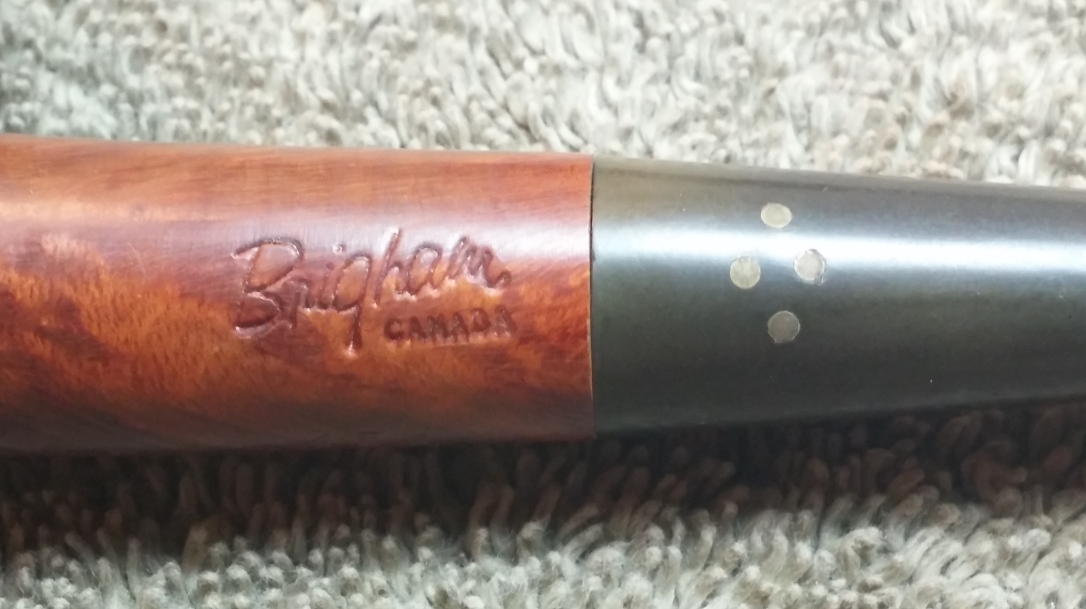 I started this refurbishment by popping the stem into an Oxyclean bath to raise the oxidation while I worked on the stummel. While the stem soaked, I reamed the light cake from the tobacco chamber and gently topped the bowl with some 320-grit sandpaper to remove the lava and redefine the edges of the rim. 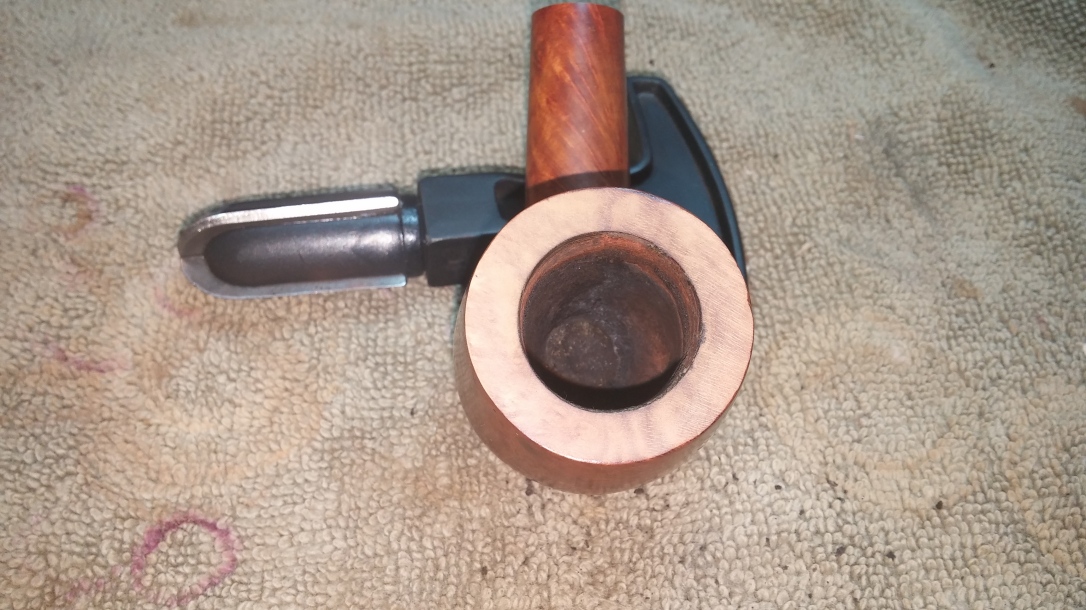 A quick look with a bright light showed that the airway through the pipe’s shank was blocked up with tars and debris. Rather than use a pile of pipe cleaners and alcohol to dissolve and remove the blockage, I expedited matters by twisting a 5/32″ drill bit through the airway by hand to auger out the offending material. With the majority of the blockage removed, I only needed a few pipe cleaners and cotton swabs to tidy things up. 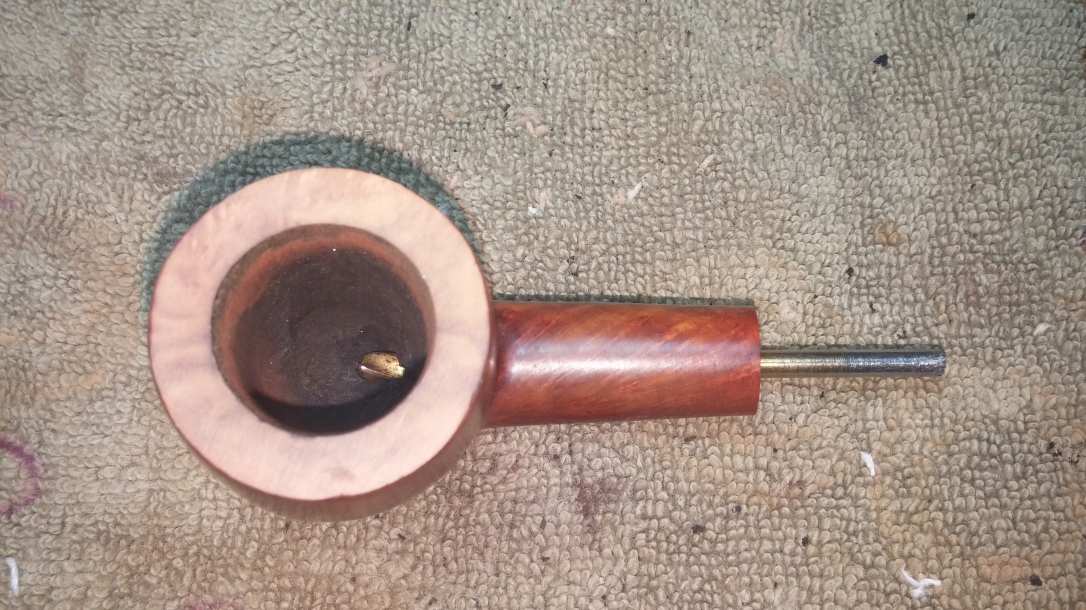 At this point, the stem was ready to come out of its Oxyclean bath. I scrubbed away the now loose oxidation and grime with 0000 steel wool and Magic Eraser. There were a few small tooth marks left behind after the scrub, so I drop-filled them with a mix of CA glue and charcoal powder. When the fills set, I filed and sanded the patches smooth, polishing the vulcanite with micromesh pads to 4000 grit in preparation for final buffing. 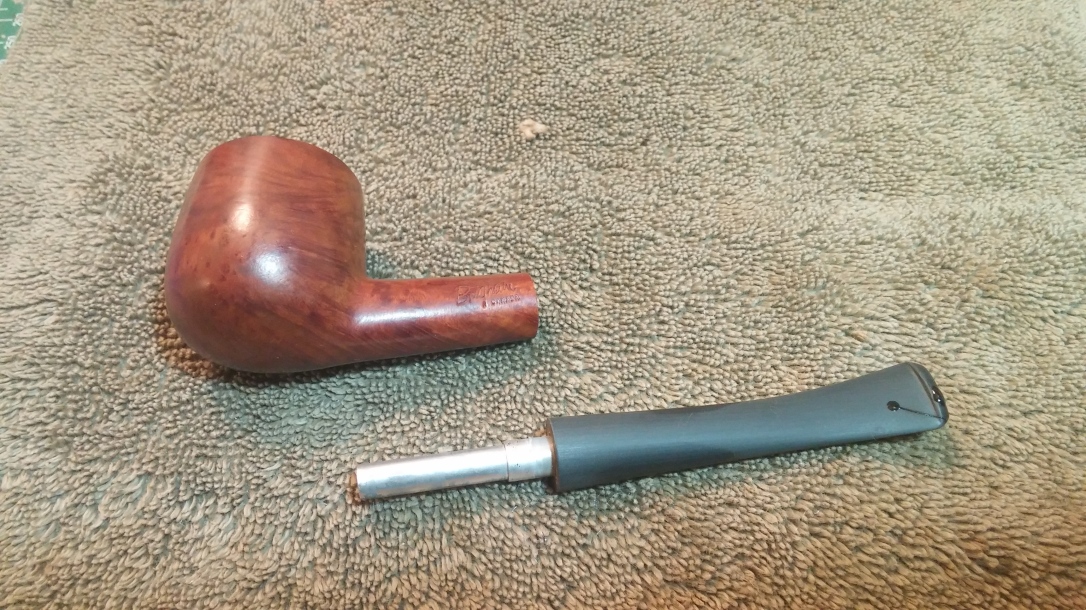 The exterior of the stummel was in great shape, with really nothing more required than a quick wipe-down with alcohol on a cotton pad to remove the old wax, grease, and dirt. The final task before going to the buffer was to refinish the freshly topped rim to match the rest of the stummel. I smoothed out the sanding scratches and polished the rim with a full course of micromesh sanding pads and then used stain pens to refinish the rim. 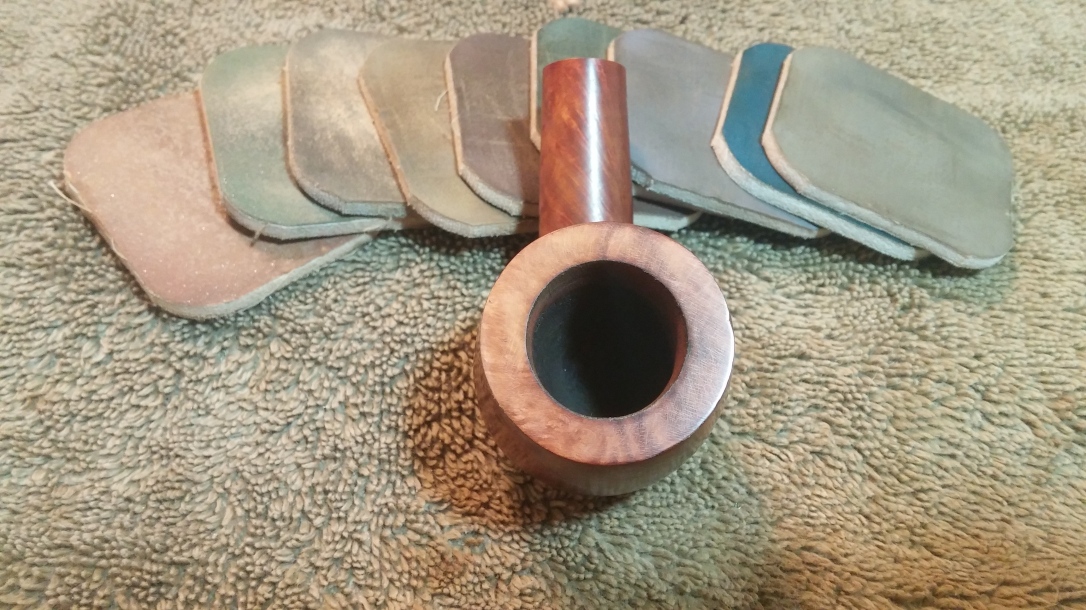 I took stem and stummel to the buffer for final polishing with White Diamond compound on the wheel followed by several coats of Carnauba wax to shine and protect the finished pipe.

This 1980’s vintage Brigham 454 was in good estate condition when I started, but I’m always impressed with the difference a basic cleaning and polishing makes to a pipe. This Bent Pot is looking fine, and the sharp lines give it a slightly rakish appearance that reminds me somehow of the Space Race designs fashionable in the 1960s.

I have installed this freshened 4-Dot Shape 54 in its place in my Brigham collection.

Thanks for joining me for this quick restoration. Until next time, Happy Piping! 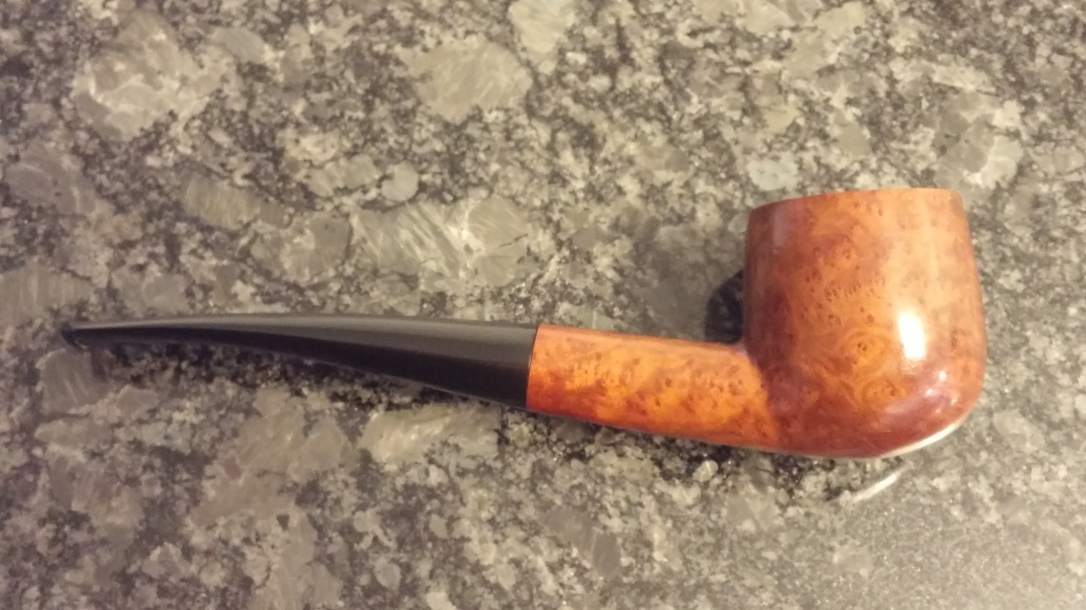 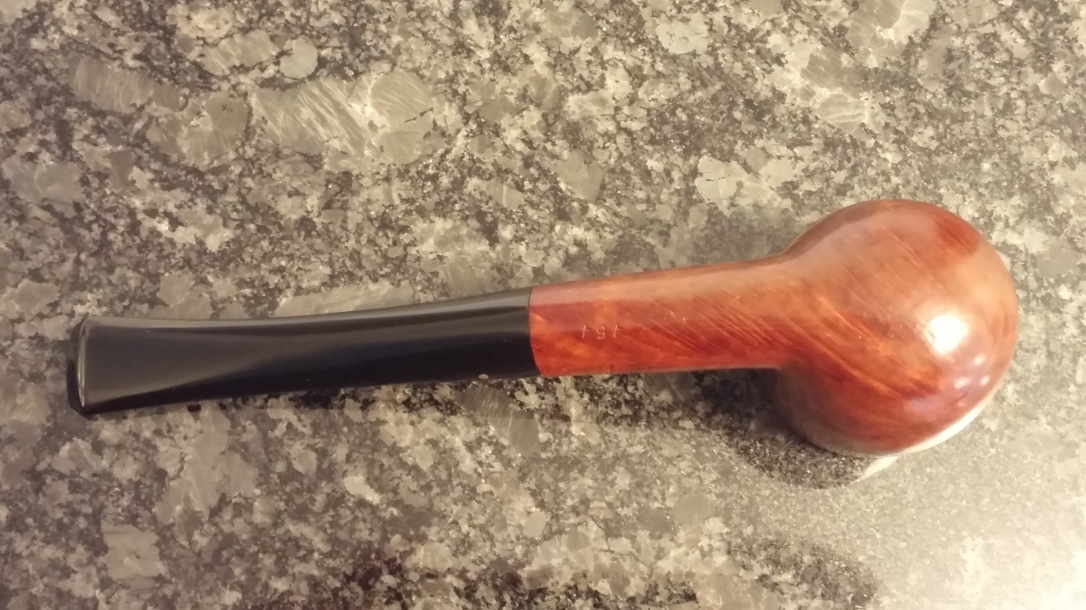 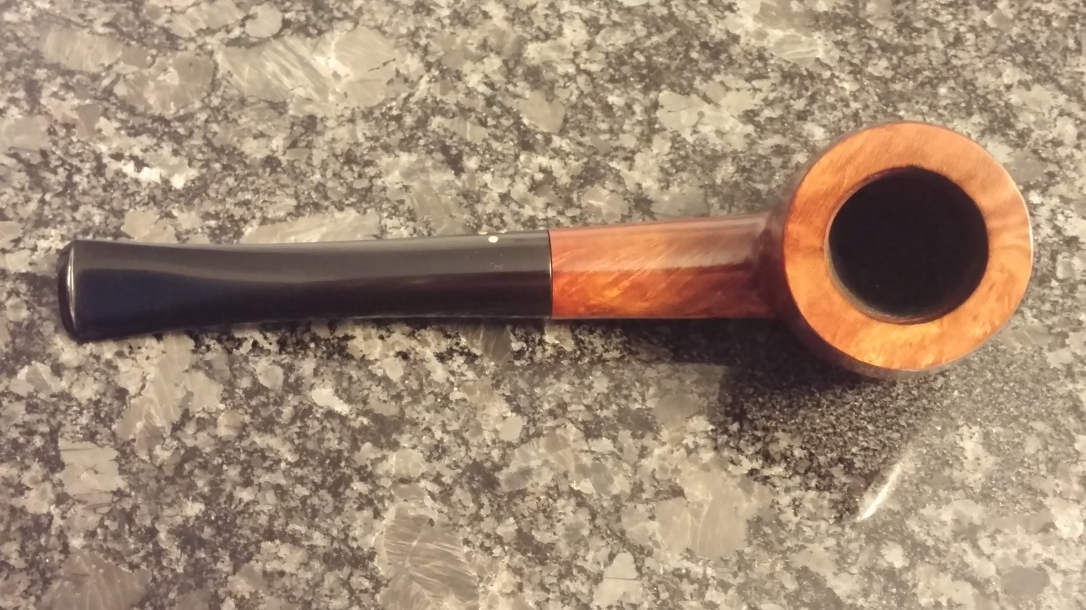 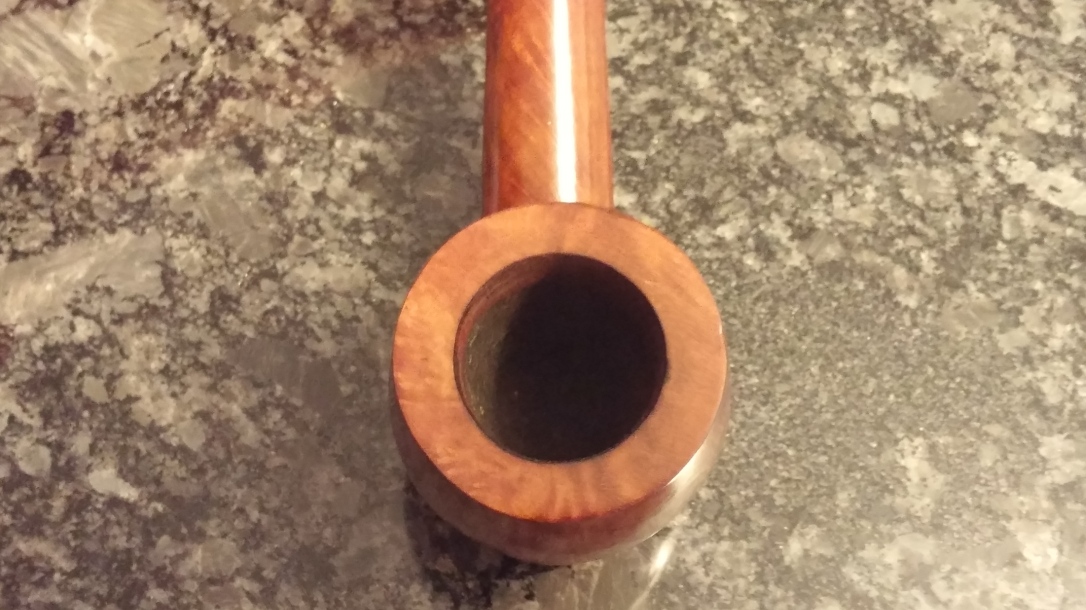 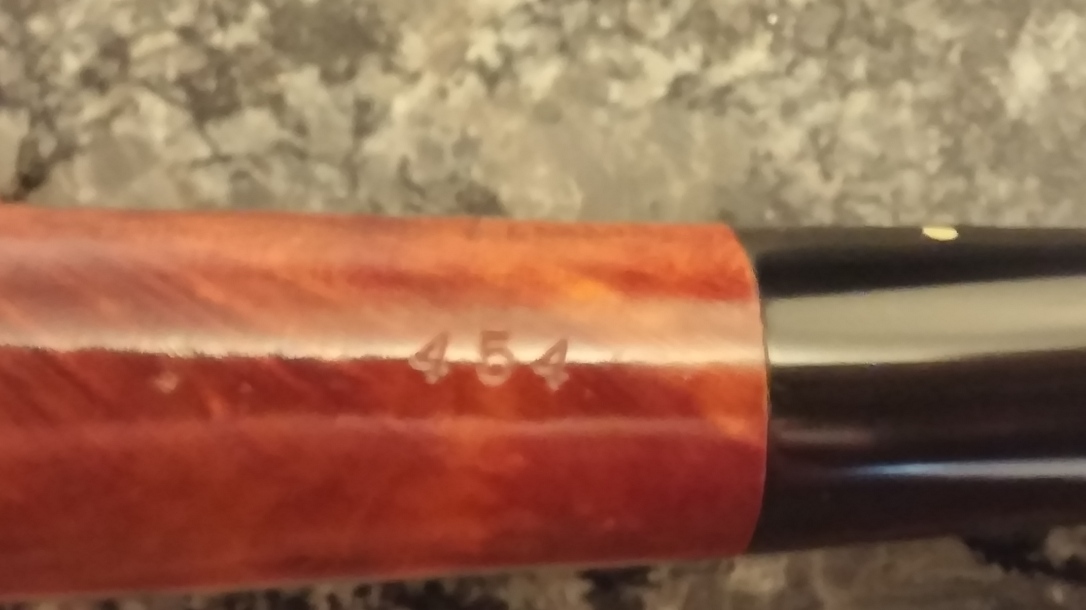 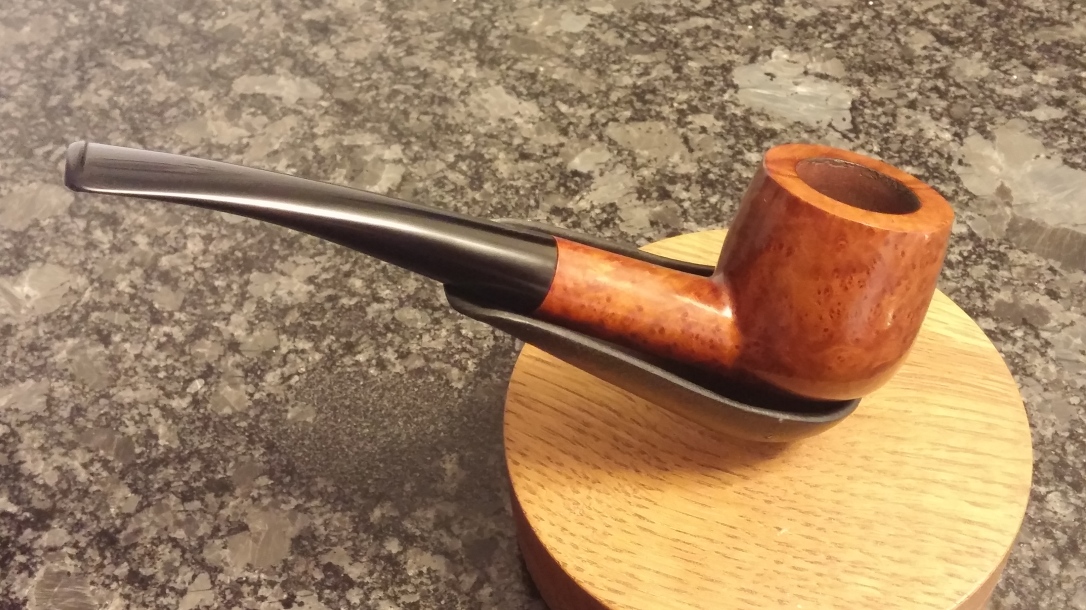